When you talk about Orbea bicycles and the Euskaltel team, it’s about more than light alloy and carbon; it’s about people, national identity, unity and pride. All this was evident when we met with Tomas, Euskaltel mechanic looking after a certain Olymoic Champ & GC contender’s bikes. We got up close with Sammy Sanchez’s new Orbea Orca.

On the Tour, many of the teams will have the team vehicles parked ‘wagon train’ style or have ‘crime scene’ tapes to keep the civilians at bay. Not at Euskaltel. Riders, mechanics, kids, old folks, journos, camera crews and anyone else who’s in the neighbourhood mill around in happy confusion – but the job still gets done. 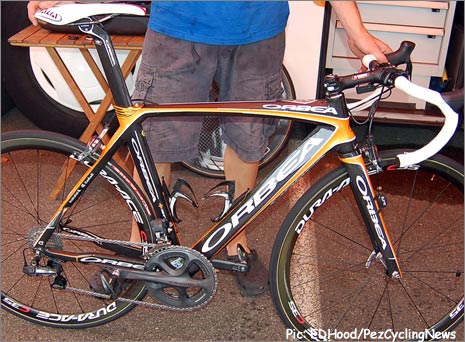 Sammy’s ‘B’ Bike – identical to the ‘A’ version, except a little less gold. He was riding his ‘A’ bike when we visited. 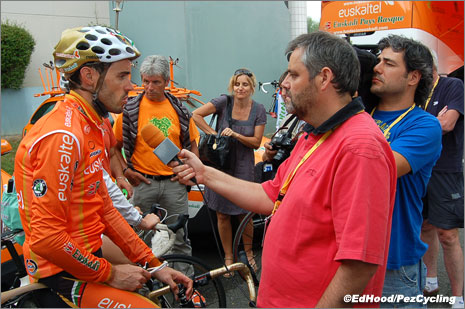 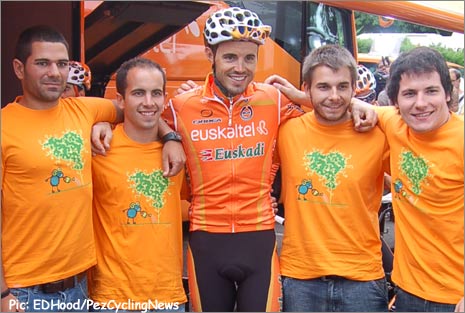 Unlike a lot of teams, Euskaltel fans are welcomed with open arms.

While the riders saddled up for their ride, fans filled the parking lot and mechanics were busy prepping bikes for the coming stages – rims get cleaned ready to accept cement, rims are cemented, tubs are stuck on and Orcas get washed. 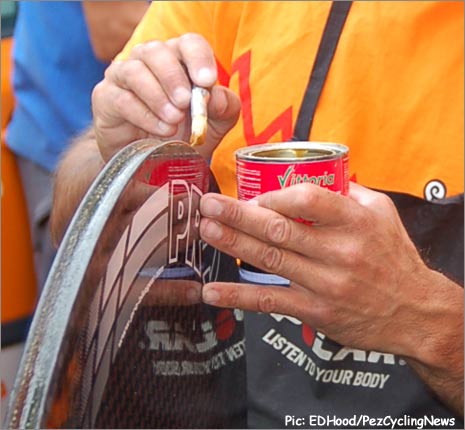 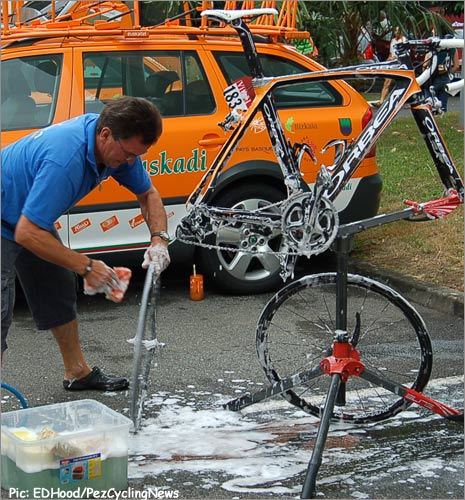 ‘Vamoose!’ The cry goes up and the boys are off on their rest day leg loosener, lead by Olympic champion, Samuel Sanchez. We’re here to have a look at Samuel’s gold high-lighted ‘Orca’ but since he’s just pedalled off on the beast; that will be difficult.

It’s no problem, head mechanic Tomas Amezaga tells us they won’t be long and gets us up to speed on the basics, using Sammy’s ‘B’ bike which has an identical position and apart from the gold high-lights, BB 30 bottom bracket and ceramic replacement bearings, is the same machine.

Pros must have identical positions on their machines, if the ‘A’ bike is damaged in a crash and the rider has to change to the ‘B’ bike, delicate knees will pick up any change in position, however slight, and a whole season could be compromised. 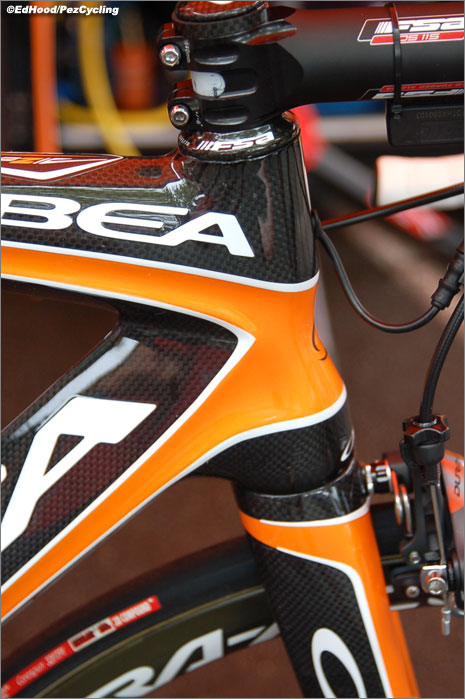 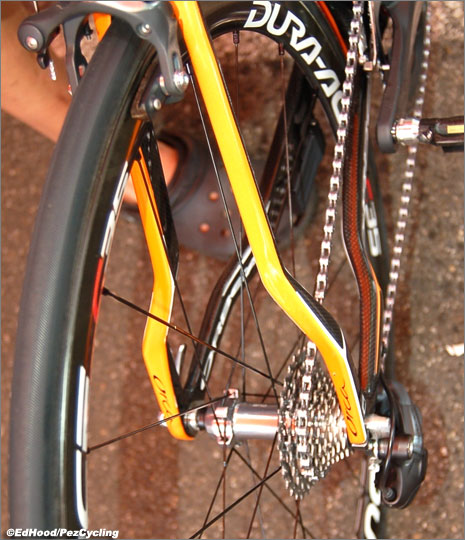 Orbea make the most of carbon by manipulating shape and layup to influence ride quality – but with a twist. While the seat stays may look at first glance like a simple zig-zag design, and may cause some of you to scratch your heads wondering how an acute curve will affect the ride – the short middle piece – the ‘zag’ if you will – actually twists as it transitions from lower stay to the upper section. It’s here that Orbea claim they’re smoothing the ride while maintaining the lateral stiffness most racers want. 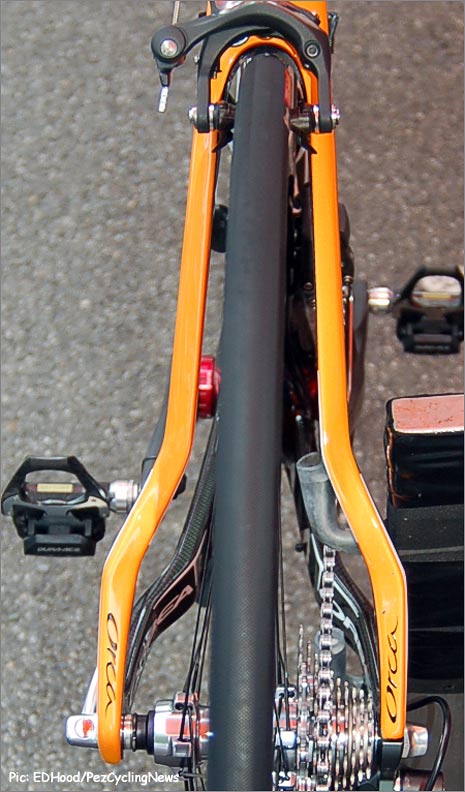 This design also allows for a narrow profile, reducing the area of the bike’s wind-breaking profile.

On the subject of aero, its buzzword time again, ‘AizonE’ is the name given to the aerodynamics package applied to the machine, taking it closer in spirit to a time trial bike with a claimed improvement in drag of 14%.

Perhaps the most striking feature is the cranked seat stay arrangement but the front fork blades – which have a carbon steerer – have been brought closer together and all gaps between the wheels and the frame tightened to improve ‘fluidity.’

‘Attraction’ is the name that Orbea have given their new tube design, claiming that it minimizes road vibration but leads to a more efficient laying down of power through the pedals. 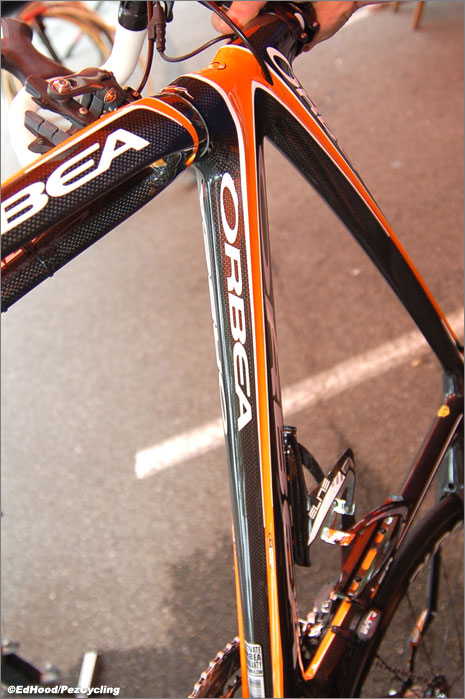 At this stage it’s time to throw in the second buzz word – SSN, ‘size specific nerve,’ a concept, where, due to the fibre lay-up, an Orca will give the same sensations to its rider whether it’s a 48 or a 60 cm frame. 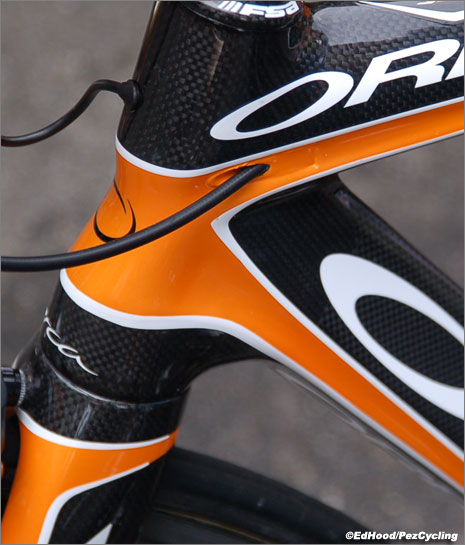 Cable routing is very neat and rear brake operation smooth; bizarre though it may seem at this level, when you give the rear brake lever of some of the big team’s bikes the ‘squeeze test’ the feel is spongy and the return slow and imprecise – not on the Orbea. 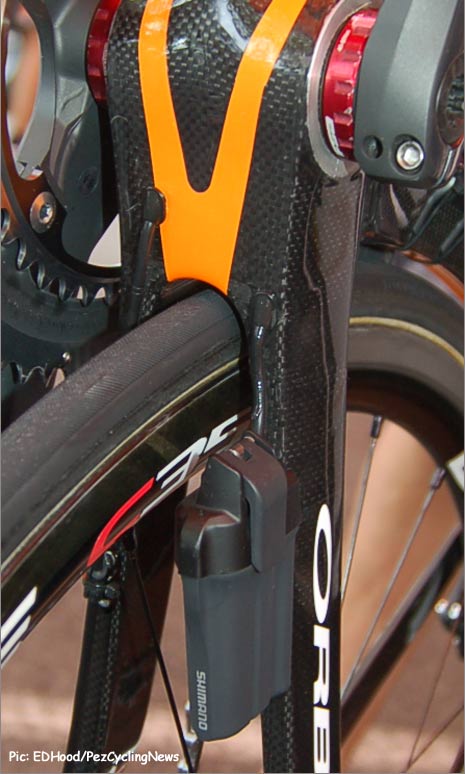 Note the DI2-ready lugs in the chainstays, and battery pack. 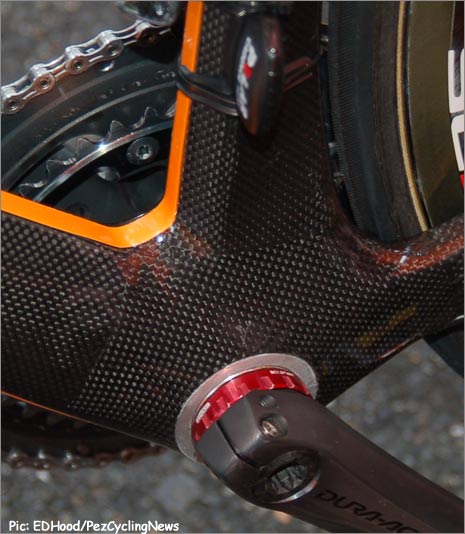 As regards the bracket, it will take BB 30 (below) or standard brackets (above) with the addition of an alloy sleeve – and don’t worry about weight, it’s down nudging the UCI minimum. 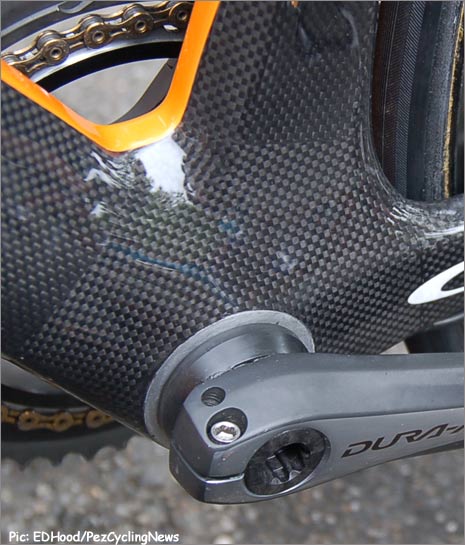 The pro team group set is by Shimano and incorporates electronic shifting, but regular folks can order their choice of the higher-end kits from Shimano and SRAM from Orbea’s custom ‘Made-To-Order’ program. 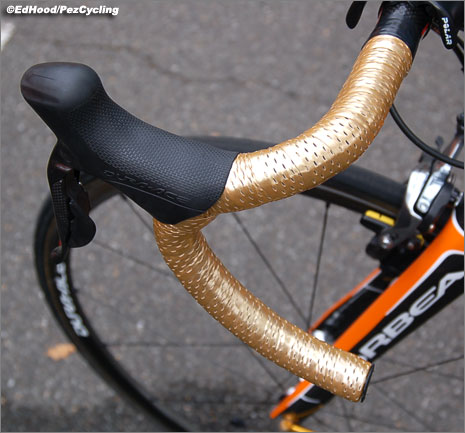 The gold taped deep bars accentuate what is already an aggressive position; ‘is he comfortable?’ is the obvious question for Tomas.

We asked Tomas if there were any ‘tricks of the trade’ necessary or quirks to deal with, ‘no, obviously we had to get used to it but once you do, there’s no problem, the riders like it and one advantage that I’ve not heard mentioned is that because the brake levers don’t have to accommodate the gear actuation they are narrower and more comfortable. 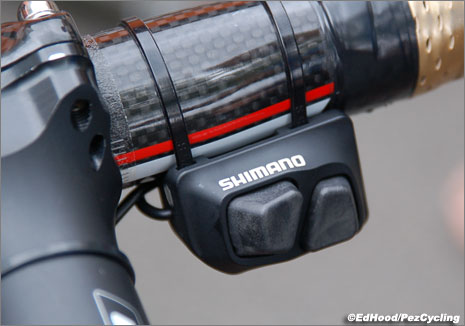 Samuel uses shifter buttons on the top of the bars so as he can change gears without moving his hands to the levers.’ Battery mount is below the chain stays – neat.

Back to the subject of hands, Samuel uses FSA bars and stem, with a deeper bend than is currently fashionable; bar width is 42 in carbon but because he requires a 14 cm. extension, this is in aluminum, carbon not being available above 13cm. 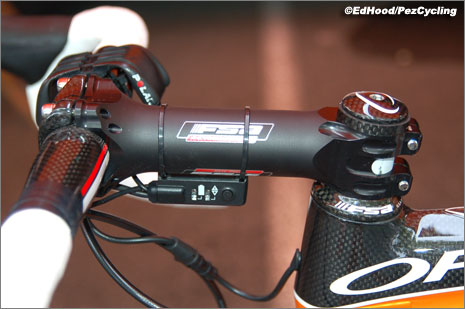 He explained that Samuel and team mate Igor Anton spent time in the wind tunnel in San Diego over the winter and their positions are aero, efficient and comfortable.

The Olympic champion sits on a gold Selle Italia ‘gel flow’ saddle, but the new Orca has been designed to run the Italian saddle-maker’s new ‘Monolink’ rail design, that actually stacks the carbon fiber rails vertically and is reportedly lighter and easier to adjust than traditional saddle/ seatpost combos. 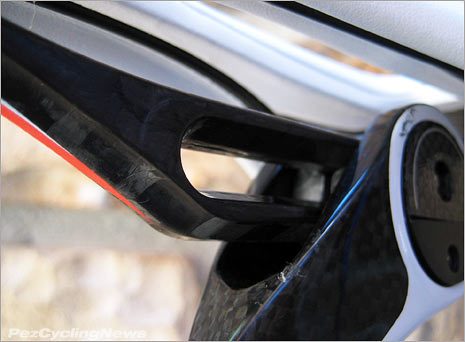 Orbea is the first bike maker to embrace the design and created their own special seatpost that can be ordered to work with the Monolink, or a traditional two-rail style saddle. 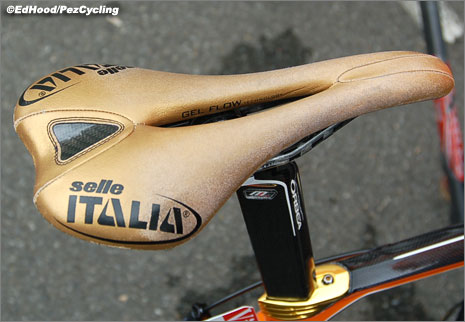 Sammy’s bike was running the traditional setup because his gold colored Monolink saddle had not arrived yet. 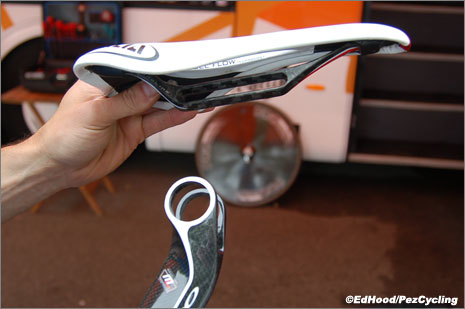 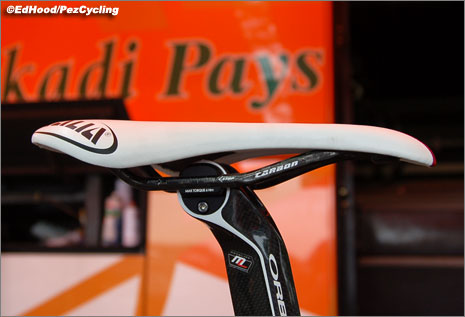 On the ‘A’ bike the seat clamp is gold – naturally, but customers will have the chance to order different colors for their own models. 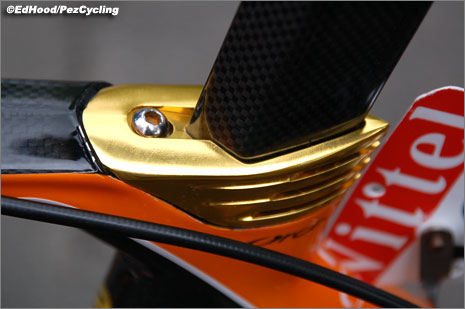 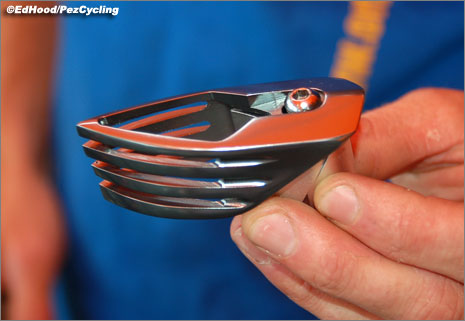 The drive train is by Shimano 39/53 x 11 to 23 normally but we were visiting the day before the Tourmalet summit finish and a 28 was going on at the back [Dave and I pondered the question; ‘if Sammy needs a 28, what the hell would we need?’]

On the ‘A’ bike the gold chain is by KMC and the gold quick releases by KCNC are in titanium – and match the drop out, hanger, and jockey rollers. 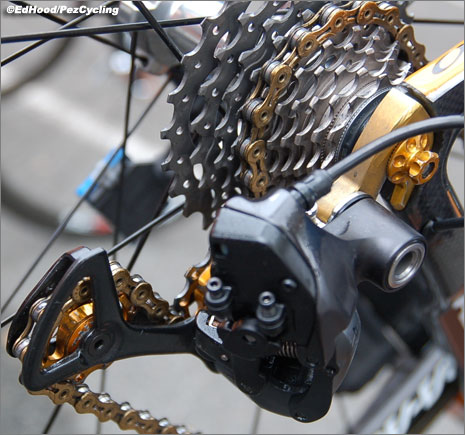 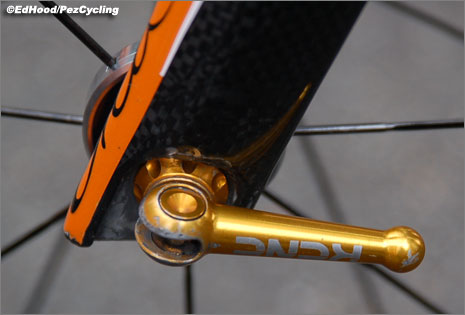 We asked for Tomas’s take on oversize rollers and he’s unconvinced – he doesn’t like the closeness off the gap between the sprockets and top roller in the smaller cogs and says that their research shows no advantage.

But Craig Geater, mechanic at The Shack reckons, ‘they save watts!’

Pedals are Dura Ace alloy and carbon and are stamped on by Samuel’s custom gold Sidis. 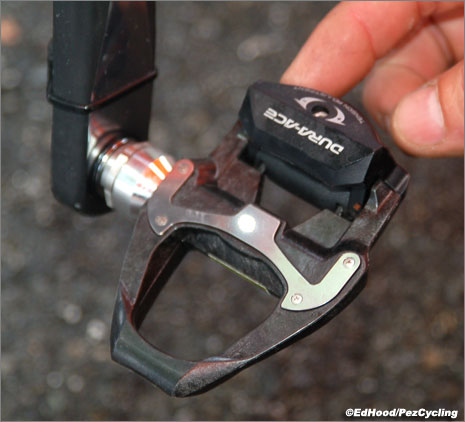 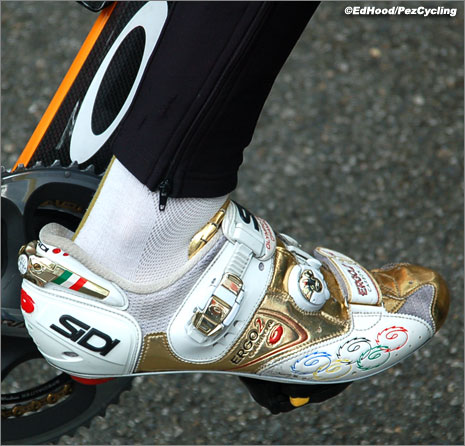 The Olympic theme continues on Samuel’s Catlike Whisper helmet, too. 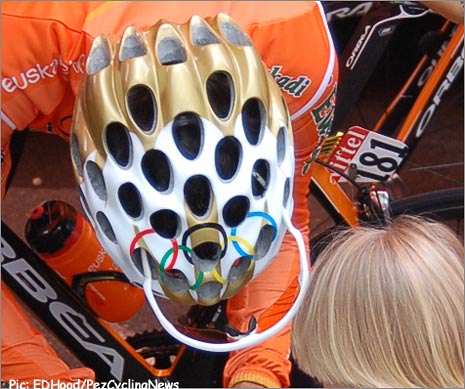 And it’s carbon that holds the bottles in place, courtesy of Elite. 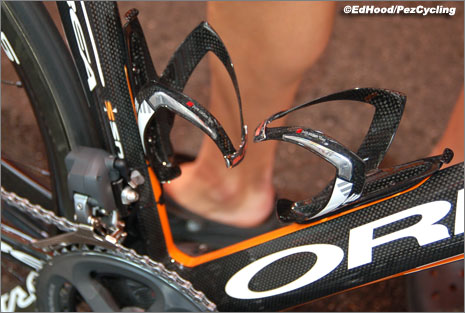 There were two more questions – Sammy wanted to know if he could use a different bike for the Tourmalet? 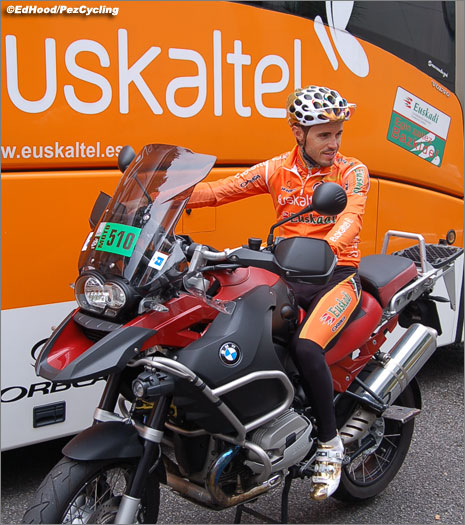 And secondly, when does my Orca to road test during my come back arrive?

With thanks to Tomas, Samuel and all at Euskaltel – but remember, he may be Olympic champion and mountain hard man to us, but he’s also just plain old ‘dad.’ 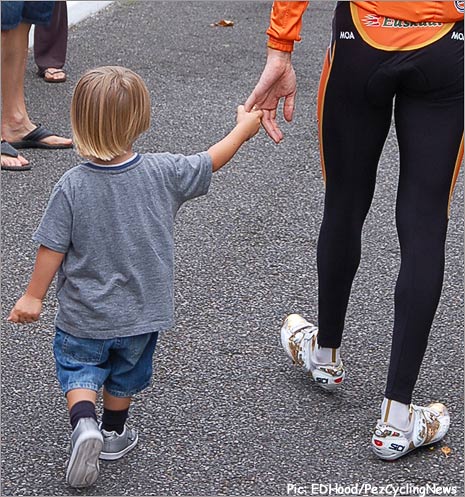 • Get more info and order your own Orca at ORBEA-USA.com.