For a lot of folks, the single ‘biggest’ new product at Interbike this year was the launch of SRAM’s new RED gruppo. Advancing the success of last year’s FORCE group, RED is lighter, and shifts up some pretty cool features the other guys don’t have. Here’s our first look.

I changed the travel sched and was Vegas-bound a day early so I could join the SRAM media ride at Outdoor demo to launch their new RED gruppo. But thanks to the long delays getting busses to the demo, I missed the ride after all. No worries, SRAM’s pr-honch Michael Zellman took me out for a personal tour of the surrounding environs, and a little one-to-one tutorial on the new group set. 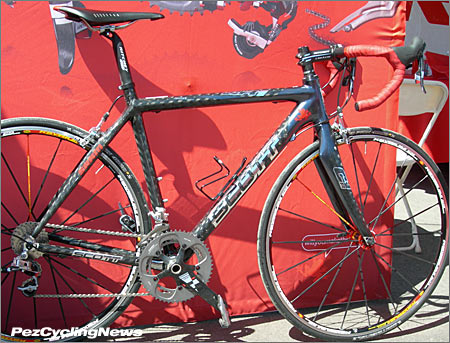 The PEZ test rig: Scott’s CR1 adorned in all RED.

The hour-long ride was just enough to get a feel for the new top line gruppo, and we’ll have a full review when we get some real miles with it, but here are my first impressions.

The FORCE gruppo was a solid offering last year, and not just because at last consumers had a choice beyond Campy or Shimano – the stuff actually works well. Sure it had a few flaws (minor ones), but SRAM apparently does pay attention to rider feedback, and have made some nice improvements in RED.

First impression, when you see the groupset on a bike is ‘hey – they let the graphics guys in on the action here!” Not content with unbadged parts that look too much like everyone else’s group, SRAM has left no surface unadorned with the new RED branding – shift levers, crank arms – both inside and out, even the inside cog of the cassette body has the big RED logo emblazoned. 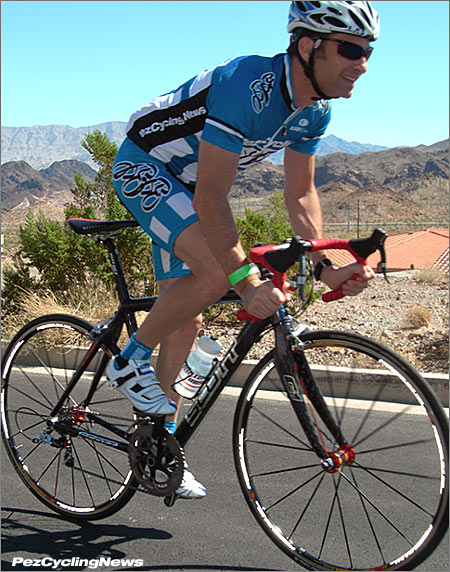 Let’s start with the controls and work our way back.

Although the shift and brake levers are slightly longer than Force, the molto-sweet ergos do not change, which is one of my favorite features of Force (and with riders I’ve talked to), but the shifters get two big improvements. First on the list is a trim position for the front changer (and ALL their groups should get this). The next thing is the adjustable reach for levers on both sides. 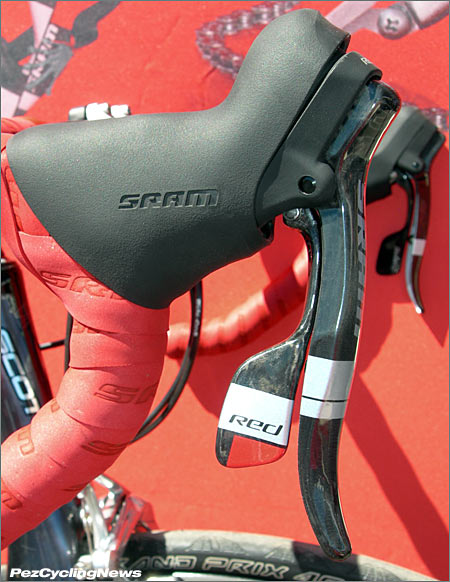 Finally we get road levers that can be set to different reach lengths, to suit various rider preferences. Why no one did this before is a mystery to me, but kudos to SRAM for providing an obvious benefit to riders with smaller hands. Both brake levers and shifter paddles come with adjustable reach.

The first adjustment needs to be done to the shifter paddle and when set “all in” the gap is pretty substantial (relative to the already friendly ergonomics that SRAM bring). 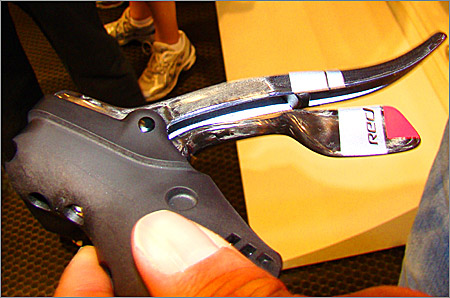 ”Mind the gap” between the two levers – this shows the shift lever set at a shorter reach position than comes stock.

SRAM describes the brake lever adjusters as “Infinity”, which near as we could tell actually means that massive void some place less than a half an inch, but the adjustment is pretty simple requiring not much time at all… 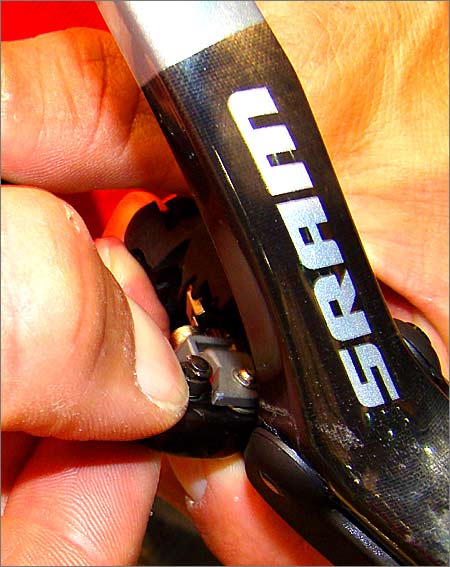 The shift lever reach adjusts via twisting that cam-style roller to 1 of 3 positions.

Additionally, they’ve added a cable routing option so you can run both cables on the front of the bars without that awkward bulge over the top – and they’ve reduced the weight by 10% over Force by using more carbon in the levers and hoods.

SRAM has also added something called ‘Zero Loss Travel’, which essentially tightens the tolerances of the shifting mechanism, so shifting feels faster engaging and ‘snappier’ than before.

DERAILLEURS
Both front and rear derailleurs get some tweaking with new materials, lighter weights, and a new trim position on the front. 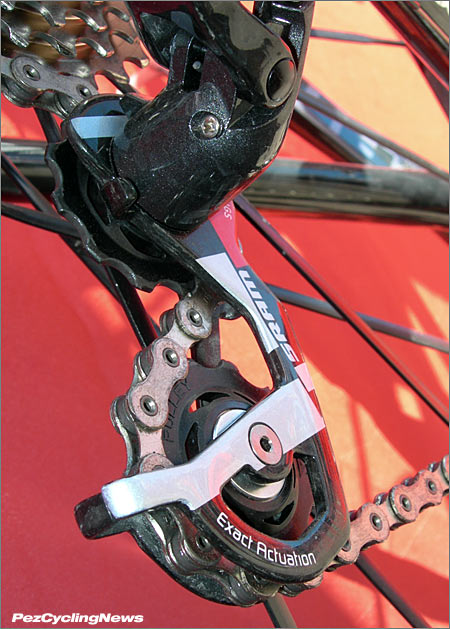 The RED rear derailleur now runs ceramic bearings in the pulley wheels to reduce the drag on the drive train.

The front derailleur lightens up by 30 grams over FORCE with a new hardened Ti cage attached to the aluminum body. The shifting action now has added a trim position for big ring and eliminated the trim o the small ring. SRAM told us this was in response to riders like David Millar, Gilberto Simoni, and Ben Jacques-Maynes wanting a bit more flexibility in the big ring, where they spend most of their race time – and it makes sense for a high-end groupset aimed at racers and performance-oriented riders.

The OG-1090 CASSETTE
The other area of significant improvement is the cassette body. The just-too-heavy FORCE cassette body was considered by many the gruppo’s weak link, and SRAM have stepped up with a cassette body they claim is: ”10% lighter, 35% harder and 100% stiffer than competitor’s titanium models.” – not to mention way lighter than FORCE. 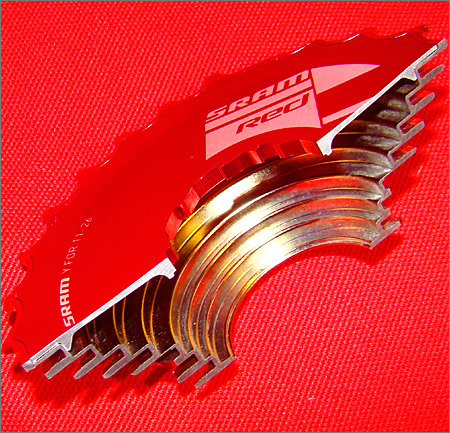 It’s machined out of a solid block of heat-treated chromoly steel. The principal is simple, and less dramatic versions of solid piece cassettes have come before from KCNC etc, but SRAM definitely takes it to the next level. The big question from the public is “will this eat my freehub body”. SRAM says absolutely not. One thing’s for sure, this is a HUGE step down in weight from the force cassette (Red: 155g (11-23) vs 210g for the Force), and a huge step up in sexy… (it will also provide for some good “hidden rattle” practical jokes from mechanics). 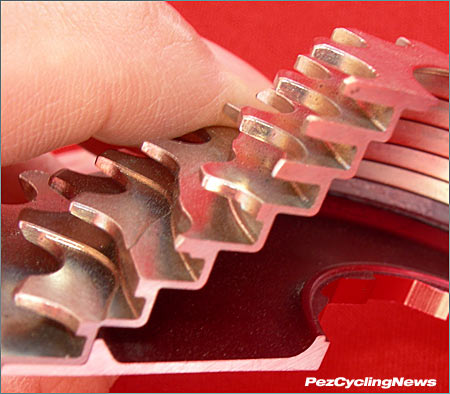 BRAKES
The RED brakes pick up some cool features along with reduced weight (15grams lighter than FORCE) thanks to machining out some unneeded material. 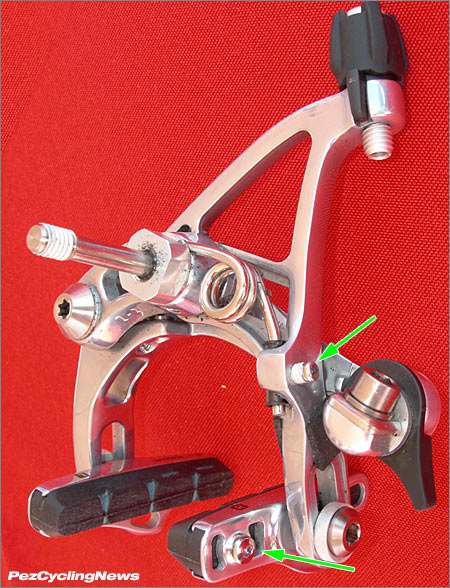 The adjustability goes up a couple notches too, with the addition of adjustable spring tension, and a way easier to access brake pad bolt. Changing brake pads on the Force version is so cumbersome that I actually tossed the bolts from my test set, but the RED brake shoe bolts can be easily accessed while the brakes are still mounted to the forks.

The dual pivot design is said to improve modulation and overall braking – but we’ll wait for the long test to comment on this one.

CRANKS
You sharp-eyed readers saw Charles peek at the cranks in our first Interbike story, and although the weight remains changed from FORCE, the graphics and ceramic bearing hubs really up the cool factor… 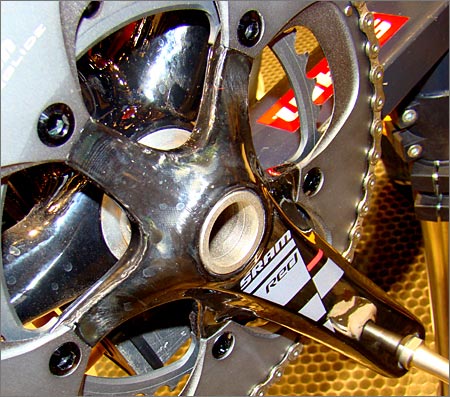 “Carbon arms and spider and new chainrings at the very least are a visual statement versus their Force set and are a respectable 760 grams for the full unit. These also go with Ceramic hybrid bearings to deliver the drive to the newly designed cassette that is visually one of my favorite parts at the show this year.”

And in case you wonder where the whole Frog / Make the Leap thing comes from, it’s in the exceptionally simple/smart/durable shifting design where directional cable changes can be made using the single cylinder because the two engaging levers simply hop over each other depending on lever throw distance. 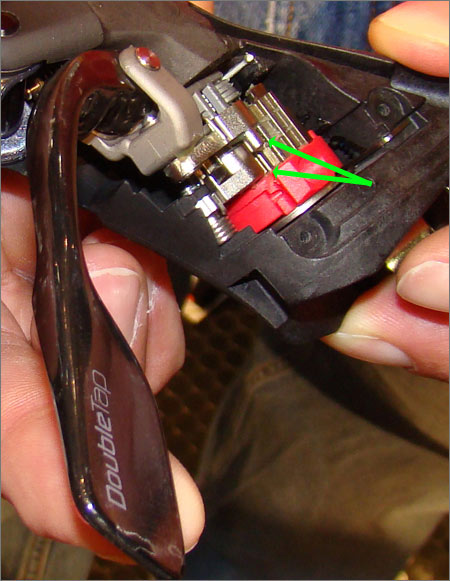 What’s the Ride Like?
My initial ride was a short one – but even the first couple of shifts were telling. I’ve been riding FORCE continuously for the past 6 months, and I found the feel of the RED front shifter to be noticeably crisper and more precise. There’s nothing wrong with the front shift system on Force at all, but I’m always impressed when I can actually feel a difference.

I also liked the adjustability of the lever reach – my test bike had been set up with a shorter reach, which was perfect for my hands. I especially liked that I could reach the brakes easily from the drops – and combined with the ergo-edge on the outside of the brake levers, using the brakes from the drops was easier than it’s ever been.

The front shift system has been my least favorite part of FORCE. I’ve found the throw to go from small to big ring to be further than I like, and the heavy spring requires a lot of force to overcome. Finally, the 1 trim position on the inner ring has proved limiting in some gear ratio choices. I’ve learned to live with it and and adapt my shifting accordingly, but I’m excited about the fact that I’m not the only rider voicing these concerns, and that SRAM is making improvements. My ride at Interbike was not enough to really soak in the subtle changes of the RED’s front shift system, plus my test bike was equipped with a 53/39 front chainring, while I normally ride 50/34. I’ll hold off on judgement until I can really evaluate it in my normal riding conditions.

Overall the RED is an improvement on an already good groupset – that much is plain to see. It’s lighter, the adjustable levers are very nice, and it’s great to see SRAM striving to make their groupset better. The new RED weighs 1928 grams (reported) vs 2082 Force – that’s a 154 gram difference for those of you keeping score at home.

Rest assured, once we get our test units we’ll be back with a full evaluation.

But RED is not exactly cheap – expect to pay close to US$2142 (msrp) for Red, while Force will run near $1428 msrp (although better prices are already showing up at places like CycleCo.com and GloryCycles.com.

Toolbox: Tapering to a Razor’s Edge