The good folks at DMT and their North American Distributors at Upland Sports Group took offense to Pez’s complaint about all the nice stuff in cycling costing so damn much. With a firm “So there” they sent us a set of shoes that are a few notches from their top cost to let us know that “trickle down” technology at DMT doesn’t trickle very far… 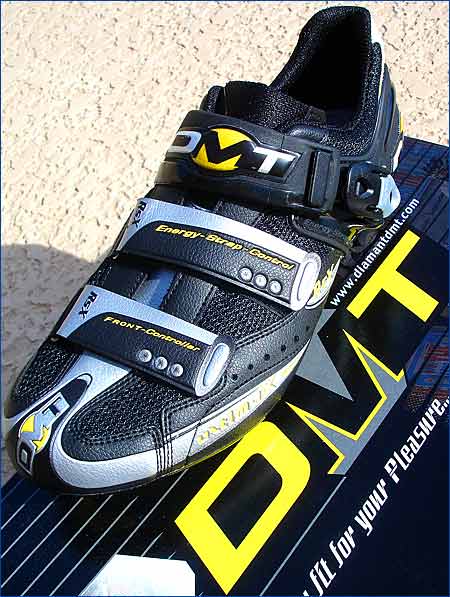 A few years ago, DMT were the new kicks on the block. Federico Zechetto’s Bonferrano Biciboots started to see their first feet back in 1995, but it was really 2001 that saw DMT making a North American dent. That shoe was their Ultimax RSX and I remember it was a great shoe to look at without being too over-the-top loud. Simple black and white, but with a nice pop.

Since then, DMT have had a few updates to the shoe and their Ultimax RSX is a good looker and very functional, and it’s a logical place to start this review, as we were sent it’s less expensive cousin, the Ultimax Spirit RSX. 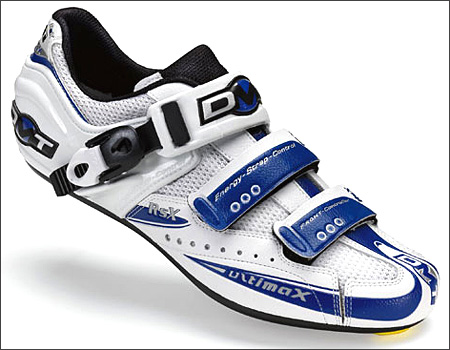 At a glance it’s pretty easy to confuse this shoe with its wealthier counterpart for one simple reason… It’s basically the same shoe with a different sole. 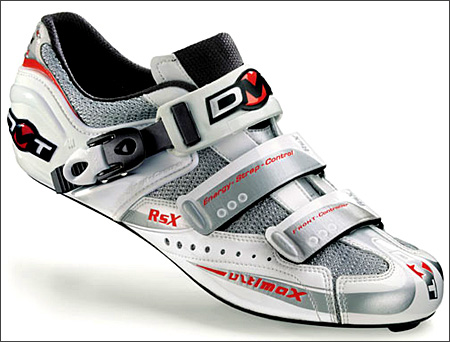 See the HUUUUGE difference in the photo’s above? (other than color smarta#*)

The Ultimax Spirit RSX (Spirits from here on…) is a well put together shoe as features go. DMT started using a one piece heel cup and strap design a few years ago, and it’s darn good thinking not to have messed with it much.

The heel cup extends from the inside of your foot, out and over in one uninterrupted piece. That’s nice, as it eliminates any junctions from one fabric or part to another, thereby eliminating the possibility of the shoe coming apart under any normal conditions and also eliminating any need for stitching or hard parts that, when pulled tight, might create little sore spots. 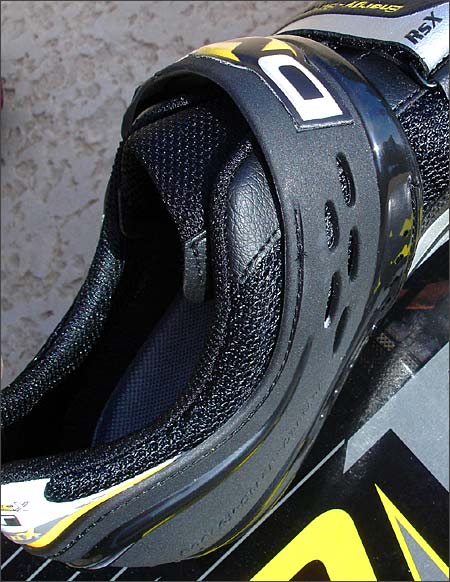 Another nice feature is that the strap itself that enters the ratchet type adjustment buckle is replacable. As this is a part that can take a lot of abuse, that’s smart design too. 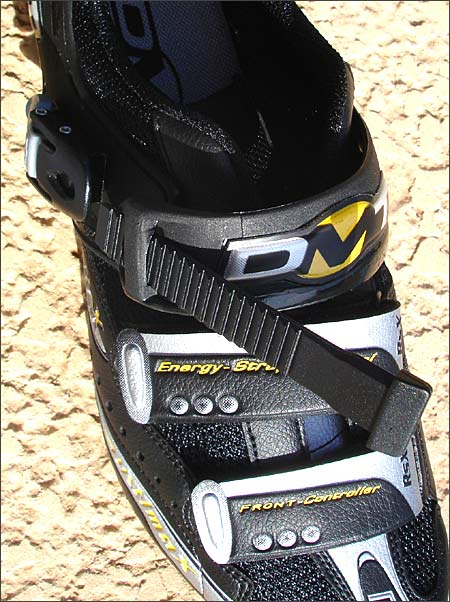 The heel cup extends out on the outside of the foot beyond the buckle that mounts to it. You’ll also note that the cup itself is shaped to allow free achilles movement but still hold the heel snug. 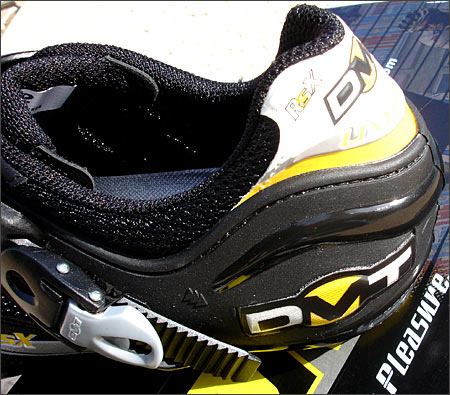 The buckle works really well. Winter gloved or not you can easily snug things down (even in Lycra booties…). 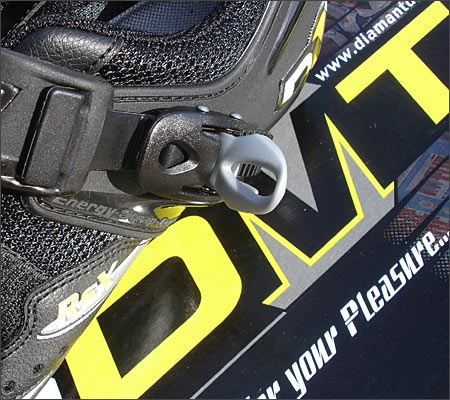 And letting off a little is a tug the other way… (Also easy when gloved). 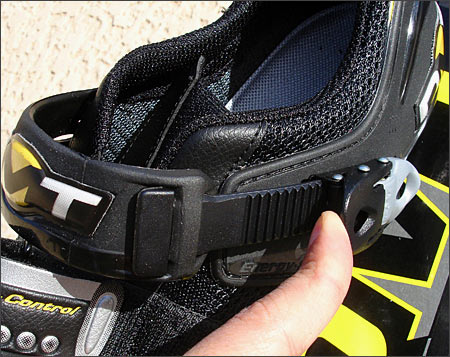 The closure system in total is what DMT call the “Energy Strap Control” system. Everything not covered above (meaning the other two straps) is called the “Front Controller”.

We call it eh, velcro…

Hugely interesting stuff as you yank it and it opens. Yank it – snug it then smish it back down and it closes… Marvelous. 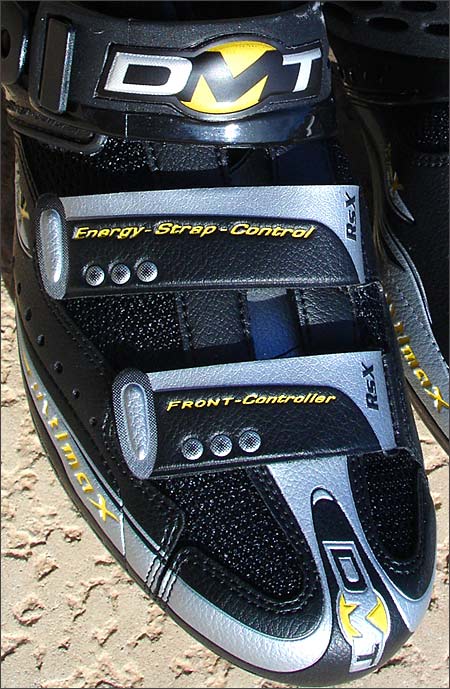 The rest of the shoe is what you would expect from a top line shoe. Plenty of breathable mesh in the upper. The same high quality fabrics as found on the upper of their upper class kick.

So what’s the difference with between $189 for the Spirits and a hundred or so more??

For your friends to know you didn’t pay top dollar, they will have to basically flip you over and see you feet up (not a problem if you ride with my group…). And pay attention to that 189 number rather than the savings from the RSX to the Spirit, as DMT forgot to charge another 30 – 50 bucks for their top of the line too… 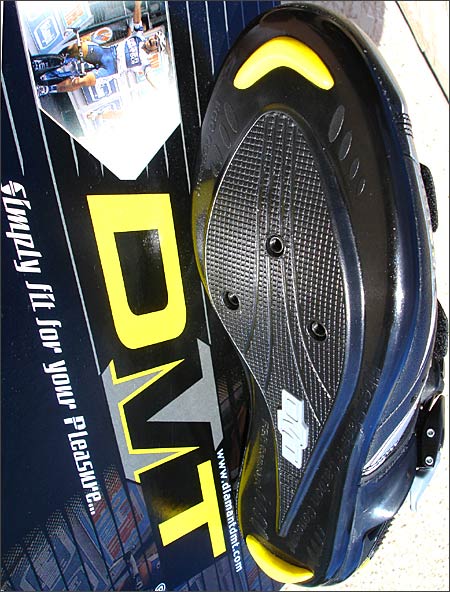 The Spirit’s sole is made of Nylon and Fiberglass. It is a material composite. It’s neat looking and black (complete with molded checks). It’s shaped just like the high dollar sole. It takes a three hole cleat. It has those little non slip things that, just like everyone else’s shoes, don’t help until just after you’ve made a fool of yourself. Other than that, they’re not Carbon Fiber…

The composite soles do have a bit more flex than their Carbon counterfeet. You won’t notice the change unless you toss lots of watts and love a super stiff sole, plain and simple. If you have biiiig power AND like a super stiff sole, you might want the top line Ultimax RSX.

I am wincing as I write this part, because about 99.8% of you will say “I have biiiig power” to yourself as you read this. I know some folks that have big power but still like a little give in their sole too. The Spirit’s will be more than adequate for most, especially as they only have a three hole opening and Delta cleats create less hot spots than some others…

I guess I should try and BS you about the toe box being “roomy”, but roomy is relative to your feet and I don’t have your feet. I do however have 14 pair of high end road shoes no older than 2 years sitting around here. With that in mind, I could say that the fit is about average for most high end Italian kicks. It has room for some foot beds (for my feet anyway) and as I have a wide foot relative to the rest of the world, I would not say these were overly thin. Bottom line is you shouldn’t listen to anyone about how shoes fit, you should go try em on.

The finish work on these shoes is VERY good. As good as any shoe in from the mid $200 range on up… They come in a white/blue and a black and run the size range from 37-48.

Ring your local shop for a shot at trying on a pair. If they don’t carry DMT, try Upland Sports Web Site. Upland also feature super skins from Bergamo (Pez’s corporate kit) and Capoforma and you can find a dealer there, or…