The Compact Revolution is here, so say us and a few others. And joining the fight are SanFran-based makers of stuff that’s better than it used to be – Interloc Racing. We take a closer look at their Mosaic C compact cranks, CD compact front derailleur, and Elite rear cassette.

By Tad Hughes
Imagine standing at the Departure Board in the airport with a first-class ticket clutched tight in your hand. As you watch flights and destination cities flash and change, you ponder the possibilities. A seemingly endless list of places scrolls by, so fast and in so many different directions, you are overwhelmed. Should you revisit a favorite destination full of good memories? Or, for once in your life, take the road less traveled in search of new adventure to bring all your climbing and spinning fantasies to life? 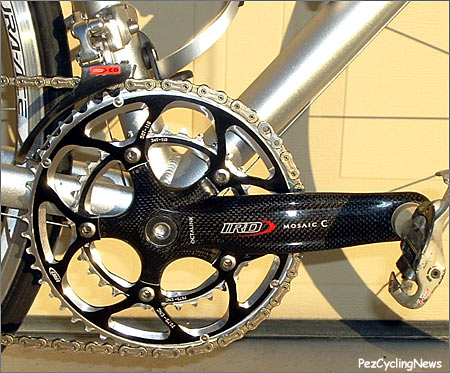 Having been around bikes the majority of my life sometimes I feel as if I am being sent a product just to say “didn’t we try this already?”. I remember Biopace, and the original versions of compact drive from the land of the rising sun. I remember the conspiracy theories that they were only designed to burn up chains and cassettes and offered little or no value.

Why Compact: It’s A “Little” Scary
My initial feeling with the “new” compact revolution was confusion. I don’t live in the mountains, and I don’t need a triple – so where does that leave me? I live in rolling terrain, with no need for anything more than a 25 tooth in the back. At first I had visions on being shot out the back of the group as it was wound up on the flats, or not having enough “meat” to spin up when exiting corners. Or worse yet sitting in the lowest gear turtling on climbs simply because it was available.

Well this, my dear friends, was my dilemma while gazing upon the box of goodies that any die hard hot rod cyclist would love. But thinking outside of the box in the end was something IRD and I have in common. 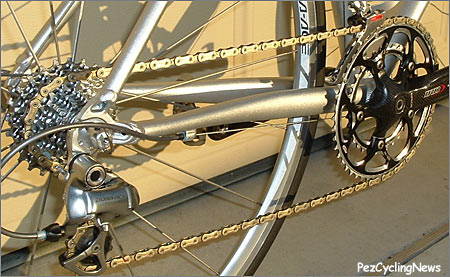 • The gleaming glory: you sure you want to get that dirty? The IRD Elite cassette powered by the Mosaic C compact cranks. And someone’s legs.

IRD Who?
IRD is short for Interloc Racing Design, who’s mission is to create the highest quality and affordability on products overlooked by the majors or that could be improved in their current state.

IRD began back in the day (think MC Hammer and tight-rolled parachute pants) in a small machine shop in Winters California near UC Davis – quietly turning out seat posts and other needed quality niche products on the brink of the MTB revolution. They were a soulful reflection of the rider who hand selected every part, and meant it. They set out to explore products based on need, and didn’t apologize for building quality over compromise.

Fast forward to the present and the box before me… IRD founder Rod Moses has been nominated to the MTB Hall of Fame, and Interloc moved uptown to the San Francisco / Bay Area but the original spirit of doing high quality and high value still remains. 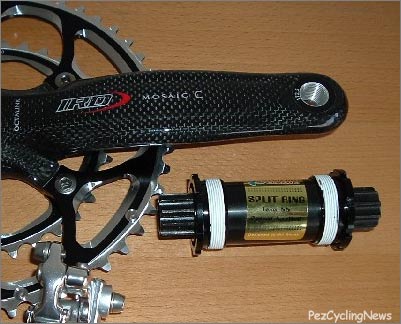 TELL ME WHY COMPACT
For IRD, building a Compact Crankset was a no-brainer. Although other aftermarket component makers were making them, neither Shimano nor Campy made one at the time, and it served dual purpose for IRD’s cyclocross market as well as the triple/ recreational/ gran fondo crowd, so it fit perfectly into their mission in life. IRD reportedly also made the first derailleur specially for the compact cranks – how about that?

The gleaming transmission begged to be built, but the intention to me was still unclear, Compact cranks… even though the evidence in favor is piling up:
• winning TDF mountain stages (remember Tyler in ’03?),
• sworn on by the Italian Gran Fondo pros
• the “hot” alternative to a triple chainring, now being produced by folks from the big three (yes SRAM counts) to FSA, TruVative, Deda and more.
• the gear ratios can place less stress on your knees
• lighter than a triple
• fewer jokes from buddies than riding a triple

… But would they make sense for a Texas boy like myself – ?. 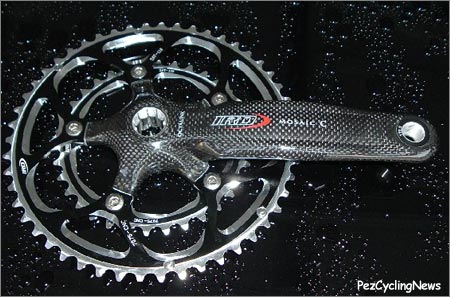 Gear Ratios…What?
I feigned concern that I would get dropped in non-mountainous terrain, but PEZ himself assuredly pointed out that the gear inches are very close to the same from my current standard setup… What’s three teeth? The Compact setup gives you virtually as much top end, while adding a couple gear options at the low end, all in a smoothly shifting 12-25 cluster.

Here’s the math – I’ll try to keep it simple so you don’t glaze over: total range of gearing options is just slightly wider on a Standard 53/39×25 – offering 6.00 meters in total gear range (the gear length difference from the highest to the lowest gear ratios) while the Compact comes in about 2 inches shorter at 5.92 meters total range – like you’re gonna notice the difference.

So you do a Lance, spin slightly faster, and never lose the front of the group.

To find the equivalent gearing in a 39, you’d need a rear sprocket between 28 & 29 teeth – and that makes for some big gaps between teeth on the cluster.

In the middle you gain a couple more useable gears because of less overlap of the big chainrings. Overall you get a wider gear range out of your existing cogset.

If you’re already a strong rider, you’ll probably spend more time in the big ring – how cool is that? When you do have to shift down the 34 the closer ratio allows a higher cadence. Coupled with a straighter chainline than a triple, and a few links less of chain, you’ve shaved some weight too. 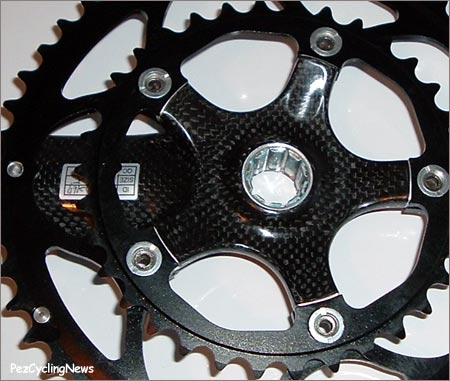 Just the Facts
The Mosaic C. Cast is a one piece drive-arm and spider made from the high-modulous carbon over a CNC’d hollow aluminum endo (inner) skeleton. It was plenty stiff and reassuring to us old timers suspicious of all-carbon, not to mention creak free and resplendent in a wet look clear coat so nice you are mindful of where your heels are. Within IRD’s machining heritage is evident in the aluminum inserts and the quality threading.

Examining the 50t/34t rings they almost looked fragile from the scallops on the front, but the backside shows it’s true company colors with four pick up points including pins upon a thick flawless aluminum. I was reassured by the Isis Bottom Bracket from American Classic because I have always been a fan of their stuff. Like the uncle that was a mailman braving the harsh winters that won the lottery, American Classic now enjoys the warm Florida breeze and year round riding, and they deserve it. 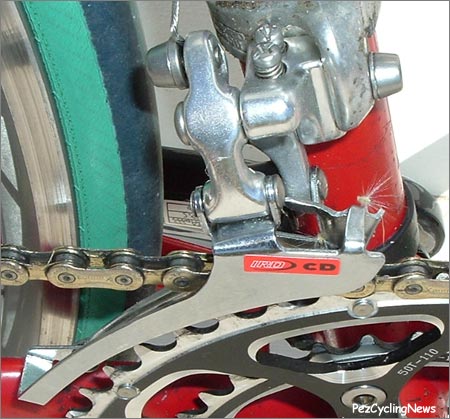 The front derailleur reminded me of a bulldog, just mean and stout, and like the rest of IRD speaks both Japenese and Italian, that’s a pretty smart dog. The cage here is compact with less overlap and tight tolerance to the rings. Almost guarding the obvious crown jewel… it worked though, as dropped chains never materialized.

LET’S RIDE
Funny how a new drive-train can breathe life back into your tired steed,or tired mind. Immediately I felt as if I was on crack, the accelerations made me giggle. I gave it a couple of days to get used to the sensation before my next group ride. My fear was getting spun out and poof! Piano!piano!

But what I found was the opposite. Noticeably responsive, at 545 grams the compact cranks somehow gave me the “no-chain” sensation of being faster. Coupled with the ease of spin they gave me from the cnc’d rings and the sensation of a tighter ratio when climbing, and with higher cadence provided, almost made hill-work fun, almost. 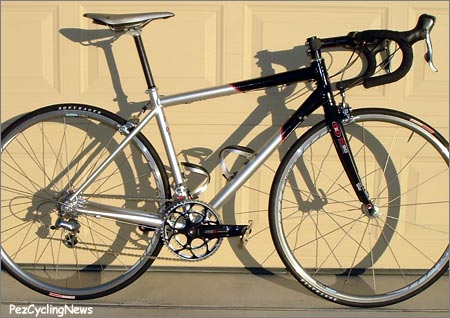 The finish quality of IRD’s gear makes a nice addition to any bike.

The crank and bottom bracket combination proved to be stiff and strong with no creaks or mentionable moans. I recommend investing in the specialty bottom bracket tool for those of you installing or doing maintenance yourself.

My chain-line stayed fairly straight and efficient, and having more of a midrange of gears seemed to ease accelerations out of the saddle and corners. The compactness of the set-up gave the impression of stiffness as the smaller 110 circumference bonded to the drive arm leaves less exposed spider to flex.

The IRD Elite cassette resembled a chrome plated Ultegra model and performed flawlessly on both Shimano and Whipperman chains but with the latter it has a really cool race-notchy feel. With an extruded machined carrier for the bottom three gears combined with the quality of plating, I had no doubt about the durability and understood why this was a top request for race spec Mud-bug rigs. 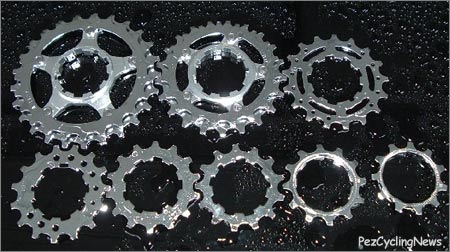 • IRD’s Elite cassettes are perfect replacements for both Shimano and Campy. 9 or 10 speed.

Don’t Be Scared
My concerns over being Petacchi’ed on the flats never came to fruition, there were some close calls but that was more me than the cranks. I already plan to use these for base and early season this year – the spinning will be good for me. The ability of the gear range in rolling terrain adds endurance with the close ratio and allows less fluctuation when riding HRM zones. I am not a physiology expert, but for me this set-up felt fairly aerobically efficient.

Why put in a six speed transmission in sports cars? So you can find a gear ratio closer to where the engine can supply the most power. That’s good when you’re the engine. Your shifters will need to stay fit as you will scroll more with this system due to the close ratios, less chain, and the precision machined components. The set-up is bomb proof and worry free to get you through frost heaves and that slushy grimy crap that is one part super glue down the path less traveled, so now there are no excuses to stay inside, and you might just find that taking the road less traveled is both fun – and good for you.

Note: A compact setup is not for everyone, as our ToolBox contributor Brian Walton from Cadence Cycles told us. Rider strength, riding style, terrain, and personal preferences all come into the mix, so like everything we recommend – you gotta think it through then make your own decision.

Tech Ed Note:
It’s safe to say that if you can be honest with yourself, can park your pride a bit and pay attention over a week or two of your normal rides, and you rarely find yourself spun-out in the 53×12, compacts might really expand your usable gears. What good are 10 speeds if you only ever use 7 of em? 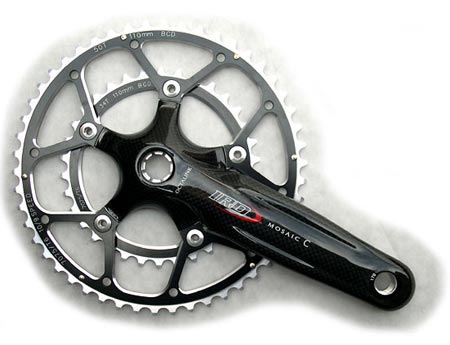 • The Full Monty – otherwise called the Mosaic C. And stay tuned for an all-aluminum version at a lower price point, and their own external-bearing bb called the “Wideload” coming soon.