If you are a small but growing company and want to play with the big boys you better come to play with a great performing, great looking product and it better be priced right. The latest test bike from Kuota stands tall and proud in the world of high end bicycles…
** Click the small pic for the BIG VIEW**

A few centuries ago, tired of being pushed around by the big guys, a man decided to unite a few tribes in order to dish out pain rather than take it. After getting together what became the Mongolian Army and running them around for a while, Ghengis Khan basically controlled the largest empire ever known to man (it stretched from east to west across Europe and Asia and into the Middle East and Africa). His Armies were constantly outnumbered, sometimes by tens of thousands (when they pummeled what became Russia, 20,000 Mongols put the smack-down on an Army of 80,000), yet Ghengis always seemed to have the edge. This edge was that he was the first commander to use great flexibility, super attention to detail and planning, and the sheer overwhelming advantage of the speed of a mounted attack (basically the first Cavalry).

If Ghengis rode a road bike rather than horse, it would have been the latest Test bike from Kuota.

One of the best parts of the job of doing tech reviews is seeing newer companies that lack some of the soft and comfortable (protect what we have) attitudes found at a few larger manufacturers. Some new folks also lack the major race exposure and brand-recognition enjoyed by well established names. So, if you are a small but growing company and want to play with the big boys, you better come to play with a great performing, great looking product and it better be priced right. The latest test bike from Kuota stands tall and proud in the world of high end cycles and has done exactly that.

An old saying goes that “Beauty is only skin deep”, so say hello to something that is all skin! 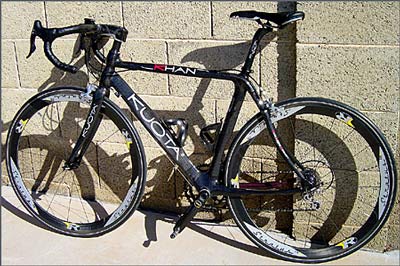 It is simply a marvel to the eye. The Khan is an unbelievably shapely Carbon Frame done so well that Kuota have no need for cheap cosmetics (cyclo-makeup). No paint, no [pathetic use of] tape over joints, no strategic placement of logos, nothing is shown but a beautiful carbon weave with either a shiny or matte clear coat. And the logo’s are plain to see, but still minimal in comparison to most. You know Kuota make a beautiful Carbon bike when you consider that the first naked thing I want to see in Sin City (Las Vegas’ home of the huge Interbike show) is the newest frame from Kuota, the Kredo!

There are a few frames like this from a few large companies, but to get this combination of naked detail and great design and aesthetics, you have to look at a special editions from Colnago or De Rosa or at the Look KG486, which means the price, weight or performance might not compare well to the khan. There are also bikes with nicely shaped tubing, but there are hidden internal metal sleeves in the joints, or the tubing is aluminum with Carbon inserts or simply a carbon skin. With the exception of the bottom bracket shell (and er yeah, the very end of the drop outs), the Khan is all Carbon, with no hidden suprizes.

Recently, Stephen Roche and a bunch of other well qualified folks did a high end bike test for the French Magazine “Le Cycle” that featured lots of big names and boiled down to three choices; the Khan, the Time Team replica VX and sweet looking Look KG486 (that I can’t wait to get my hands on…). You would also recognize the cream of the crop from other top brands that didn’t make the cut, and the test ran through a few issues before they got it down to the top three. The winner of Bike of the year for 2003 went to the Khan, and for all the same reasons I like this bike…

I don’t mean to get boring here, but I have to speak about the build quality. It is the logical result when the factory is an ISO 9002 approved facility. That means they have to live up to top flight standards not generally associated with the cycling industry. Adding another set of eyes and opinions and living up to a higher standard at Sintema is nothing but good from a consumers point of view… But enough of the babble about factories. On to the bike!

This frame has more curves than Pamela Anderson. Every section has been shaped pushed and tugged, not just for aesthetics but for performance. What results just also happens to look absolutely stunning.

Start at the start with a double barrel head tube that puffs out for rigidity (and looks cool doing it) as well as to add surface area for the top and down tube connection. 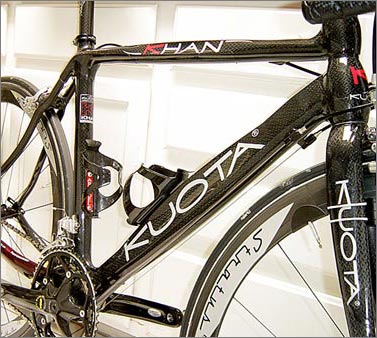 On to the Top tube… It houses the rear brake cable and is shaped for torsional stiffness and light weight. It also slopes, though less so than bikes like the Giant TCR.

The Down tube is massive, but tapers plenty and moves seamlessly into a very solid Bottom Bracket area. The Down Tube is all about stiffness on this bike, but is also supper nice shape.

The Seat Tube is large and stout. Starting at the sizable Bottom bracket area, it has a dent for the rear wheel to snuggle in to, but stays large all the way up (which is why you have a very large 30.1 seat post).

The stays (seat and chain) on this bike just have a lot going on. Big BB goes into the Chain stays. They are very different shapes and the Drive side is Kevelar wrapped for support, while the off side is shaped to stay stiff (and can use a little more meat with no chain rings to deal with). 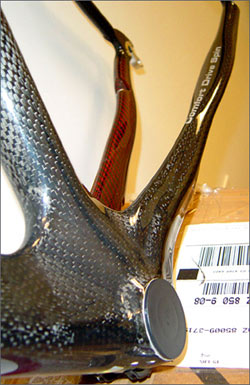 The seat stays have plenty of curves because, quite simply, the further that vibration travels and the more times it has to change direction, less you feel it in your butt. 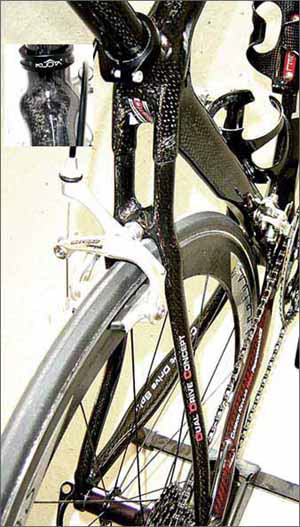 Something that is easy to miss is that the Seat stays don’t come together in a wishbone or “V” and tie directly into the seat tube. Instead they travel more along the sides of the seat tube and almost go around it. (you can see the bulge in the pics above). That means two things. First it is a little wider and a little more stable. Second and more important is that the vibration that does make it’s way up all the curves doesn’t get focused directly toward your butt via the seat tube, but rather skirts around it and goes to the top tube!

As stated above, all these tubes flow smoothly into each other despite doing different jobs well. The result is a gorgeous bike that performs extremely well. The oversized (but thinner) tubes do a great job of making this a stiff platform while keeping the weight very low (although not as low as their Kredo frame soon to be released!), and the shaping of the rear end makes it extremely comfortable.

This whole thing, complete bike with cages, pedals, computer etc (Items not weighed by lots of companies and other reviews) just barely hits the scales at 15 pounds (15.08). If I did so much as change the saddle to a standard flight-ti (not one of those stupid light weight things, but a standard Selle Italia Flight-ti) the bike would be in the 14’s. Change out the ridiculously nice Reynolds Carbon hoops for a super nice set of American Classics 420 clinchers and you have a bike that still pops in at the 15 plus range.

Handling was more stable that I thought it would be on a bike this light. The Fork is a real treat and did nothing but add to the overall performance effect. If this was a standard plane Jane 17.5 pound bike, the stiffness during acceleration in the bottom bracket would be good. Given its 15pound pedigree, it is extremely good in the acceleration and stiffness mark. When you consider that even though it is very stiff it might surprise you to know that it also rides so smooth that I actually stopped on my first ride to see if I had enough air in my back tire (only to find it pumped to a solid 170 psi)! The combination of comfort and performance is exceptional, tack on a retail price that is several hundred less than other top of the line bikes that give you some but not all of the Khan’s qualities and you have a real reason to look at one. And once you look at one, it gets better…

The technology coming through cycling today is great! There are other great bikes out there to be had. Stunning performers like the new Colnago C-50, sweet metal combinations like the Pinarello Dogma and new De Rosa Merak, The bikes get lighter, the ride gets better and the list goes on. But companies like Sintema and Kuota are really putting pressure on the big names. We as consumers are no longer forced to sit by while big companies make small meaningless changes (the new bikes above are pretty big changes that rock by the way) to high dollar product lines or release limited edition bikes that nobody can afford (and when was the last time a few stickers or special paint made a difference anyway?). Guys like Kuota, Argon 18 and others are forcing substantial change now and doing it at great prices. Weather you buy one or not, as a consumer you should be happy that companies like Kuota are really pushing the big guns!

Fare warning to cycling’s Grand Empires… There is a new Khan coming for you, and he ain’t taking prisoners!

Note that you can get one of these at the same place you could find the Viking bars we reviewed. Check out LaBicicletta.com and ask for Henry (tell him PezCycling News sent you). AND NOTE THAT KUOTA ARE LOOKING FOR RETAILERS IN THE USA!!! Call Patrice at [email protected] and at 514-219-2890 for more information and to set up a meeting at Interbike! Kuota’s web address is www.kuota.it

Thanks go to the wonder boys at Reynolds for letting me hang the incredible new Stratus UL wheels on this bike. Also to Vlad at Tufo (tires), because when you are riding something this sexy it’s always good to have the protection of great rubbers. The Campy stuff is what it is, 10 speeds of slick carbon love (and they’re adding more carbon for 2004). Speedplay for the pedals (zero plus zero equals low weight and pure float!). And the ever buttloving Selle Italia Prolink Trans AM.