“Look” what I found (er uh Stole..)
Pez gets a shot at the LOOK KG381. It’s always nice when a shop owner with good taste happens to ride the same frame size as you. In this case Ken Thayer of Phoenix’s Bike Den let me sneak in and grab his well stocked KG381 for a week. It wasn’t too bad… 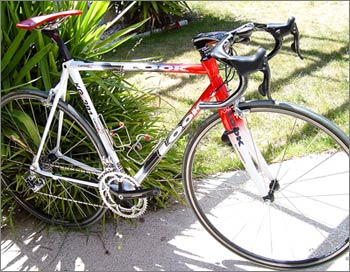 Right off the bat you notice that the kit on the LOOK is a chunk nicer than run of the mill. Cinelli Ram bar and stem combo and Checkpoint computer mount with a nice wireless dashboard were sweet to look at and not too bad on the comfort side. For me the bars could be a little less flat and wide at the top, and I would have opted for bar tape in the drops and just past the hoods, especially as it heats up here in AZ (already hitting over 100 degrees). 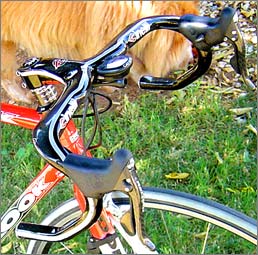 The seat pin from Look was a welcome addition, as it’s pretty easily adjusted, and any time you have a post with a curve / setback in Carbon, it tends to soak up more road bump than a straight post where the saddle clamps directly in line with the post. Loads of setback also make this a nice post. I can’t comment on the durability of this set up, but it was light and comfortable (and Look stuff is typically made well). I would have chosen at least the SLR gel top Trans Am saddle though, as I am not sold on anyone’s super light weight saddle for the long haul. I think that’s the one area that people are silly to place a weight priority over durability and comfort (not that it was uncomfortable), and wish every manufacturer on the planet were not featuring saddles that sacrifice a lot just to make their total bike weight seem lighter. 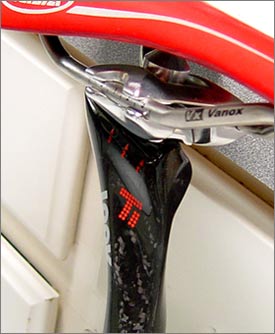 The Record group is what it is… good stuff fron the first guys on the block to go 10 speed (Dura Ace should be fun to play with though given the changes they have made in the areas of compfort and ease of function). The Carbon cranks are a bonus, although at 800 bucks a pop, I was pissing myself every time anything got close to them… And I added Speedplay Zero pedals to do the ride. I also swapped the wheels from the Campy Neutrons (nice wheels) in the picture, to the American Classics 420’s, so that I could better judge the bike flex and acceleration with familiar wheels. 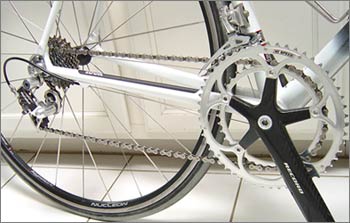 The frame itself is just plain neat looking. The top tube is more shaped than the pictures show, as is the down tube. It’s virtually all High Modulus Carbon on this frame, and LOOK took the opportunity to do what Carbon lets you do, in that Fiber orientation and shape can all be manipulated to perform in different ways (for comfort or firmness). The tube set is mated to an alloy lug set called SLT. I have no idea what SLT stands for, but maybe in French it means big and functional (or superlight?). I like the way they look on a frame, choosing to do the job rather than trying to hide from you. 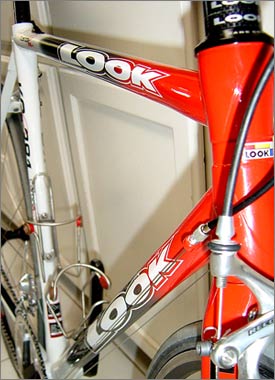 The rear end is also in carbon with the set binder area being metal. The interesting thing here is the slight and flat Seat stays. They are different than most folks, but it makes sense given that they need to be stiff side to side, but compliant up and down the length. 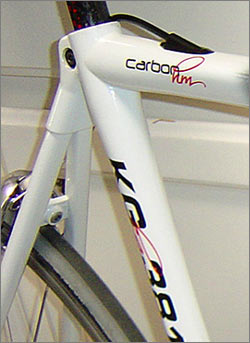 The Fork is an industry standard bearer HSC 4 Full carbon. I have personally rammed this fork into another rider, almost head on, going 25-28 mph and it didn’t blink (although the other rider wound up with a broke jaw etc… Sorry Dave!). It is light, stiff and simply does the job. 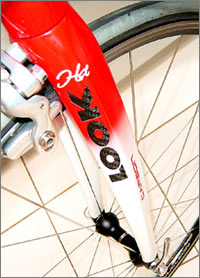 On the road this bike did pretty well. I was a little further forward and lower in the bars than I would have liked (part of the reason I like bar and stem combo’s that you can fine tune, rather than a system like the Ram, where your frame needs to basically be custom fit in order to have them be exactly what you need). This had nothing to do with the bike geometry though as it is pretty standard. But the slightly too stretched out reach put more weight to the front, but the bike handled well and the bar stem combo, along with the HSC 4 fork was actually pretty vibration friendly. Good marks to Look, as this would have been more of a problem on bikes lacking proper rake and fork stiffness at stability on the frame front end.

The best part of the ride is the comfort. I’m not sure whether they ran the fiber in a way that concentrated on comfort, but that’s what they got! This bike’s ride is on par with a few other high end Carbon frames costing a little more. The tradeoff was in Stiffness at the Bottom bracket, as the 381 does give a little under hard acceleration. The tube set is well done (and really looks great), but a little more beef in the BB section would have been better. But given that the Bottom bracket is a tough spot that even the venerable Colnago felt like addressing in its C-40 (making the HP), the 381 is in good company. And again, it’s under “hard” acceleration, meaning if you are not a guy trying to bake 1000 plus watts into a frame over several pedal strokes, you will appreciate the comfort more than noticing any power loss. And if the guys at Kelme, Credit Agricole and Healthnet can find a frame at LOOK that will suite their power needs, you probably can too… (Note that Look has a couple of frames in the KX Light and 486 that are also sweet to look at, with the 486 performing extremely well.)

All in all this was a good ride. It’s plush to sit on (even with the Saddle equivalent of a crystal g-string) and smooth in the corners. The Credit Agricole team finish is a head turner (helped no doubt by the top notch kit) on the test bike, and if you would rather, you can find it in a JAJA Special edition, a CSC (if there are any left) and a matt carbon / gloss black combo (which is jaw dropping good looking).

For more Info, hit the guys at VELTECSPORTS.COM. They can get you to the right folks to make the purchase. If you are in Arizona, Try Ken at the Bike Den (he’s there all day till I give him his rig back!). They are at 43rd ave. and Cactus in Phoenix (602)938-0989.