Like the smart bike builders they are, Fausto Pinarello and co. refined the designs of the now famous Prince and for 2009 have released the FP3 to appeal to that majority of cyclists who don’t buy $5000+ bikes, but still want the quality and heritage of a high end Euro road rig.

The FP3 was launched for 2009 as a more affordable version of their popular Prince carbon frameset – ridden by pro Tour team Caisse d’Epargne. It shares geometry with the Prince and Dogma, while frame materials and build kits differ. Most importantly, it’s a chance to get on a fully equipped Pinarello for under $4000. Prices vary according to build kit, but versions offered include Shimano DA7800/ Ultegra, Campy Centaur, and coming soon a Dura-Ace 7900 version.

Like most of the Treviso, Italy brand’s frames, the FP3 is traditional geometry – non-sloping top tubes, and slightly longer bikes than many of today’s popular compact designs. (The exceptions are a couple of the smallest sizes in the line up).

Click the Thumbnail at top for the BIG view. 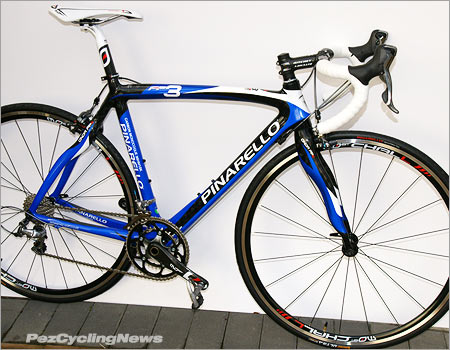 The front triangle is molded as a single piece of high modulous carbon, to which the chain- and seat-stays are joined. The tubes are big and beefy, giving the impression of a stiff ride, ready for all the leg churning, body-slamming action you can smack down. 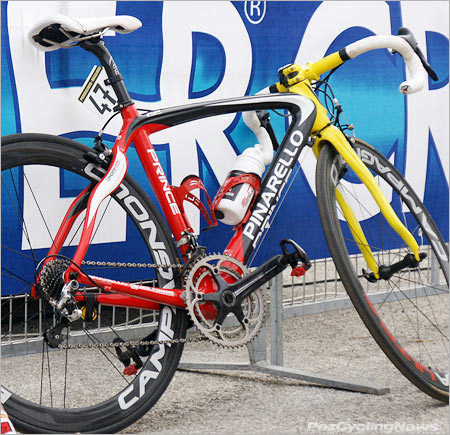 The FP3 shares geometry with the race proven Prince. 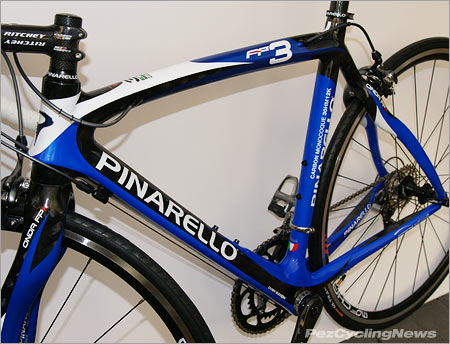 The Curved top tube ties together nicely with the forks and stays, and is designed to be smoother riding than a straight tube. 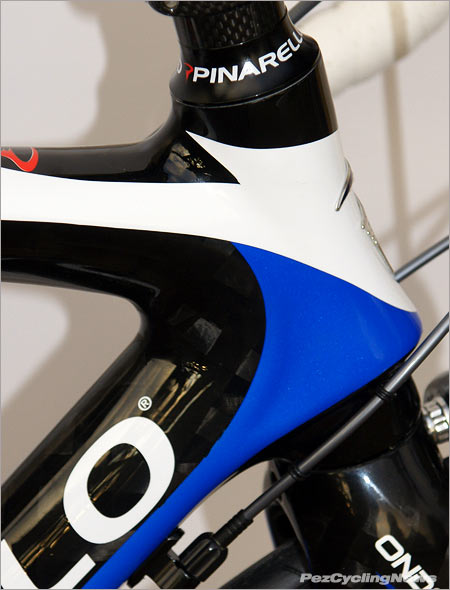 The FP3 joins a number of manufacturers with a 1-1/4 inch bearing at the headtube bottom (1-1/8 at the top), allowing a larger platform to anchor the forks and brace the front end where a lot of stress is taken. Pinarello’s US distributor Gita Bike reports the bell-shaped headtube does more than just look cool, adding both strength and smoothing the airflow at the front. 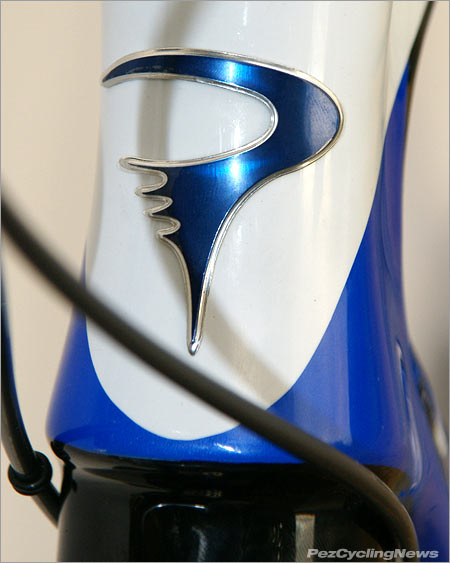 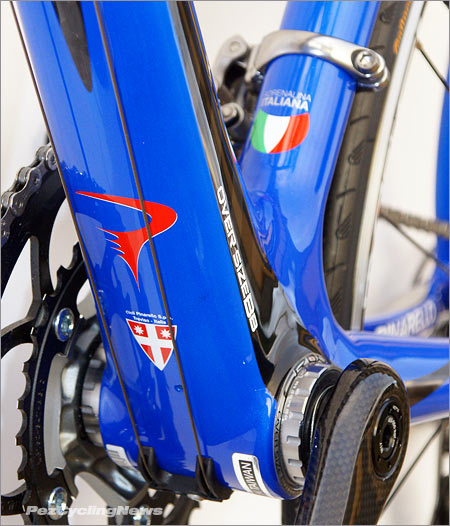 Like most performance tilted bikes these days, the whole bottom bracket unit is pretty beefy – the downtube is massive, and carries that girth along it’s full length, even flaring to almost full width of the bb shell at the bottom. Each tube on the bike is shaped with purpose in mind- to deliver power to the road while allowing enough comfort to make it rideable. The seat tube is the only round tube on the frame, and hosts a traditionally fitted seatpost. 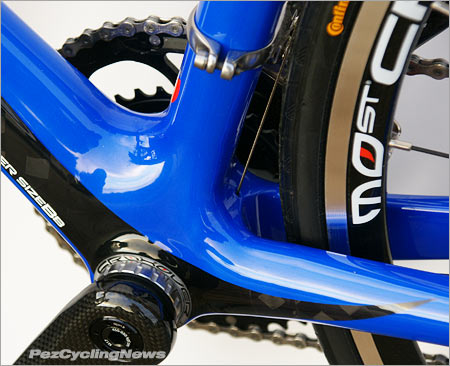 Attempting to counter all that vertical stiffness are the Onda designed forks and stays. The distinctive curves have become a signature of the Italian marque, and are intended to both add lateral stiffness (by flaring outward), and smooth out the ride. 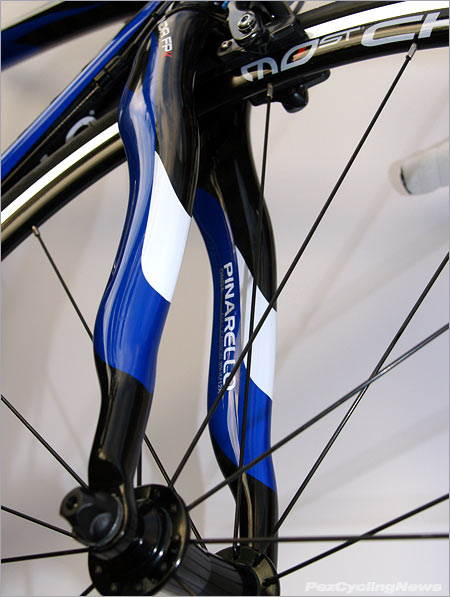 The FPK fork is new for this model, and looks anything but wimpy. It’s designed after the FPX fork but without the stiffness adding ridges.

In principal added curves should allow some buzz deflecting flex, they do add length (and volume) to the distance the buzz has to travel before it reaches the rider. The design principal is that the further it has to travel, the more it will dissipate.

How well they actually achieve this versus other shapes is impossible to say (at least until they send me an identical test bike built with straight forks and stays), and while the ride remains on the stiff side the aesthetic appeal is undeniable. 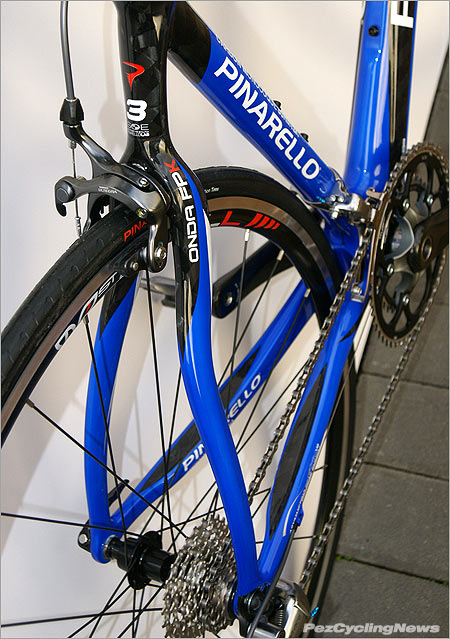 The rear stays show off the same sexy curves as the FPK fork, and the thick tubes are anything but wimpy – both in looks and performance. As the chainstays sweep toward the rear, they swell in the middle, adding more beef to the lateral stiffness.

There’s a story about the invention of compact gearing that dates back to 1981. It goes that Giovanni Battaglin had a special triple chainring crank fabricated by Pinarello so he could get away on the climbs. Apparently it worked as he won the race. 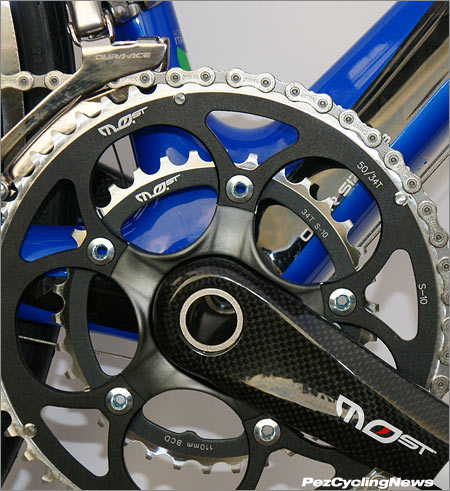 I first saw this a few years ago while flipping through a Pinarello catalogue post Interbike – all the bikes had been spec’d with compact cranks. This was a good couple years before I had converted myself, and was somewhat perplexed, but figured the Italians knew what they were doing. Since then I’ve written a lot of words on the virtues of running the 50/34 gearing, and have also never enjoyed my road riding more. Don’t be fooled, compact gearing is not for only cyclo-tourists and beginners – it really makes sense for a much larger percentage of riders than most non-compact users will admit. 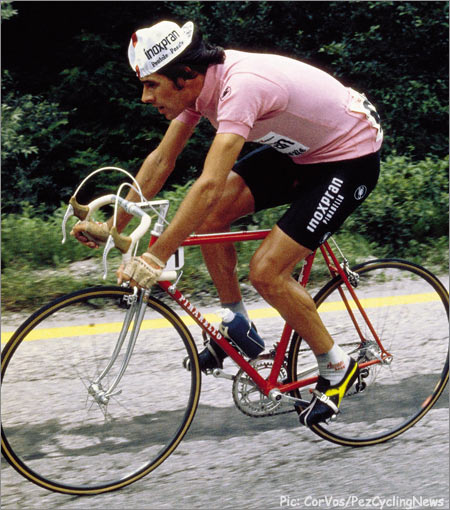 Giovanni Battaglin won the ’81 Giro on a Pinarello – and many say it was their hand-crafted triple which gave him an advantage in the mountains, and led the way to today’s spec of compact cranksets across the line up.

The benefits are many – closer ratios on the free wheel, shorter chain, tighter shifting, reduced weight, higher cadence options and their accompanying health benefits (your knees will thank you) and efficiency benefits (just ask a certain high cadence rider who won 7 Tours), the reality of a 50×11 gear being taller than a 53×12… If you’re not a Cat. 1or 2 racer, and you live anywhere there are hills, and you’re not riding compact gears yet, you gotta ask yourself how much time you spend in that big 53… I suspect about as much time as a 15 year old spends on homework… 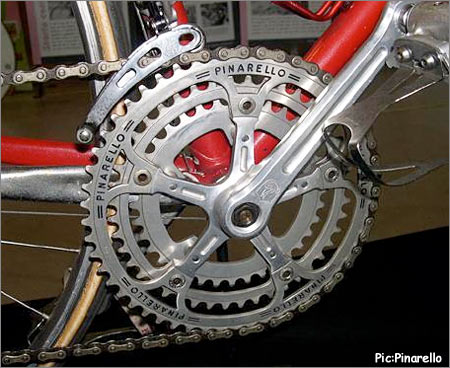 In this age when much of the 53T standard gearing is driven by manufacturers and shops, my hat goes off to Pinarello and their foresight, and their commitment to making the ride experience better before you even get on the bike. And given the a lot of intermediate nd even new riders wil be considering this bike, it makes even more sense on the FP3. For 2009 all FP3 models will come with Pinarello’s private label MOST compacts except the new DA7900, which will be a full Dura-Ace bike. 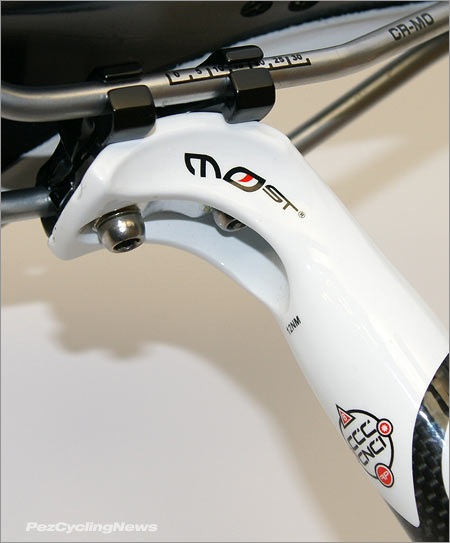 I last rode a Pinarello at the 2007 Giro, and am happy to report the seatpost on the FP3 has joined this century in terms of saddle adjustment. The old ‘contraption’ was also a two bolt adjuster, but for some reason the bolts were different sizes – one a 5 mm allen key, the other a 10mm hex nut… (I haven’t carried a 10mm spanner with me since my early days as an mtber circa 1984.) Needless to say adjustment on the road was royal pain, so the MOST seatpost here is a god send – sure it’s still got two bolts, but at least they’re both 5mm allen keys! Bravissimo! 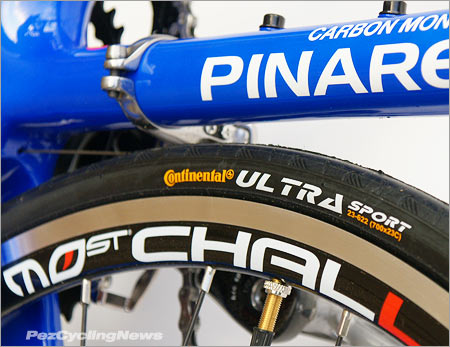 Tires, wheels, bar, stem, saddle and seatpost are all Pinarello’s own MOST brand (although I switched out bars and stem to adjust the fit). The components are functional and not unattractive (if you’re into loads of micro-branded decals). The FP3 comes with aluminum versions of each, and while each one does it’s job capably, they offer plenty of room for weight saving upgrades should you choose. 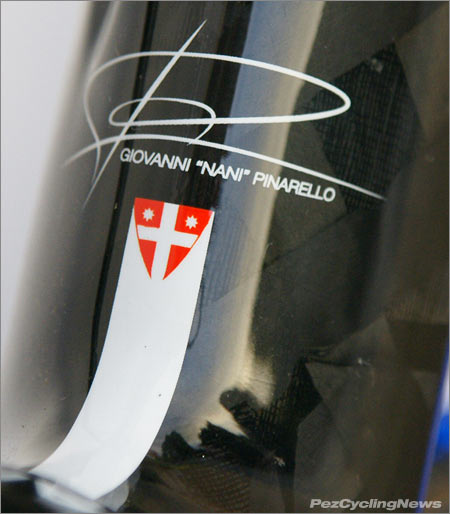 Overall the finish is top notch and the big 12k weave is actually pretty cool, the larger checks stand out as slightly different approach to showing off carbon, and fits well with the overall graphics package of the bike – which has a certain F1 appeal. 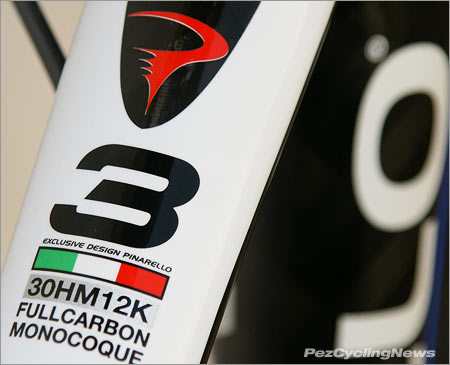 Ride it.
Geometry is pretty traditional Euro-stuff for this 54cm (top tube) frame – 72.5 head tube angle and 73.4 seat tube angle – a stable set up for all conditions – rolling, climbing, and descending. It’s a well-handling bike that doesn’t surprise, the ride is predictable and true, and it goes where I expect in a manner I expect.

I weighed my tester at 17 lbs, without pedals, not considered ‘light’ by today’s standards, but given that a reported 1100g grams of that is in the frame (Pinarello’s stat), there’s more evidence that a lighter bike is just a few component switches away. 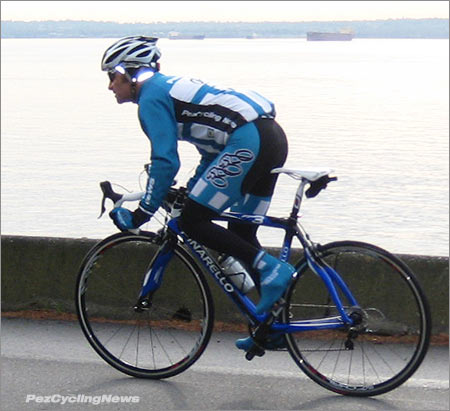 I found the ride to be on the stiff side- at least for my 140lbs. This is great for getting power to the ground, riding fast and tackling descents with confidence. The on test config of components – saddle, wheels, aluminum stem, bars, seatpost – made for a business like ride that may be too stiff for some riders, although heavier riders may have a different experience, and let’s not forget ride qualities can be tuned considerably with different components.

I would not call this a road smoothing, bump-soaking ride, but then based on the brand’s racing pedigree, I’m pretty sure it was never intended as such.

This bike is not a bike of performance extremes – not the nimblest climber, the fastest descender, smoothest rouleur, or quickest handler. It does dose out a solid measure of performance in each category, and all with one of the coolest names in road cycling painted on the top tube. 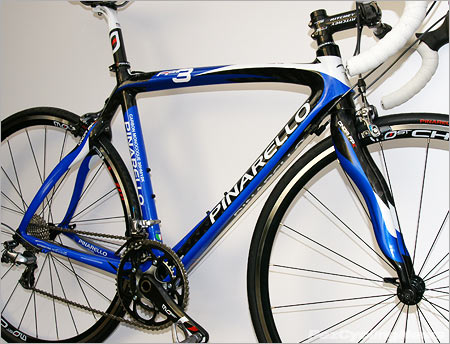 Get more info at Pinarello.com, and in the US at GitaBike.com.

Where to Get One: RACycles.com