One bike I saw more often on the roads at the Giro d’Italia was, surprisingly to me, the Scott CR1Pro. In a country as patriotic to their own brands as Italy, what are so many Italians doing riding a Swiss bike? I’ve been testing one since March, and here’s what I think… 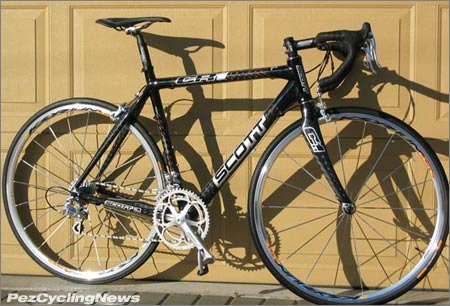 I’ve spent a reasonable amount of time traveling, working, and living in Italy, and one thing is clear to me – Italians are fiercely patriotic – to their own bike-builders, wines, fashions, cars… everything. So for a “foreign” brand to show up so often is real testament to the quality and value of this rig. Apparently national pride actually can take second place when a well-built, well-riding and well-priced bike is involved.

Scott is actually a Swiss company, and their head of engineering for bicycles is German. In other words, precision and performance are in their blood.

• Scott’s own design full carbon fork with 1-1/8” carbon steerer, and bonded aluminum dropouts. The fork has been designed to transfer braking loads into the headtube (instead of flexing itself), under braking load to maintain predictable handling. It’s also laterally stiffer, while slightly compliant frontwards – which helps absorb some road bumps.

This bike offers up a pretty complete mix of performance and value that should put it into any consideration set where budget caps you under $3000.

Although Scott bikes have been around for years, they were reintroduced to North America for 2004, and have been gaining ground ever since (and making enough of an impact that a certain “big” US brand-owner has reportedly been calling his dealers and threatening to pull his line unless the dealer drops Scott!) 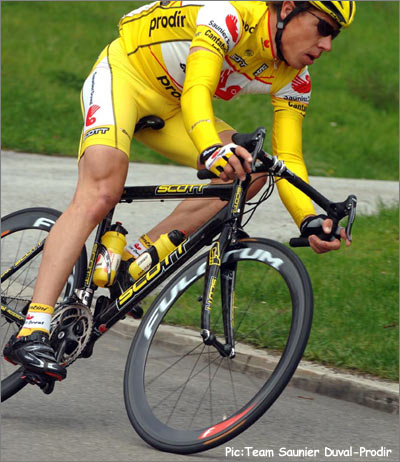 CR1Pro Versus CR1 Team
The CR1 Pro is the more affordable brother of Scott’s high-tech, lightweight race bike the CR1 Team edition (ridden by the Saunier Duval-Prodir team). We tested this bike last year and were duly impressed by the big value from its high level of spec (Dura-Ace), super light weight (under 15lbs.), combo of stable ride and responsive handling, and overall ride comfort. Priced around $5300, it’s at the low-end for bikes at its level.

The CR1 Pro takes the best qualities of the CR1 Team (weight, level of spec, and price), and offers them to the mid-range price market, here’s how…

• The front triangle is signature Scott: big tubes top, down, and seat. Maxxing out the diameter, making their own butted tubes, and precision mitering and bonding creates max stability at the joints.

• The lead and how to swing it: Looking under the bb reveals just how fat and curved the chainstays where torque from the rear wheel tries to twist the stays.

The Weight
The Scott USA website calls the full bike weight on the CR1 Pro at 16.94 pounds versus the 14.74 of the CR1 Pro Team Issue. On paper 2 pounds looks like a lot, and under a lot of ride conditions 2 pounds IS a lot – especially if you’re a light-weight like myself. But there are also benefits.

• The top of the Seat Stays is one beafy burger, baby. The girth again is designed to add rigidity while dissipating road vibrations past the seat tube to so you don’t feel ‘em as much.

The Frame
The CR1 Pro frame is the same design and build process of the CR1 Team, but actually weighs a whole 100 grams more! It’s still made with their own high modulus carbon fiber, built from tubes made in house to their own specs, but with a slightly different carbon blend that is less costly to produce and weighs the tiny bit more.

• The view from below the seat tube shows just how much material wraps around the seat tube, transferring road vibes past the seatpost and into the big frame tubes.

The Frame Difference
The guys at Scott are doing some leading edge stuff with the carbon frame-making process that will surely be copied by others. It’s how they make their frames so light, while retaining the ride characteristics they want.

Their proprietary method of joining the tubes at the joints is similar to what welding is to aluminum. First, they make their own tubes inhouse, which are butted, and then precision mitered for precise fits at each joint (much like aluminum or steel tubes) – making everything much stronger. Their carbon “welding” process then bonds all the tubes in an extremely strong joint – it eliminates the need to wrap the joints with layers of extra carbon and resin to make the joint stiff. The end result is they use less material to create a frame that is plenty stiff and strong, resulting in weight savings over traditionally made carbon frames.

• Get a load of that pipe – the massive downtube is almost as wide as the bottom bracket, and the chainstays connect with the bb at the widest possible placement – leaving little room for lateral flex of the bottom end.

• The dropouts are one piece, with non-replaceable derailleur hangars.

The gruppo on this bike is Campagnolo’s Centaur 10-speed gruppo. Set 3rd in the line behind Record and Chorus, it’s fully servicable and rebuildable, and spare parts are cross compatable with the two higher lines. It’s basically the same design as the higher priced versions, but without the ultra light carbon parts. It does what it’s supposed to: shifts gears and stops the bike when told to. I felt the shifting wasn’t quite as snappy as Record, but I never missed a gear and the enjoyment of my rides was never diminished.

The Mavic Kysirium Elite wheels performed well, as expected from the boys in France. If they seemed a bit heavy, they were also plenty strong for average weight guys in their 40’s. These are the wheels you can ride all-around, thrash ‘em, trash ‘em, put ‘em away wet – and they’ll be back for more tomorrow. Kinda nice for the ‘real rider’ budget, and for those with less time to clean and tune than when you were an unattached international Jacuzzi inspector (before you met your wife…).

• Steering is covered by Ritchey bars and stem, one the few manufacturers of a a “flat” flat bar with relatively shallow drops – great for guys with stubby wings and anyone who just isn’t getting paid enough to reach that far for the bars. They’re oversized at the center and plenty stiff.

Bars Stem Seatpost
Bars, stem, and seat post are Ritchey Pro, and should serve you well through many rides. My gripes on this bike were few, but one that stands out was the paint on the Ritchey bars and seatpost that could almost be rubbed off with a finger. The bars scratched on first adjustment, and the paint wore off the seatpost after five rides from rubbing thighs. Saving weight with less paint is one thing, but I’d still like my bike to look new for more than a few rides.

The RIDE
Two words for you – Stiff and smooth. It took me a while to wrap my head around these two seemingly opposed ride characteristics, but the ride opened my eyes.

As the pics above show, the bottom end of this bike is built for stability – fat tubes, full width junctions at the bb, head, and seattube all create a ride that is rock solid – without a hint of bb rotation (for me at least). This bike feels like every bit of your pedaling is making you go forward – which adds to the feeling of quick acceleration and smooth climbing. The front end is also stiff enough in that I noticed no detectable flex or give in any hand positions-whether pulling on the bars while climbing, and out-of saddle hammering. All of this was aided by a stiff set of wheels. That’s what stiff is.

The smoothness is what makes it comfy and rideable for hours at a time. Scott’s carbon lay-up design helps transfer bumps through the frame to places (other than the rider) they can be absorbed. The bike does seem to float over smaller bumps and does a great job of absorbing vibration. It also takes the edge off the bigger bumps.

The geometry is slightly steeper than standard, maybe 1- 1.5 degrees more “classic” bikes, which gives a nice stable platform I could ride for hours, while offering up more responsive steering. 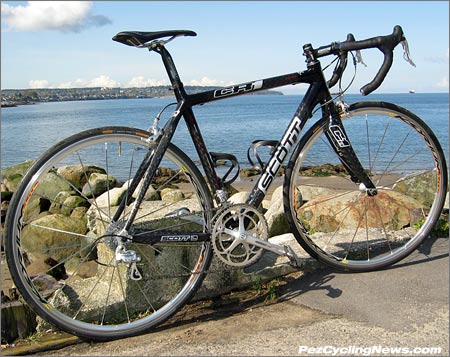 Summary
Anyone can remove material from a part to make it lighter, but there comes a point where structural integrity, strength, and fatigue life are affected. And most of us prefer a bike to last a few seasons, not break, and maintain its the ride characteristics through this time. So extra weight in the right places can be a good thing. The frame weight is as light as anything on the road (except maybe the CR1 Team issue), and has better stiffness than anything at this weight should. The components add a bit more to the overall weight, but at this price point, it’s tough to argue the trade-off.

You can buy one of these for around $3000 at your local dealer – which makes it a darn good value. The frame technology is leading edge, the components work like they should, and best of all – it performs as good as it looks and better than it costs.

It’s worth a look when you’re in the market.

See The Tour and Support the Davis Phinney Foundation