I rounded the bend at 300m to go to the mountain top finish at la Tenda – the end of the first hard day in the Alps at the 2005 Giro d’Italia. I rode alone inside the barriers, a good 90 minutes ahead of the race. With the finish line in my sights, a fan leaned out and snapped a pic, then the loudspeaker (just feet above my head) exploded to life as the announcer yelled “Attenzione Attenzione: Corso CHUISO! Corso CHIUSO!”

I knew I was busted – or about to be busted in a mere 200 meters. But what I didn’t know was that in a few minutes I’d be running the Zipp 303 Clinchers through one tough test of strength and durability. 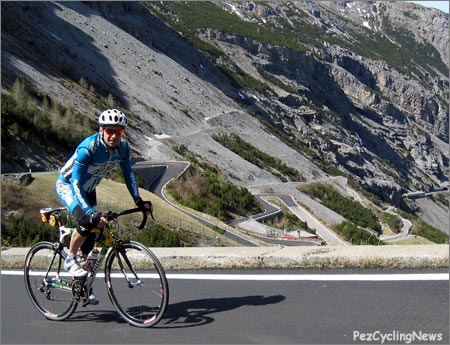 The day started out hot in Varazze on the Mediterranean coast, where this 194km stage 17 began. By the time I reached the top of the last climb, I’d been in the saddle for about 2.5 hours, scaled the 940m Colletto del Moro and it’s final 2km of 20% grades, then rolled the gradual 20km climb of the valley to Limone Piemonte before struggling up the final 14km’s 12 switchbacks to the top. 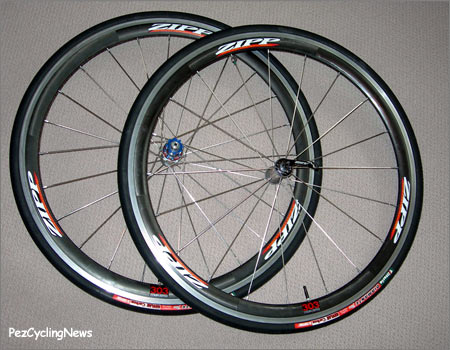 I’d hit a bad patch on the last slopes and was reduced to laying on the ground for a while – enjoying the clear blue Alpine skies. But duty and pride called me back to my feet, on I went to the last few – painfully slow – kms of the climb.

At 1100 meters to go I met the carabinieri guarding the closed-off final section. No problem – I whipped out my press creds and was by with a smile. I’d crossed over into the surreal – riding alone inside the barriers over the final meters of a grand tour stage is a strange and amazing feeling. I wondered if I should be there, but my creds said I could. 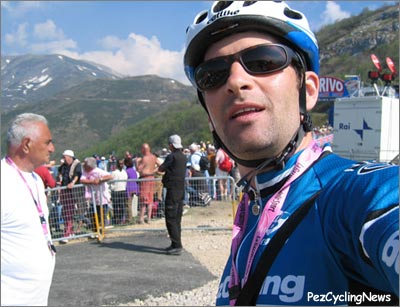 • That’s the summit finish of La Tenda in the background, and that guy on the left had the stink-eye on me – no way I was getting down the course.

I was sure however, that a cycling journo who was actually cycling was going to shock the Italians. “You NO Gonna Believe!” as Italian comedian Joe Avati would say…

I pedaled the last few hundred meters slow and easy, soaking up the curious – and envious – looks from the tifosi on the other side of the barriers, and living this moment of a lifetime for a long as I could. Would I actually make it across the line at a Grand Tour? 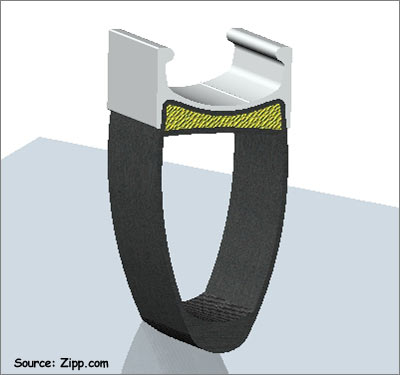 • The semi-aero shaped cross section. The curved sidewalls offer some vibration damping, and add to the aero-properties of the wheel. They’re more areo- than low profile wheels, but less so than full-on deep section rims.

Then just passed the 300m to go sign the blaring announcer foiled my plans – but this being Italy- I still had a good shot at talking my way past the cops waiting for me at the media vehicle turn out.

I pulled up and flashed ‘em my creds, but they’d have none of it – there was no way I was getting to the finish line – not even by foot! These guys were tough – my only option was to move off course where the other media vehicles were.

I was now on the wrong side if the barriers, standing in a meadow atop a barren mountain. Press access was limited, and there were some much better vantage points lower down the climb. 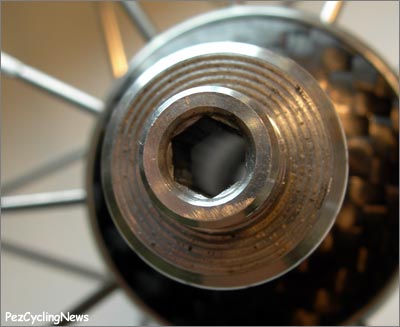 One Way Down
But I was outnumbered and there was no way they were letting me back onto the course to descend. I looked across the meadow, which sloped down with the corsa, and saw my only avenue for escape – and a bold test for the ZIPP’s.

X-country on the road bike – why not?

I clipped in and pushed off. The slope wasn’t so bad as long as I rode across the grade, picking my line carefully through the alpine flora. I thought of Lance in the ’03 Tour, I thought of my own mtb background, and I thought about the Zipps. 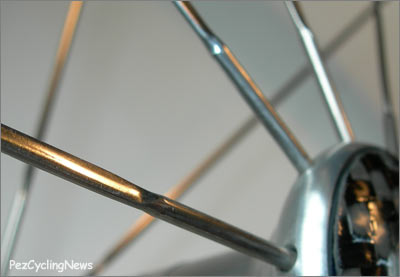 • The Sapim X-ray spokes are elliptical in shape, allowing them to better slice the wind while creating less disturbed wind in their wake. And as we all know, disturbed wind is best kept to a minimum when you’re looking to reduce drag and increase speed.

500 meters and 10 minutes later I was wheeling back onto the tarmac, and breathing a big sigh of relief – no flats, no dings, no dents. The Zipps held up no problem. Now, this type of riding on any road wheels is not recommended, but every once in a while we find ourselves in a spot the requires some daring-do.

But it was testament to their strength – at least under my 140lb weight. In fact, over the past 3 months that I’ve ridden these wheels, they held up just fine over the 8 km dirt road climb over the colle della Finestre, and over a 12km dirt packed section of ride in BC’s Okanagan – not to mention several hundred kms of regular road riding. 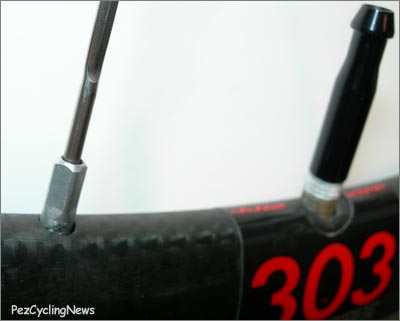 The 303’s are a semi-aero shaped all-rounder. Unlike some companies’ wheel sets that claim “semi aero” but provide squat aero, the 303’s have some impressive tunnel test results that give them more benetfit that a few of their competitors’ deep section wheels. (See more info on Zipp’s wind tunnel research here.) They work well rolling, sprinting, climbing and descending. The mid-profile 40mm deep rims react better to cross winds than full-on deep aero-rims.

We’ve reviewed a few Zipp wheels before, and have covered off the extensive amount of science they put into their designs – read about the Zipp 808 Technology here. Suffice to say you could accuse the guys at Zipp of actually trying to reinvent the… wheel. But they’re efforts are plain to see, and feel.

Ride Quality on the road is top notch. For lighter guys like me, I’ve found a lot of wheel sets are just too stiff – eliminating much of the damping to be enjoyed from carbon bike frames. Although Zipp tells me their ride quality is tuned for riders in the 175lb category, these for me, absorbed enough of the road chatter, while remaining plenty stiff.

I rode these on some very long – 20km+ climbs in Italy and while they don’t disappear under me like the same set of 303 tubulars might, these only lose out to light tubulars in climbing. They more than make up for it in clincher vs tubular practicality though. And as what goes up must… they are also a treat in
conditions requiring heavier braking. They are also plenty stiff laterally and in sprinting conditions as well as high speed cornering, they remain very stable.

Descending they’ve been stiff and true – I haven’t noticed any unwanted flex when jamming through corners at any speed. They keep the bike on line and going where I point it. 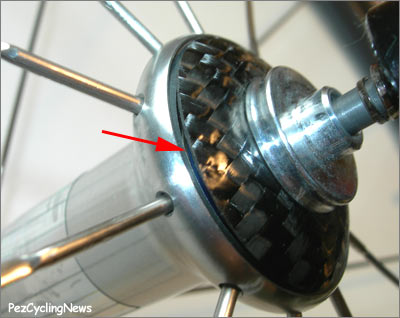 • The good news is the hub caps no longer rattle. The bad news is they don’t seal much out. The good news is the bearings are so well sealed already, Zipp assures me you don’t really need the caps to protect ‘em, and I’ve had no trouble – even after 2 hours riding in a dirty downpour near lake Como at the Giro.

Zipp claims the weight at 1543 grams for set – (3.4 lbs) which in the world of wheels is not the lightest, but not the heaviest either. Like the other characteristics of the wheel set – they’re not extreme in any one area, but pull together a complete all-round package. 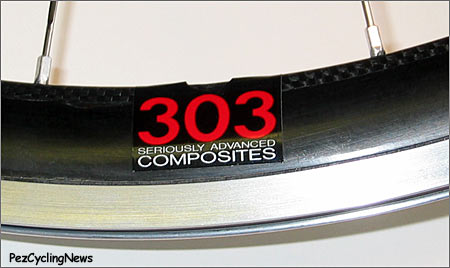 Wheels – What Are They Good For?
Absolutely everything – say it again! Pop lyrics aside, I like these wheels as an everyday, all conditions set that you don’t need to worry about. They’re tough – and they’ve held up fine under a complete variety of spring and summer conditions and continue to be the most comfortable wheel set I’ve ridden. I’ve even had a few stones ‘ping’ off the spokes – you know the kind that sound like a bullet ricochet? – and no probs at all. 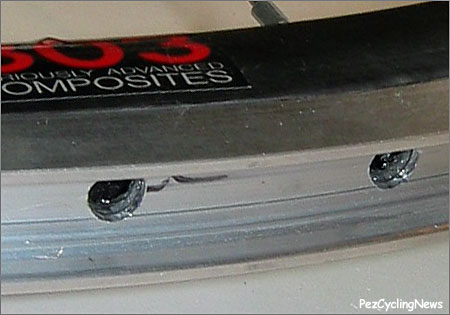 Priced at $1650 msrp, they’re not the least expensive set of wheels around. But then part of that cost includes a more than respectable amount of r&d that the Zipp guys do themselves. They’re made in America – with just Sapim CX-Ray spokes from Belgium (the most expensive spoke in the world!) and the bearings from Switzerland coming from outside the country.

For all-round clinchers – these offer a lot of value in terms of r&d, manufacturing to very tight tolerances, durability, and ride quality – certainly enough to check ‘em out for yourself. 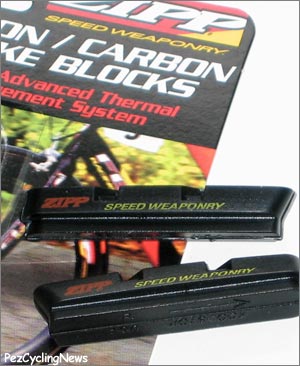 Zipp recommends their own brake blocks for the best
stopping and wear combos with Zipp rims. Mine held up
nicely over several hundred kms of riding – they’ve still
got lots of life left.

Get more info at www.ZIPP.com