Training and racing with power has taken over the upper echelons of the cycling world. Until recently though, cycling power meters simply cost more than most of us want to spend. That’s changing for the better, and the POLAR CS600 with the new Power Output Sensor WIND is a perfect example of how training with power is now more accessible than ever.

Polar, famous for their heart rate monitors, recently launched the CS600, a new computer that incorporates a novel method of measuring power, along with key heart rate, cadence, speed and altitude data, to allow a rider to analyze a workout in great detail. Even better, the Polar CS600 does not require replacing any components on the bike, so you can use any wheels or cranks you wish. And at a suggested retail of US$709.95, the Polar unit is one of the least expensive power training options available. Let’s have a look. 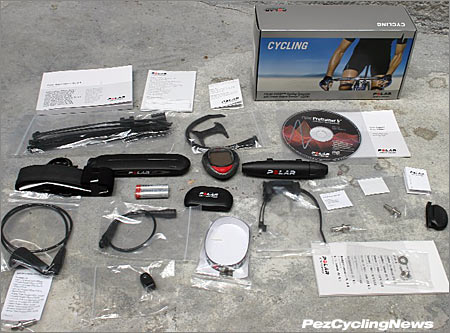 The CS600 w/Power comes with everything you see here – including batteries!

Opening The Box: Smaller = Bigger
The box of the CS600 w/Power is small, but inside is a lot – in fact there are 19 separate bags and pieces, plus 5 manuals or information sheets, and one CD. Whew – . One thing that we noticed right away is that the computer head is much smaller than any of the other powermeters out there. In fact it’s just a bit larger than the size of a regular bike computer, which is great for time trial & triathlon bikes, where the larger heads of some powermeters don’t work well with aerobars. 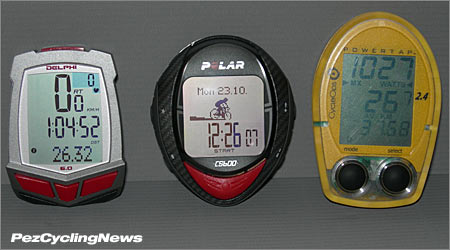 The Polar’s head size sits nicely in between highend cyclocomputers like the Delphi 5.0 and powermeters like the PowerTap.

After unpacking it all, it is definitely time to start reading. Basically, each separate component (power, speed, and cadence) has its own little manual (in 7 languages), hence the bulk of the paperwork. The CS600 is also available without the power option (priced at US$419.95), which can be added at a later date for $359.95. 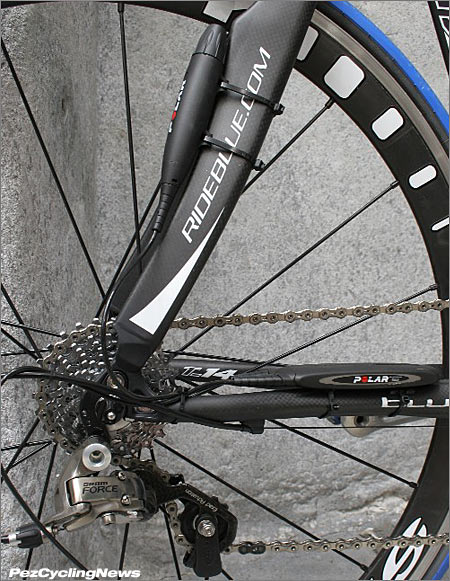 The entire measuring system fits snugly onto the rear stays.

Installation, Set up, and Initial Impressions
All powermeters require some care and precision for installation. Definitely not a “toss it on and head for the mountains” type of device, the Polar CS600 takes some effort to get mounted properly.

The new Polar Power Output Sensor WIND works in a completely different way than the traditional power measuring devices. Rather than measuring deflection in a metal component like SRM, Ergomo, and PowerTap, the Polar does some complex math to measure the vibration and speed of the chain speed past the chainstay mounted sensor. In theory, this process is identical to the pickup of vibration by an electric guitar. In Polar’s case, this allows a power measuring system that adds no friction to the system. 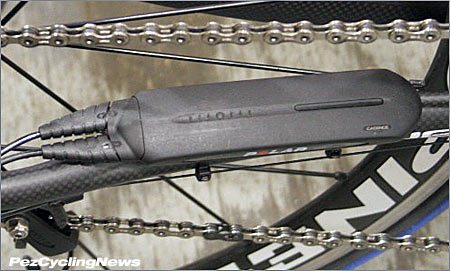 Setup of the chainstay sensor is critical, and requires careful measuring of the chainstay length, finding the center point, and placing the sensor in a very specific alignment relative to the chain. Three sets of shims are included to get the sensor as close to the chain as possible (ideally 2mm in the small/small combination). The sensor has a powerful magnet inside, so when you are in the small ring and coasting, often times the chain will ‘stick’ to the sensor. This isn’t a problem, as it pops off as soon as you start pedaling, but is a little unexpected the first time it happens. 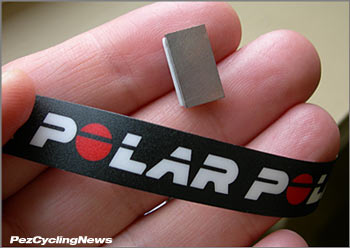 The cadence magnet is tiny, and straps onto the driveside crankarm.

You’ll need to remove the chain and weigh it, as well as count the links and figure up the length. Why? The math calculations done by the Polar need the density (weight divided by length) of the chain. There is a chart of ‘typical’ values included in the manual, but our measurements varied by over 10%, which would mean that our power measurements would also be off by 10%. So take the time to do it right, and your data will love you for it. 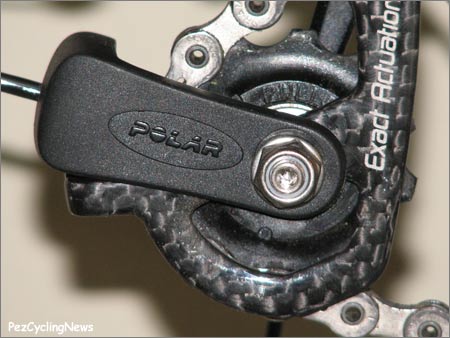 The chain speed sensor bolts into the bottom of your rear derailleur, and works with SRAM, Campy, and Shimano.

The rear derailleur needs to be fitted with a chain speed sensor as well. Included in the package are 3 bolts to replace the lower derailleur pulley bolt, depending on whether you have a Campy or Shimano rear derailleur. We installed ours on the SRAM Force derailleur, and found that the Shimano Dura Ace bolt works fine on Force and Rival as well. Replacing the pulley bolt is simple.

Once the chainstay sensor and the pulley bolt are installed, the rest of the system is fairly typical for bike computers. There is a largish battery pack/transmitter that sits on the seat stay (using 2 AAA batteries for power). We did have to very firmly press the battery pack into the holder to get everything to light up. Don’t be afraid to give it a good shove in there. Setting up the speed sensor and the computer head are no problem.

There are a number of steps to setting up the computer head, with wheel size, units, power, etc, but none of it is really more than reading the manual and following the steps. The CD includes a separate manual for use of the CS600 computer head, rather than setup, as well as the Polar ProTrainer 5 software for analyzing data. 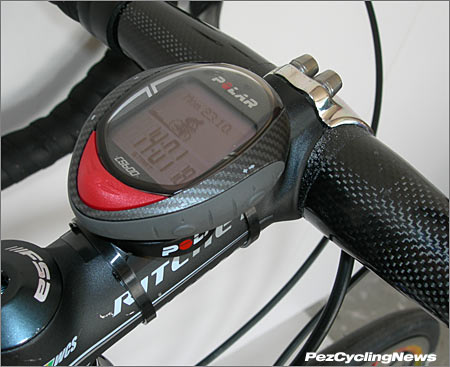 Mounting for the head works on both bars and stems, but the width of the mounting base may not be suitable for some variable diameter bars.

Using the Polar CS600 w/ Power
As you may have guessed, the setup of the Polar takes some time and effort, but once it’s done, it’s solid and reliable. Polar introduced a power output sensor a few years ago, but there are many new features on the CS600 compared to the older Polar power unit.

One major improvement is you can now record data in 1 second intervals. This is critical for analyzing spikes in power from sprints or attacks. The Polar gives you the option of 5, 15, and 60 second intervals as well. One drawback is that at 1 second intervals, there is only 2 hours 50 min of memory available, which is a bit of a pinch for a long race or ride.

With loads of data being recorded, there is only so much that can fit on the screen of the head. Polar thoughtfully allows the user to customize the functions that are displayed at one time, so you can get whatever data you want, when you want it. 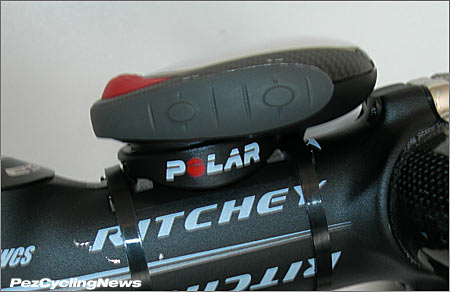 One other excellent upgrade is that the CS600 uses 2.4ghz transmission for both the power measuring unit and the heart rate chest strap. This frequency is far less susceptible to interference than the older units, and so random spikes or dropouts in heart rate and power data are far fewer.

Data from the CS600 is downloaded to the computer via an infrared beam in the computer head. If you computer doesn’t have a built in IR port, you can pick up a usb IR interface that supports the 2.1 IRDA standard for about 20 bucks like we did. We hope it’ll soon be included. 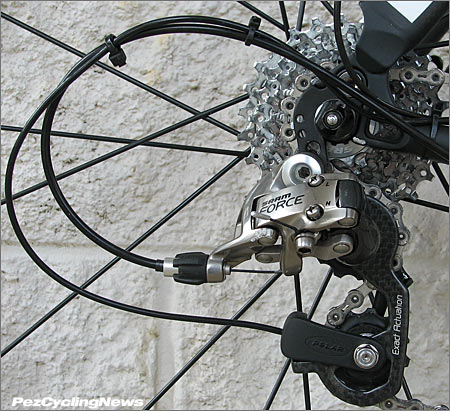 The rear pulley sensor cable needs a bit of slack to account for some movement.

Durability
By design, the Polar Power measurement device is external on the bike, as no components are replaced. Placing the wiring carefully is important, so make sure that everything is routed correctly and zip-tied. Another critical setup issue is leaving slack in the wires, especially with rear derailleur unit. With the motion of the derailleur, the wires need to be able to move quite a bit. Wires without enough slack eventually got pulled out. With the older Polar system, a snagged wire disabled the whole unit. The CS 600 has plug in components, so a damaged wire can inexpensively be replaced. The chain sensor unit is a super tough plastic that is designed to be slapped by the chain without concern. Gunk on the chain and derailleur pulleys had no effect on the power measurement – the Polar CS600 is made for real world conditions.

A Whole Lotta Data
The data analysis with the ProTrainer 5 software allows the rider to track rides with reams of data about power, heart rate, speed, altitude, distance and cadence. Your training diary is a calendar, where you can drill down into the data in a myriad of ways to see your progress. One very helpful feature is that altitude is shown as a graph under your power and other data, so that you can easily see your power output on climbs. Everything can be saved in a variety of formats, and can be emailed to a coach.

The allows easy access to all the data, but no Mac version yet. The red line above is Altitude, the green line is Power, and the blue line is Speed.

Another very cool feature unique to the Polar CS600 is that it shows your proportion of power of your left leg vs the right leg. I had a knee injury early in my cycling career and always wondered if I ‘learned’ to favor one leg. Well, this is how you can find out. It also shows the percentage of input on each pedal stroke, i.e. are you pedaling in circles or stomping? Both bits of information are shocking, to say the least.

Further, Polar data can be imported into CyclingPeaks software, which is the gold standard of coaching software – some more forward thinking from Polar.

Base Line
I loved the ability to use any wheels and cranks with the Polar CS 600. Most racers have a set of training and racing wheels at the minimum – so switching here is no problem. For time trials, there aren’t any powermeters built into a disk wheel. Power in a time trial is an excellent pacing tool, so that is a natural match for this powermeter.

I want power data for both training (to get better) and racing (to find my ‘breaking point’- ugh). The Polar unit does a great job collecting and downloading data that can be analyzed and tracked in great detail.

And at $709.95, it is a very affordable, accurate powermeter. It took some intestinal fortitude to get the installation done, but that’s more an issue of a lot of steps rather than hard to figure out. I also would like to see more memory to store longer rides with full data at 1 second, or perhaps offer a 2 or 3 second option.

Thanks to Jim Riosa of the Charlottesville Tri Club for supplying the test bike.