Pirelli PZero Velo Tires Are Back

By Charles Manantan On Jun 27, 2017
Share
Like PEZ? Why not subscribe to our weekly newsletter to receive updates and reminders on what's cool in road cycling?

Going back to their roots as performance cycling tire makers, Pirelli Tires introduces the Pirelli PZero Velo, PZero Velo 4s and PZero Velo TT clincher series tires. Current sole suppliers for Formula One (Auto) and World Superbike (Motorcycle), Pirelli have returned to cycling as they see the bicycle as the future for racing, transport and the environment. 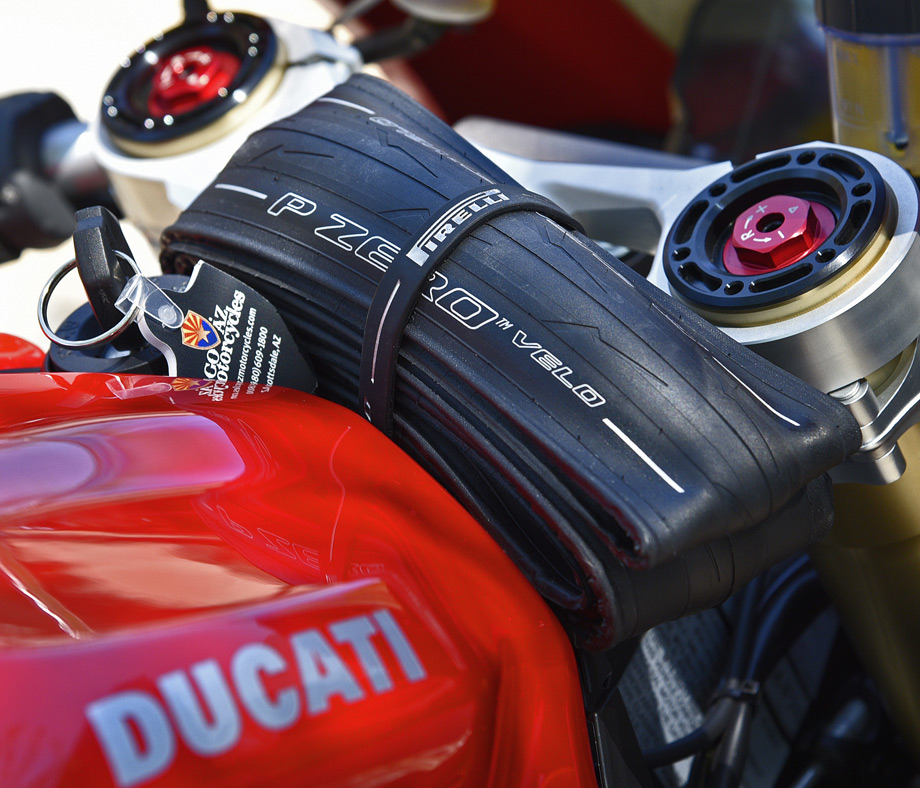 You already know who Pirelli are… Chances are that you’re either using or have used their product on your own motor vehicle as they’re one of the largest producers in the world.

The company began in Milan Italy in 1872 under the rubber expertise of Giovanni Pirelli who understood the material well enough that the company worked in multiple categories including Telecom, Scuba rebreathers and, of course tires… 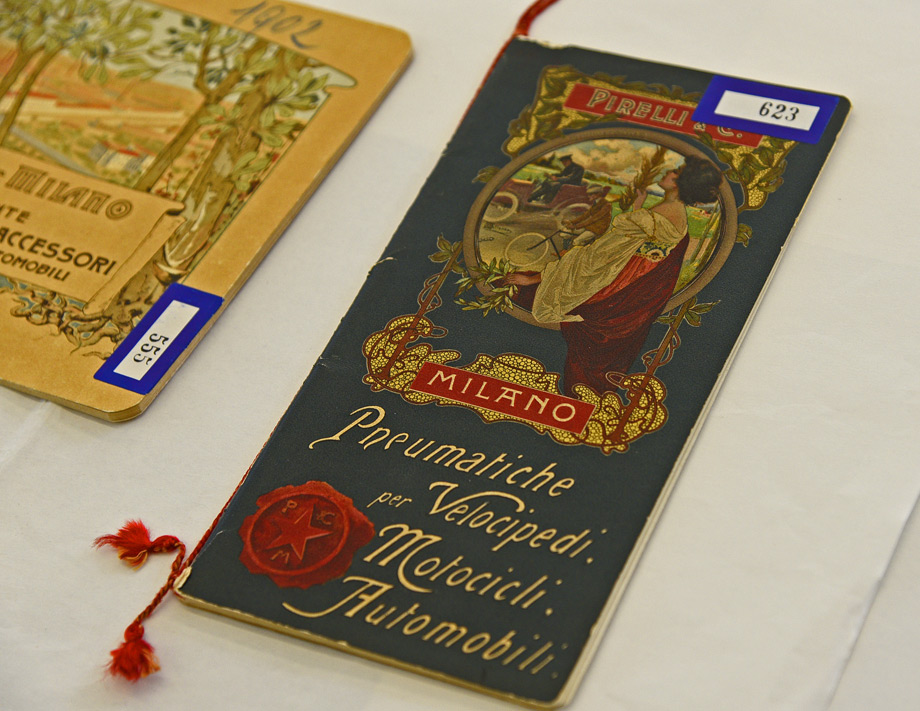 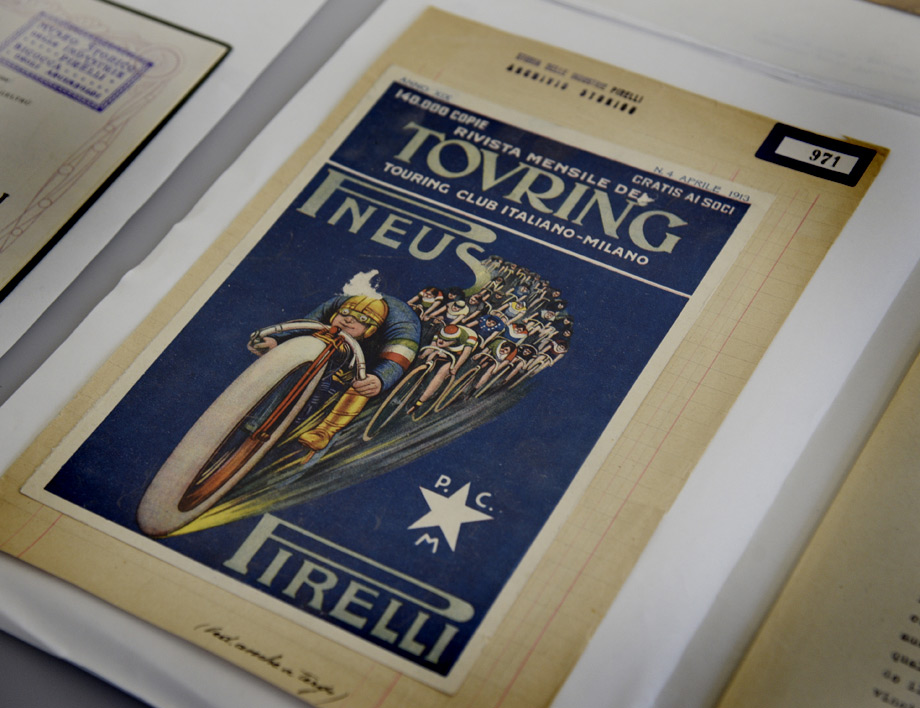 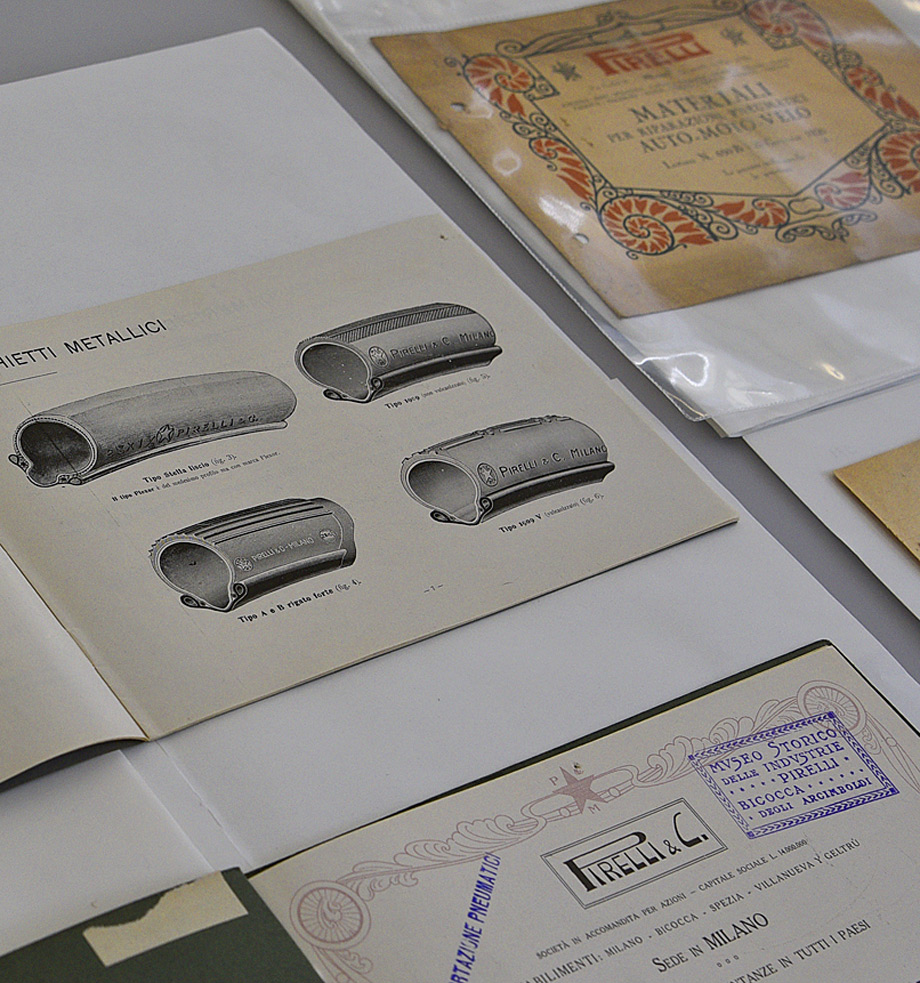 Early Giro d’Italia riders were mainly on Pirelli rubber and the company has never lost the passion for cycling. In 1909, Pirelli tires were on 30 of the 49 finishing rider’s bikes. 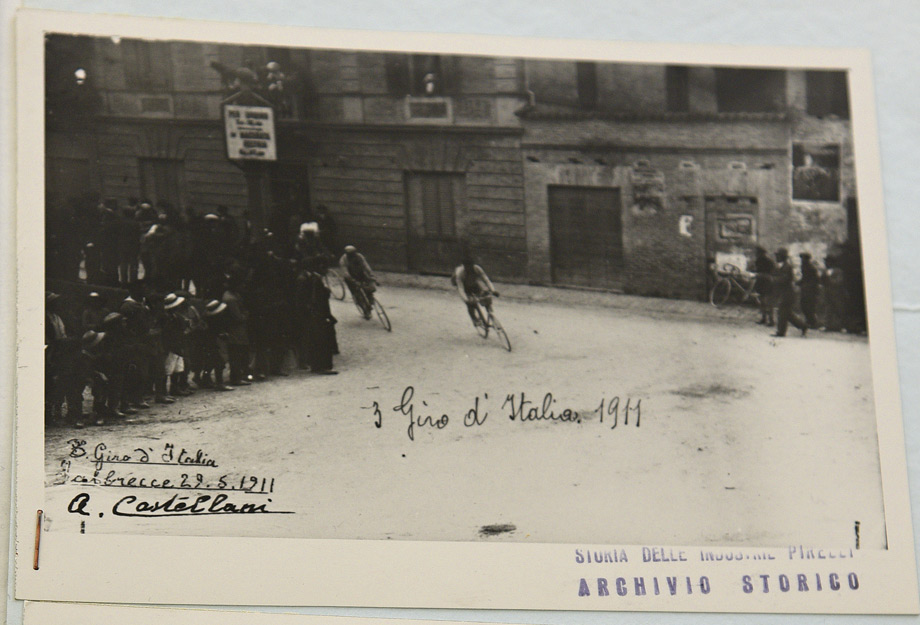 That history continued through the era of Fausto Coppi…

Fast-forward today, Pirelli have revenues of €6+ billion from operations in 160 countries. More importantly for their reentry into cycling, they invest more than 6% of revenues through a staff of 1400 people in R&D. 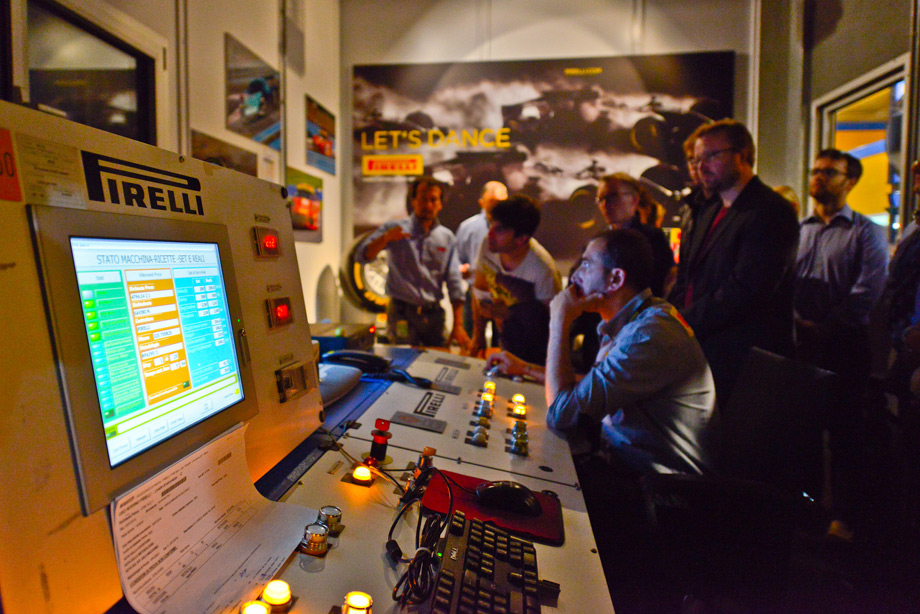 And Pirelli have been racing for 110 years… 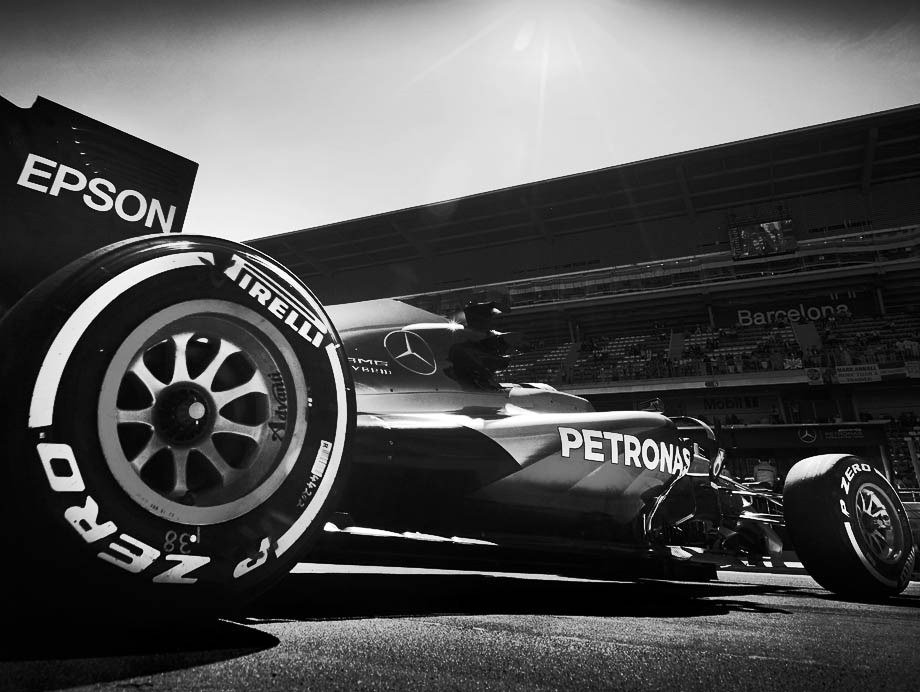 Beyond Formula 1 and World Superbike, Pirelli have also been creating tires for the fastest road-going vehicles on the planet, working directly with the world’s leading auto and moto manufacturers to build tires designed specifically for the latest road legal hyper-cars. The latest from Ferrari, McLaren, and Lamborghini are standing on P Zero.

The first P Zero was created for the San Remo Rally to meet the high performance needs of Ferrari’s monster F40. Today’s most recent P Zero is designed for high performance cycling in 3 tread profiles and a couple of different reinforced casings and an all new SmartNET Silica compound to create the PZero Velo range.

The initial Pirelli PZero Velo range includes TT, RR and 4S, with the RR as the version built to handle variable conditions but with a high focus on performance. 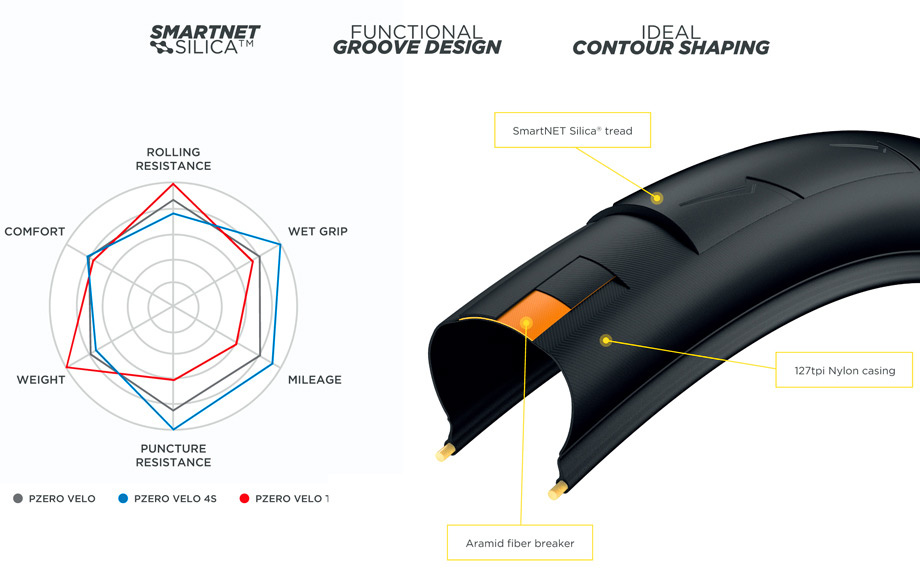 This is an aramid fiber reinforced 127 TPI casing with Pirelli’s SmartNET Silica compound in a single “flash” pattern.

The “Flash” grove tread pattern for the RR tire is derived from Pirelli’s Diablo Supercorsa moto tire and it’s designed specifically to allow a full slick contact patch at the “Central” section. This is to have the lowest rolling resistance and also the maximum tread stability for braking. 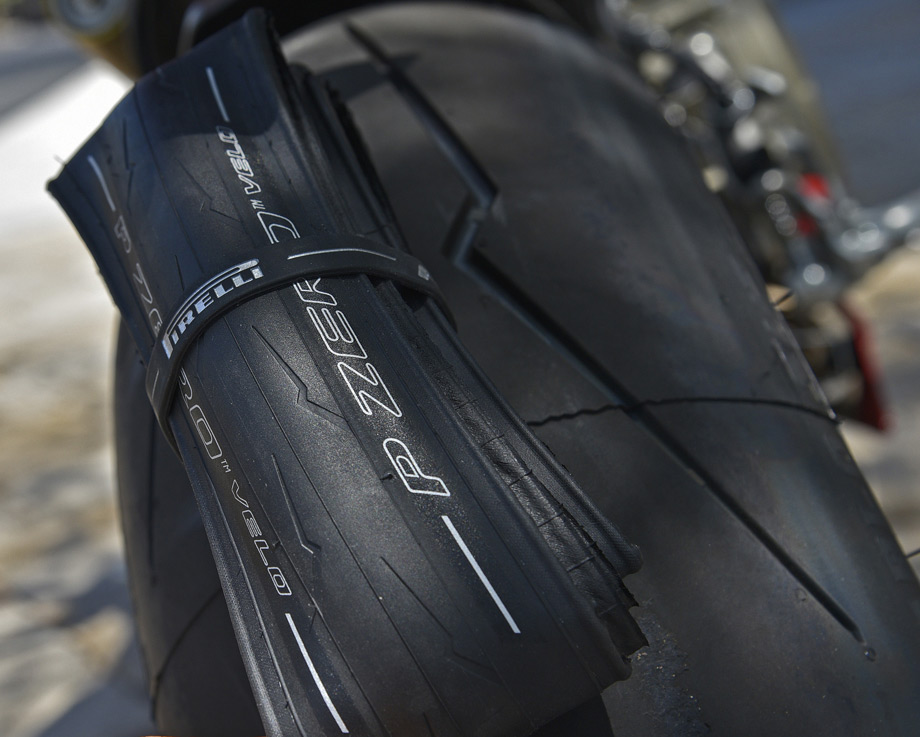 The “Middle” section of the tread is the section of the tire that is the critical transitional portion that a rider will be on in higher speed, more upright corners and as they’re potentially still braking but initiating more lean in to tighter turns. This part of the “flash” grove is thin and in-line with the direction of rotation to allow the water to eject in a similar direction or travel. This section of the grove is also a deeper portion of the tread, but it’s a thin grove so that stability of the rubber is maintained (to help eliminate tread squirm and movement). 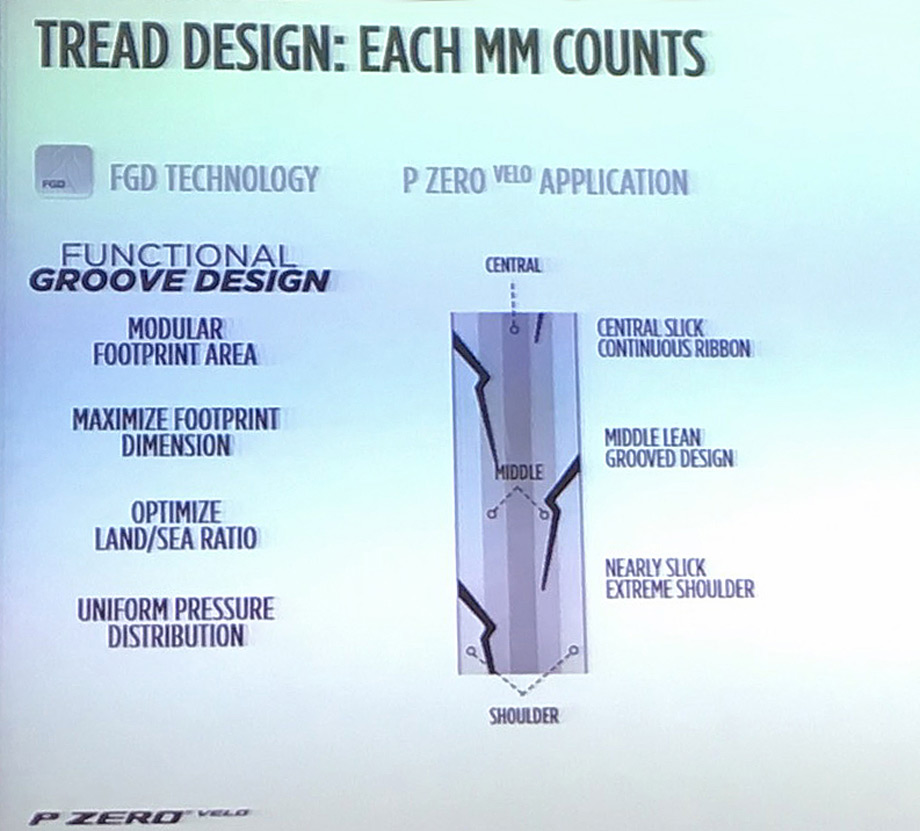 Moving on to the shoulder of the tire, the flash section is wider but also a shallower grove that is nearly slick but with enough depth change to allow the water to travel and eject more in line with the side loaded forces that occur when leaning over further. 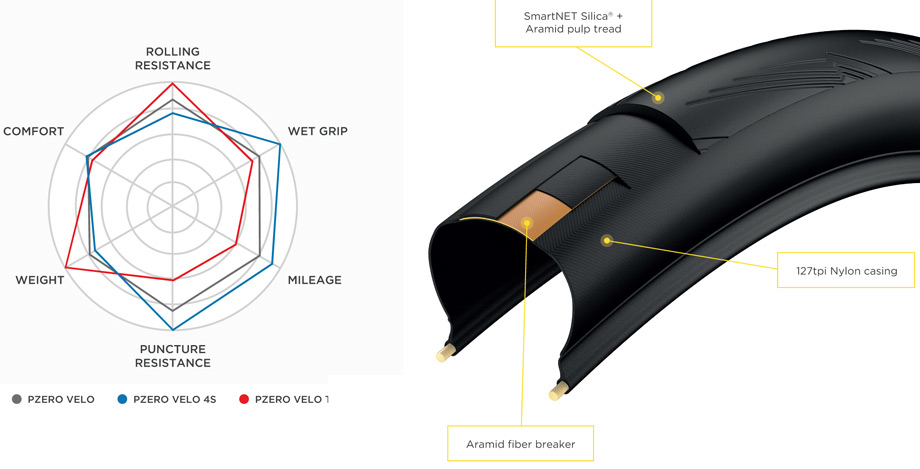 There’s still a central slick section on the 4S also made from the SmartNET Silica compound that will give very good rolling resistance, but the 4S quadruples the flash pattern at the middle and sidewall of the profile (maintaining the variable channel depth) trading a bit better traction in variable conditions for the better rolling resistance of the single flash RR profile.

The TT profile is Pirelli’s fastest rolling, lightest and most aerodynamic option. 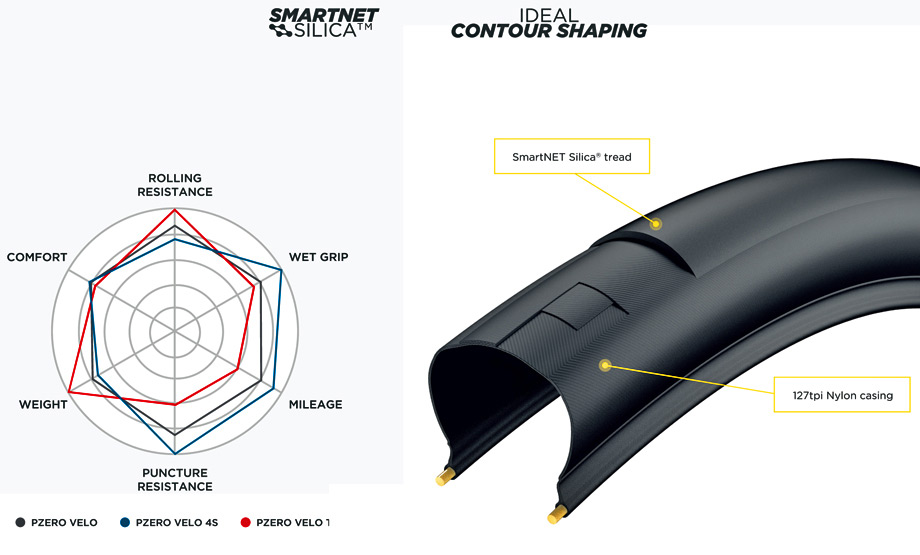 This is the same 127 TPI casing and the tread compound is SmartNET Silica but the TT will forego the additional aramid fiber reinforcement.

The size here is currently 23 only and the weight for this section is 165.

A full slick, the compound is designed to provide superior handling and grip while giving the lowest rolling resistance and wind resistance in the range.

Pirelli’s extensive experience and R&D capacity allowed a team of experts to recreate the tires in Formula 1 so that the drivers could race all out rather than driving conservatively to save tires. This same team is responsible for the creation of the SmartNET Silica compound for the PZero Velo.

Silica compounds are not new to cycling or tires in general, but the SmartNET Silica particle is an advance from Pirelli that allowed them to create a particle that is much more suited to Cycling.

Generally speaking, Silica particles in the past have been more round or uniform in shape. But the particle for SmartNET is actually a rod shape.

Of equal importance is that Pirelli created a process for making a compound that combined the rod shaped particles with 17+ other compounds in a way that, when properly combined, heated and pressurized, create a matrix where these rods both disperse evenly within the composite and lay out in the direction of rotation.

The “NET” in SmartNET… The rods also maximize the surface area that the other materials bond to and create a structure that is more stable (creating less heat) and stronger than typical Silica compounds, but also remains fairly flexible and naturally less effected by water. That makes for the durability associated with harder compounds but with traction more similar to very soft compounds.

As for the Casing, I can say that while it’s not a massively high thread count, we sometimes forget that the number of threads means very little without understanding what the threads are made of and how they are produced… The casing for the PZero Velo range is very flexible / malleable… 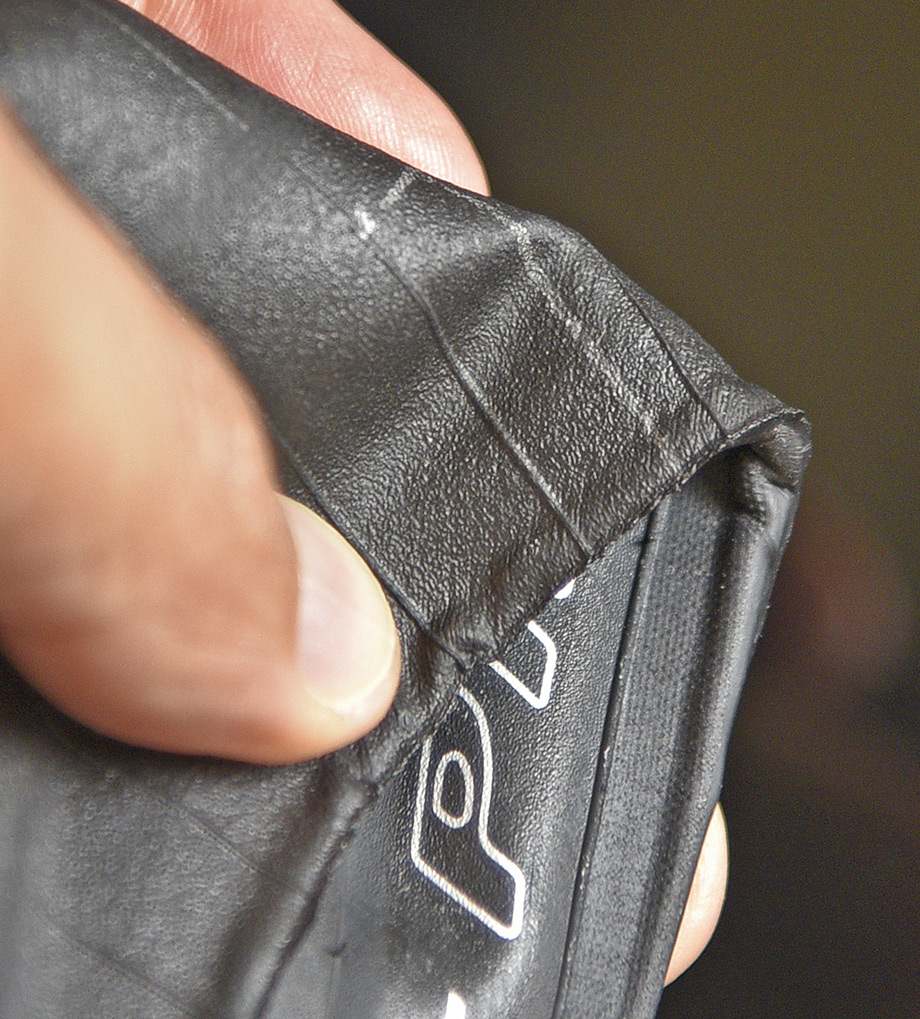 The set of PZero Velo RR tires I have sitting here at home are equal or more supple in-hand than any of the tires I have from several top producers.

I can also say that in the short amount of time I spent at Pirelli’s Vizzola test track, I repeatedly went ripping onto their cobbled section at 30+MPH and was fairly impressed with the feel I had not only at Pirelli’s relatively high preset pressures, but also after I broke the rules and dropped those pressures 10-15 PSI… 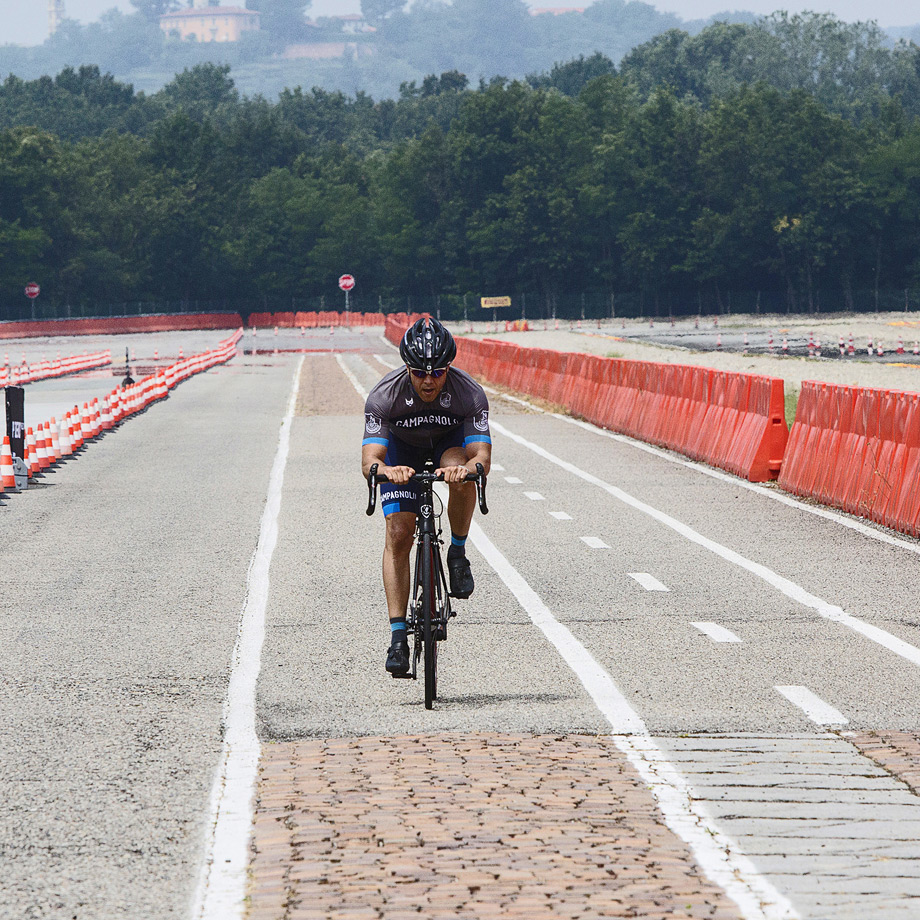 Several journalists spent quite a bit of time rolling round the hills near the test track along with the Pirelli test riders and the comfort for the given tire pressure was very good (borrowed bike, but familiar wheels and my own saddle). 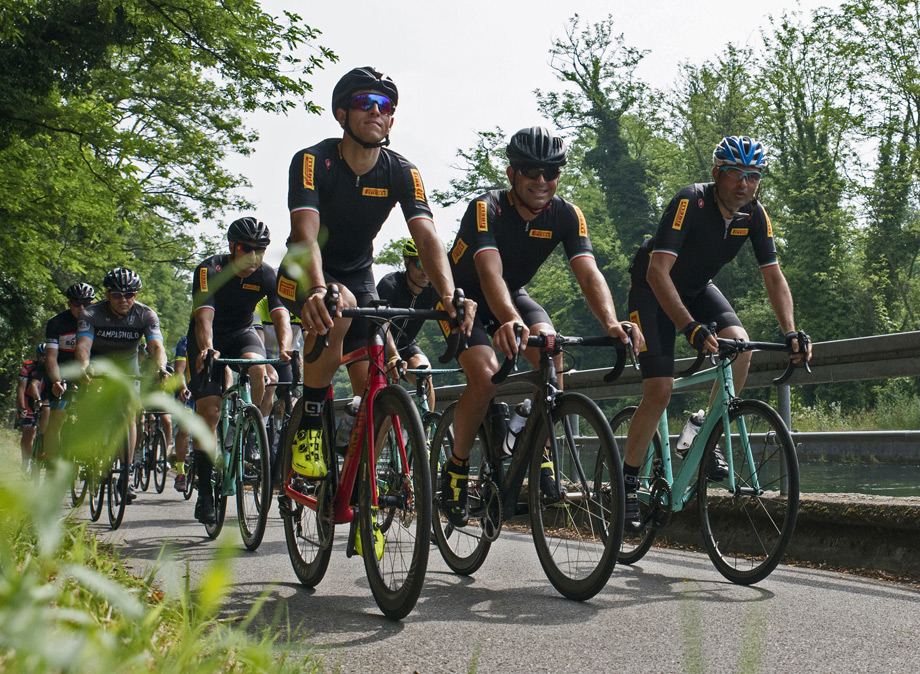 And while Pirelli set us up for some “wet behavior” by turning on the sprinklers and dousing us for 20 minutes, I thought better of pushing myself to the point of testing the limits of traction. . 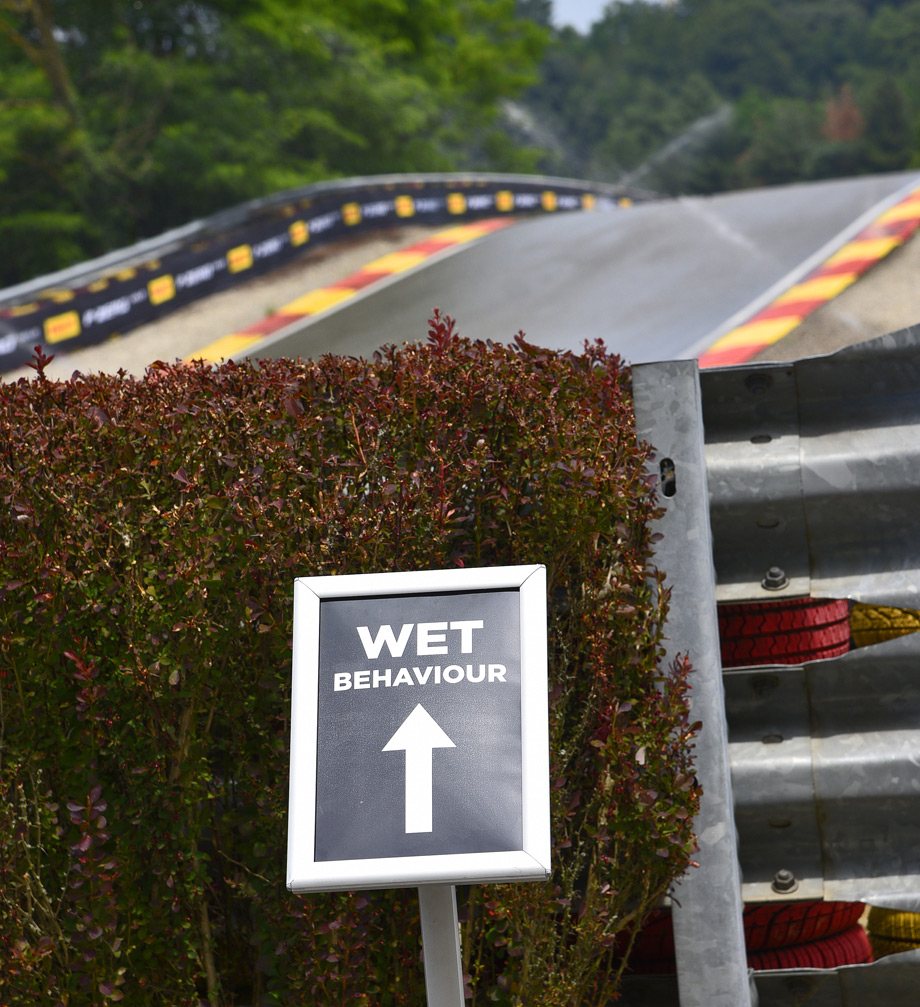 Unlike two of my counterparts that misjudged an off-camber 180 with 10 feet of drop and either went off track or crashed (or in one case, both). I did go quick enough that I could appreciate the feel in the wet and the traction was very good, but Pirelli only had one set of leathers and they were filled with the guy that owned them… 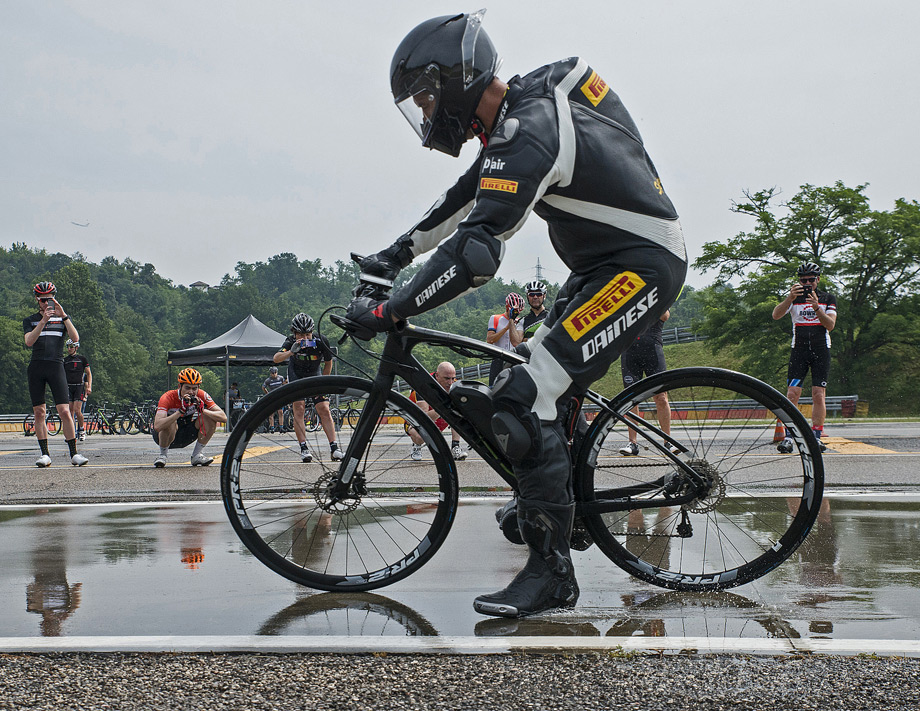 This guy was flying round the G force circle at a speed that I would only have tried with the same outfit. Road rash and 15 hours of flying really don’t go hand in hand though, so I kept within myself.

Handling and traction in the dry were very good as well and once we were away from the roads, we were allowed ample opportunity to haul ass around some twisty bits to get a pretty reasonable feel. 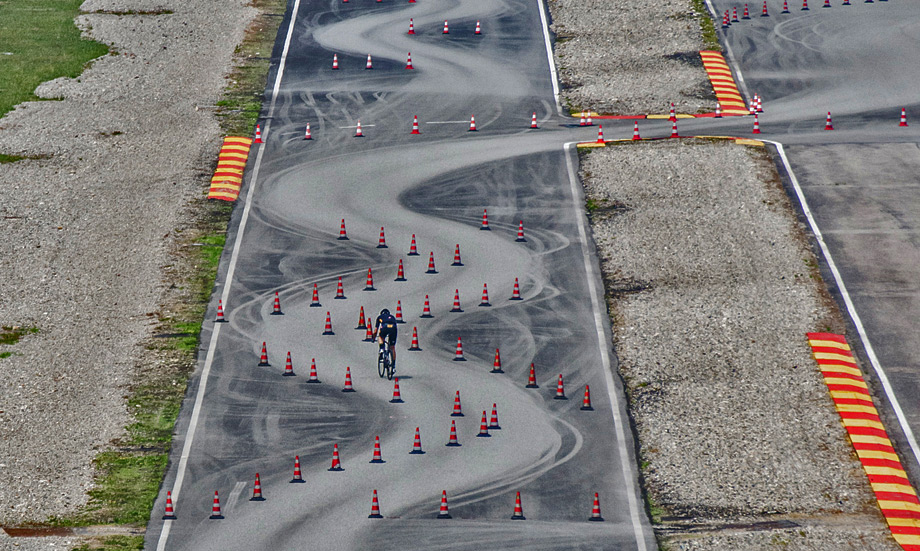 Pirelli are immediately in the game

I certainly can’t comment on the durability or longevity of the tires. The closest I can get to commenting on that was to say that our entire group rode through a very large spread of recently broken glass and while I heard the tires crunching away and was wincing and waiting for the bangs to happen, nobody flatted… It was odd. Certainly not scientific, but the fact that nobody blew a tire was a real surprise.

I can comment on the road feel and comfort. For the Pirelli PZero Velo RR tires we had the chance to sample, the roll was smooth relative to the surfaces we traveled over both at the track and on mixed surface pavement (from “this might have been here before world war 1” to slick new surfaces).

I can also say that I have no doubts that when tested, these will have good Rolling resistance numbers relative to other high end tires.

And I can say that I was very happy with the traction, both on the road as we came upon some typical Italian traffic on damn narrow streets while going a bit too fast as well as rounding fairly tight corners with wet/dry patches… Never mind the sprinklers on a green, off-camber buttonhook 180, which also wound up not being a problem for the guys who understood what an apex looked like.

Pirelli’s Milan facility is incredible. The teams of people that worked on this project and the capacity for understanding and developing tires is fantastic. Pirelli’s R&D budget relative to revenues is high for the automotive industry and that creates an environment so far beyond what is typically available for bicycle product development that it dwarves some bike tire companies entire operational budget. 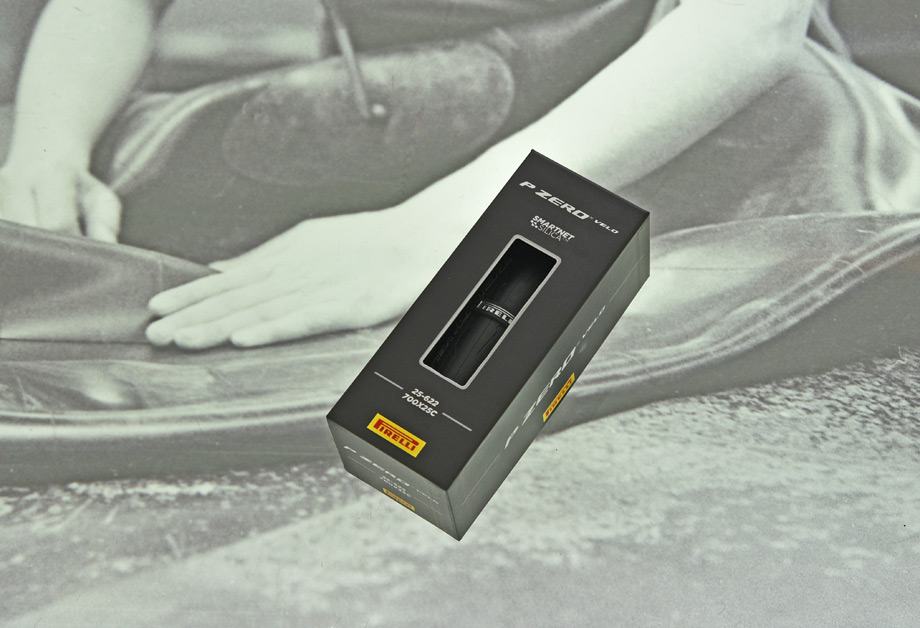 All should be available in August.

Until then, you can see more details on all of the new Pirelli PZero products launched PZeroVelo.com

Ah, and if you’re hunting a bike with two less pedals and 200 more HP, pop in to GOAZ Motorcycles

Equipment Nostalgia – The Clothes We Would Rather Forget!