No hiding from Power Cranks!

Today we have before us the Definition of Ego Killer and possibly the most effective training tool around.

I have for the last couple of years listened to the praises of others about having a wonderful spin. My ego hath runneth waaayyy over! Heck even Frank, the guy from Power Cranks / Cycling Innovations wrote; “I remember you at interbike well, as I had never seen a non-PC (Power Crank) person as good as you before… I expect your adaptation will be much easier than even the average pro.” And this after handing them out to the likes of Johan Museeuw (who also had some ordered for his training partners), Paolo Bettini, Stefano Garzelli, Steve Larson, Mario Aerts, David Clinger, Daniele Nardello, and Axel Merckx . 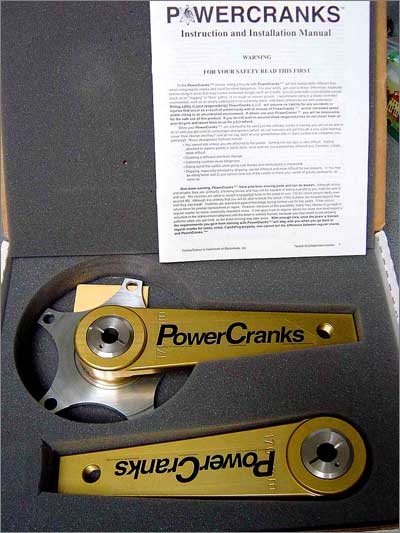 Well if, after using these things for an hour the first time, the average pro wakes up the next day feeling like a herd of 500 wild Zebra found the only escape path from an attacking Lion to be over their thighs, then I am truly better than the average pro! I say this because I only felt like maybe 150 domesticated Zebra had casually galloped across my legs… And I loved it!

With everything from Biopace chain rings to the latest cranks from Rotor trying to make cycling easier (which basically lets your legs get even weaker where they are already too weak). Power Cranks simply aims to train away the weak spots in your pedal stroke and make you a better cyclist. The idea is that these cranks operate independent of one another, which means that your upstroke leg doesn’t get a boost and get carried over the top from your down stroke leg. Sounds simple right? Try it!

I would venture that any past review of these cranks that says they don’t do anything, came from reviewers who didn’t use the things long enough to make a difference or got discouraged and didn’t use them at all. They are not so difficult to use to prohibit anyone from trying them, but they do need a little time. I would highly recommend the first few tries be done with a trainer rather than with Traffic!

The Cranks themselves are extremely simple to install and can be done in about 15 minutes (given the fact that you have an extra 12 pack of imported Bee, er um, Soda pop to bribe an over worked but good mechanic at your local shop (Thanks Brady at Bicycle Showcase!) My point being, unless you are a good mechanic, just let a pro do it… The guys will be all smiles as they stare at the cranks once installed properly, and see both pedals hanging down side by side below the bottom bracket! They can engage from any angle, meaning each leg is basically doing all it’s own work, but when not in use they hang slack. 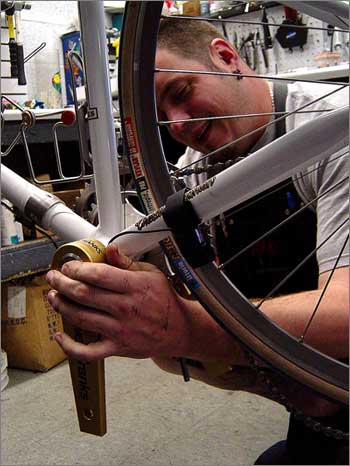 Power Cranks are of high quality and solid construction (so solid that they should be able to shave a few grams and still have the most solid piece of equipment in the history of cycling). The bearings, finish and packaging are all top of the heap. These come in a few sizes and also come in a super length adjustable size that will allow you, with the help of a CompuTrainer or other power measuring devise, to not guess at but actually see where the most efficient crank length is.

I have seen a ton of useless training aids in the last few years, and have listened to people preach a ton of different work outs and “scientific” methods for getting a more powerful and complete pedal stroke. This simply performs, and does so ruthlessly.

I don’t care what you do, but doing it while riding these cranks makes any work out better. Weather it be high cadence, low cadence-high resistance or single leg work (or a power crank special, out of the saddle single leg work!) all allow for loads of cheating on the upstroke with anything but these cranks. Not only will you be generating power where you have not in the past (across the bottom and over the top), you will also be removing a lot of resistance now placed against your down stroke leg because you will no longer have the upstroke leg applying pressure (and the amount of dead weight the upstroke leg actually is will probably surprise the hell out of you!). The folks at Power Cranks speak of some fairly large power increases and I would imagine that putting a large group of under utilized muscles to work would do just that. I have always put far more emphasis on pulling under, up and over than I have on pushing pedals, and these let me know just how poor a job I have been doing!

Over the next few months I will be riding one these on the rode and on the trainer. If the effects of day one are any indicator, I am going to love the results come late spring! I can’t remember the last time I got this much out of a simple single hour on the bike. Honestly, I didn’t get that much out of the ride before last, and that was three and a half hours of alternating high Cadence and low spin resistance work while maintaining base training heart rate. I can’t wait to see what my spin scan on the CompuTrainer looks like after a few weeks on these things!!!!!!

Learn more about Power Cranks at their website:
www.powercranks.com