Power (or is it Finesse?) Cranks.

I just talked with two guys who are so good at what they do, people pay ‘em to be in cycling (so go ahead and hate ‘em even though they’re great guys…). Most of the time when you’re calling people to talk about a product, you get the clichй answers from folks who are paid to use something. Not so when I spoke with Todd Herriott of Team Health Net and Dr. Max Testa about PowerCranks… 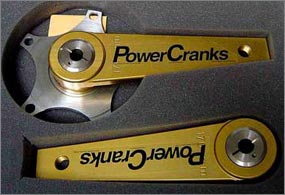 This was supposed to be my long-term review article, but due to a muscle tear, followed by a bug strangely resembling the same thing that knocked George Hincapie off the bike (I feel ya Bro!) I was forced to get on the horn with a few other people for the beef on PowerCranks over the long haul. What I can tell you in terms of personal hard data, is that my CompuTrainer spin scan rating jumped into the High 80’s – Low 90’s (Meaning that my power was being applied in close to a perfect circle). What that means is my down stroke leg wasn’t being forced to lift my upstroke leg. That also means that I was using most of my energy to move forward rather than carry my leg around… And it meant that my Heart rate at a given power production at the same 300 watts, was 6-8 beats lower (@ 4%). Take into account that that was just during base phase and before I was trying to develop any power and was only using the Cranks for 1 month and a half! But enough about my thoughts… (even at a pathetic 4% increase, that’s a full minute off a 20k TT…) 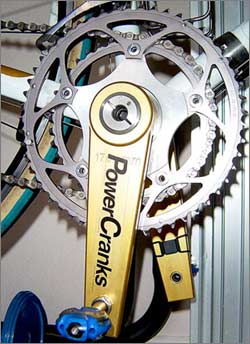 Subject A: Todd Herriott, Team Health Net
I spoke this morning to Kevin Herriot, Team Health Net’s latest signing, who is making his pro Debut at the Tender age of 34 (Which more than anything, pisses me off by spoiling my age excuse…). He has been on the Cranks for almost two years and calls himself and absolute advocate. “By far the most notable advantage is climbing. I can sit and roll when everyone else is out of the saddle on climbs. I can also roll on the flats in gears I couldn’t push before…” He commented that his “significant other” notices the muscle change. “She says I look deformed… My Hip flexors are like baseballs under my skin from using them.”

The bottom line from Todd is being able to produce power from a full stroke while other people are standing (needing to compensate for weak spots buy producing more power in other positions in the pedal stroke), and burning less energy to produce the same power. That’s not a bad thing…

Subject B: Dr. Max Testa, UC Davis Sports Performance Lab
The next call of the day was from Max Testa! Yes, that’s the same guy that has basically done it all seen it all and coached em all. That’s Motorola, 7-11, MG-Technogym and my all time favorite team (who need to get back into cycling!) Mapei.

Dr. Testa was quick to indicate that fully controlled study is still needed, but that preliminary impressions from several high caliber athlete’s had been very positive. With riders like Danielle Nardello and Stefano Garzelli liking the results and producing more even power output from using them. He had also seen some 25 – 30 watt gains at LT (lactate threshold) in people using them for the first time, but also said that other training stimulus were present. He calls them a “very valuable tool” and something that forces everyone, pro’s and amateurs alike, to be more efficient by forcing you to carry the weight of the up stroke leg and also maintain force through the entire range of motion. “It’s something that nothing else forces you to do and it makes you do work that is without a doubt of benefit.” 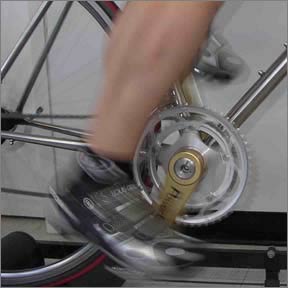 This photo shows what happens when a rider gets lazy with PowerCranks.

For those of you who don’t try sneaking a peak at top level cyclists’ power meters while they’re doing LT tests, that 25 – 30 watt gain at LT is in the area of a 7% (or more) increase for the highly trained athletes that Dr. Testa deals with. That is significant in two ways. First, that it comes from people who are already trained (so it’s not some guy who could get a big gain by just simply starting to exercise…) and second, it is that 7% would be the difference between winning a TT and placing out of the top 30. It should be noted that working with a top caliber man like Max (of which there are only a few world wide…) will mean that people are getting better regardless, but these gains are super… (We understand that a great many things effect times, speed etc. Using percentages is a simple way to generalize results.)

All in all, PowerCranks are under a who’s who of riders around the world, and probably the only reason that you don’t hear about them like you do other training devices is that Power Cranks don’t pay nearly as much as other companies do on pro endorsements. In fact, several pro’s that I have spoken to don’t want anyone knowing that they ride ‘em. Damn sad in this world of over hyped crap that does nothing but cost you time and money that there are so many other things on people’s shopping list ahead of PowerCranks, but I would bet that changes as more and more people find out who’s on the things…

Life In The Gutter: The 5 M’s Of Bisbee

Inside Georgia: Macca Wraps From Belgium