My most recent custom build is a Moots RSL titanium road bike. So much went into the creation of the project, that each part bears its own story. I spec’d the ultra-light and super low profile Cane Creek AER EC34 headset, and honestly didn’t expect it to warrant a stand alone piece, that is until I took a much closer look at the tech here…

PEZ Sez: This is the second in a series of reviews that chronicle the creation and build of this custom Moots RSL. In Part 1 we looked at the raw frame. Subsequent entries will look at the individual parts and components that went into this one of kind bike.

Head It
Maintaining my nod to clean aesthetics, I wanted to keep the front end appearance clean and uncluttered. So to avoid an unsightly big stack of spacers between the headset and bar stem, we lengthened the headtube from Moots’ standard length of 11cm to 12.5 for my frame, eliminating 15mm worth of spacers right there.

Then I went to CaneCreek.com, whose AER EC 34 headset (AER means ‘atmosphere’ in Latin) offered a low profile for the top bearing, about 8mm versus 16mm for the same bearing on their 110 series. 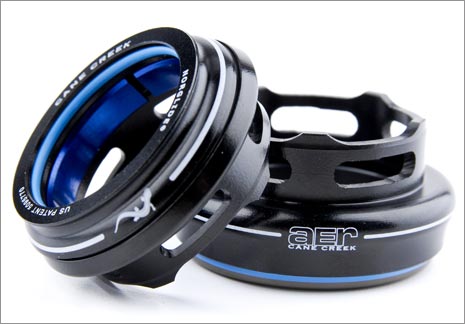 The AER shows off a very low stack height – this is all of it.

A lot of guys would choose this headset as a super trick ultra-light part, because it weighs only 46 grams, and in fact that’s it’s real reason for being, and Cane Creek is up front about it not being intended for long term use without recognizing some possible durability issues. Fair enough.

And while I wasn’t complaining about the weight, I really liked the low stack height.

We first saw Cane Creek’s AER headsets at Interbike in 2009, and Charles took some great pics of how much machining of unnecessary material takes place to peel out grams from every possible place. 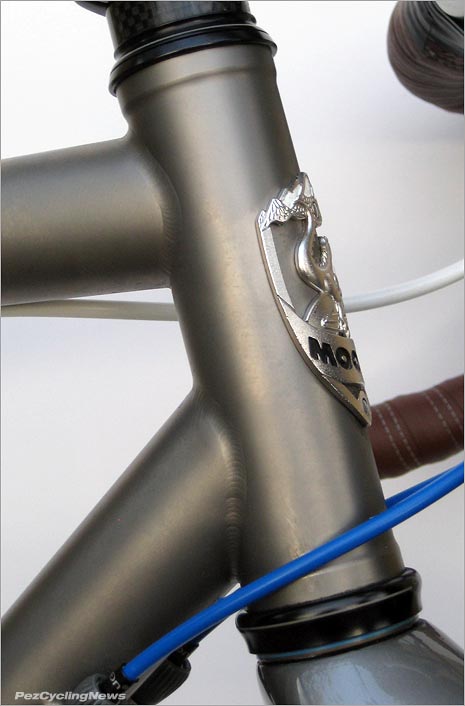 The AER EC 34 uses a Norglide bearing for the top, which eliminates actual ball bearings which can weigh 16-20 grams for a normal 1-1/8th size headset. Instead, they use Norglide’s patented sliding bearing – two very smooth pieces of metal whose outer surface is coated in PTFE (which is the same material as DuPont’s trademarked ‘Teflon”coating) – the solid with the lowest coefficient of friction known to man. It’s darn slippery, and it works. 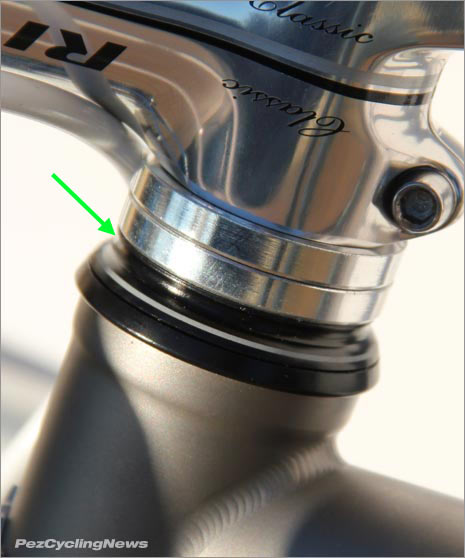 The arrow shows a concave section around the cap where material has been removed to shed weight.

The bottom uses traditional ball bearings in a normalized cup, to best handle the radial and axial loads that come when riding the bike, and offer better performance under steering and braking. 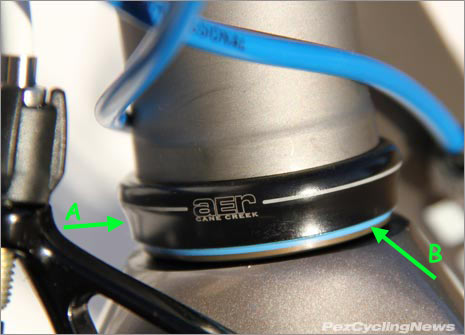 Arrow A shows the concavity where material has been machined away to reduce weight. Arrow B shows the shortened length of the bottom bearing cover, leaving the rubber seal exposed, again to reduce material and weight where it’s just not needed.

The only caveat is that they recommend replacing the Norglide bearing every 3000 or so miles, about every time you might change your chain. This may not last as long as a regular style headset, but the race swap takes about 5 minutes, so not really a big deal. 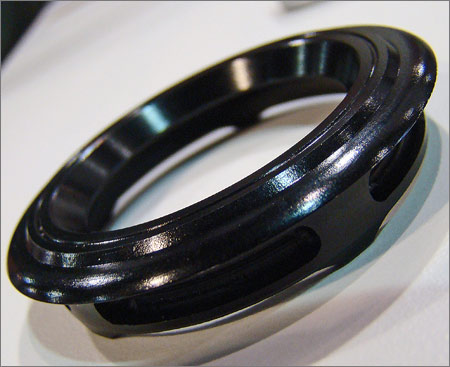 The replaceable Norglide bearing sits just inside the top cup, pictured here in the ZS44 model. 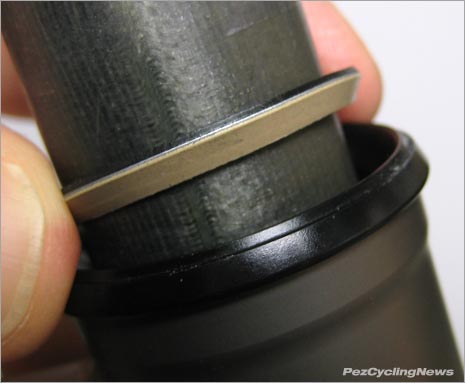 The Norglide produced bearing isn’t designed for longterm use, but is easy to replace.

On The Road
After logging several hundred kms on the bike from February a couple of issues did arise with this first generation Norglide-bearing from Cane Creek – which have been addressed in the “Series II” versions now being shipped.

First was the adjustment of the headset tension, which I found a bit finicky with the Norglide bearing. Essentially I struggled with tensions that were either too tight or too loose, and warranted a call to Jim Morrison, Cane Creek’s resident “Headset Guru | Design Engineer”. Jim really knows his stuff and over the course of a few emails and phone calls proved his primary interest was in answering my questions thoroughly.

The bottom line is that while the original version I’m running was their first generation of this type of design, they’ve improved and refined their manufacturing process to deliver tighter tolerances for a better fit, resulting in an easier setup, and better performance for their 2nd generation AER designs. 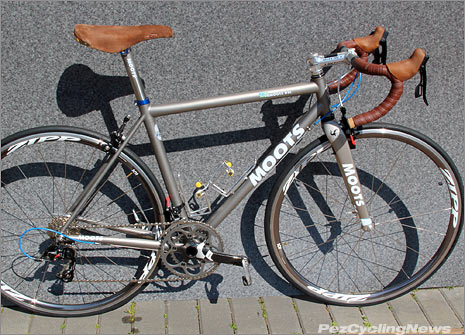 Let’s not forget what the whole Moots RSL package looks like.

I should note that the reason the tension issues came to light was not in any way related to the bearing slipping out of adjustment while riding. In fact it’s held tight every ride I’ve been on. However I did spend a fair amount of time adjusting my bar-stem fit, which meant a lot of removal and loosening & tightening of the headset, including a fork swap. My adjustment issues only became apparent after I’d taken the stem off a few times.

My other issue was a small amount of rust build up inside the lower end of the head tube, which I discovered during a fork change. I emailed Jim for an answer, and it was so thorough, I’m just gonna let him take from here:

“The nasty brown substance you’re seeing in the bottom cup of your headset is actually just rust. It is a result of a few things, the main reason is that the lower bearing on the AER headset is a mid-level 40-Series bearing that is constructed from a high-quality bearing steel. The steel is very hard, and very wear resistant, but it is by no means stainless. The black oxide coating on the bearing helps to retain oil, which provides a little corrosion protection but any prolonged exposure to water will result in oxidation. This bearing choice was made mostly in order to keep the cost reasonable to the consumer. Stainless steel bearings would help with the corrosion issues but the material is extremely expensive and results in a bearing that is 3 times more expensive than a comparable regular steel bearing.

Now you are of course wondering why water got in there if there’s a seal. The reason that the water got in there is because the seal itself interfaces not with the cup, but with the outer race of the bearing. Thus, the seal is really only meant to seal water out of the bearing, but not really out of the cup. You mention that the headset seems to work fine and that is because water has not made its way into the innards of the bearing. It has however made its way between the bearing and the cup (there is a 0.05mm gap between these parts) and because the gap is so small, once it’s in there, it doesn’t tend to come out. The result is rust on the OD of the bearing. Also, if you’re getting into enough water to rust the lower bearing, there’s probably also water getting into the top of the headset. The Norglide material isn’t really affected by water so the top of the headset isn’t really sealed. A side effect of this is that some drips of water will attack the lower bearing from the inside of the head-tube. This water literally just drips, so the seal on the bearing itself is quite up to the task of keeping this water out, but again, the exposed steel edges will rust up pretty quickly. So it may not look pretty, but it still operates just fine and that was the real design goal. If you ride in really wet weather a lot of the time, it could be worthwhile to upgrade to our stainless steel 110 bearing. It’s a direct replacement.

The main thing to remember is that the AER was designed as a light-weight at all costs headset. Long-term durability was not really a design goal. That said, the new AER Series II headsets that are coming online in January have stepped back from the “at all costs” mentality and are much easier to deal with and longer lasting while only gaining a little bit of weight (literally 3-8 grams).”

That for me, was consistent with all of my experiences with Cane Creek – confidence inspiring. And if you’re like me, you’re less concerned about a part underperforming than knowing the guys who made it are either working it make it better, or have already done so. That’s the kind of progress I like. 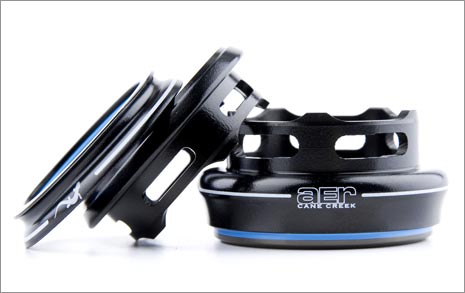 • See the website at CaneCreek.com for a dealer near you.

In the coming weeks I’ll take you through the addition of each component and full build up of the bike.