The Proviz Reflect 360 jacket uses a fabric that’s as close as I’ve ever been to thinking something might be too visible at night… Oh, and the rest of the details that allow this swatch of material to be considered a jacket are not bad either… And we get their Nightrider Pack cover as well.

Not getting killed is a bit of a priority for me… With that, it was great to get a hold of Proviz new Reflect 360 Jacket and Nightrider pack cover. 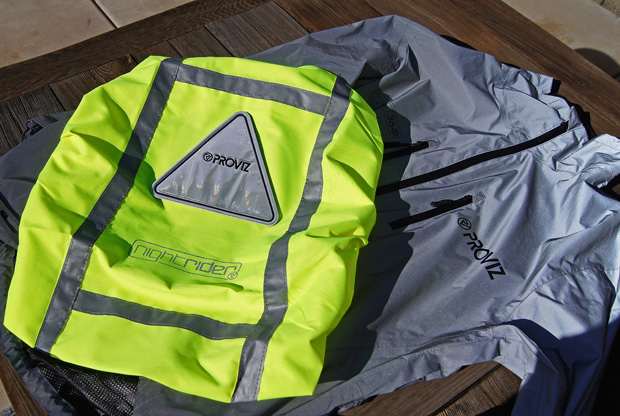 Proviz were founded in the UK in 2009 by a couple of riders that quite simply knew that better visibility could be had.

While just about every brand has some sort of high-visibility clothing, Proviz have been pushing hard to go beyond simple accents and a couple of bright colors and have developed a line of fantastic kit, all of which I want to own for my pre-dawn work commute and night time riding…

I’ve shown bright clothing before at Pez, but nothing prepared me for difference in night time visibility to motorists provided by the Reflect 360 Jacket. 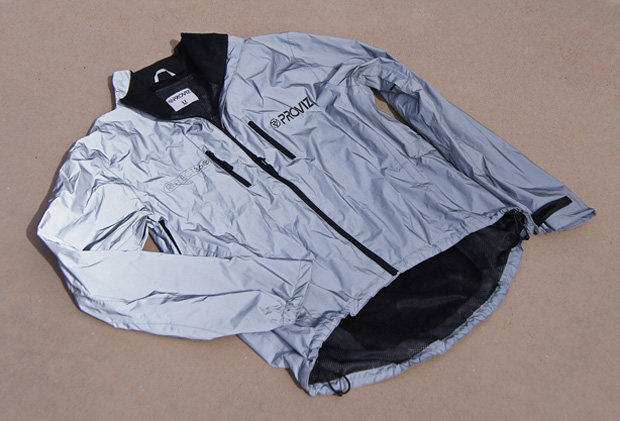 When there’s no light source around, the Jacket is a fairly reserved grey. But plopping it on the ground in daylight, you can tell that the fabric has a bit of reflectivity to it. As you walk around it, the fabric appears to move and morph while reflecting the sun.

That was my first taste of the jacket and my initial impression was that I honestly wished it came in Yellow or orange or green because this wasn’t overtly bright. That thought would change later that evening as I had my daughter stand in front of the car… 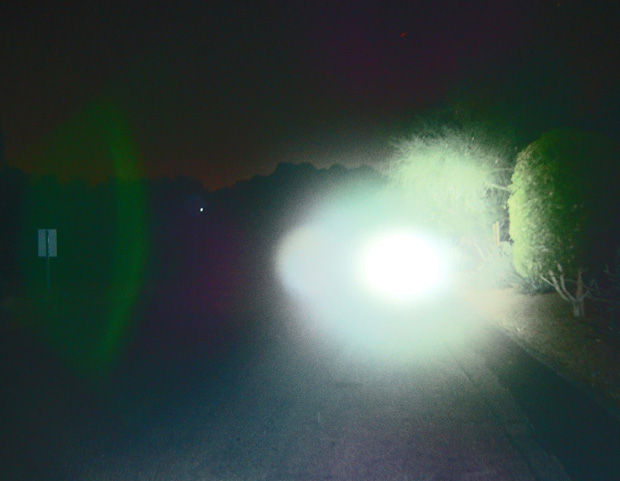 What you’re seeing isn’t the cars headlights… This is the reflection off of the jacket as I snapped the picture while standing next to the car… The light returned from the Reflect 360 is simply stunning. It almost seems like its being amplified rather than returning a portion of the cars headlights.

The way that this garment can reflect like this is a process that embeds glass beads right into the material. They’re incredibly small and also a fairly specific shape that makes them direct light especially well back to the source of the light (the car or moto…) and, perhaps just as important, do so at a broad range of angles from the surface of the jacket… Meaning the whole thing gathers up the light and tosses it back at the source with fairly good focus.

This process also needs an appropriate backer color to do this with such extreme force / effectiveness. I asked about making these in colors that would stand out in the daytime and they confirmed that this base grey makes for the brightest possible reflection. They’re calling it a more reserved color for daytime that is less in-your-face and I would agree. But as someone who rides to work in the dark early morning and home in the afternoon, I like bright colors… (more on that later as they solved it with a pack cover pretty damn well).

Aside from the fact that it can probably be seen from space, much less being seen from great distance by motorists traveling with headlights, the rest of the details here are very good.

The collar is plenty high enough that I don’t have to wear any other neck protection down to temps of roughly 30 degrees. 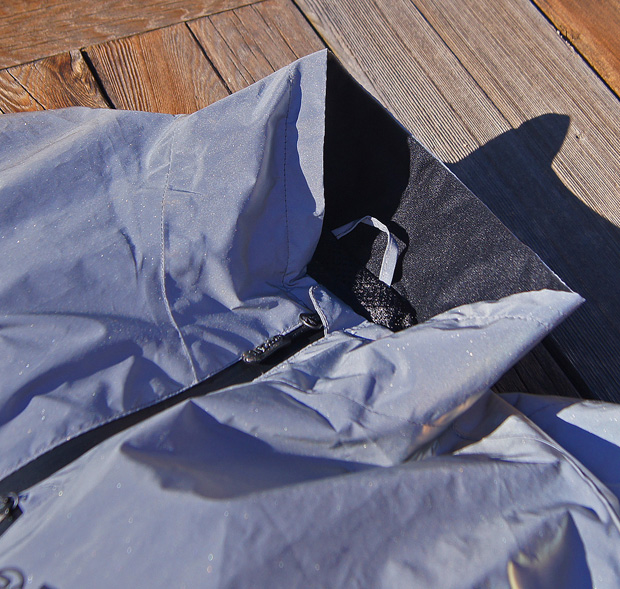 The material is wind and water shedding. I wish I had a little more info on the waterproofing, but the material for the jacket is a low temperature laminate that Proviz have handled for them in Norway… All I can say is that on the one day that I used it in the rain (it’s Arizona people… I had to wait for it to rain and then drive home to ride the jacket…), I was very happy with the performance at speeds to 20-25 mph. Zero problems (other than me never wanting to ride even a mile in wet).

The zippers are top quality and they’re all taped / sealed… (The low temp laminating process helps with this, all the way out to the seam taping). 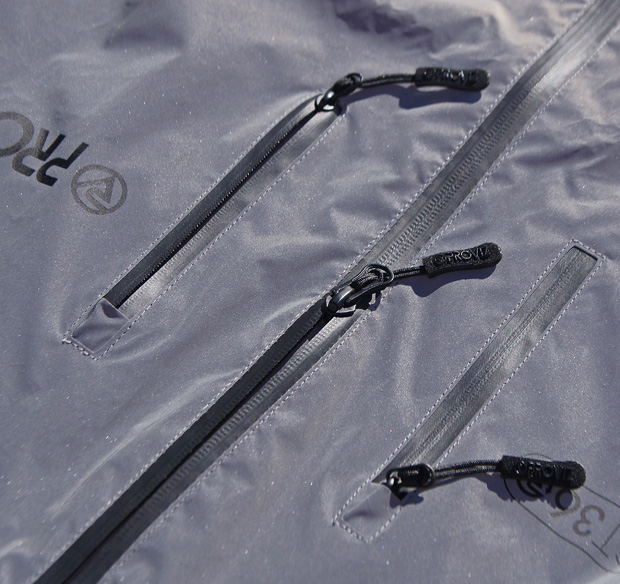 The two front zippers are reasonable sized pockets large enough for phones that are damn near small tablets at this point. They also vent to the chest.

There are underarm zippers as well. Open mesh for venting. 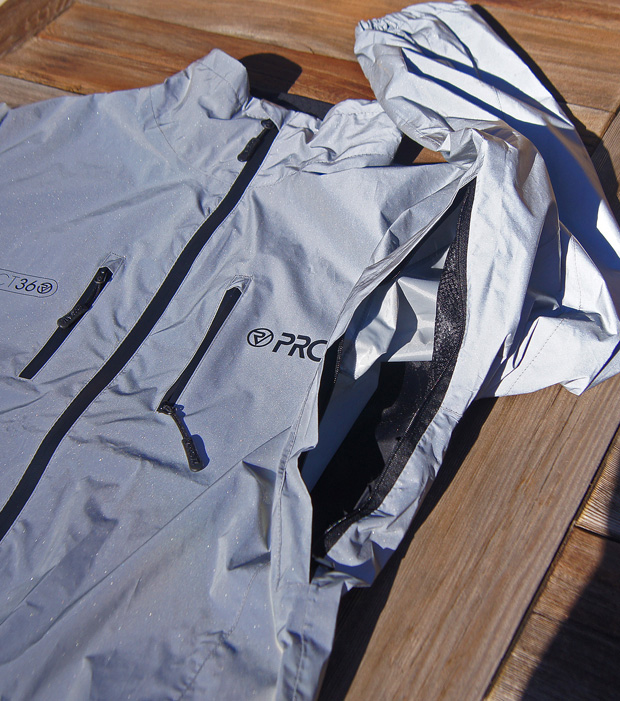 Ah, and the cuffs can be left open wide and or Velcro adjusted. They also have a bit of elastic. 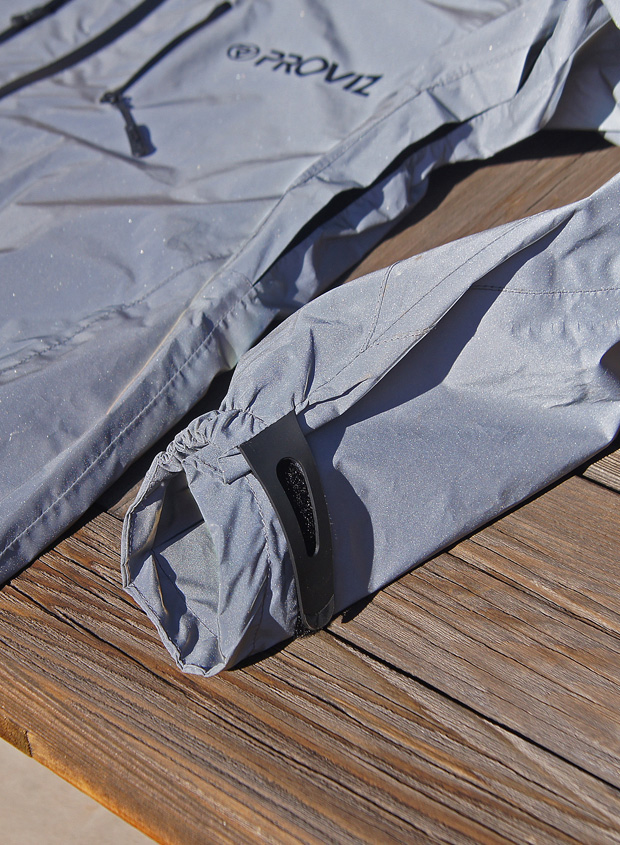 The vents work along with rear shoulder vents to do a really nice job of shedding heat and moisture. 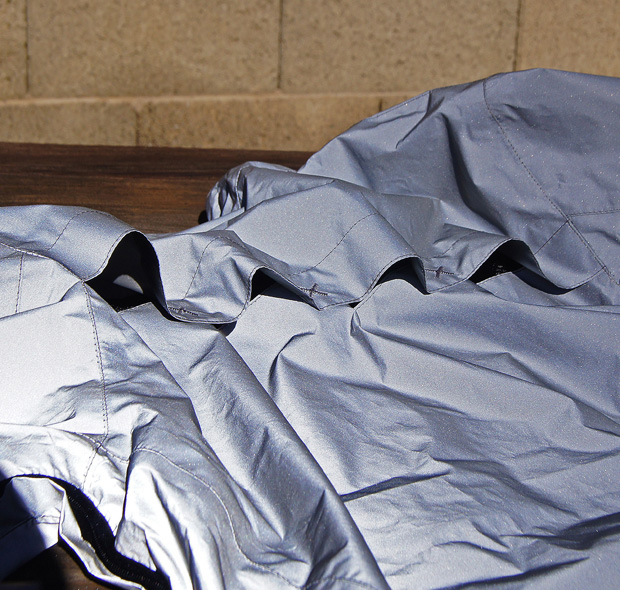 The jacket is fully mesh lined with a bit softer wicking material around the neck. And the length is cycling friendly with enough overlap to cover most butts… 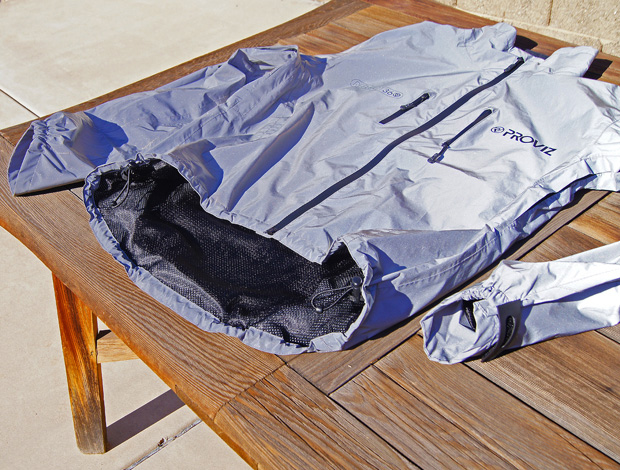 There are also adjusters to snug the waist…

Finishing things off is a good sized rear pocket that is also well sealed. 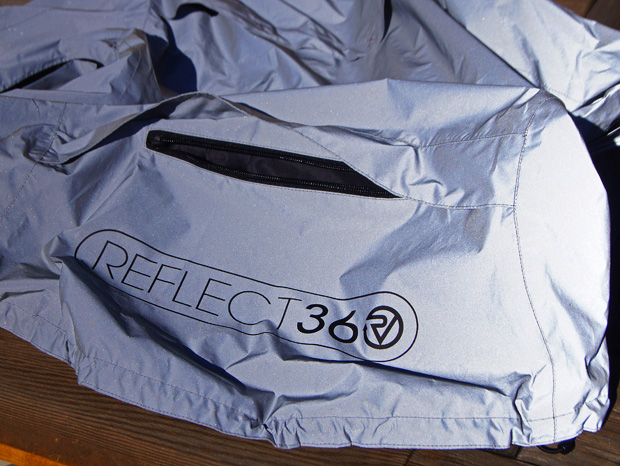 All in, this would be a very high quality jacket even if it didn’t give off enough light that drivers will need to squint as they go by…

It went through this winter (though Phoenix is admittedly mild) like a champ and the durability has been very good. No chunks of taped seem coming loose, the liner and all of the stitching basically look like the day it landed.

It needs mentioning that the fit is more commute than performance minded for sure. The Reflect 360 is a little roomy for thin folks and the cut isn’t a “race” fit for reaching long and low.  I would love to see this jacket in a snug, performance fit (with back venting and maybe some permanent underarm openings) and I would also like to see colors.  Because this jacket is a base grey color and I commute home in daylight, I wanted something made in a color that really stands out.

With that, Proviz also sent their booming yellow Nightrider pack cover.  This is just the right tool in the case your pack is less than high vis… Or in my case, massively low vis. 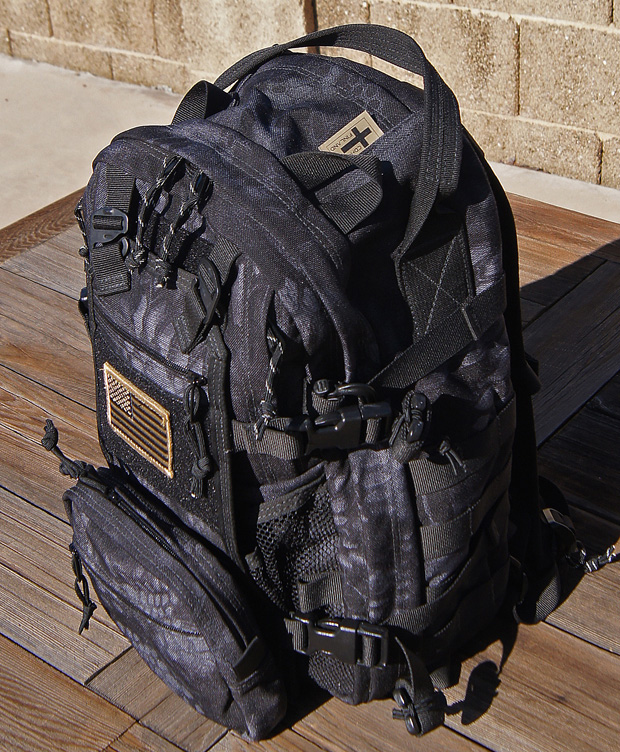 Custom pack from CDH-Tactical in Finland

That’s as dark as it gets for a pack, but in seconds it goes from “you can’t see me” to HHHHEEEEEEEYYYYYYY, IM RIGHT HEEEEEEERRRREEE!” 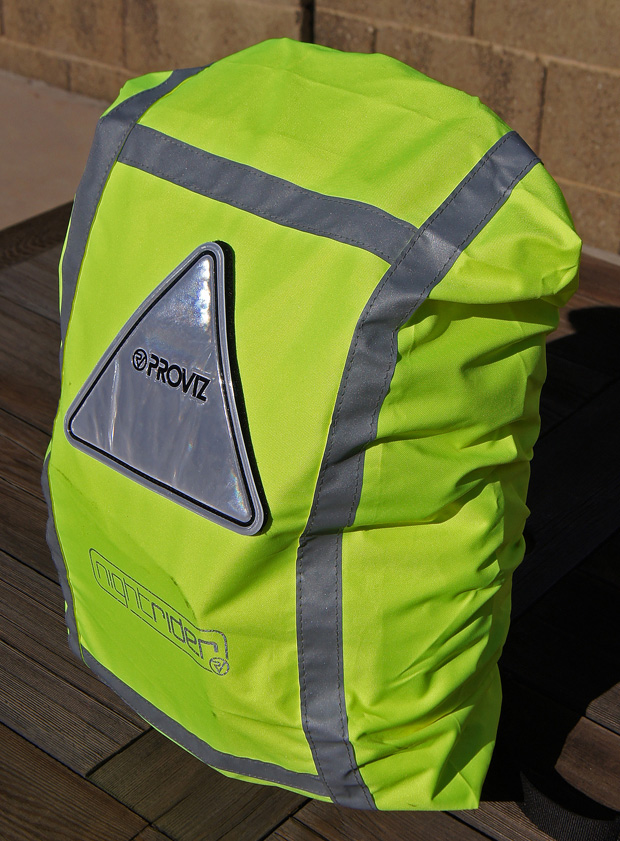 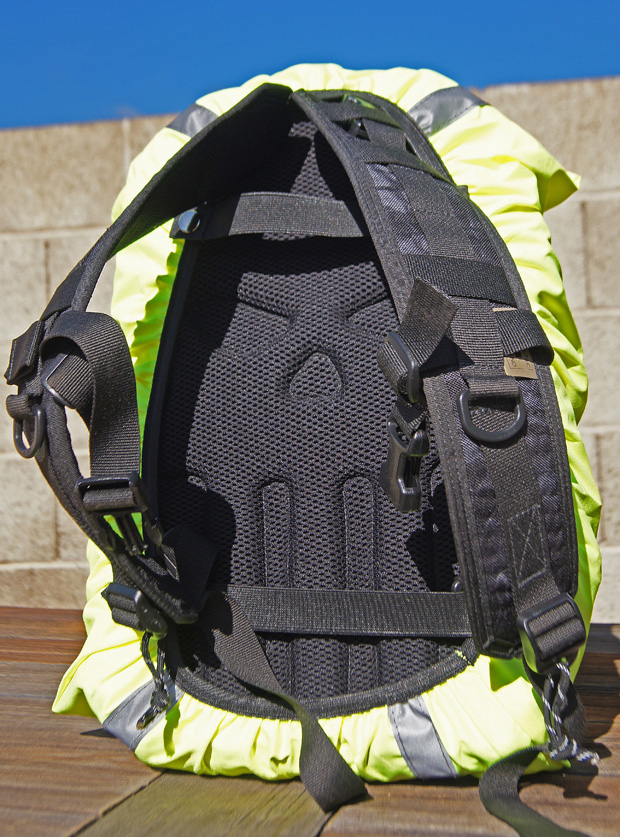 And this isn’t just a super bright color. The silver strips are super reflective as is the removable velcro triangle. 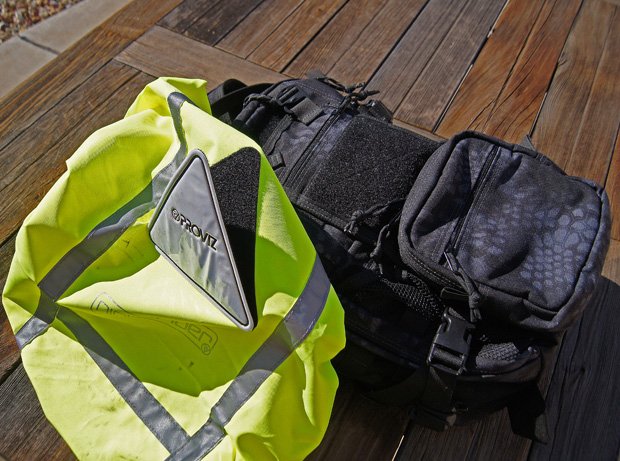 Proviz have a powered light that also attaches to this Velcro (or any Velcro patch of the right size) called the Triviz Light Pack.

The construct here is solid as well. This feels and looks like a substantial piece of gear for as simple as it is… (It is also waterproof and fits packs up to roughly 35L) 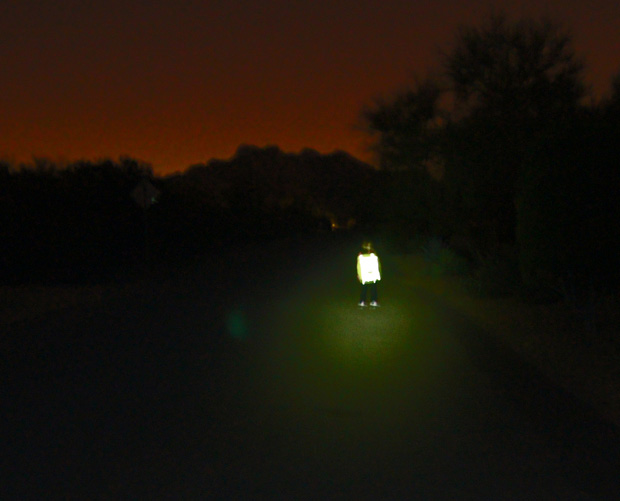 So here’s the deal…

Stand alone, at night, The Proviz Reflect 360 is bright enough when hit by headlights that cars might try and avoid it altogether for fear they’re about to be abducted by aliens…  You don’t need to be concerned about visibility in the dark regardless of what kind of backpack you’re wearing because the reflectivity on the entire jacket (including your arms) is so high that blocking the back might be doing people a favor.

But in the daylight, you still want that visibility and the pack cover is a GREAT addition, especially if you’re warm enough in the daylight that the jacket is no longer needed… At that point, you’re wearing an exceptionally bright piece of kit that doesn’t need an external light source to be easily seen.

[UPDATED!!! I just saw a new Proviz Jacket at Sea Otter, after writing this review, that has the super reflective material on one side and is reversible. It has the bright yellow of the backpack on the reverse side, making it highly visible for daytime use!!]

Both of these pieces of kit are tip top of the ladder examples of what you should be looking for in high visibility gear.  They are not just very bright and highly reflective; they are damn well made… The pack cover material is such that I would guess years of life are to be had with it and the jacket is as good as anything coming from the top brands you’re used to.

Proviz is a clever company that will be seeing my dollars for motorcycle gear too.

Ah, Almost forgot the price. It seems they’re not the gougers they should be, as there are a LOT of jackets that are not this well-made but cost 2-3 times the $139.95 asking price. The Knightrider Pack cover is $37.99, but a whole small backpack can be had for $47 ($49 for a pack cover made from Reflect 360). This stuff is damn well done and the prices do not, erm, “reflect” the quality…

You can see more from them at: ProvizSports.com

You can buy Proviz gear at: https://www.cantitoeroad.com/

Note: if you have other experiences with gear, or something to add, drop us a line. We don’t claim to know everything (we just imply it at times). Give us a pat on the back if you like the reviews, or a slap in the head if you feel the need!
PezCycling News and the author ask that you contact the manufacturers before using any products you see here. Only the manufacturer can provide accurate and complete information on proper / safe use, handling, maintenance and or installation of products as well as any conditional information or product limitations.

Thet all Want to Climb The “Mur”