The latest bike on the test bench features multi-shaped chain and Seat stays, the latest in Carbo-Aliminum tube set, an all carbon fork that hovers around well under a pound a Carbon Seat Post and Head set. The only problem is it doesn’t cost enough…

Quattro Assi has been around for years and is the feature brand from Bill at W.M. Lewis Imports in Texas. The Frames are run by race teams from here to Belgium and the entire line (available at retailers like Bulteksports.com and Bicycle Showcase in Phoenix), much like the bike on test, is basically under priced! 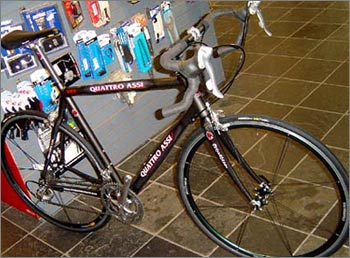 Today’s scooter came to us very well packed and all I knew about it was that it retailed for $1400 bucks (or @ half the price of the last few bikes we tested). That being the case, I was expecting something with your basic Aluminum frame and standard wishbone seat stays in Carbon.

What I didn’t expect was the super light Fork, Hidden Headset and Seat Post to also be in the box. And I sure as heck didn’t expect to see the tube set was latest creation of Carbon fiber center with Aluminum ends featured on bikes retailing for between 2 and 3 grand. 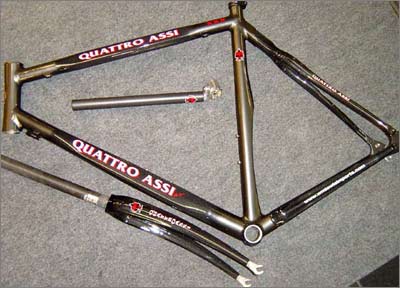 This bike has a lot going on so we will talk about the thing that is most important to me first… STIFFNESS.

The Down tube gets bigger as it goes south and winds up being pretty large where it counts and also features a little more heft (its actually shaped slightly larger) on the drive side (a benefit of the workability of the Carbon length). The entire seat tube is Metal and is also substantial at the bottom bracket and features a shape that provides stiffness and a some Aerodynamics for the rear wheel. The Chain stays are extremely similar to the Monoblock construction of tubing from Deda, meaning they are actually one big piece and, along with the bit of curve, this very large section where stays meet bottom bracket is a great combo of vibration damping and stiffness.

With all this Stiffness built in, the Carbon tubes and Seat stays had their work cut out for them and didn’t fail. This bike is pretty damn comfortable! The rear stays are feature curves and shapes in the right place to make them comfortable but don’t creat a sloppy back end under pressure. 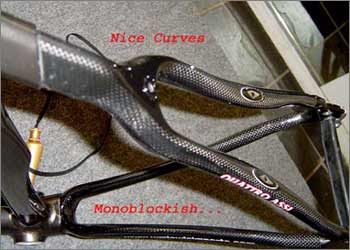 The last pieces of the puzzle for comfort were the Fork and Seat post. The Fork is a good piece of gear, Light and pretty comfortable, and the bike handled pretty well. This fork as a stand alone would be a 400 dollar piece of gear if it had someone else’s name on it. The only piece of the puzzle that was average was the seat post. The ride was plenty smooth, but the post is a little heavy. But then that’s nothing to gripe about, as you could take a small part of the money you save on a bike like this and buy yourself 4 or 5 carbon posts and still have a bunch left over compared to what a few other bikes would run you with This much technology.

Overall, this is a sweet bike. A good accelerator (even with a second test rider of 185 plus pounds on board) and still soaks up the chatter. I didn’t hot the scales with it, but I would imagine it could build out at somewhere close to 18 pounds in a large with Dura-Ace. The overall fit and finish was great for a ride at this cost, and on par with a few other bikes at twice the price. It’s drawback is in limited sizing, but with a good geometry spec, If you get close enough to make it work, It’s definitely worth a second look.

Get more info on Quattro Assi from Bill Lewis Imports .