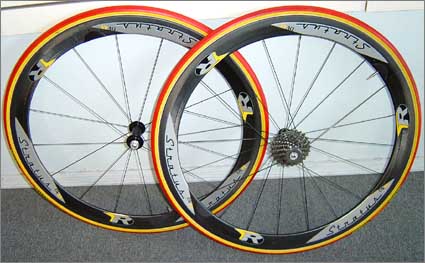 Reynolds sent us their standard (standard-ridiculously-nice super high end…) Stratus and Ciro wheels for test a while back. We loved em. We love the new Straus UL set for all the same reasons, minus 120 grams! That puts the set at 1130. As a point of reference or two, a set of Ksyrium SSC SL Tubulars weighs 1510 (clinchers 1530) with no Aero Profile. Should you go to their Aero (and very nice) Cosmic Carbon from Mavic, The Reynolds set will actually weigh 20 Grams More!!! But that is when you compare the Reynolds set (FRONT AND REAR) with just the Cosmic Carbon Rear…

So, we all know that you are cutting out by far the most critical weight on your bike when you cut wheel (rotating) weight. It’s been said a thousand times before, but nothing, no cranks, not bars, not frame weight, nothing changes the performance of your bike better than wheels. And there is no more critical weight on a wheel set than Rim and Rubber combined. That’s where all the weight came from with Reynolds UL sets. Right from the rim!

The Stratus UL are the result of much more control and tighter tolerance in an already costly and intensive manufacturing process. Reynolds basically takes material out of a few areas in the wheel structure and pays more attention to other areas that need to be stronger. The most important aspects of the reduction of the weight is that it is coming from the wheel and that it is still a strong enough structure so that Reynolds has confidence enough to stamp a very reputable name on them. That is important because the further the weight is from the center of a Wheel (the hub) the more work you have to do to move it (because it is traveling further…).

So as you look at wheel sets, overall weight is critical (and so is relative stiffness), but rim weight is especially so and Reynolds concentrated right where they needed to! Reynolds Stratus UL rim weighs 285 grams (the Ciro KOM is an Insane 220 grams). The Weight of a common clincher rim is @ 450 grams. And where clinchers are concerned you add tire, tube and rim strip together (which is also very important weight given it is even further away from the hub. A rubber set up for high-end clinchers is @ 320 grams (tire, tube and strip). A light weight rim will weigh 425 plus grams (and not have the aero profile of a stratus!). 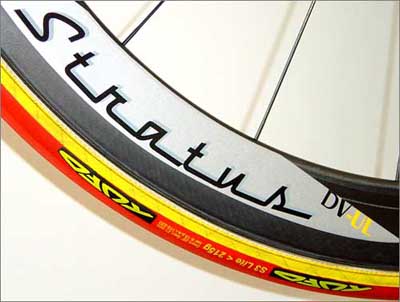 All together, the Rim and complete rubber (Tufo’s S-3 lite in this case) on a set of Stratus UL’s have a critical rotating mass of 500 grams per wheel. With a clincher, it would be in the area of 770 grams, for light weight higher end parts (yes you can make em lighter, so you don’t need to email me with several examples of paper thin tires, latex tubes and paper rim strips…). That’s a half pound of weight saved at the place on a wheel where it truly matters! 220 Grams right at the outside of EACH Wheel! (Note that with Mavics Ksyrium, you save a few grams because you don’t need a rim strip)

An additional advantage is that the tire pressures for some wheels can be limited to much less than a set of Tubulars (Mavic suggest a max of less that 150 PSI on their site under the SSC-SL’s). The Max tire pressue in a set of the Tufo’s is 220 PSI. There is a huge elimination of rolling resistance when tire pressures are 30 – 50 percent higher! Of course the trade off is in traction and ride comfort with a harder tire. 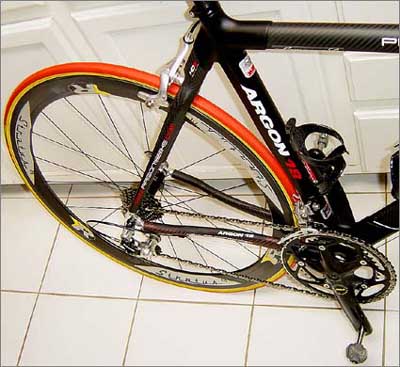 So how do they ride?

Better acceleration than the standard Stratus, while maintaining most of the lateral stiffness. They also seem to ride a little more comfortably. That might be due to a little lighter spoke tension and a little less material in the side walls. Carbon does soak up vibration, and passing it through a little more forgiving wheel section and a little less spoke tension should do the trick. This set also run Sapim Spokes, where the last set was DT, but the effect here on comfort would be minimal.

The same super slick look as their Standard Stratus is held here as well. The Pre Preg carbon finish (no checkerboard matte) looks positively evil. Match that with a pretty nice logo and decals and you have a set that makes people look closer. One word to the wise for the guys at Reynolds… QR’s. A nice trick set should come with the wheels. 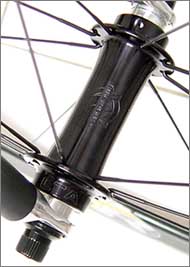 White industries hubs are again in use and they do the job. The nipples are buried in the wheel to decrease the hole size in the rim (for strength) and to reduce wind drag. That means pulling the tires off to true the wheel (which bugs me). But, note that I have not had to true any of the Reynolds wheels that have come through, so I don’t know why I am bitching…

These are top flight wheels built to make a difference in your performance and they do just that (unless you are already on a light weight aero section wheel set…). At $1,799 these are obviously high end equipment on par with several high dollar Frames and group sets available. Given direct performance benefit found in wheels, if I had to spend the money on something high end, I would look at spending it on the wheels first and the frame and group set second or third. Maybe most folks have “High end frame” on the brain, but a ride on a set like this will get your priorities straight in a hurry!

Check em out at www.reynoldscomposites.com.

Here’s All The Riders For La Vuelta