If someone had asked me last week, “Is it worth driving to Boulder for the RMBS, or should I just ride on this beautiful autumn day?” I would have quickly replied- “Bikes are for riding, not looking at. Get out there and enjoy the ride.”

In the first few minutes of my trip around the Glenn Miller Ballroom on the CU-Boulder campus, I realized how wrong my reply would have been. If they had listened to my advice, they would have missed the rare opportunity to meet the faces and personalities behind the beautiful works of art we call bicycles.

The inaugural show, put on by Miles Ahead Events, brought 19 frame builders and 8 accessory manufacturers to the cycling hub of the Rockies on the same days that two UCI Cyclocross events were held nearby. The show advertised the opportunity for cycling enthusiasts and cyclocross racers to actually lay their eyes and hands on the coolest new gear.

As testimony to the success of this concept, Matt from Moots raced the Boulder Cup that morning and showed off the redesigned Psychlo -X cross bike in the afternoon. 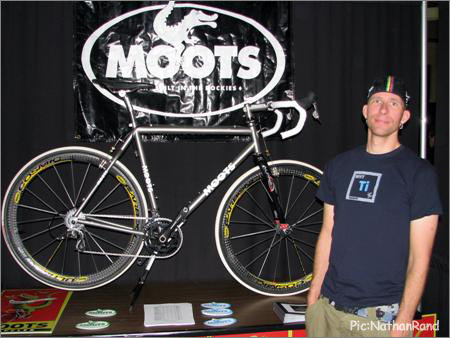 Moots also brought the Co-Mooter, a sweet, but pricey option for those of you who are selling the SUV but still want a classy ride to work. 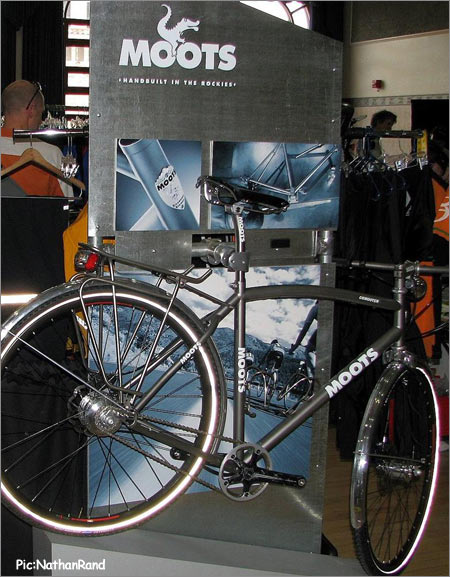 As advertised, the newest gear certainly was a draw to the show, but for me, it wasn’t the highlight. The steady, but not choking (read: Interbike) attendance gave visitors time to actually talk to the various frame builders. The personal attention that the exhibitors gave to the attendees lended a unique charm to the event. To cap off the event two days before our presidential election, attendees cast ballots on the Best Bicycle and Best Accessory awards.

Ben Farver of Argonaut Cycles, not only exuded an approachable confidence which belied his youth, but he also took the show, winning two awards. It was obvious from the moment he began speaking that Ben was passionate about building bikes which reflect the owner’s needs and style. His goal is to incorporate customer input into the building process so that the cyclist has a greater sense of ownership in the finished product. His lugged and fillet brazed works clearly demonstrate that he routinely accomplishes this goal. 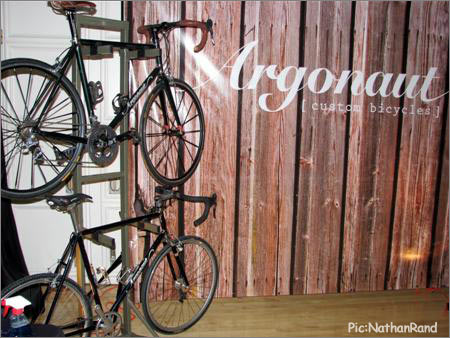 Argonaut won Best in Show for their luscious track bike. The shine coming off this beauty was such that if Morrissey had fixed fetish, he could coif his pompadour in the lugs. 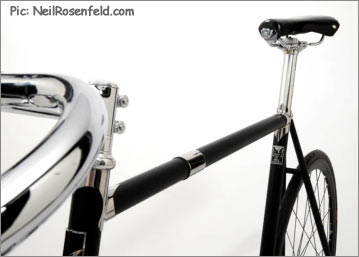 Argonaut also won the Builder’s Choice award for its single speed cyclocross bike. This award meant a lot to Ben since only exhibiting framebuilders were eligible to vote. 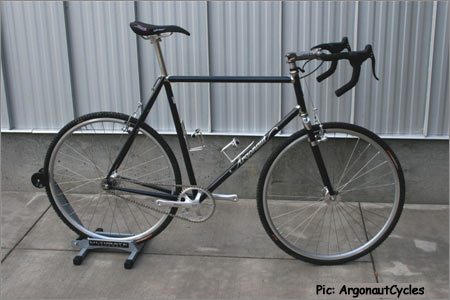 I can only hope that some of the local single speed guys get that bike and end up staring at its beauty instead of catching me at the tail end of the Cat 3 races. Because my current focus is traditional cyclocross, the show stopper for me was the Temple Cycles aptly named, Het Beast- 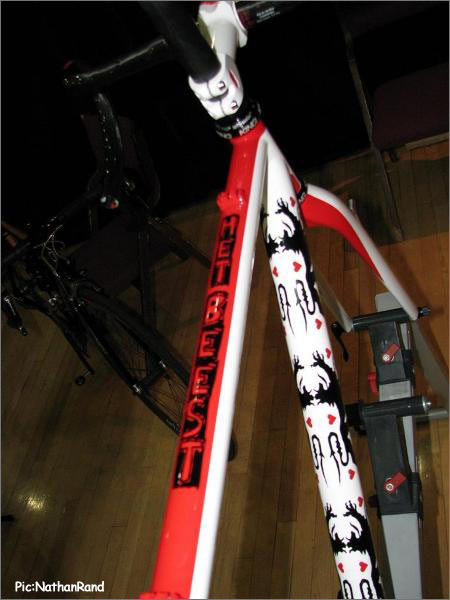 Lance Johnson, founder of Hudz and Applied Cycling Labs, designed this custom monster out of no less than four different tubesets. 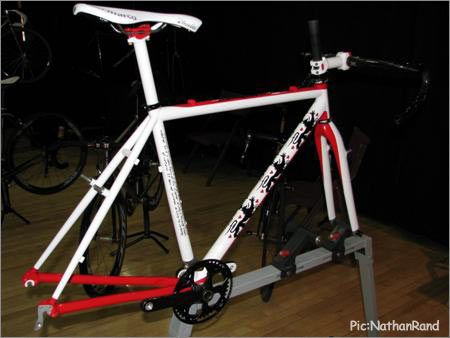 The Johnson family was in full force at the show with Carol running the show, Lance exhibiting his Temple line and brother Jared working the Hudz booth. The story of how Carlos Sastre and Andy Schleck got their colored Hudz in time for the final Tour stage this year was worth the $5 price of admission alone. 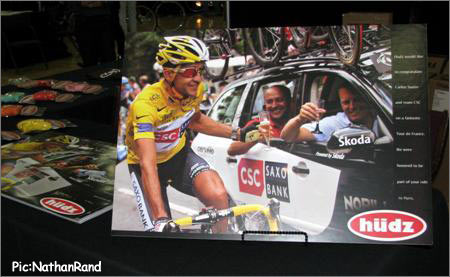 The story goes like this: Apparently Lance from Hudz was working with a CSC mechanic and promised to get him Hudz for Carlos and Andy should they take the jerseys to Paris. The day before the final TT, Lance tried to send a Fed Ex to France with enough yellow Hudz for the whole team and white for Andy.

He received a tracking notification of a hold on the packeage and called Fed Ex in the US to sort it out. They needed more specific delivery info. Lance told them to just put “Team CSC hotel, Tour de France” on the package and it would be delivered. That wasn’t good enough for Fed Ex.

Word of this somehow got to the president of the French courier Co. and he personally got the package, drove it himself to the CSC hotel and delivered it to the mechanic – just before the final day’s ride into Paris. 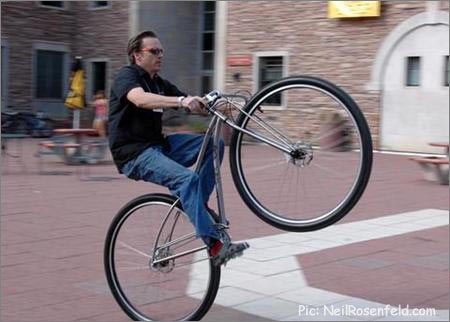 Black Sheep works strictly in titanium and with James’ background in the ultra-anal tolerances of the aerospace industry, that is a great thing for his customers. The curves Black Sheep puts on their forks are designed to give less brake chatter yet still offer up some vertical compliance. 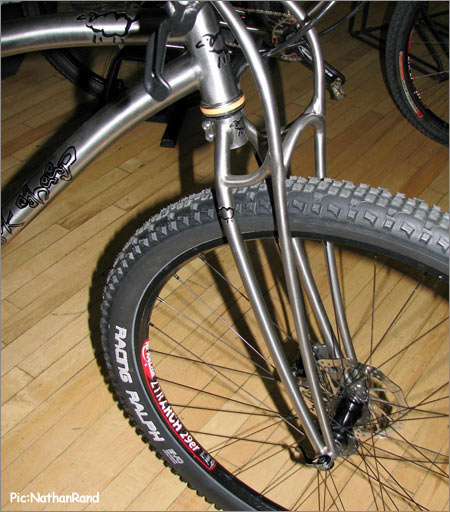 Another highlight for me was speaking to Aaron of Courage Bicycle. His SCX cross bike was painted in a deceptively dark blue that hid the curvy stays and subtle nuances of the braze work. These particular Edge Composites wheels were heading off after the show to race the European cross circuit. 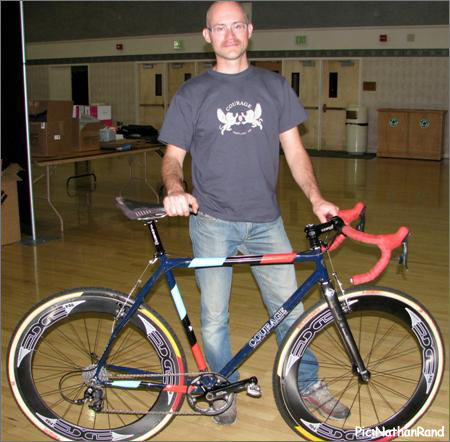 Without a doubt, the brightest bike of the show was the “princess bike” by Courage. With white fenders, paint, tape and tires, the owner had better invest in some good cleaning gear. 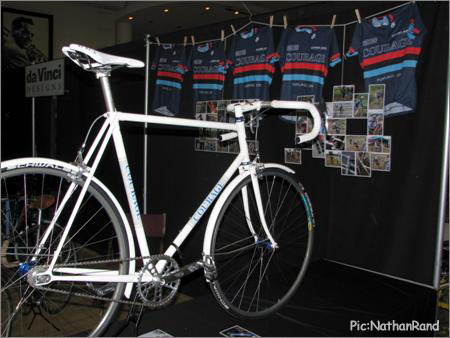 On the components front, it was invaluable speaking to Jake and Jim from Edge Compositesof Utah when compared to reading the reviews of their products on line. Edge brought out new road and mountain bike bars and tons of fork options. 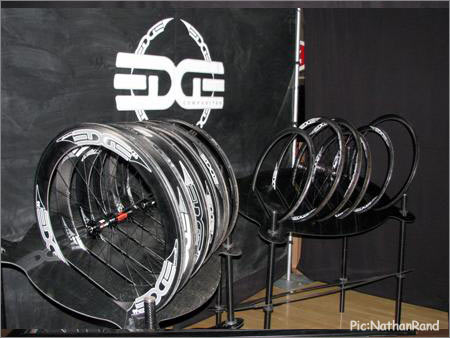 In addition to their custom line, Colorado custom shoe manufacturer D2 Shoes touted the virtues of their new stock shoes, component orthotic system and cleat placement tools. Don and Dan took loads of time to walk visitors through what are the 10 Commandments of Bike Fit:
1. Feet
2. Ass
3. Hands
(Actually there are only three commandments that came down from Alpe d’Huez, but whose counting?)
Although they stated it more diplomatically, feet are the foundation. Bike fitters across the world can give their customers a more solid base with these tools which can be used with any cycling shoe. 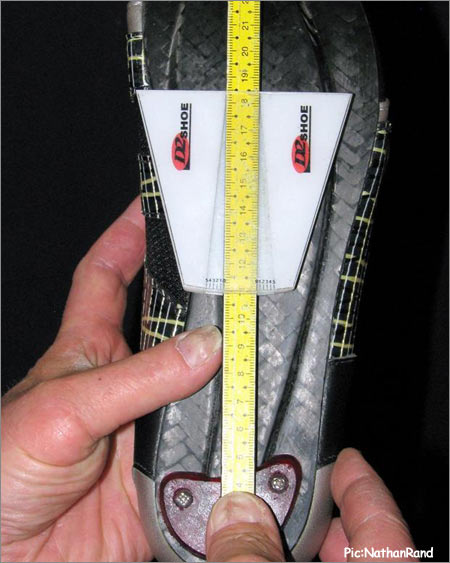 Another Colorado company at the show was King Cage from Durango. In less than a minute, Ron could take a straight piece of titanium tubing and make all the bends necessary for a 28 gram water bottle cage. Ron made tons of cages over the two day show- maybe that’s why he won the Rider’s Choice for Best Component award. 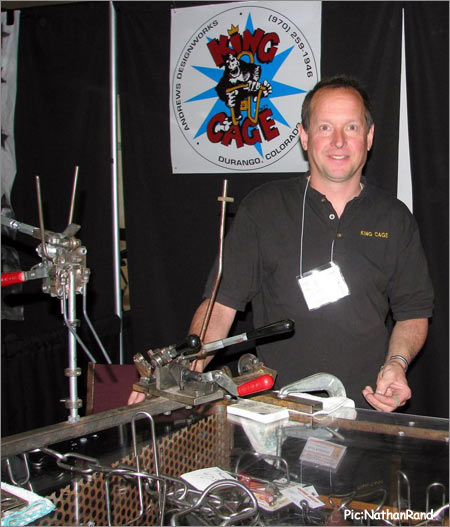 Civilian Bicycle Co.of Idaho came out in force with a beautiful townie that was a whisker away from winning rider’s choice for best bicycle. 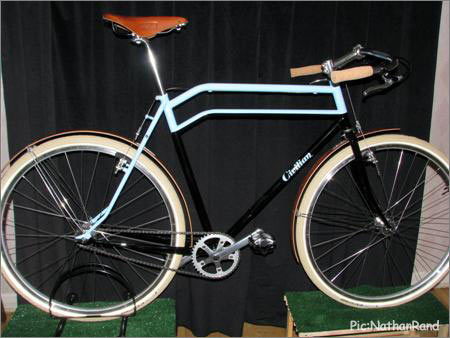 Fixed fans would have appreciated speaking to Ground Up Designs’ crew. Eric Baar said that each tube on this beauty was fully polished on the lathe prior to welding. That’s like painting a bike before welding it for those who are manufacturingly- challenged. 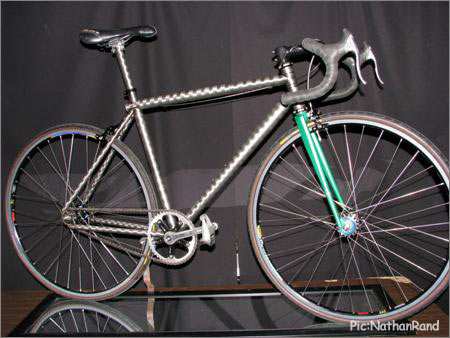 There were many other memorable bikes and great conversations from the Rocky Mountain Bicycle Show. I am eagerly looking forward to next year’s event. To see a gallery of more photographs, visit the show website: RMBShow.com.

Spending time with the exhibitors on this beautiful autumn day in Boulder had inspired me to look at my bike differently and indeed, enjoy the ride. 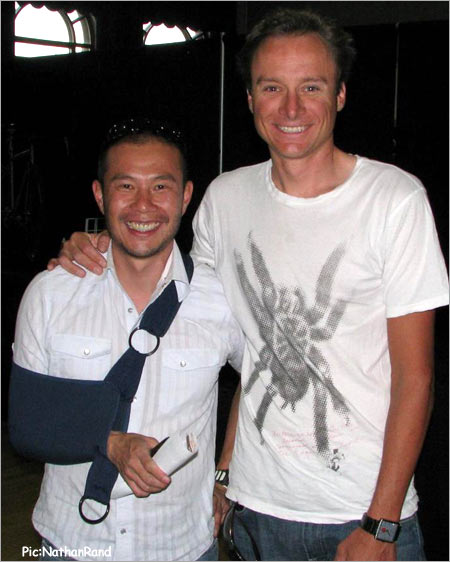