At the Saunier Duval-Prodir team training camp in January, I had a chance to ride their new Scott USA CR-1 team bikes. We tested last year’s model here on PEZ, so I was keen to see what changes had been made for ’05. And did I mention I was riding the official team bike…?!!!

Thanks to Adrian Montgomery, my hook up from Scott, and David Fernandez, Saunier team mechanic, it was a very cool experience.

When I arrived at the hotel on Friday evening, the Saunier truck was parked out front and the crew of mechanics were busy putting bikes together. Adrian told me each rider gets two race bikes, one training bike, and a TT machine. I was “given” a small size frame that belonged to Oliver Zaugg. Since the bike fit great, I was really stoked to take it for a “good” ride.

Team Spec
These are the same bikes you can buy at your local dealer, with a few diffs in team spec. The frame is the same – exactly the same one you can buy, ride, and covet. The big diff, however between the showroom stock bike and the team ride is the gruppo. Campagnolo sponsors the Saunier Duval-Prodir team, and so adorn the team bikes with full Record gruppo. The wheels are Fulcrum (also made by Campy), while the bars, stem and seatpost are homegrown by Ritchey (same as stock bike)

Adrian – the man from Scott, and all around “Mr. Rourke”. He made Nate’s training camp fantasies come true.

Let’s Go Riding
The coast of Spain in the area of Estepona is flat for about 5km tops as you go inland from the beach, and from there it gets quite hilly. Adrian and I rode about 4 hours, of which at least 2.5 where mostly up hill. We popped into a small town on the way and rode up this super steep cobble stone street to the ruins of an old castle. I rode the steepest section seated so not to spin the rear wheel and had no problem whatsoever. From there, we kept climbing to some little town in the hills. I was really impressed with how well the bike climbed, especially since that is my favorite thing to do on a road bike.

Our destination – look waaaayy up!

During this part of the ride, I kept thinking about my initial impressions of the bike. For me, it was amazing. I don’t mean to gush or anything, but it seemed as if the frame wasn’t even there. It was as if I floating along on a seat, handle bars, and pedals. I don’t know any other way to describe it… amazing.

So it was obvious that the frame is absorbent, but what about rigidity when sprinting or standing up climbing? The CR-1 passed my test here too. I stomped on the pedals a few times and in a matter of seconds, I was opening up huge gaps over Adrian. (Okay – so he’s more a rolleur to my grimpeur, but a gap’s a gap…) I knew the frame was rigid, but Scott really has done some good stuff with their carbon design – . When I got out of the saddle and started climbing, I was impressed by how connected to the drivetrain this bike made me feel.

The maestro of mechanics – David Fernandez.

What Goes Up…
After a quick stop, it was time to head back to the hotel. This is where the real fun began. Normally I don’t really enjoy long twisty descents, but I had a complete blast bombing downhill with a lot of speed and confidence. As I said to Adrian on the ride, the bike seems to instill confidence when descending. This is in large part due to its fairly standard geometry and the combination of super lightweight that allows you to pretty much put this bike anywhere you want it.

That was enough to close the deal for me. A bike that is super light, climbs well, and descends well doesn’t come along every day. A lot of bikes that are light and climb well turn out to be very nervous when descending. When racing, that’s a huge disadvantage and when you’re on you weekend ride with you friends it can be dangerous. 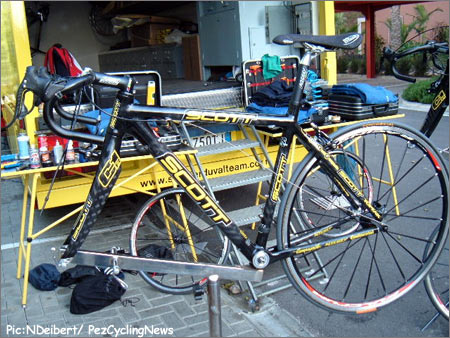 Ok, so obviously I was impressed with the ride of the CR-1, but what about the guys on the team. Everyone I asked responded positively about the bike. Andrea Tafi said he was extremely pleased with the ride. He mentioned that in his last team, he was so unhappy with the bike that he actually used another bike painted over instead of the sponsor’s bike. The only complaint that I heard from one of the riders was that while the bike does great in tight twisty descents, he claimed that in wide sweeping downhill corners the bike has a tendency to want to drift out.

It’s In The Frame
Now, let’s talk about the bike. Is this bike really any different from other carbon fiber models out there? Yes. Why? Well, instead of making a monocoque frame, which often times can be heavier, or a lugged frame, which can suffer from additional weight and less comfort due to overlapping carbon joints, Scott has developed a new technology. Their proprietary CR1 process allows them to miter each custom tube and then “carbon-weld” them together giving the frame the nice smooth appearance of a monocoque frame while being lighter (because it requires less material to make), but as strong as most riders need.

To quote our own Tech-editor Charles Manantan – who said it best in his review of the 2004 Scott CR1 Team bike: Scott also join the tubes a little different that most folks. They precision CNC cut the tubes so that they fit together extremely well. That helps in the joining process Scott call “Carbon Welding”. As the tubes fit very tightly together, Scott need to use far less material at the joint (where a lot of the weight savings happens). Buy using small amounts of fiber in multiple directions at the joint, Scott create a very strong but almost invisible “micro-lug” (my word not Scott’s). What looks like a monocoque frame is actually a tube frame done very well. The build process also allows Scott to manufacture 6 sizes in the range, in a shape and style that are usually only manufactured in 4 sizes.

The only thing that I was a little leery of at first was the non-replaceable derailleur hanger. However, after asking why they chose to do it that way, it made good sense. The drop out and hanger are much stiffer this way and therefore the shifting is more precise. It’s a three dimensional structure machined from one piece of aluminum designed to strengthen the drop out and hanger.

In the end, how did I feel about this bike? I loved it and would have liked to ride it some more, but unfortunately I was only as the Saunier training camp for a couple days. However, what I found in that short amount of time was a very solid bike that is extremely comfortable and very fast. Two things I look for in a race bike. If I had to describe this bike in one word, I’d call it “stealth” – you hardly know you’re riding it.