It’s said that a good pair of shoes is the most important piece of cycling equipment on your body. After all they transfer power to that other important piece of equipment (your bike…). For years French made Carnac shoes have consistently been mentioned amongst the tops in the business so I was as giddy as sorority girl with daddy’s credit card when I found out Sinclair Imports was sending a new set of M5’s!. 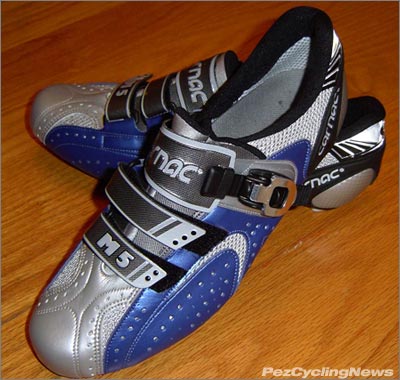 Imagine yourself in a pair of these new M5’s from Carnac…. Yes yes.

It’s ALIVE……a case study in funky feet
Before I get to the nitty gritty of how they feel let me disclose that I have some seriously jacked-up feet. I won’t disgust you with all the gory details of my “Franken-Stompers” but my high arches, large foot size discrepancy (and width) coupled with a leg length issue means buying or changing shoes is a major trial and error session. When it comes to shoes I’m not always easy to please…..

Do They Have Soul?
I’ll be the first to admit that I am shallower than a backwoods gene pool when it comes to the appearance of my shoes, so I was pretty happy when I opened up the M5 shoe box. Since the previous Carnac editions didn’t get me jazzed in the appearance department I have to say my test shoes where a big upgrade in the style points category. They’re a great looking pair of shoes that could please even the vainest cyclist.

We got the standard M5 with the composite sole, rather than the flashy Alu-carbon weave that comes with the M5 Carbon. Gone on both models is the need for adapter plates, which is a welcome change for bike shop employees (me) and consumers alike. Though I have yet to see the full carbon fiber sole I can say that I hope it is thinner at the cleat/shoe interface than the carbon graphite soled model I tested. Maybe the thickness is due to the fore and aft venting familiar with Carnac shoes starting several years back. That said, the stiffness is very good on Carnac’s, and if that’s what this thickness gives you, so be it.

Both M5 models feature a completely redesigned upper featuring a synthetic leather called Giardhini Micro Golf. That replaces the Kangaroo leather of the past. The low weight of synthetic uppers is nice, but Kangaroo leather is incredibly tough and meant that you had no need for Hill Billy Chrome (duct tape). Giardhini is supposed to weather much better than leather though, so that’s a plus. Note too that the new stuff does not stretch like leather, meaning make sure they fit the first time… 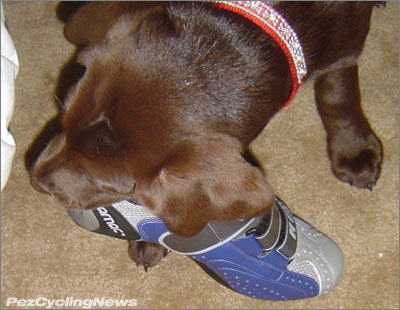 ”London” the test dog gives the M5s the once over.

Keeping your foot snug is the job of three straps: two Velcro and one using the all new replaceable SMC2 ratcheting buckle. At the end of the shoe is a semi rigid, molded heel cup. There is also a thoughtful no-slip, replaceable heel pad on the bottom of each shoe.

Inside the shoe Carnac designers also went hard to work and the M5’s have an airy, low-friction mesh without any annoying seams or folds of fabric to bother when synched down. So far, so good.

Enough Talk – Let’s Ride
With my cleats (Speedplays) mounted it was out on the road for the real test.
Out of the starting gate the first thing I noticed was how comfy the forefoot of the upper really is while pedaling. My feet and primarily my toes were free to roam as the miles ticked away—a feature that I was gracious for to help keep unwanted foot numbness at bay on my longer rides. 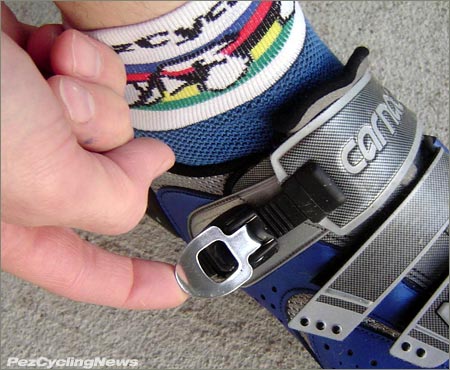 Look Ma! I can open this SMC2 buckle with one finger!

The more I pedaled the more I also noticed how truly supple the upper really was and how it allowed the various physical structures of my foot to move throughout the forces exerted on them during my pedal stroke. I’m no podiatrist so the best way I can explain it is to think of the way a nice set of bibs move with you (i.e. don’t bind) as you turn the pedals. The shoe uppers spread the load very well, with no hot spots, while still feeling solid under my foot. Climbing, cruising, or hammering in the drops, the sole was plenty stiff for all the wattage my 160 pound body could produce. 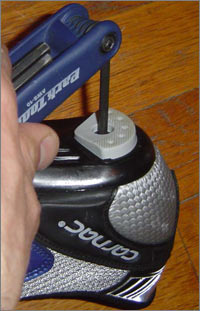 Aside from the replaceable heel skid plates coming loose I had no issues with the shoes. A simple turn of a 4mm allen key snugged down the heel plates and that was that. One noteworthy aspect is the fact that Carnac replaced the more aggressive insole of their past shoes with a flatter, less substantial one in the M5’s. Since I run off the shelf orthotics it was irrelevant to me, but for Carnac’s established customer base it may come as a surprise.

The ratchet mechanism made for easy “on the fly adjustments” while riding and getting out of the shoes in post-ride caloric debt didn’t put me in a Jeroen Blijlevens punch fest kinda’ mood. If I were a part of their internal test program I would personally chime in that I would like a more robust heel cup as I felt at times they flexed a bit and allowed my foot to move in unwanted ways.

The $279.99 price tag is a little higher than other shoes we’ve seen that lack a carbon weave sole. And these are 305 Grams versus 285 on the M5 carbon, but you do get the same nice uppers as the more expensive kicks, so it’s all relative. 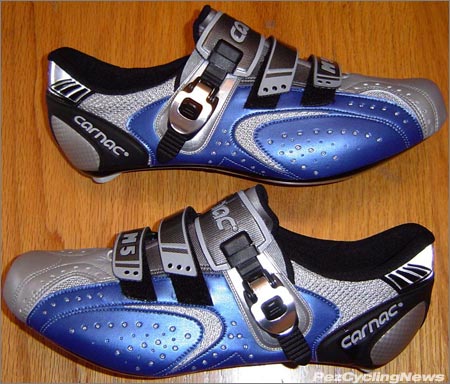 So What
Overall Carnac has created an uber-comfy platform that they can be proud of. The house-slipper-plush feel of the new M5 far outweighed the minor nags I encountered (and to be perfectly succinct the nags mostly had to do with my personal quirks). Aside from the easily fixed heel skid plate issue the shoes allowed me to tick away the miles and not think about my feet or, more importantly, remember how miserable they can feel when things go wrong. I’d give these shoes an especially emphatic nod for those of you that need/prefer a little more forefoot room, Carnac are still a fairly roomy front with the M5 and a good choice for folks needing it.

Check ‘em out online at www.sinclairimports.com for more info.