Not your mama’s wheels… It is with great regret that we publish the story on American Classics 38mm Carbon wheels. It means that I have run out of reasons to tell the folks at American Classic that they require “Further evaluation” and also puts me one step closer to having to give them up. 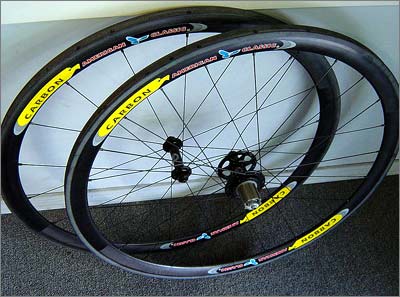 Our first test of wheel stock from American Classic was with their 420’s and that set the bar pretty high, as they knocked over a few of the favorites in short order. The 38mm Carbons had a lot to live up to, and did pretty well.

To get the weight BS out of the way, these kicked in almost dead on 1100 Grams. To put that into perspective, the competitive Campy Hyperons (costing 70% more) come in a quarter pound heavier and it’s closest counterpart from Zipp come in just a few grams +. Any of these is sickeningly light though…

The wheels themselves have a mid depth (also available in deep section…) of 38mm and come with a choice of spoke number, spoke color, nipple color (brass is suggested) and hub color (options not found by many competitors…). They also feature the standard Am Classic Micro hubs which have performed very well in long term test. The rim is top shelf and has a great advantage of a treated breaking surface that requires no special pads! 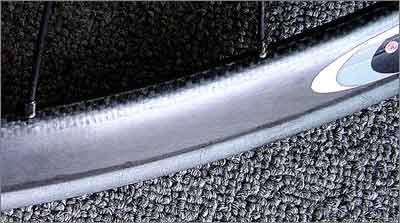 One of the best features from most of the stuff designed by Bill Shook is that form follows function (meaning a bunch of bone head marketing types don’t come up with a bullshit picture of something “cool looking” that engineers then have to build…) and the same goes with the Carbons. Standard spoke pattern rather than paired. Standard spokes and nipples (found at any descent bike shop), with easy access (not buried in the rim) that doesn’t require you to pull off the tire to true the wheel. And sealed-bearing hubs. All this probably makes hard core techno-weenies yawn in boredom. The point I’m trying to make though is, when something goes wrong, you or your mechanic will also yawn because fixing / trueing / maintaining wheels isn’t something you should consider bad. And should you race flat, swapping from these to something else is simple, as they require no special pads and have spacing that is industry standard. Oh, they also come ready for Campy or Shimano.

So, we glued on a set of Conti’s top of the line GP tubulars on (an exercise in pain as they don’t come cheap) pumped 160 pounds (they go up to 170) and hit the road…

Right off the bat, one of the first things you notice when rolling down the road with 50% more tire pressure is that the rolling resistance amounts to almost nothing. For those of you who scoff at anyone on a set of tubulars because of their inability to easily change a flat, remember that it’s pretty simple to roll a spare tubular on (and ride carefully home as it’s not glued) and also note that a very good set of tubulars are probably far more durable and built with more protection than their race level Clincher counterparts.

The one thing that sticks out on this set of wheels is the acceleration. Going from even the lightest Clincher to a wheel set that is a full pound lighter is as dramatic a difference as you can make on a Bike. No bars, No Cranks, nothing will give you as noticeable a change in quickness as a set of super light high pressure wheels. And if you happen to be accelerating on a climb, you’ll probably eventually settle into a rhythm. Once there, you’ll find yourself using a bit less energy over the long haul in order to keep the same speed while on a set of light weights. It’s also nice to have a bit of an aero profile on flat terrain, and these wheels hold their speed pretty well (although not as well as deeper 45 -58 mm wheels do.

You may argue that “the pro’s use clinchers now”. Well, consider that bike tires have 1/100th the material yet cost as much a car tire (producing astronomical profit margin) and that clinchers are way easier to manufacture, so the industry wants to go that way. Couple this with the fact that those guys are paid to ride what is requested by the sponsors and you might come to a different opinion. If you don’t come to that opinion, take a look at what the cream of the crop are on in the mountain stages at the tour (Lance, Jan, Jaja et al… all on carbon tubulars) and for toughness, look at what the huge majority of guys ride at Roubaix (Museeuw and the gang on 25+mm tubes with top secret tire pressures…). I run clinchers, don’t get me wrong. But I have no fear of tubulars.

The point here is to get the best of all worlds and a set of Carbon 38’s is pretty much the best you can do (weather they be from Am Class or others). The combination of a deeper section and super light weight give you a great combination of good stiffness, unreal acceleration, high pressure low rolling resistance that, when combined, put a lot of power to the road. Add the ease of maintenance that Come with American Classics products and the concentration on ease of use over hype and you have a great set of hoops. Factor in the customizable spoke, color and cassette compatibility and no brake pad req’s with the cost, and you run out of reasons not to look at the American Classics!

See more at the American Classicwebsite.