When asked on an Australian small business podcast to describe the Sufferfest, founder David McQuillen remarked: “It’s a community of masochists who love nothing more than punishing themselves completely in their own basements.” The host of the program hastened to point out that this was not really promotion of a new trend in S&M but was a remarkably successful enterprise dedicated to cycling. 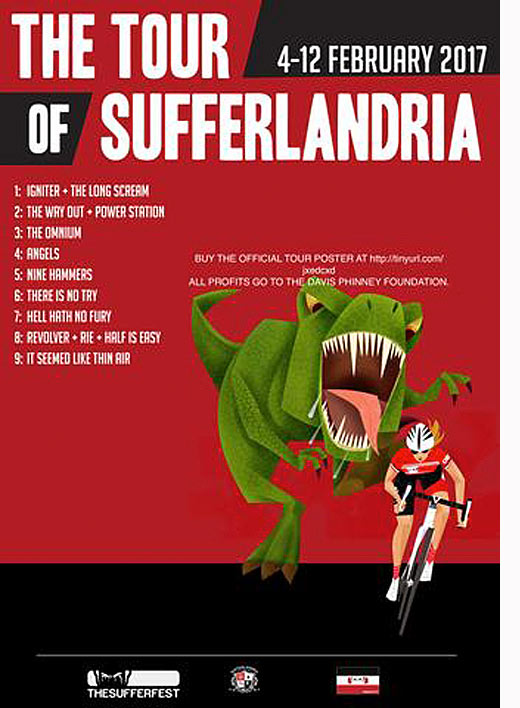 David McQuillen, then based in Switzerland, was reaching Terminal Trainer Boredom Syndrome (TTBS) as he was limited to the turbo trainer all winter. Wanting something more entertaining and not finding it in the market then, he edited a series of race videos, added music he liked and voila! He put up his first efforts on Youtube and was horrified at the extremely positive reaction he got since he had not purchased rights to the footage. Pulling his videos, he then received anguished e-mails from people who wanted the training videos back. As a banker with an uncharacteristic amount of imagination, he sensed a business opportunity and proceeded to do things the right way. He obtained video footage through licenses with the UCI, ASO, Cyclefilm and other sources and began to edit. In 2009, with music he personally selected, the first Sufferfest videos became available as downloads. Reasonably priced, they offered a unique blend of serious training, entertaining story lines and idiosyncratic music.

As time passed, the Sufferfest grew and grew. Its Facebook page has 125,000 followers; it has a range of clothing on offer; it offers an annual training camp; it runs the Tour of Sufferlandria each year, a 9 day event billed as the world’s toughest stage race of any imaginary country. This year’s ToS raised some $145,000 for the Davis Phinney Foundation and gave out a lot of cool prizes. Sufferlandria has a sub-cult, the Knights and Dames of Sufferlandria, who have ridden along to 10 of the videos in a single day, as well as a rival nation, Couchlandria, where the residents feast on donuts while slouching on double-wide sofas. 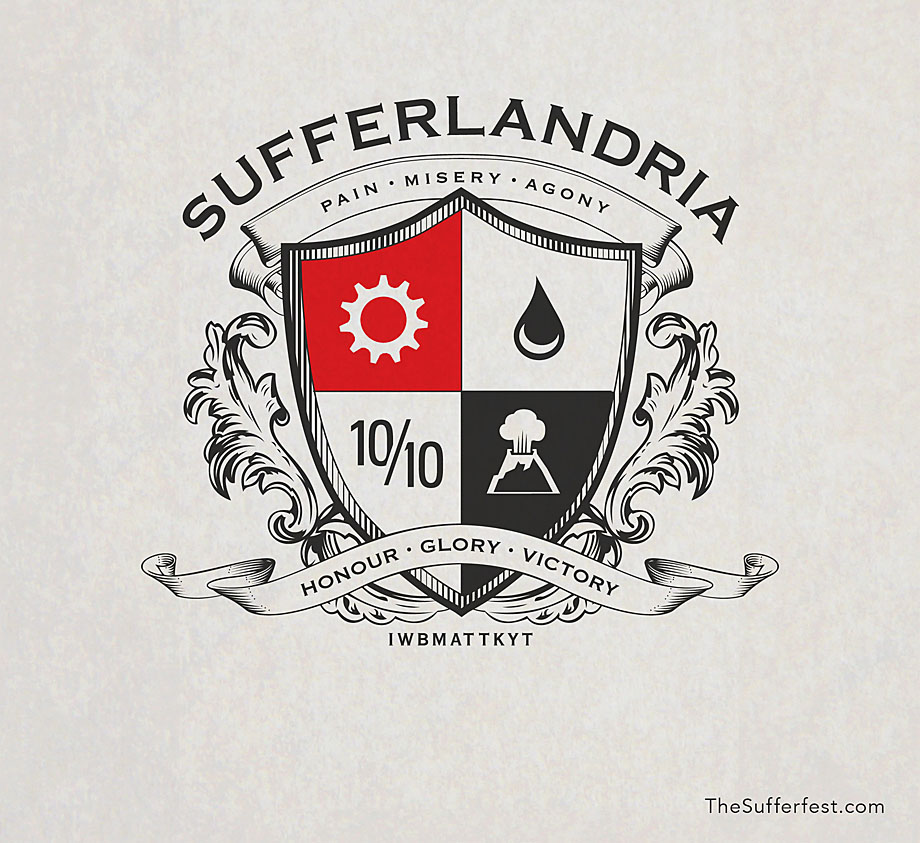 Sufferlandria has an excellent rockin’ national anthem, whose chorus is the motto “I will beat my ass today to kick yours tomorrow,” or IWBMATTKYT as it is known to the cognoscenti. There are minions to help and/or hinder you and flogging stations if you have not suffered sufficiently and lava snow to ride through on Mt. Sufferlandira. There is a fair amount of ridicule and disturbing threats by Directeur Sportif and Poet Laureate Grunter von Agony. There are glasses of cham-pain at the Nine Hammers Tavern in the Sufferlandrian capital city of Agonia. And there are people who actually get tattoos of the Sufferlandrian flag, with its bleeding eyes logo and black-white-red stripes, with black representing suffering, white more suffering, and red, well, suffering. And you can also enjoy the podcast, “Everybody Hurts.” 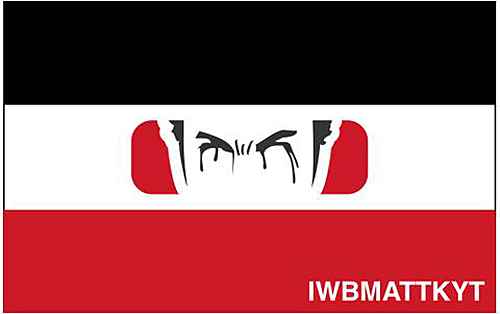 This small business has grown to the point where Mr. McQuillen could unleash minions with technical expertise to develop a Sufferfest Training Centre App, which was released in its first version last year and now can use Windows, OS X Mac, and iPhone/iPad platforms. A few of the original videos are still available as downloads but will be supplanted by app versions only in the future. This is a trend across the Internet as content producers strive to protect their intellectual property with a monthly subscription arrangement. In the case of the Sufferfest, this fee is US$10/month. It can be dropped at anytime at no charge, which is usually the case with its competitors as well. So, what do you get for your money?

First of all, a disclaimer. I am not a very technically-oriented person so the description that follows reflects that. I cannot go into the nuances of the system but rather approach it a general user looking for a good training experience. I do not have a wide-screen plasma monitor, an expensive turbo trainer or anything special. I have a laptop with a Garmin USB ANT+ stick (a different one is sold by Garmin now) to pick up the signal from my heart rate monitor, a Garmin GSC10 wireless speed/cadence sensor (also apparently discontinued now) .and a very heavy and highly recommended Kurt Kinetic Road Machine trainer (now they are a different colour). 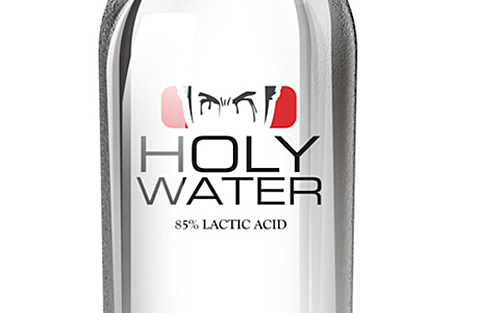 The Sufferfest Training Centre App provides a very attractive “frame” around the chosen video; subscribers have access to the entire library of Sufferfest videos, currently 39 with more to come, for cyclists, triathletes and runners. The frame picks up the signals from the bike and rider and provides a readout of wattage, heart rate and cadence, besides the recommended levels you should aim at. If your numbers are too low, the area around them goes blue (for relaxed?) while too high and they go red. They are clearly displayed, although I have to admit I sometimes find the target numbers a bit hard to read on the laptop, which is position several feet away from my handlebars. 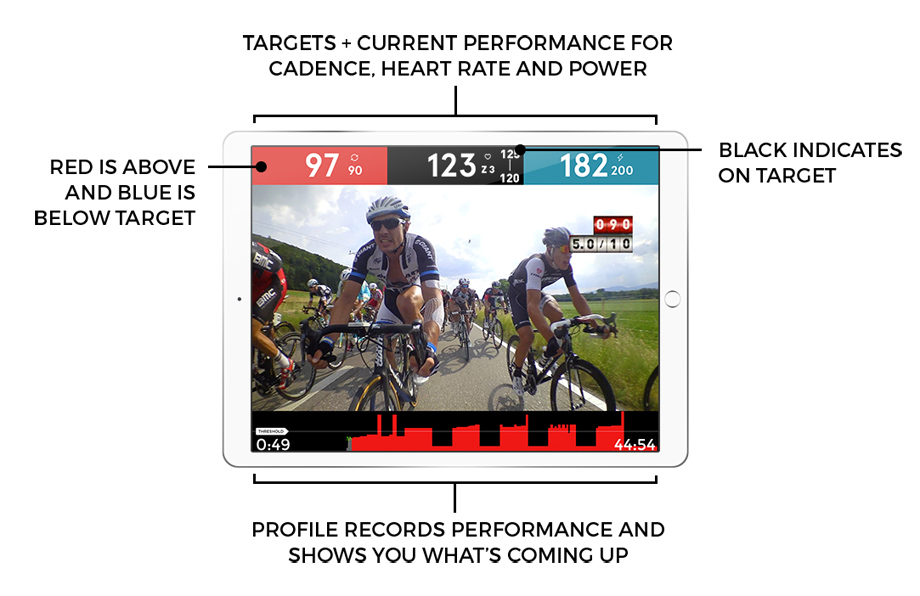 If you have a more elaborate set-up, the app will accommodate reading from a power meter, as well as getting the most from the new generation of smart trainers as the app will increase or decrease resistance as you pedal. For my more basic arrangement, the app provides a reading of “Virtual Power,” based on the known powerband of my Road Machine. I am not certain how precise this is but my concern is that it be consistent, even though it would be affected by tire pressure and how tight the tire is against the roller. There was no magic involved in having the app read my devices so set-up is a snap. 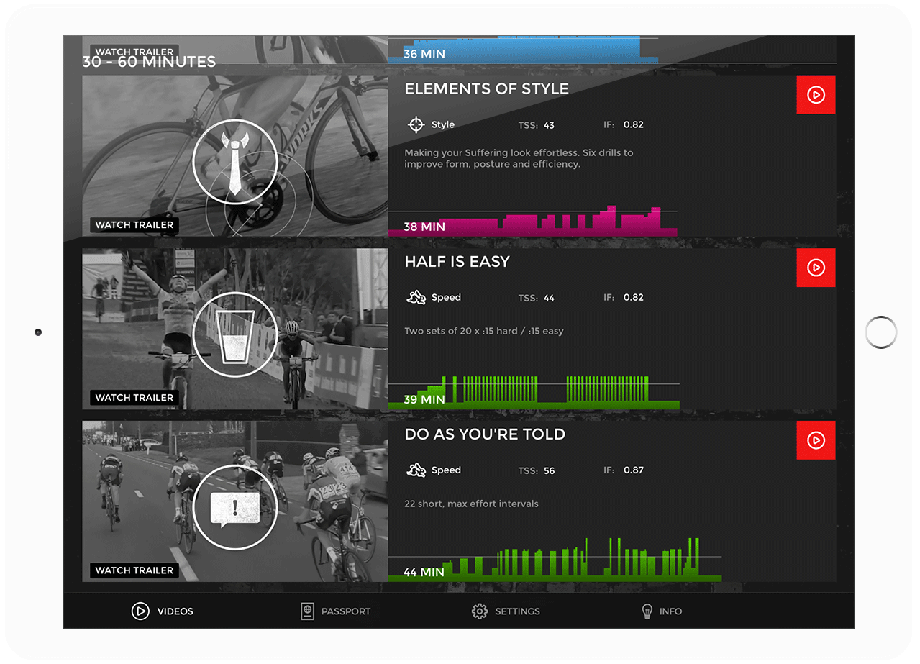 You choose your video from a very clear menu and then can either use it via streaming or download it and save it to be used with the app where you have no Internet connection. The Sufferfest videos have the same information panels as they did previously as downloads, showing Rate of Perceived Exertion (the 1-10 scale), recommended cadence and time in an interval. There is a clear graph at the bottom of the video showing the workout progression and indications for time underway and time remaining. The presentation has a very clean look and in no way detracts from the business of training or crushing Jens Voigt in “the Rookie.” 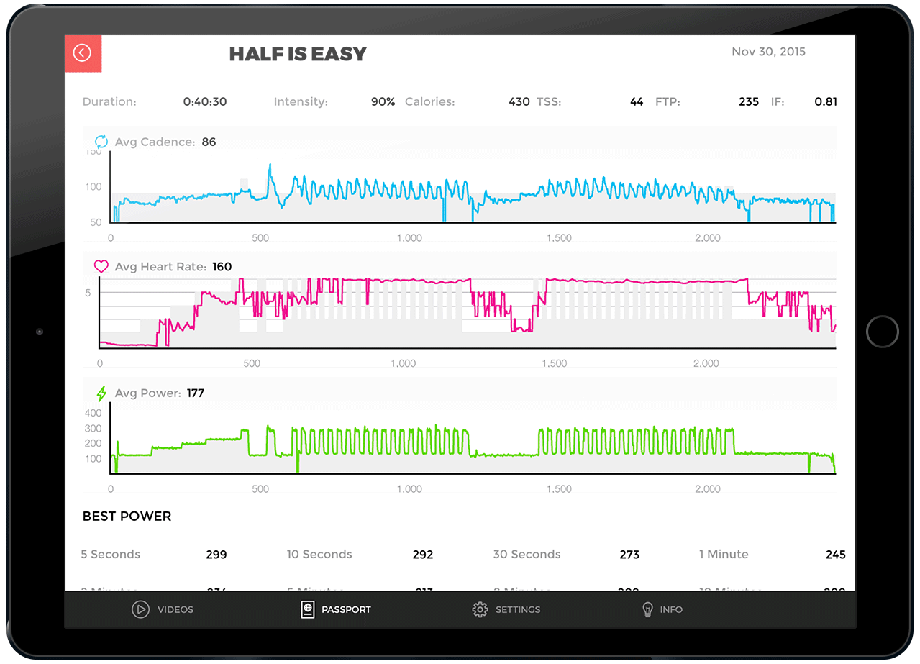 Once your ride is over, the data is saved for future reference and can also be forwarded to Strava or TrainingPeaks automatically. You also receive an e-mail showing what you have done.

But wait! There’s more! In addition to the excellent videos, app subscribers have access to three 10 Week Training Plans (Novice, Intermediate, Advanced) and two 3 Week Training Plans (Speed, Climbing) which use a combination of the videos plus no fewer than 20 short videos of yoga for cyclists. The training plans are very clear and full explanations are provided so that you understand the reason for each element. They were devised by Neal Henderson of APEX Coaching in Boulder, Colorado, who coached Evelyn Stevens and Rohan Dennis in their successful One Hour Record rides.

As individual videos were each typically $12-17 as downloads, the $10 subscription fee seems very reasonable as it gives you access to all the training videos, the yoga videos and the training plans. Living as I do in a place described has having nine months of winter and three of bad skating, TTBS is a real danger but the Sufferfest has provided excellent motivation for me on the bike since 2010 and a great community on Facebook that is enthusiastic, supportive, and very humorous. You can try the app for a week for free and I am sure you will find it as easy to use as I have. Many of those on Facebook have written of their improvement in fitness and speed but sometimes just having fun is enough. Even if you don’t want a tattoo.

For more information, simply tune your web to: www.thesufferfest.com

Leslie Reissner, who has, to his amazement, ridden all five Tours of Sufferlandria and achieved Knighthood status in January 2017, may be found drinking Sufferlandria’s finest wine (“starts off harsh, becomes harsher and end with a harsh aftertaste”) at www.tindonkey.com