Frame Builder Interview: The manufacture of hand made bike frames is a combination of artist and engineer with an understanding of ergonomics and bike geometry, and one exponent of the art is Kelly Bedford. Ed Hood caught up with the artisan to hear his views on the World of the hand-made bike frame. 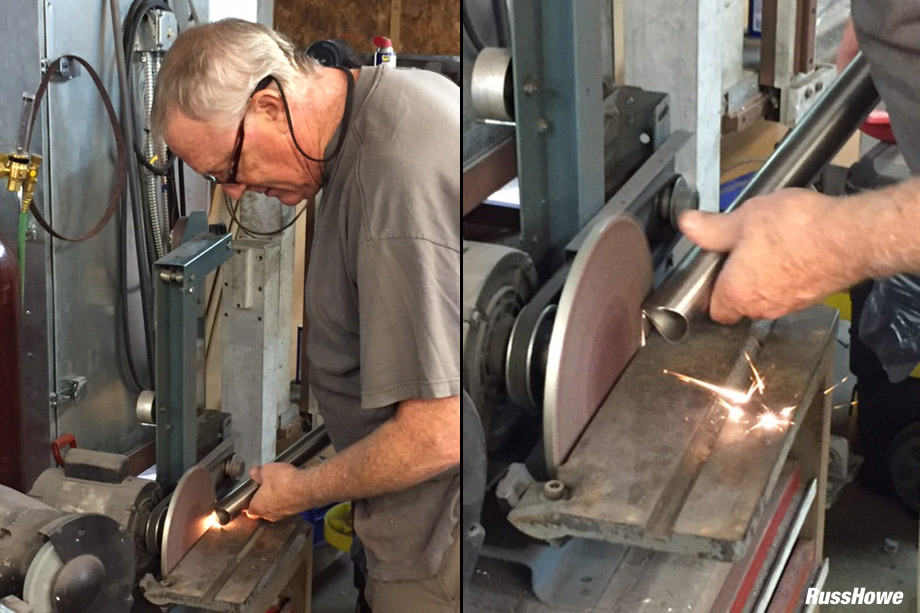 If, like me, you started cycling in the early 70’s then you’ve seen it all – steel, aluminum, titanium, carbon and even a brief flirtation with magnesium in the ‘Kirk Precision’ frames – whilst my dad even remembered track frames built with bamboo tubes. 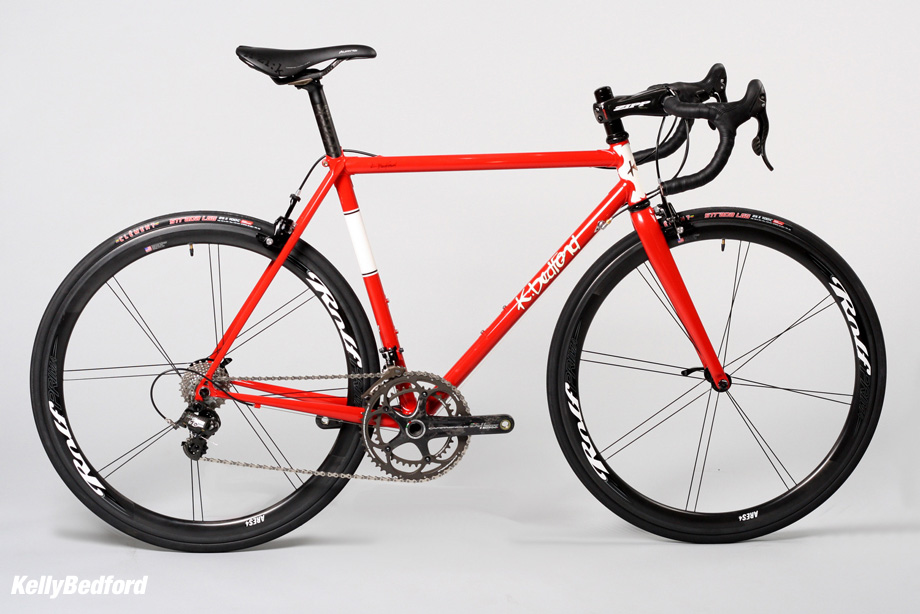 Whilst steel has never really gone away and more and more specialist ‘old school’ steel frame builders are springing up, every time you pick up a cycling magazine there’s yet another carbon frame on the market – or ‘plastic’ as some would have it – we thought it was time to speak to someone who could give us an overview on the whole bike frame spectrum. 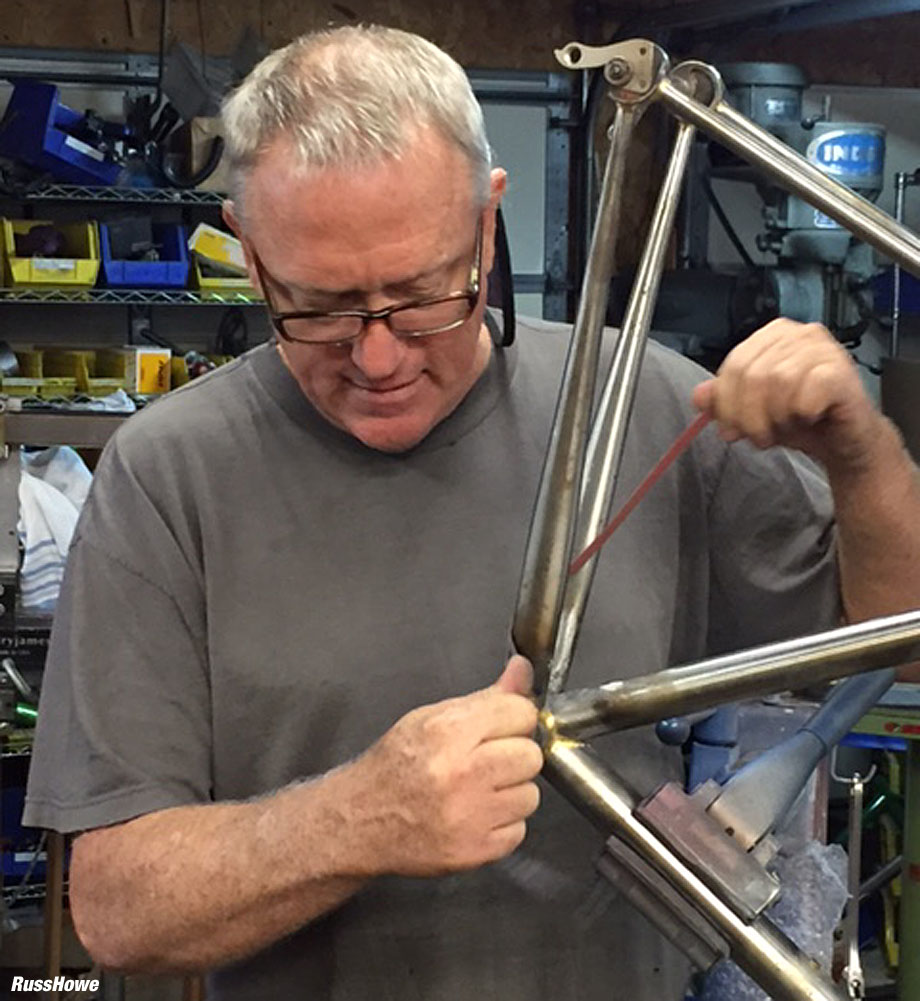 Working on a lugless frame

If you’re a PEZ regular you’ll remember that back in 2013, PEZ tech guru, Charles Manantan had a frame built by a certain Mr. Kelly Bedford? And since then one of Mr. Bedford’s creations has featured in our ‘Reader’s Rigs.’ 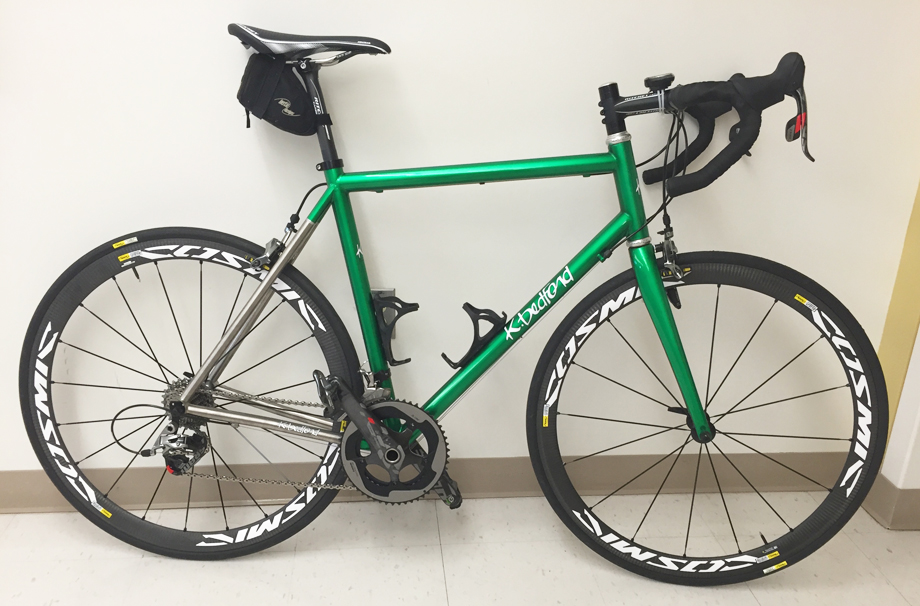 What’s special about Bedford is that he builds in steel – lugged and lugless, titanium, carbon and aluminum. This is the guy I need to speak to who can answer all these questions that have going round my head about bike frames.

Kelly Bedford first went to the legendary Serotta factory for an interview cum test in Jan/Feb of 1986. Ben Serotta was the bench mark frame builder back in the 80’s with his creations being ridden in the Tour de France and winning more US races than tongue can tell. It was at this time that Serotta tested Bedford’s skills on taking weight out of a steel lug set. Bedford being a self taught frame builder whose reputation was spreading. During the spring of 1986, Serotta mailed Bedford lugs to Florida, Kelly cut them and hand shaped them to his design and then mailed the lugs back to the Serotta factory. These lugs were used in the 1986 “Huffy” bikes built by Serotta and ridden by the 7-eleven team. Kelly was not an actual employee at the time and he did not build the Huffy bikes, just cut the lugs. 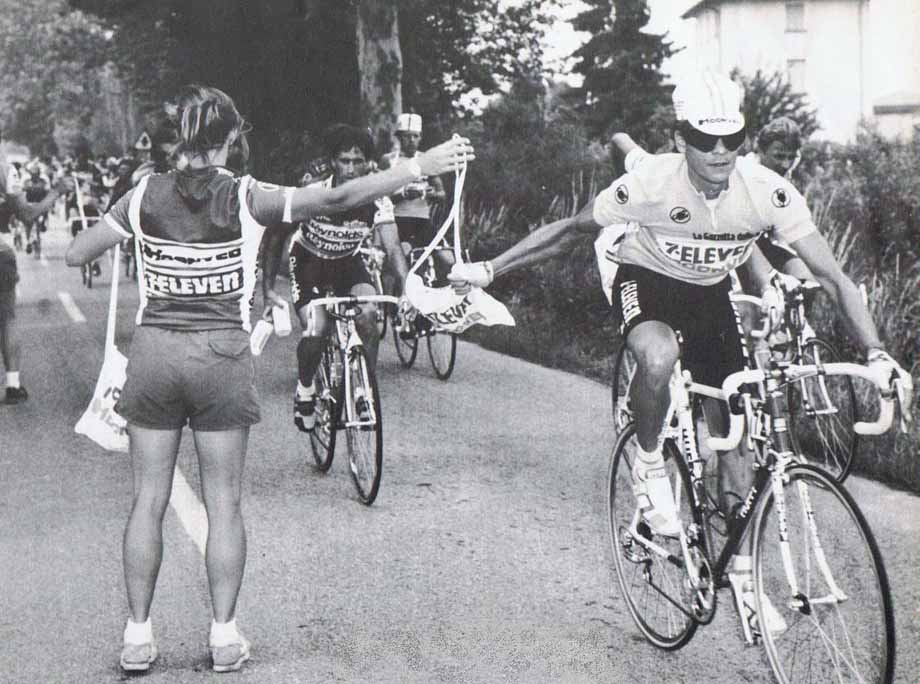 Hampsten on his Huffy in the Giro

By the first year that Serotta built the Coors Light team bikes, Bedford had joined Serotta and he built all of the team frames. Bedford would stay with Serotta for 21 years before launching his own line of frames. 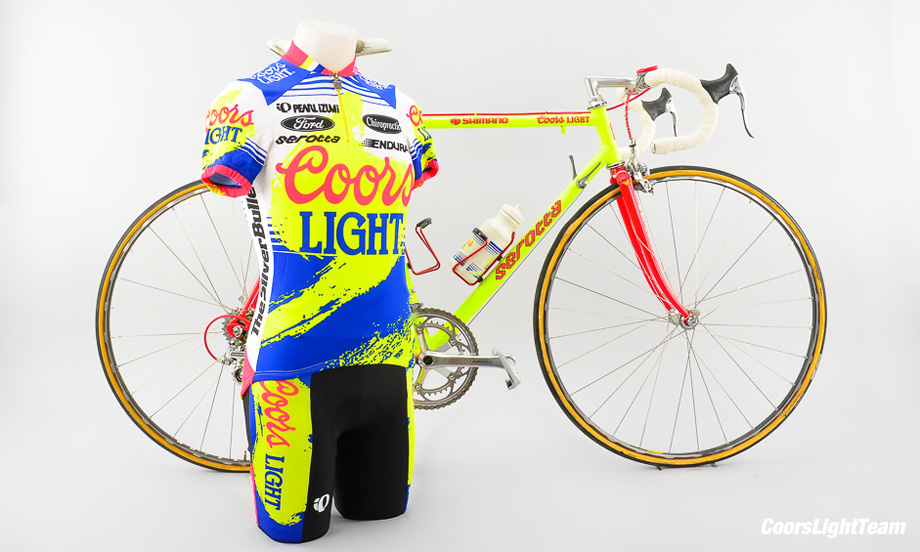 We kicked off by asking Bedford how important feedback from the riders was in producing frames for professional bike racing.
Kelly Bedford: Oh yeah – it’s always very important, especially when Serotta launched the new ‘Colorado’ frame. Up until then frames had been traditional with straight tubes but the Colorados had shaped tubes and curved chainstays. Reaction from riders like Ron Kiefel and Davis Phinney was something we sought and listened to – I remember us making Davis’s frame progressively stiffer on the three or four occasions until he was happy. Serottas were ridden to a lot of big wins; and not just by the 7-eleven guys, Pascal Richard won the Olympics on a titanium Serotta, despite the frame decals saying ‘Coppi’ – if you check the rear brake bridge that confirms it. It’s a bit like how the cattle rustlers used to do it! 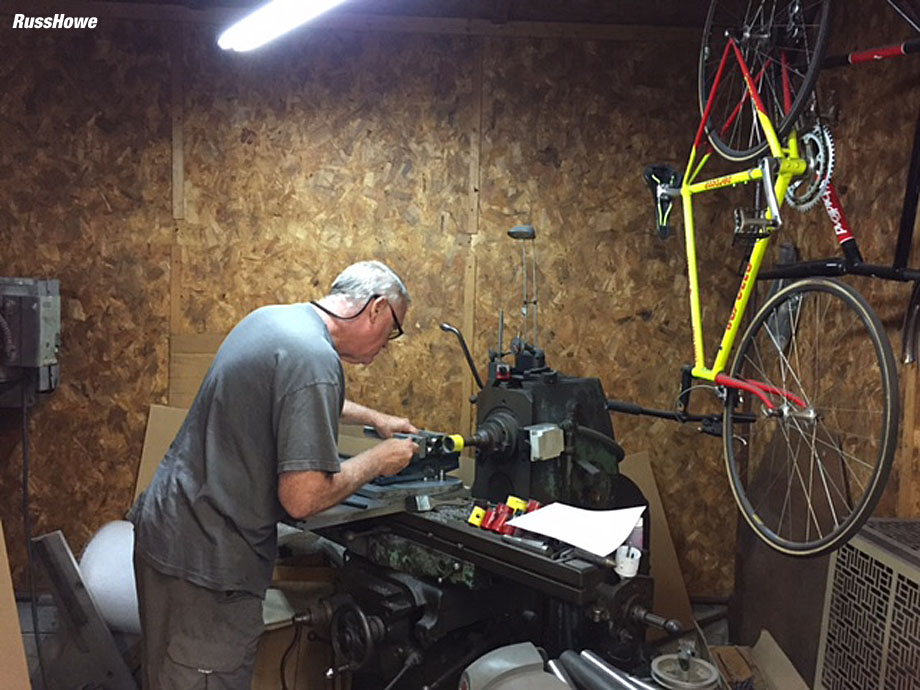 Hard at it in the workshop

PEZ: A year ago we spoke to Sen. Masi in Milan, he said of carbon frames; ‘c’est la mode’ – the fashion – he reckoned the future was stainless steel?
As aluminum came in, steel slipped back and then carbon came along – but Columbus and Reynolds kept steel going; working with higher tensile steel so you could make the tube walls thinner and therefore lighter. Stainless has pretty much the same properties as conventional steel; obviously there’s the resistance to corrosion as a plus factor but it’s expensive and hard to work with. The aerospace industry has been a factor in the development of steel with different alloys which actually get stronger when heated – having very thin walls but larger diameters. Steel is now pretty competitive when set against titanium – but we have to accept that carbon is here to stay. The material is incorporated in more and more everyday items and the price is coming down all the time as it becomes more of an everyday product.

PEZ: Who buys still buys steel?
Generally, the client will be a little older and will have experienced riding steel frames in the past, the ride ‘feel’ with steel is hard to match. Weight is not as big an issue with them and they prefer a fully customized frame – not a carbon ‘off the shelf’ product. We can easily do whatever you want, so the bike is for you and you alone – and there’s such a huge range of tubing we can give you the geometry you want whether with lugged construction or welded. 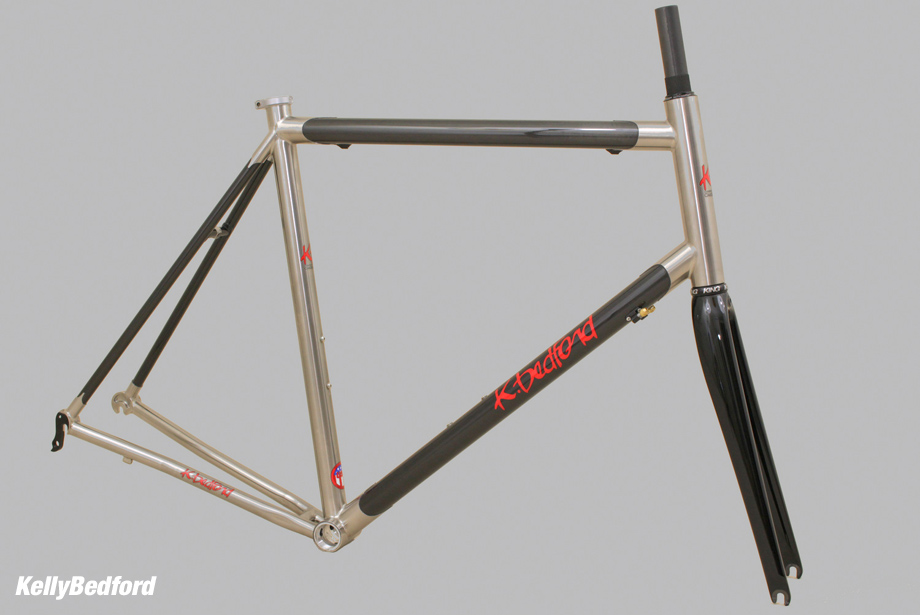 PEZ: You were in at the start of carbon with the Serotta Ottrott which had carbon tubes with titanium lugs – and still prefer lugged construction to monocoque, I believe?
The Ottrott was a composite design, yes; it was torsionally very stiff, with quick handling and was very comfortable. If you speak to folks with a lot of ride experience they’ll tell you that monocoques are very high performance but not the most comfortable. For me, the titanium/carbon mix gives you a comfort level beyond compare – a smooth ride, torsionally stiff but stiff along its length. And there’s the custom aspect that you can’t get with a monocoque – a frame like our Titanium Carbon gives you the geometry you want.

PEZ: Why always carbon forks?
Not always, some folks who we are building a classic or touring frame for still go for steel.
Carbon forks are stiff but give comfort, performance and high resistance to twisting force – you want accuracy on descents, no fork flex. And there’s such a range of forks available now that it’s not difficult to get what you want. 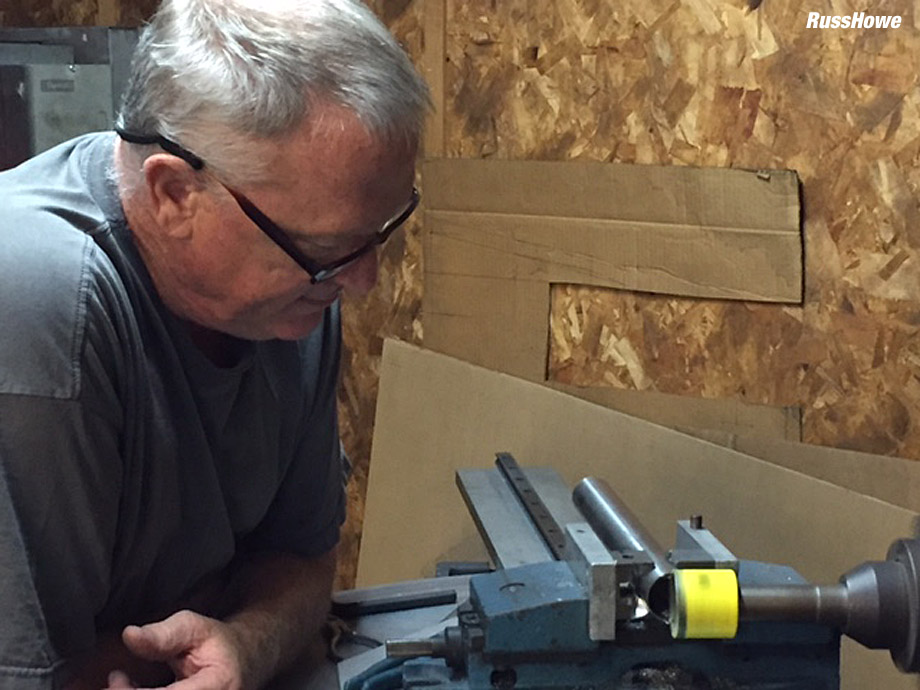 PEZ: Steel – lugs or lugless welded?
Around 98% of the steel frames we build are welded, large diameter steel which is shaped and then welded or brazed – it’s strong and efficient. Many of the traditional lug manufacturers like Nervex and Prugnat have been taken over or absorbed but there’s still product out there, Richard Sachs and Llewellyn still produce them. 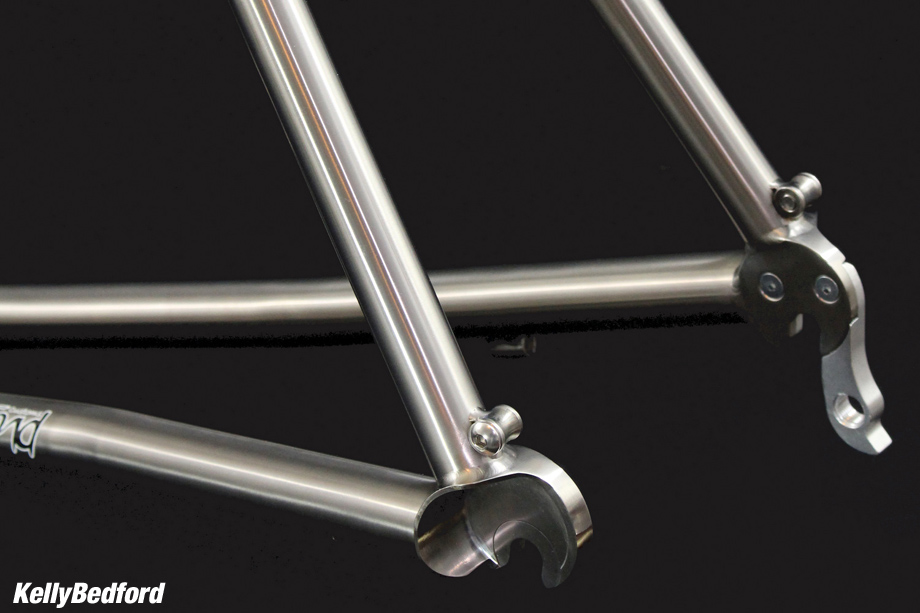 Drop-outs on a Ti frame

PEZ: In my youth your bike had to have Campagnolo fork ends, is that still the case on steel frames?
Those ends were forged out of mild steel and were a nice product – now there’s a whole bunch of names out there producing cast ends to a high quality. The modern fork ends need a lot less brazing work to fit than the old designs. 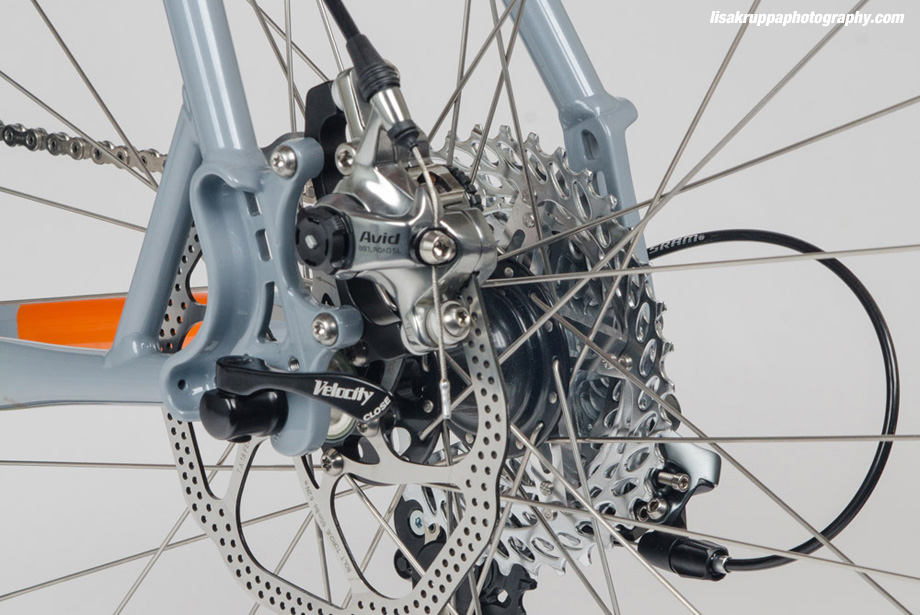 PEZ: Discs, do you make your own mounts to take them?
No, we very rarely make stuff like that, we buy them in – but accuracy is so important, the mounts and drop outs have to be in perfect alignment and they put a lot of stress on the fork ends so demand strength in those areas. They’re not going to go away – we see it in our order book, more and more folks are specifying them. What’s good is that everything that goes with them is getting that bit lighter. 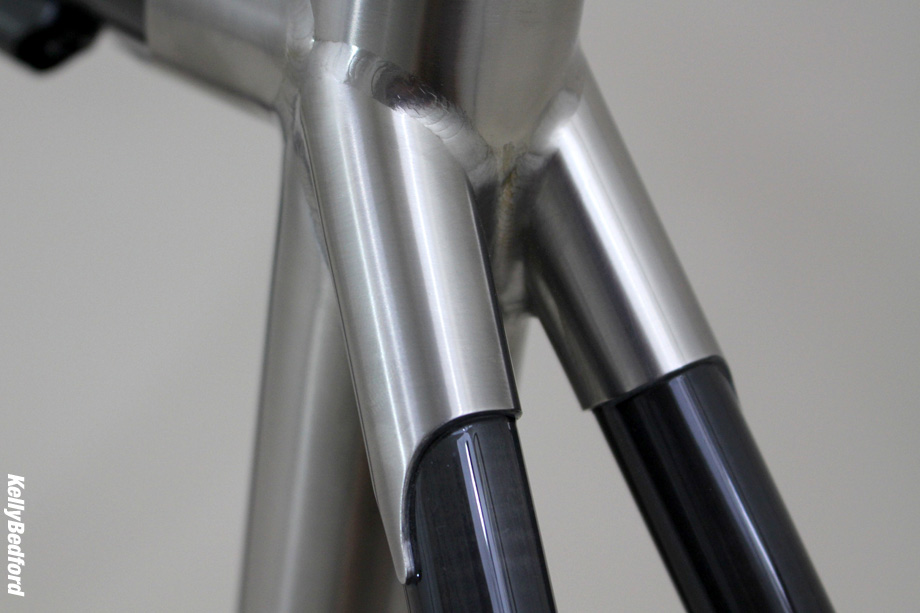 PEZ: Magnesium?
I don’t think it’ll ever play a role, it’s expensive and tough to work with and very difficult to repair. If you look at motor sport where weight is so important, it’s only on the Formula One cars, it’s not even on the high end GT cars. 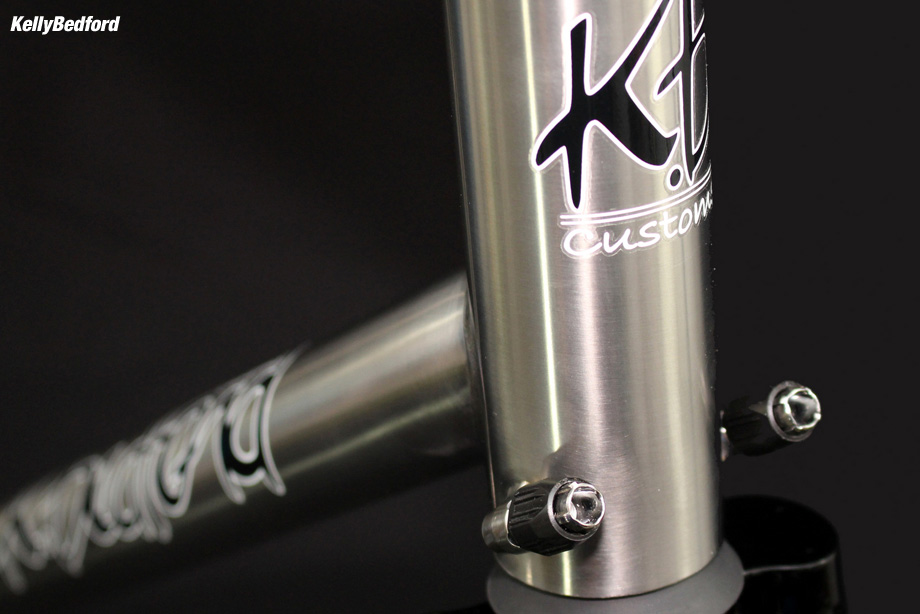 The clean lines of the Ti head tube

PEZ: What’s your personal favorite frame?
Steel; I have to admit that as a busy frame builder I don’t get out on the bike as much as I’d like but steel is my favorite. Titanium is that bit lighter and very high performance and has terrific longevity – cleans up beautifully if it’s been neglected, which is another ‘plus’ point. But at 62 ride comfort is now very important to me!

# And if my lottery numbers come up I’ll certainly be ordering one of Kelly’s Titanium Carbon gems. More information on the Kelly Bedford Customs website. # 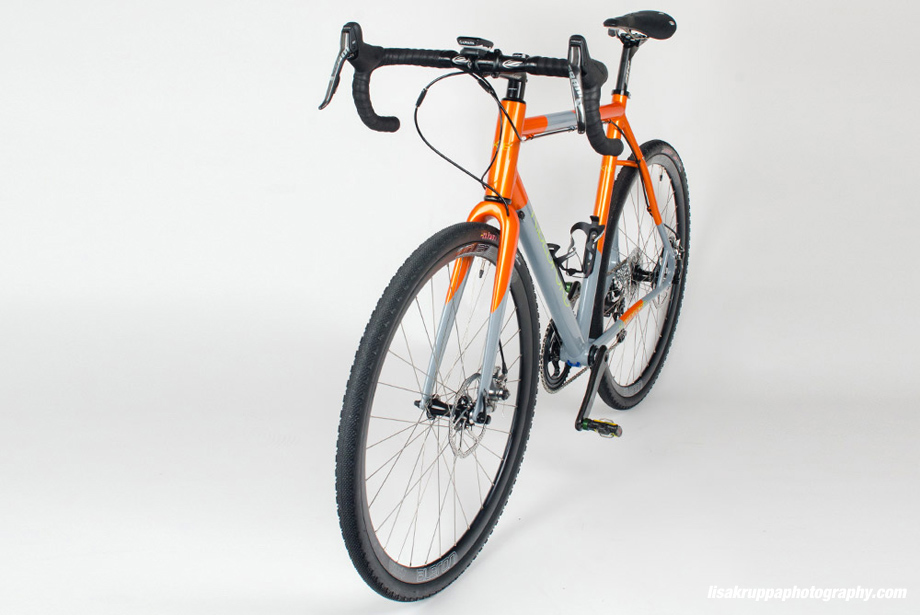 It was November 2005 when Ed Hood first penned a piece for PEZ, on US legend Mike Neel. Since then he’s covered all of the Grand Tours and Monuments for PEZ and has an article count in excess of 1,570 in the archive. He was a Scottish champion cyclist himself – many years and kilograms ago – and still owns a Klein Attitude, Dura Ace carbon Giant and a Fixie. He and fellow Scot and PEZ contributor Martin Williamson run the Scottish site www.veloveritas.co.uk where more of his musings on our sport can be found.
Like PEZ? Why not subscribe to our weekly newsletter to receive updates and reminders on what's cool in road cycling?

Is This the Coolest E-Bike Ever?