Our man on the scene, Ed Hood, gets up close and comfortable with the bikes of the men that are defining this Tour de France. Without them, there’s no Tour, let’s take a look at the hardware that’s doing the business, en France.

As befits the bikes that are going to finish first and second (maybe?), we give Trek maximum coverage. 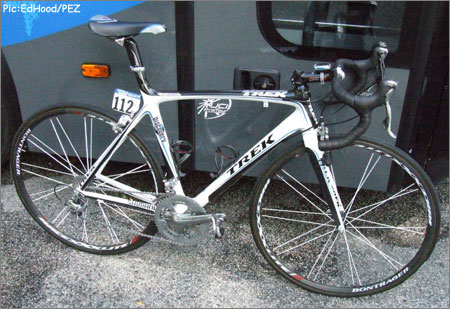 Mechanic, Alan Buttler is in charge of nick-names at Disco; Alberto Contador is, “Bert”. When we visited Alan for our rest day chat, there was Bert’s Trek. “Can we have a look at it?” we asked Alan’s colleague, Chris. “For sure! It’s not my bike!”

The 07 Trek has been much discussed and photographed, but the real acid test, is to talk to the mechanics.

PEZ: Is the new frame available to the public yet?

Alan: No, these are still the first batch, it was debuted at the Dauphine, but the guys were riding them in training before that, to test them, with no paint or decals. There are some big changes from the 06 frame, the most obvious ones are that they are compact framesets with sloping top tubes; integrated headsets and bottom brackets.
[Ed Note: The new Madones are starting to arrive at US dealers now, and a couple have already been spotted on the roads.] 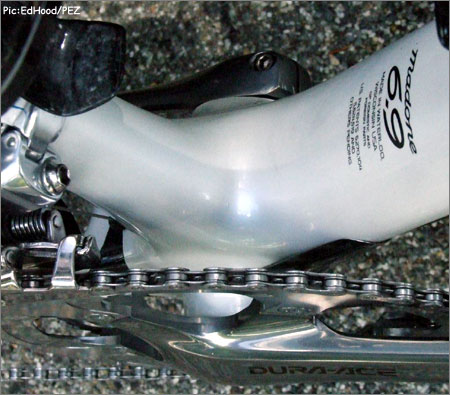 Alan: Yes, they are simple and quick to install or change, but the real answer is that it’s a bit early to tell. The pros give their bikes such a hammering, unlike anything your normal ‘punter’ would ever inflict on a machine; so we’ll see how things develop over the season. 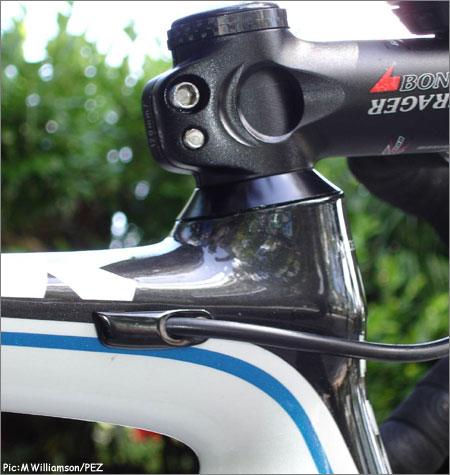 PEZ: Do you use ceramic bearings?

Alan: Yes, in the bottom bracket and hubs, but not the headsets. We use them in the rollers of the rear mechs on some of the time trial bikes too. 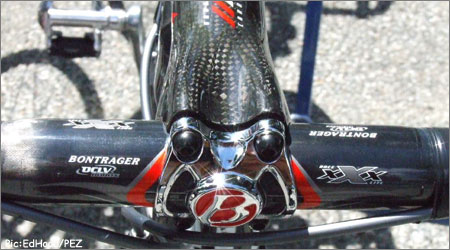 Alan: Good, the bulk of our guys aren’t too much into that sort of thing, as long as everything works well. Levi is the exception though, he’s fastidious about weight, his bike comes in at 6.8 kilograms. Bert’s bike weighs 7.0 kilograms, but Levi has carbon bars and a super-light saddle on his. 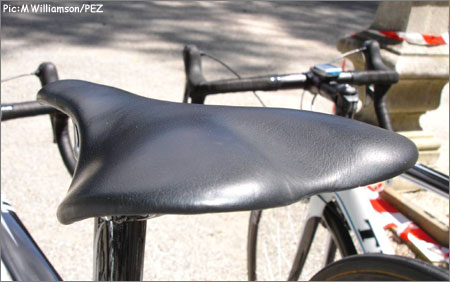 PEZ: Why the numbers on the rear brakes?

Alan: On the smaller bikes, if the numbers are fitted in the usual place, they can catch on the bottle. We’re thinking about maybe having number bosses fitted behind the seat-tube. 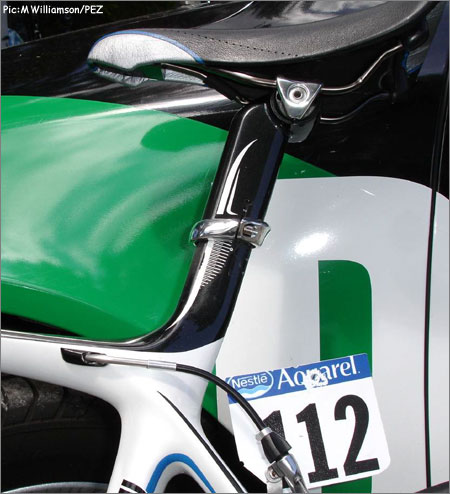 Alan: Very few, just a few adjustments to the cable routing, we could do with the gear cable stops sitting a little bit higher, but we talk to Trek all the time about developing the design.

From a “punters” view, Martin and I like the design and fresh paint-job a lot, they are very ‘now’ and the integrated bracket looks great. We’d just like to see a little less space between the back tyre and the seat tube, though.

The story is, that it was only Lance’s conservatism about frame design that stopped Trek from going compact; a man who can win seven Tours has clout like that.

Lance moving-on wasn’t best news for Trek and Disco, but we reckon the frame design moving-on is great news for them both. 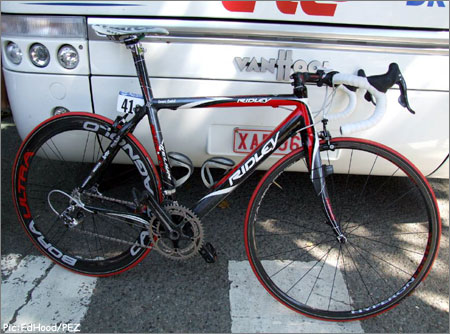 Ridley’s relentless quest for perfection continues with the “Helium”, developed from the “Noah” but with more vertical compliance built-in to the carbon, Predictor’s Dario Cioni tells us that it’s much more comfortable for races like the Tour, where one 200 kilometre stage follows another. A few seasons ago it looked like the inegrated (or fly-through) seat tube was going to rule the roost, however it’s popularity has waned, maybe due to its propensity to give too harsh a ride; but Ridley stay loyal to the concept. A well-designed seat clamp set-up tops it off nicely. 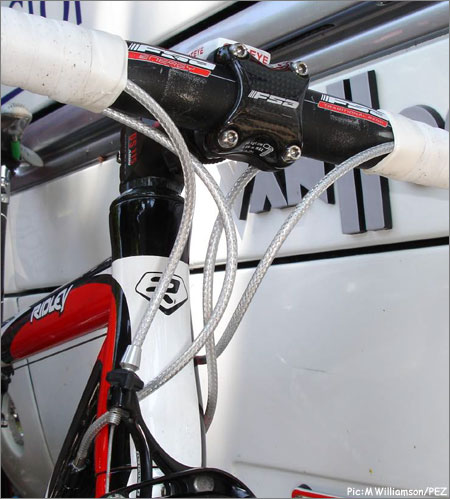 FSA bars ans stems – the same stuff you can buy at home. 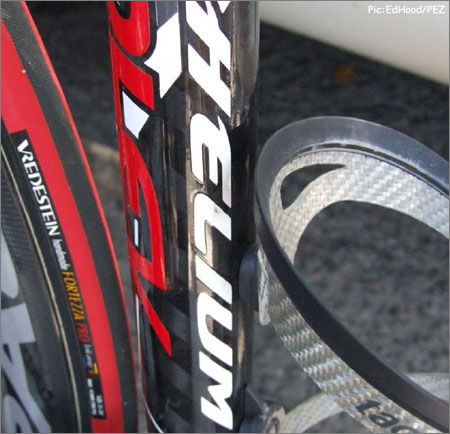 Cable routing on the Ridleys is super-neat with ‘braided’ outer employed – nice. Evans, as do most of the peloton, rides shallow, ‘square’ bars, the craze for ‘anatomic’ bends has died. The ‘bottoms’ of the bars are set to slope upwards, which makes the reach of the bar sit flat, the brake levers are set so the hand sits smoothly across bar and lever. 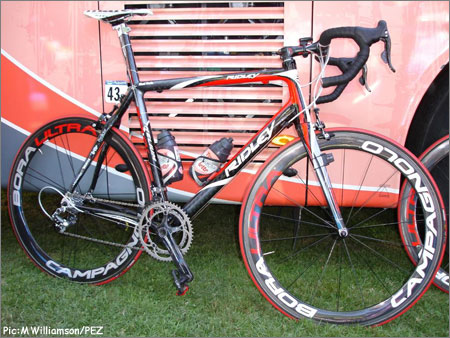 The Ridley’s colour scheme sounds a tad insipid – grey, white and black, but sit a rider on it, and it all works; especially when you set it off with those nice red Vredestein rubber and a 2007 Campag groupset. 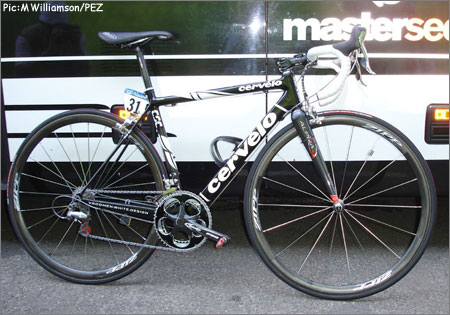 Carlos Sastre’s Cervelo SL R3 is one of the nicest proportioned machines in the peloton, plenty of seat pillar on display and the extension hard-down on the top head race – nice. ‘Box-girder’ chainstays look great, but the skinny when viewed from the side, ovalised seatstays aren’t to everyone’s taste. Shimano do the stopping and shifting, but FSA do the cranking, in carbon – neat. 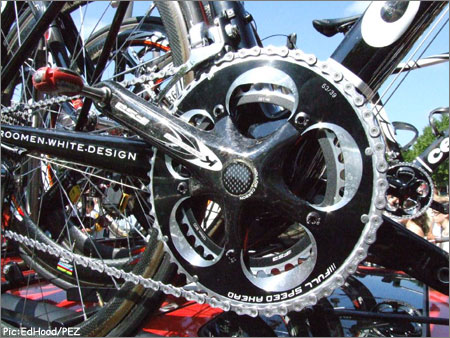 Riis’ team stays loyal to Speedplay; new riders come to the team and say; “I ride Shimano pedals!” The reply is standard; “Not at CSC you don’t, now you ride Speedplay!” Zipp continue as long-term wheel partners. The black and white paint job works well with the team strip, but a little more red in there would do no harm, as with Cadel’s Ridley, the red tyres look good; this time Vittorias. 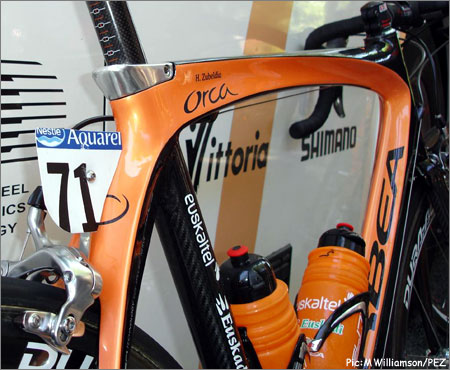 I used to love Orbea’s vivid orange paint jobs for the Euskaltel frames, but this latest colour scheme just seems too ‘washed-out’ for my eye. The lines of the bike aren’t right for me either, curved seatstays should mean curved forks at the front. The bikes are all-Shimano, including the wheels. Let’s move-on! 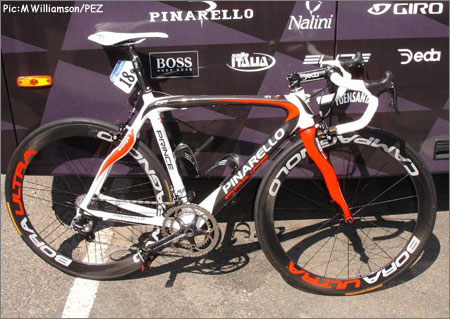 “Bring back the Prince”, goes the Ska song, and that’s exactly what Pinarello have done. It took a bit of getting used to, but now those sculpted front and rear forks just look so damn cool; this frame is carbon at its best. Valverde’s machine is of similar proportions to Sastre’s and just looks ‘right’. The red, white and black colour scheme is lovely and goes so well with the team jerseys. Campag – what else, on a Pinarello? – rounds-off the package perfectly. 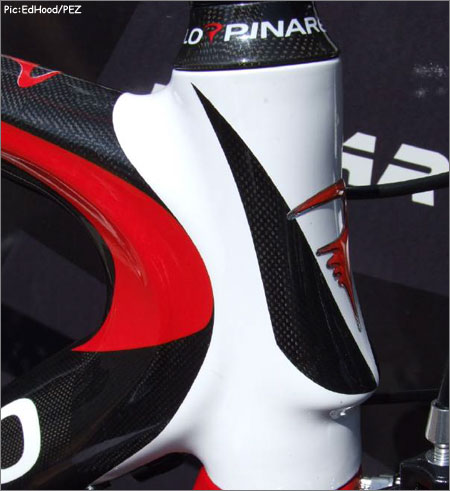 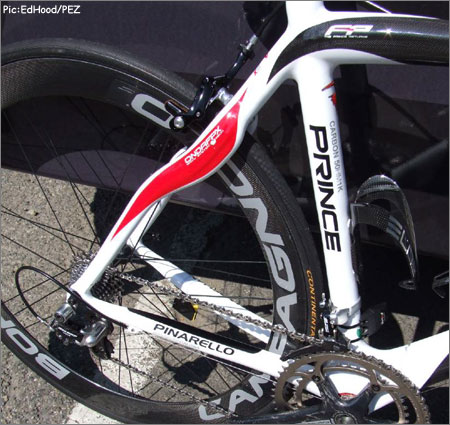 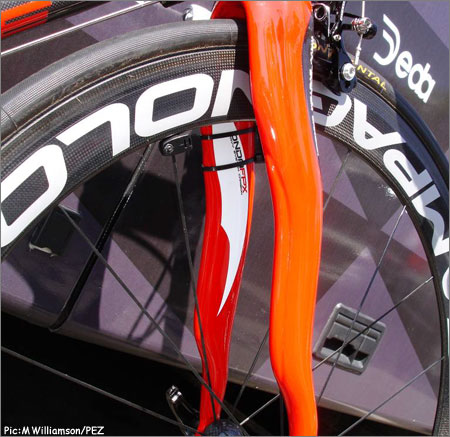 And how about the other classifications? Let’s take a peek at the green and polka dot jersey’s steads.
SPECIALIZED: Tom Boonen (QuickStep & Belgium) current maillot vert. 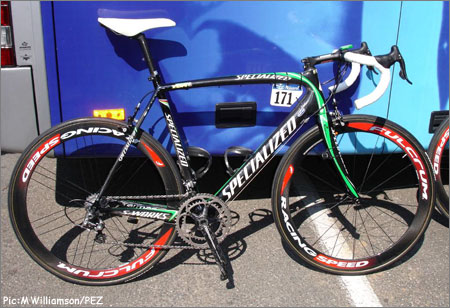 Specialized had problems, earlier this year getting it right for the ‘Tornado’. There were Belgians lying awake at night, fretting about Tom’s bike, back in April. But everything looks like it’s ‘ice cream and fairies’ for Tomeke and Specialized now. The black and green colour scheme isn’t too over the top and works well. All-Campagnolo; you can’t go wrong with that, and in case you wondered, he rides 175 cranks. Oh! I nearly forgot, the computer is green too!

CANNONDALE: Juan Mauricio Soler (Barloworld & Colombia) who has already won the king of the mountains. 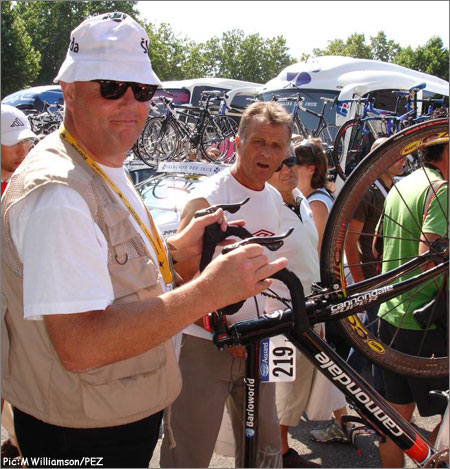 Soler’s bike was last seen here…is that Ed running away with it? 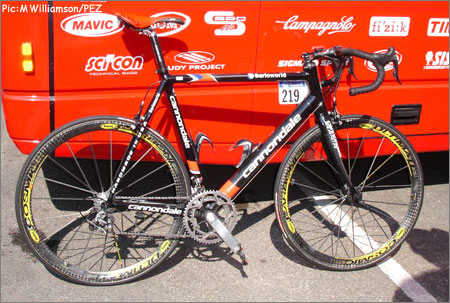 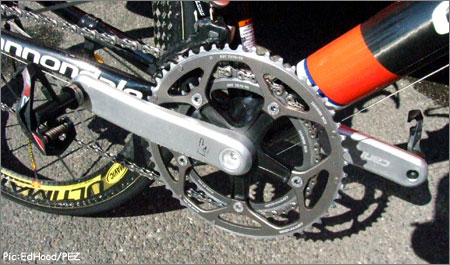 The Liquigas Cannondales are among the nicest bikes on the race, but the Barloworld spray job is just lacking something. Big bikes always look a bit gate-like, and this one is no exception. Cannondales own cranks suite with TA rings, Campag gears and brakes whilst the hoops are the latest Mavic Cosmic Carbone Ultimate – light! 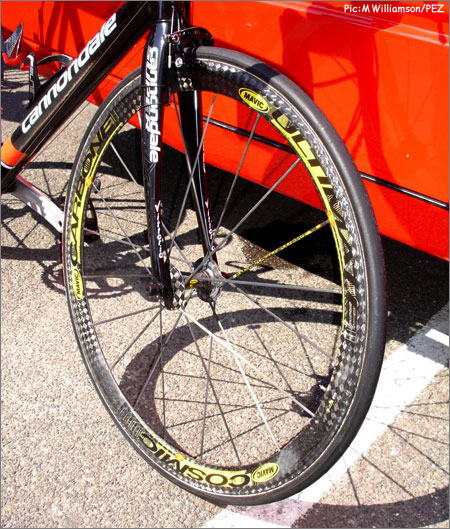 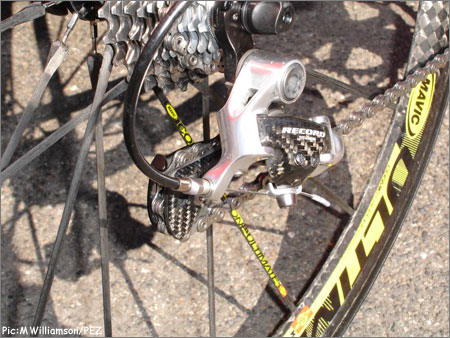 There you have it, the top six plus the green and polka dot jerseys – that took one hell of a lot of ‘pleases’ and ‘thank you’s’ to mechanics, we hope you enjoyed it as much as we did.

TDF’07 St.19: Three With Yellow In Their Sights