You’d think the bike brands would be thrilled to get some exposure, but getting mechanics to let you snap a few pics is not always easy. Good thing we’ve got a nose for news and can sniff a scoop, so we snapped some cool tech at the start of the stage 7 TT…

As Discovery mechanic Alan Butler told me this morning, “everybody is bored
with this sprinting carry-on – we need a proper race.”

Saturday’s TT is indeed a ‘proper race’, 52 kilometres against the watch, alone and un-paced alongside the wheat and maize fields around Rennes. Long straights, heart-breaking drags and some technical stuff for good
measure requires a ‘proper’ bicycle.

We were annoying the mechanics before they had the trucks unloaded to bring you the best pictures of what’s Pez-worthy in the 2006 chrono-world.

SCOTT
I managed to get a couple of pictures of David Millar’s Scott before the wraps went on like they did at the prologue. Scott’s black beauties have always been well-up our ‘wish-list’, they do the ‘stealth’ look so well, set-off by those big front forks and yellow graphics. In addition, Scott have demonstrated that time test bikes CAN be light – one of our favourites. 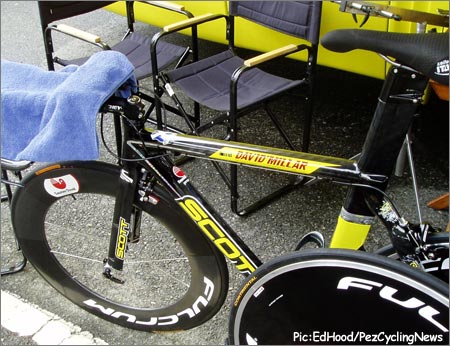 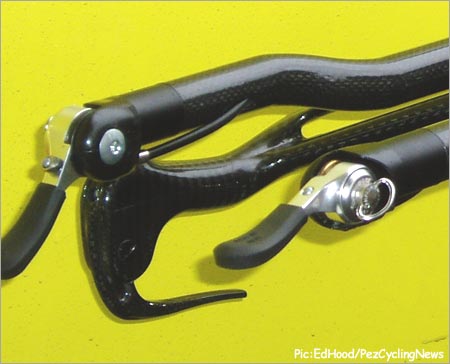 • It runs ‘biplane’ tri-bars with the brake levers moulded into the ends and a concealed front brake as well as some tricky graphics – like he said to us; ‘the bike I always wanted.’ 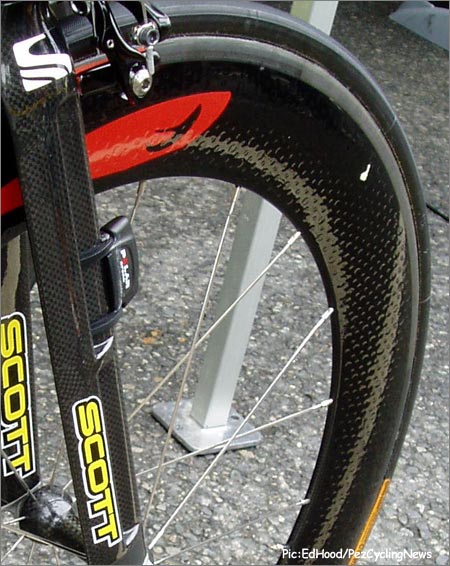 • They might have a different sticker on ‘em but these sure look like those Zipps we scooped Friday.

CERVELO
Continuing in the tradition of North American-designed bicycles having
success in Europe, the boys at Canada’s Cervelo have racked-up the wins with CSC we expected a much better showing considering these bikes deliver the tech side in spades. 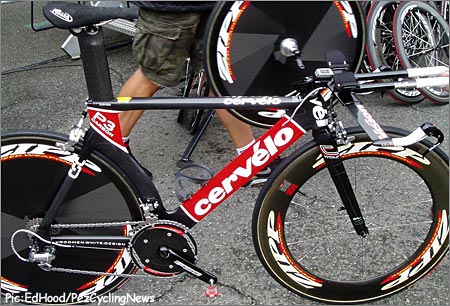 The attention to detail – the curve of the seat tube around the rear tyre, the smooth Nokon cable routing, the aero chain rings, the wind- tunnel perfect positions the riders have, the seat-pin clamping, the colour-scheme and graphics – a perfect package for speed. 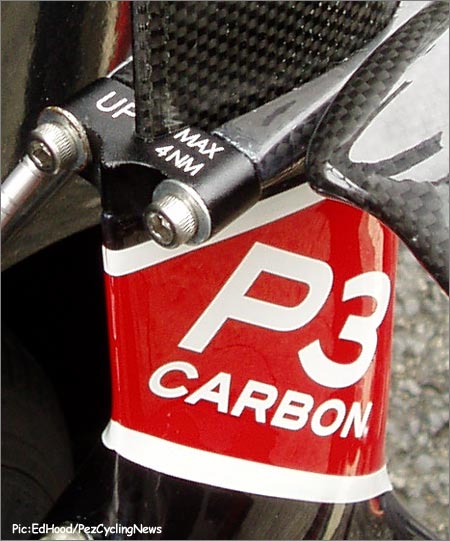 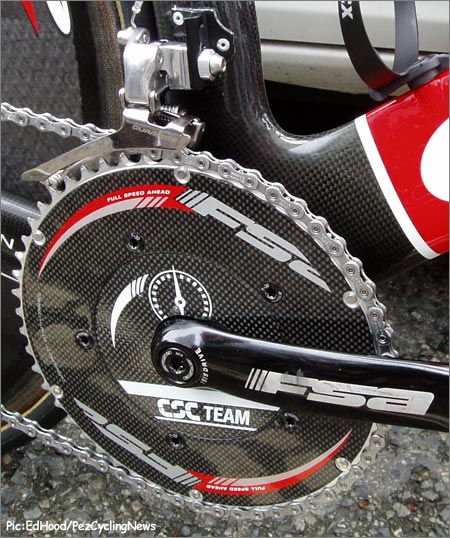 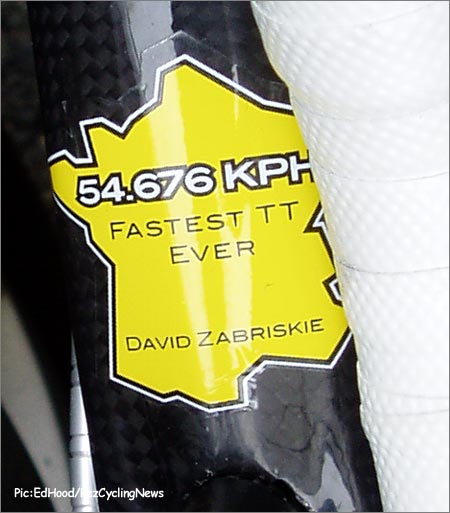 • If Zabriskie needs any reassurance as to how fast he is, he need only glance down to his top tube, where someone has placed this thoughtful reminder.

Colnago/Giant
“Jeepers Wally, why do these two bikes look exactly the same, but have different stickers on ‘em…?” 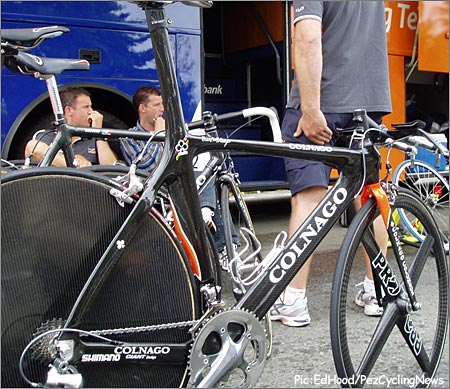 • The “Colnago” Giant project – I guess Rabo liked what they saw in their neighbor’s yard, and wanted some for themselves.

Note the same, well… everything – headtube, seat tubes, stays… on the Giant’s and ‘Colnagos’. 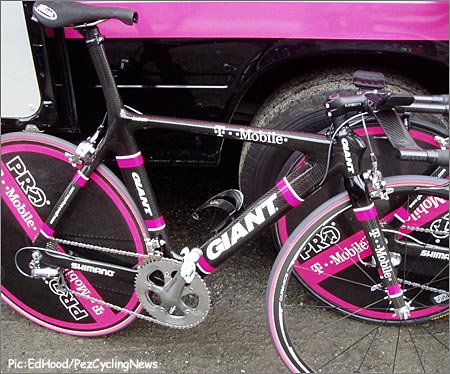 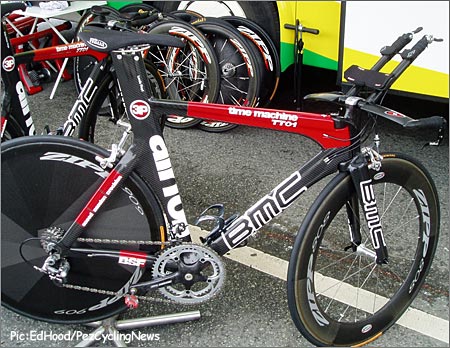 It was no surprise to see Floyd Landis on the podium today, his 90’s ‘hi-rise’ tri-bar position has caused a stir but works for him. Reportedly the UCI stepped in minutes before his start and made him lower the hand position a tad. 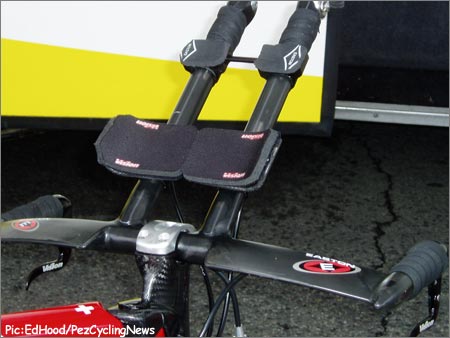 • The one-piece bar that controls Floyd’s bike. It takes a confident man to sport his ‘bars’ and such a proud angle. 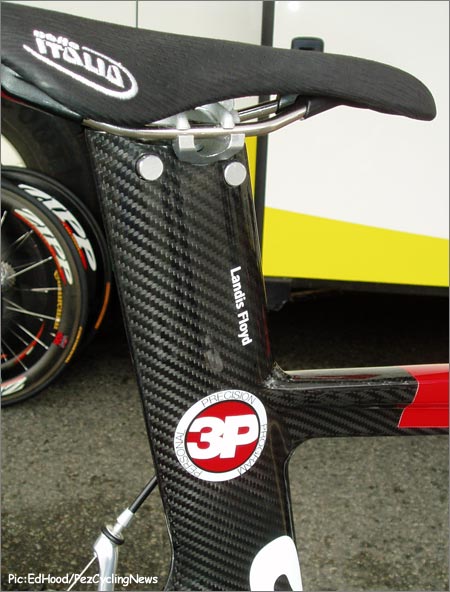 • Some very slick design on the seatpost of Floyd’s BMC Time Machine.

As Crocodile Dundee would say: “That’s not a crankset… 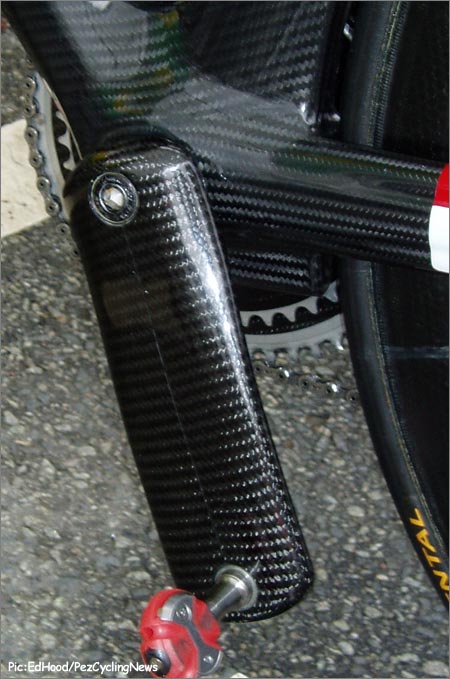 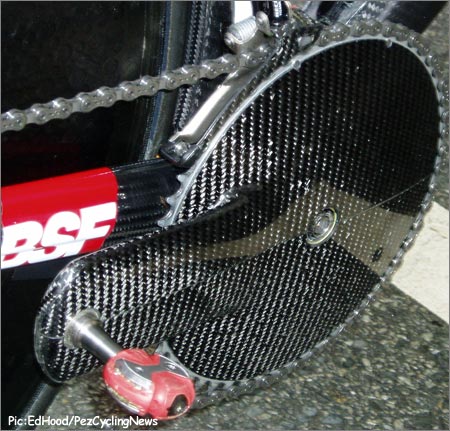 TREK
Life without Lance hasn’t slowed-down development at Trek, there’s a new
model Equinox in the truck, around 100 Gms. lighter than the current model,
but pros don’t like to mess with tried and tested positions in a gig like le
Tour.

The Equinox is hiddenset this year and has great aero seat stays with vertical drop-outs. 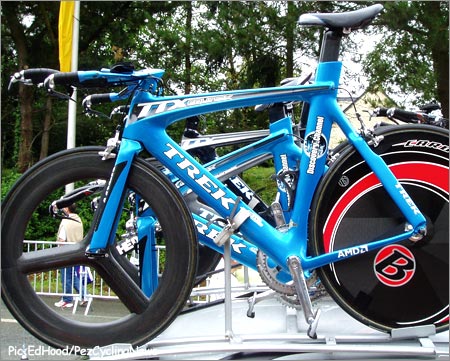 • George’s new Trek tt rigs come in a set – one to ride and one for the roof. 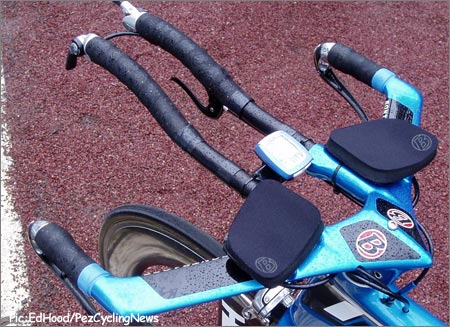 • New too is the blue-anodized Bontrager tri-bar set-up which Big George is
riding in anger for the first time today, they look excellent, note the internal cable routing. 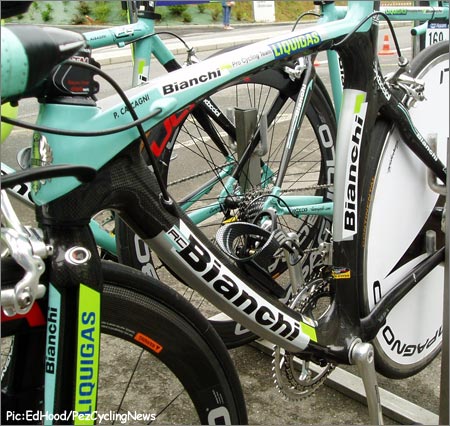 • Bianchi showed up with a typically Italian (ie: stylish) frame for the Liquigas guys. No word, though, on what the wind tunnel said about all those curved tubes.

There’s more to come so keep it tuned to PEZ…

TDF GC: Shake It Up Baby!