If there’s one thing I’ve had a lot of test time with, it’s aftermarket stoppers. Good stuff from Zero Gravity, M5, AX, KCNC and others have all helped do that under rated job of slowing things down.

But while I like most of the aftermarket stuff, not everyone likes the greater modulation range (AKA longer pull) required from some of the ultra-light sets. SRAM and Shimano users might find the QR lacking on some brake sets and several will find the general stiffness allows for more brake chatter and pulsing, especially with some carbon wheel and brake pad combo’s.

In come TRP with the 960 and their version… 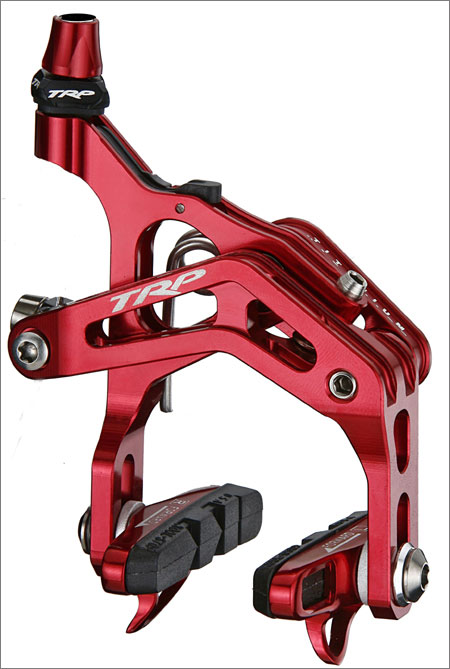 TRP?
Right off the bat, let’s get the “TRP” bias out of the way…

I am a bike snob and in the past, Tektro simply have not rated my using them. Not that the company put out anything I recall as being poorly made, they just lacked that ooh/ahh. Call it snobby, hell, call it what you want, they just didn’t rate.

Then last year I got a set of the TRP 950 carbons. They just plain looked hotter than anyone’s stock brakes, so I decided to use them on the Repsol Kuota KOM. 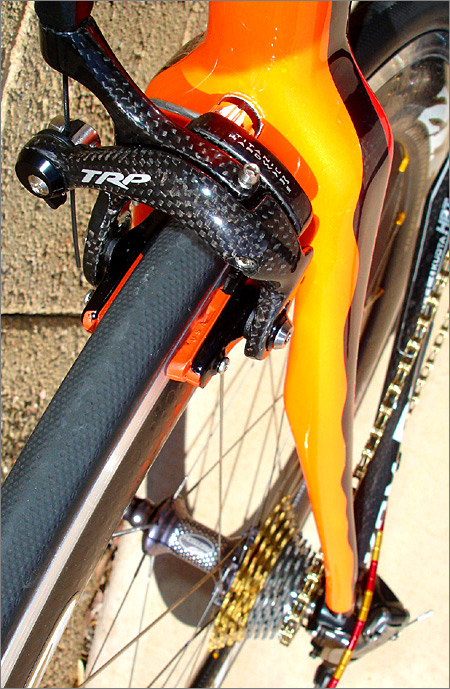 Turned out that performance wise these were similar to Campy Record and SRAM Red and at a good price, I wound up with a pretty happy surprise.

Forward a year and I got a hold of a set of the prototypes of the new TRP 960’s and it looked and felt like TRP had come along even more in producing a genuine good quality aftermarket product. 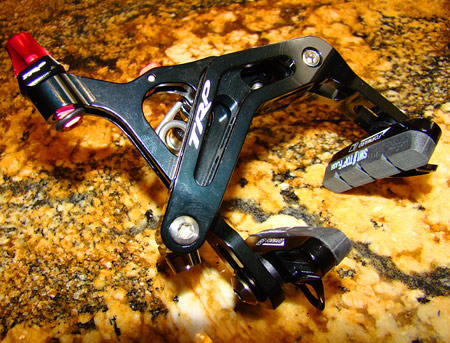 The Design is Basic
The easiest feature to see is the machine work for the new brakes. 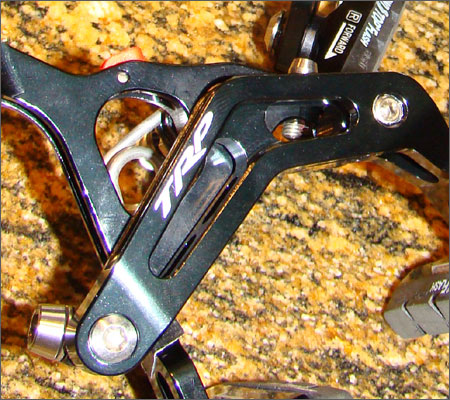 There’s a lot of material removed from the main arm and it looks as if it could be a bit flimsy looking straight ahead. But when you look at it from a few angles and see depth of the material for all of the parts is substantial, and so is the machining from other axis. 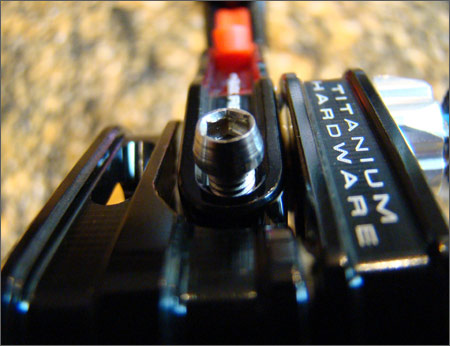 There’s a very large mount of detailed machining going in to these brakes, forming I-beam type structures and paying attention to keeping the structure solid throughout the part.

The piece structures couple with a more traditional dual pivot design than a couple of other high end aftermarket brakes. And TRP use thrust type ball bearings in the pivots which is quite a bit smoother than most light weights. 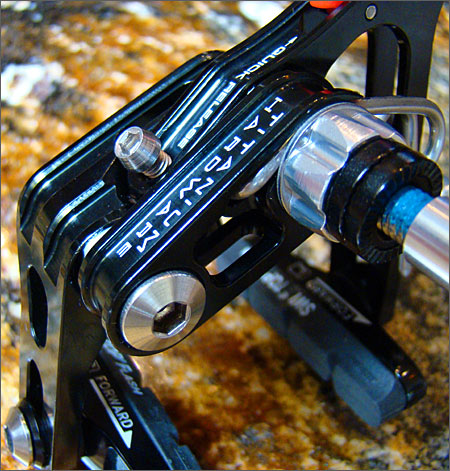 Easy to see from the back that these are pretty close to the same stable and durable design, right down to TRP using the same type of bolt contact on the 960… 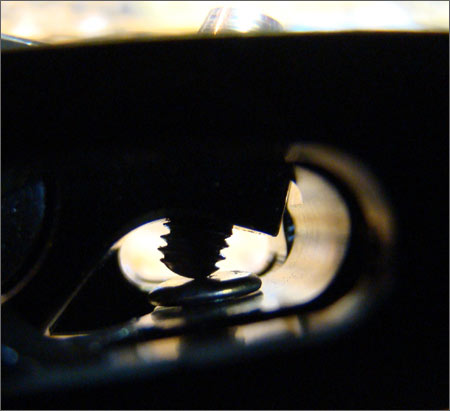 …that is used with stock sets like SRAM Red shown here. 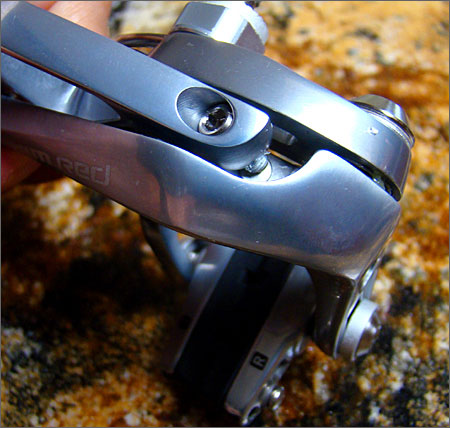 Another feature that functions VERY well on the TRP is their take on a QR. It is a simple composite part that sits nestled in the machined out cavity in the cable stop arm (shown in blue here on the prototype we had, but black on the actual production unit) 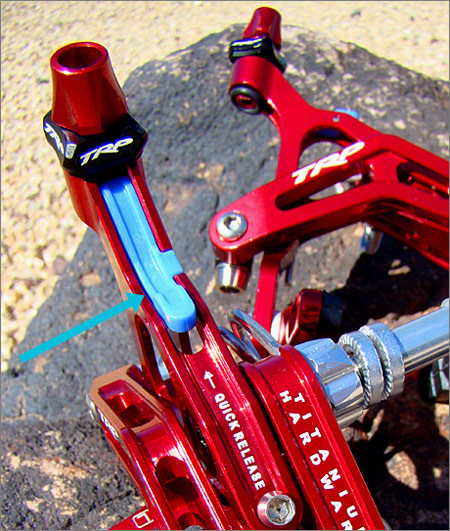 Push one end and it pops up neatly out of the way and allows the cable and cable stop to slip down toward the brake center and open up. 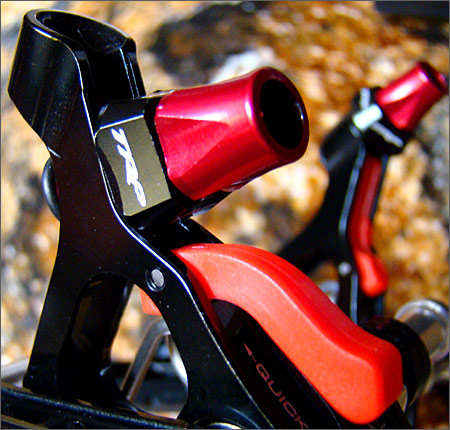 And when open, the brake gives plenty of clearance for removal and replacement of wheels. 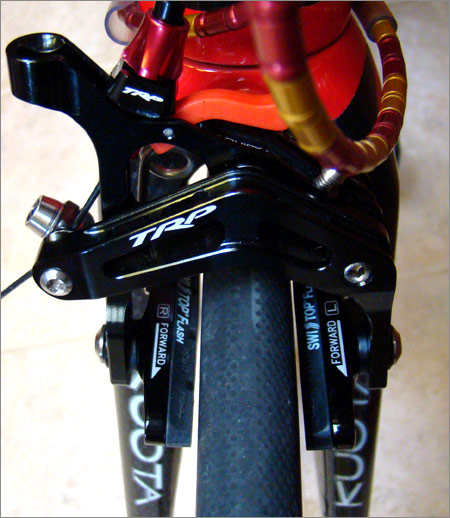 no, the blocks are not toe-out… just a funky camera angle

Another nice feature is a full strength spring. It allows for positive lever return (when you take pressure off the brakes) and even when gunked up, it combines with smooth action bearing pivots and should never bind or stay closed. 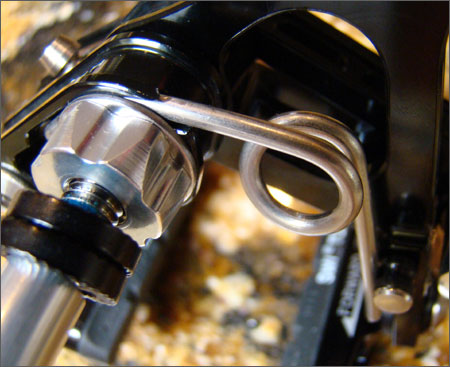 Some aftermarket brakes are tricky to set up because they’re a bit flimsy and, although they are firmly bolted on, a cable length that is a bit off will cause them to rotate round and rub the wheel. The 960 are a more solid set up (all titanium adjustment and fastening hardware, including the center bolt) and held firmly in place with no unwanted rotation.

At the bottom of the pile are the new brake pad holders that are machined out to shed a gram or two. 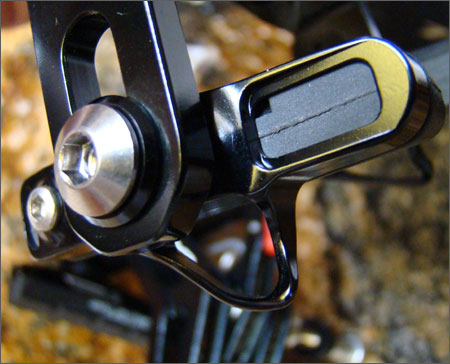 The biggest hassle changing between carbon and metal wheels is swapping your pads.

A plus here is that a second set of pad holders is available at a reasonable price so that you can load it with an alternate type pad and simply screw on the whole unit. That’s way easier than pressing new pads into holders…

And the standard pads loaded into the TRP 960’s are one of my favorites. 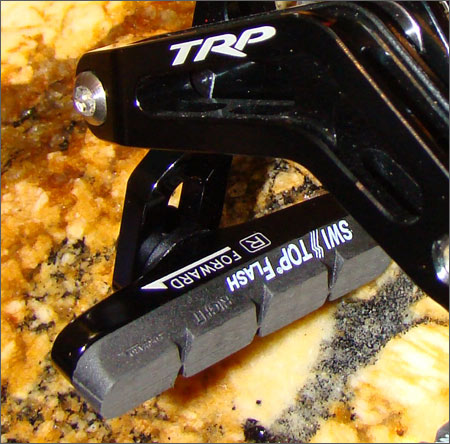 These are top line Swissstop “Flash” pads for metal and their yellow, for carbon, are nice too.

STOP!
All the neat machining and pretty pictures aside, the brakes simply work well.

As far as modulation and ease of use, they are actually a bit stiffer and stable feeling than the stock brakes from Campy and SRAM and are on par with what most folks consider the braking benchmark Dura Ace.

That doesn’t mean the 960’s are everyone’s version of “the best”. A few of the other light weight brakes do have more modulation range and are easier to feather simply because they have less initial bite and allow for a bit more flex. To be honest, I actually like a bit more modulation range than Dura Ace or M5 (though bigger guys will love the TRP for the same reason M5 and D Ace are generally a good option).

The new TRP seem to have a little more feel (sensitivity), allowing for easier modulation, but when you apply force, the pull is very strong and responsive. I find that preferable to the ramp up of force that you get with some light brakes. That extra feel may be down to the bearing pivots allowing for more sensitive feel without sacrificing strength because there’s none of the binding that happens with lighter brakes using bushings (or simply metal on metal friction)…

There’s also no perceivable twist type flex that is present in some other super light brakes. “Twist flex” where the lower legs that hold the pad and shoe allow the pad and shoe to rotate a bit under braking forces as the pads contact the wheel.

You feel that flex in the form of chatter or pulsing as the pads go from flat on the wheel to slightly rotated out as the wheel pushes them (which can also be compounded by uneven rim width)… This is more noticeable with very light carbon wheels and some pads, but with the 960, the lower legs hold more firm than a few light brake sets and the chatter and pulse don’t show as much.

The 960 have a nice combination of modulation, even strength and stability. They really are exceptionally smooth brakes relative to anything else (even non light weights). Couple that with a QR that works very well and that makes the TRP 960, for me, the best all around performing light, aftermarket brake currently available.

Given the very basic dual pivot design and the fact that unlike a couple of competitors, these don’t require as much direct wear (grinding) on large parts, I would be very surprised if these are not far superior in the long term durability department as well.

I will say that these are not the lightest or second or third lightest aftermarket brakes available at 120 grams per wheel. But they still qualify as light in my book, beating the current groupo brake weight king SRAM Red by 25 grams. They beat the current D Ace in weight by a nice tidy 74 grams. Campy they beat by 39 grams. And again, these perform more like the heavier Shimano stoppers.

Last stop is the $399 retail. (they’ll very likely be selling in the mid-upper 3’s shortly)

Cost is relative for parts like this and aftermarket brakes range from near 300 bucks to roughly a grand. One man’s “that’s silly” is another man’s “I’ll take two please”…

I am “another man” in this case and don’t mind either the Red or the Black stock colors (though I would greatly prefer the QR piece be color matched black). I also don’t mind the price relative to the company they keep in the weight and looks range and especially considering the no excuses performance.