The VeloVie Vitesse 400 in all its glory.

VeloVie have been producing their stiff, solid 300r for a few years now and decided to up the ante by dropping weight, changing geometry and adding a touch of smoothness with the new Vitesse 400.

I’m thinking back to 2005 or so when a long time friend let me know that he was going to work with a partner and launch a bike brand. Shortly (in bike development and testing time at least), we had one of their first bikes off the line in their Vitesse 300. 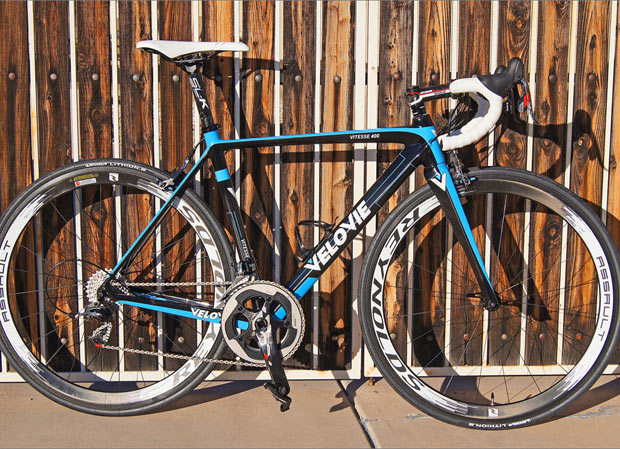 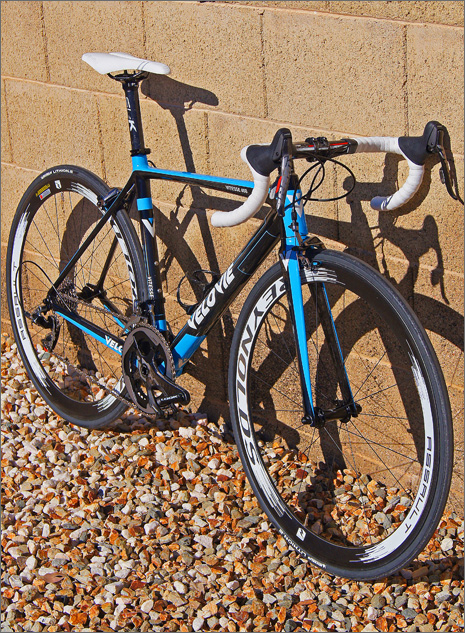 Roughly a year in development, the 400 is the logical next step for a brand that has concentrated on stiffness above all else for its past top model, the Vitesse 300 and 300r. 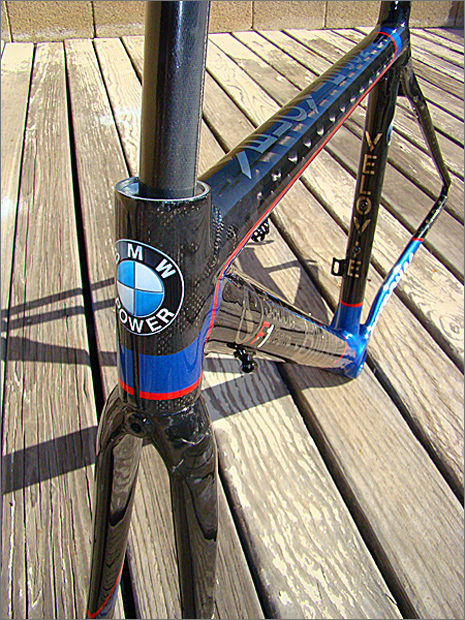 Yep, I changed the stock paint a little on this one.

That first 300 model took on a dozen or so prototype forms before the final version hit the road and VeloVie have again knocked out a few protos for this latest rig as well as updates to the TT machine. 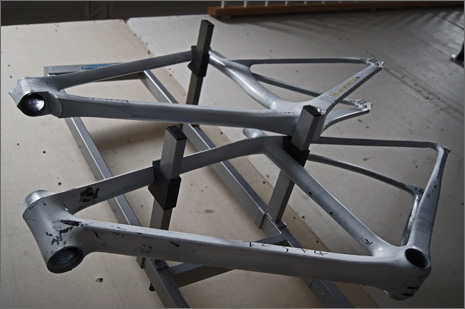 The Vitesse 400 frame is another fairly conservative shape. With the goal of maintaining stiffness and adding a bit of compliance all while cutting a few grams, there isn’t a lot of room left over for swervy curvy shaping that’s generally an aesthetic. 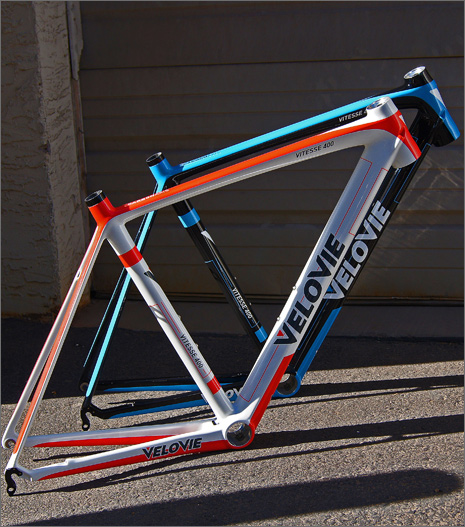 And while you can gain stiffness by blowing up the size of some sections of a frame, there is also something to be said for maintaining stiffness with wall thickness and more subtle shapes. After all, going big and thin is (generally speaking) also a bit more fragile than going for stiffness by adding a bit of wall thickness.

The Vitesse 400 is built using tube to tube tech for joints. Most think of tube to tube where the top, head, down and seat tubes are all separate parts that are first bonded together and then wrapped with a bit of carbon, but this bike is more of a “Coque-to-tube”…

The head tube and top tube are molded as a single piece. 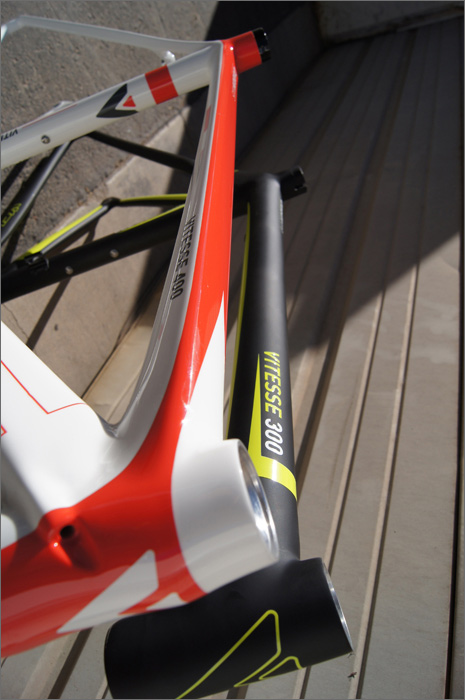 The tope tube is notably flat versus the rounder tube on the 300 and the 400 rolls with internal routing. 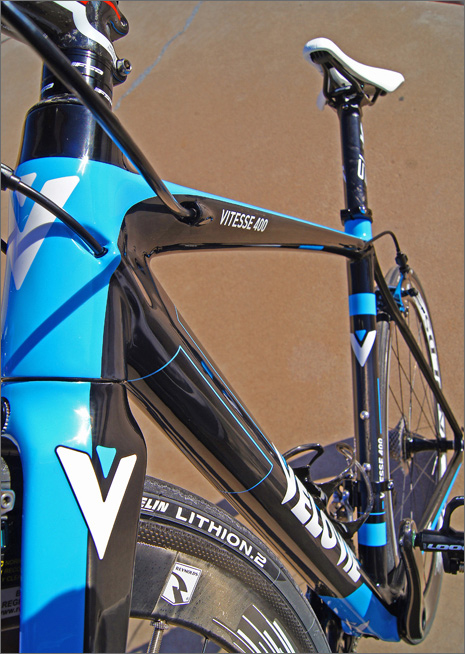 The down tube is a separate unit… 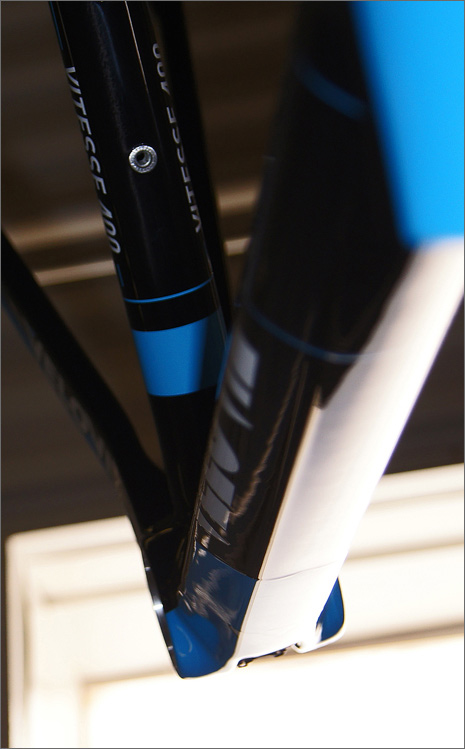 It also gets some angles… It’s a hexagon shape versus the rounder section of the 300.

The seat stays are molded together as a single unit. 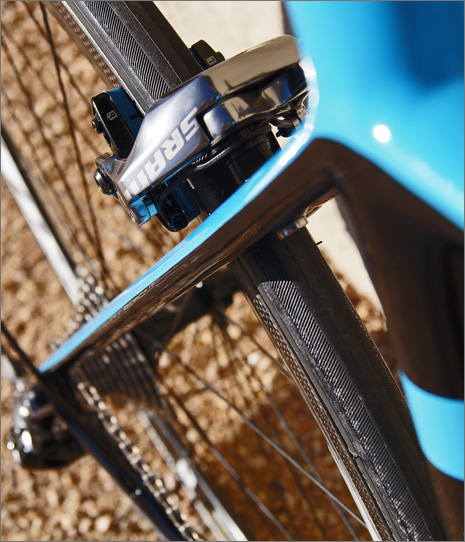 They’re bonded to the seat tube and rear drops and are very thin and straight sectioned.

The chain stays are molded as a single unit. 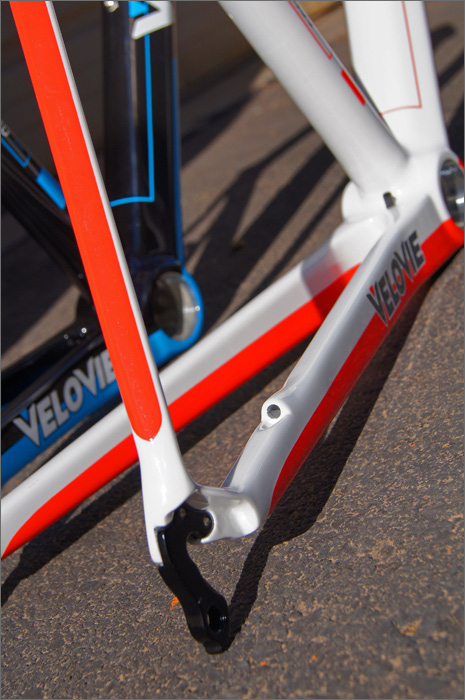 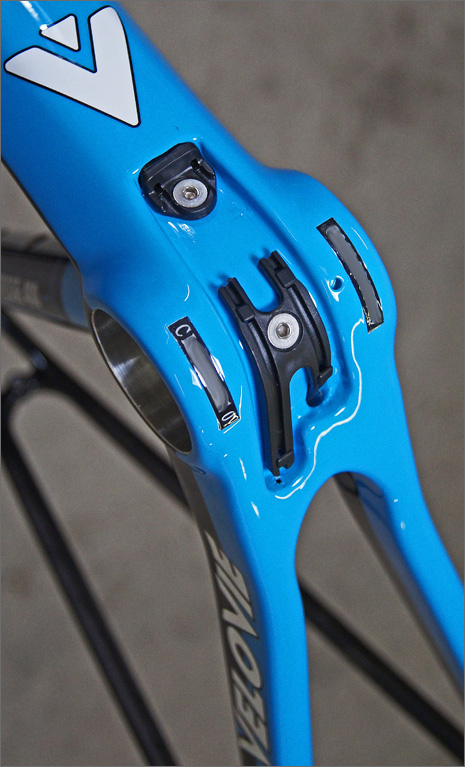 The front fork is an all new piece for VeloVie. 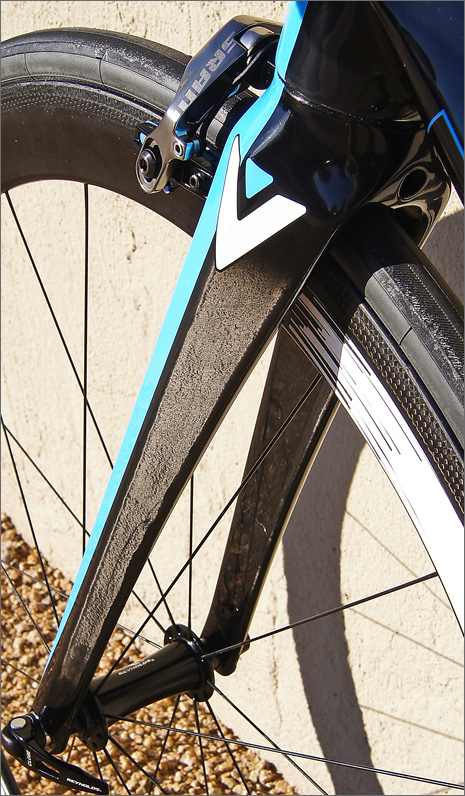 And it’s the one area on the bike that raised an eyebrow.

On the surface the drop out looks like any other… 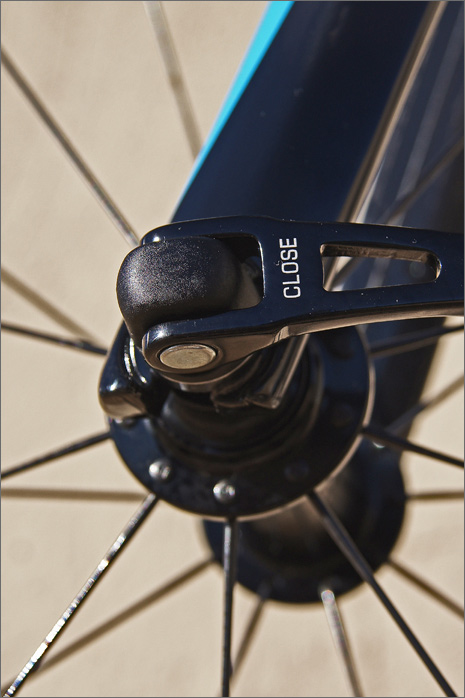 But I noted one pretty substantial issue for a “race bike” as I was removing the front wheel to pack it in the car… The safety / retention tabs are HUGE and require you to unscrew the QR and take it apart completely to get the front wheel off. 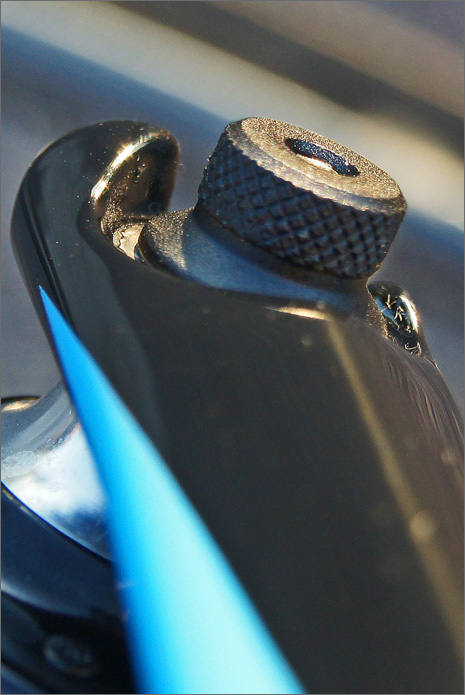 Thankfully VeloVie had already changed the design ahead of me mentioning it. I was just lucky enough to get an early run frame and fork for review.

VeloVie have also notably increased the finish level of all of their bikes. The bikes are coming out of the mold / bonding requiring less clean up in and out… 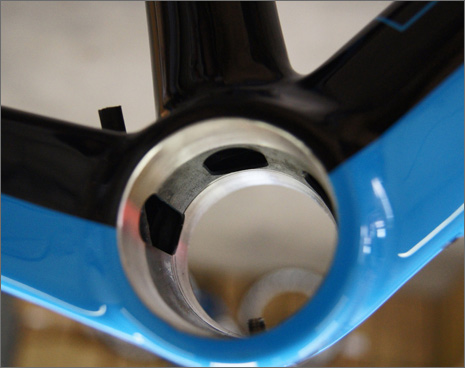 And the net unit, once prepped and painted, is a lot better finish quality back to front… 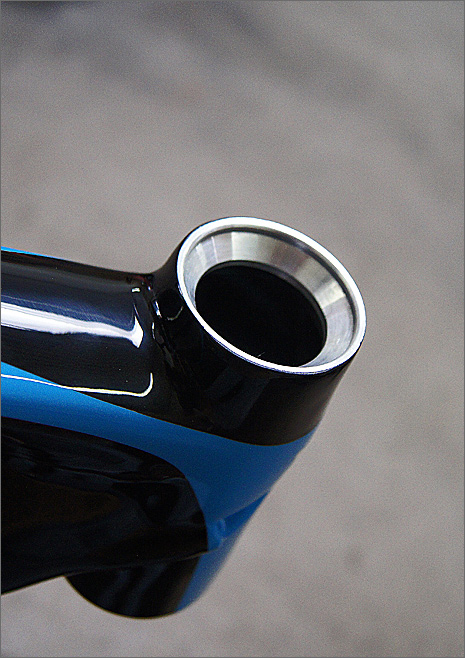 The general shapes for both the 400 and the 300 (seen below in their new glow green on matte finish) are pretty simple. 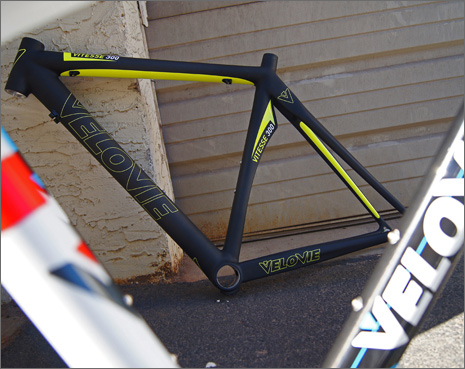 The most substantial change in the makeup of the new Vitesse 400 is selective use of 3 types of carbon. 24t, 30t and 40t are used for the 400 and while some folks assume the higher ton carbon is always “better”, it’s worth considering that there are strength / stiffness, weight and durability differences for the different carbon types that can help them tune the ride as much as change the weight.

VeloVie won’t disclose the ratio of the fiber types and where or how they are situated but the net effect was a ride quality change for the 400 versus its 300 brother.

Weight / Size / Weight?
Now that we know how the frame is put together and what it’s made of, the next question for lots of people will be the weight of the new 400 versus the 300, but that gets a bit tougher to compute given the geometry diffs between the frames.

So clearing up the size diffs, the weight for a size 51 version of the Vitesse 400 is 920 grams. The weight for the 50 and 53 versions of the Vitesse 300 are 1020 and 1040 respectively. And these are painted frame weights with rear der hangers in place rather than the bullshit numbers being posted by many companies that put the leave-offs in fine print. In fact, just for clarity, the white and red frame is another 20 grams heavier for the 400, because it takes more white paint to cover black carbon that it takes clear coat to see through. 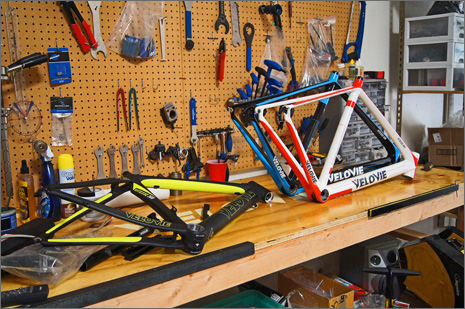 I stopped in to VV’s HQ to choose my weapon…

The size diffs don’t just relate to weight of course…

While changing stem and seat post specs can change reach and saddle setback to enable frames to fit a range of people, there are differences in wheelbase, fork rake, front-centers enough that bike-fit may determine the best choice for a few people between the 300 and 400.

Part’s Bin
Something to note about VeloVie’s build kits is that they don’t mix and match and play games with their parts. 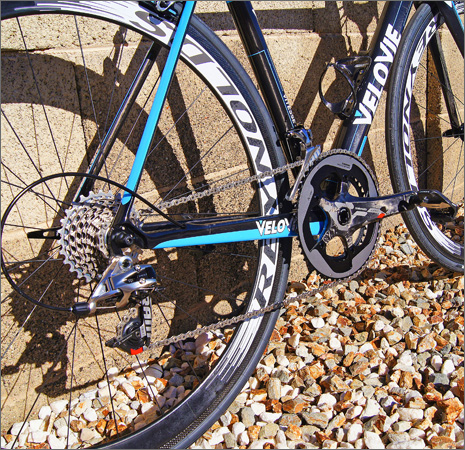 Order a SRAM Red bike and you’re getting Red front and rear mechs, shifters, cranks, brakes… You’re not getting a good price for the bike because you’re baited with up rated shifters and switched to down rated mechs or brakes.

VeloVie do offer upgrades & options to wheels, cranks and cockpit but the base parts are a full group. For this round we have the up-rated carbon blingy bits from FSA and they JUMP in the day light…

The K-Force Bar and OS 99 stem are an upper-mid stiff combo that suites this model well. 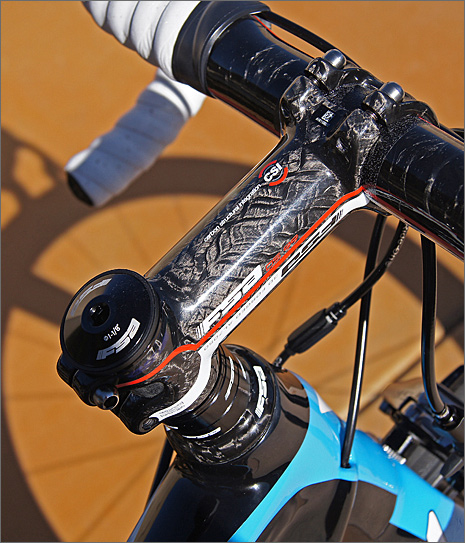 They’re by no means sloppy but they retain a little flex and damping. 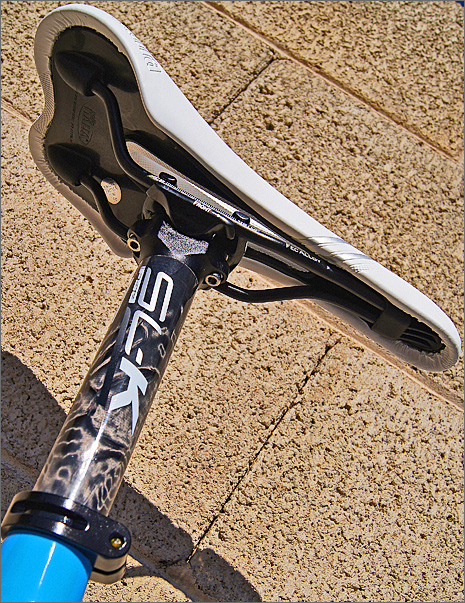 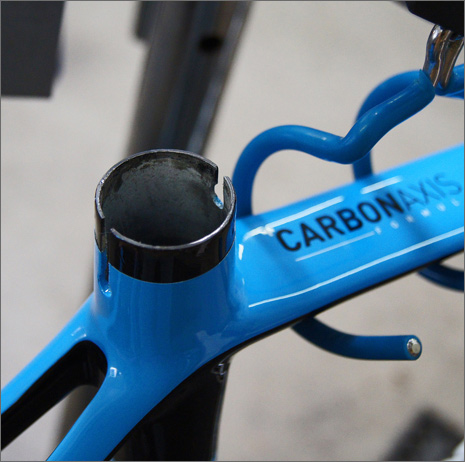 And while I swap wheels and saddle on every bike I have here for review, I actually put Selle Italia’s X1 back on the bike and gave it a go… Turns out my ass mates well and Selle Italia seem to have kept refining padding choices as this wound up suiting the sit bones. Pretty neutral shape and the cut out sits “in” the saddle a bit so that some folks that don’t like split seats might find this one OK… (SADDLE ADVICE FROM OTHER PEOPLE IS WORTHLESS BTW…)

How’s It Ride?
For me the 400 is a clear upgrade from the 300. But I would be misleading you a bit if I said it was a clearly “better” bike rather than saying it’s a “different” bike.

Sure it’s a different looking bike and the paint types are a little different, and the weight diffs are notable, but I think this comes down to geometry and carbon lay-up.

The 400 doesn’t give up any stiffness to the 300. In fact I think the 400 has just a touch better drive train stiffness with similar front end stiffness.

The 400’s focus is absolutely more tilted toward folks looking to pound the pedals and twist the bars than someone looking for a silk pillow. It stands toe to toe with the stiffest “race” bikes on offer from the larger brands, just like the 300 did.

The 400 is notably different to the 300 in its smoother ride. It still transmits larger bumps, but you get a less of that hand numbing road droning that saps your energy.

And lastly, the geometry diffs will mean that people will fit these frames a little different and that will mean slightly different handling. I found the 400’s geometry a bit more stable in turns, particularly at speed.

The handling is an interesting twist given fairly similar sizing, and it’s perhaps here (bike fit) that the closest attention be paid to choosing between 2 VERY good performance focused bikes.

Bottom Lines
VeloVie are paying attention, much like the top line brands. They’re learning that while marketing guys will scream about “Stiffness” and “Weight”, once they’ve hyped and sold a statistic, people are actually going to ride the bike.

With that in mind, the difference in carbon type and layup for the 400 have tamed the beast a bit while actually sharpening its teeth (lower weight) and claws (better stiffness). The net result is a bike with a heavy lean toward performance / stiffness, but with a bit more bearable ride.

And VeloVie are wrapping it in a price point.

They have a special (at time of writing) where you get a free upgrade from SRAM Apex to Force and the APEX starts at $2499.00.

This bike gets the face of virtually every other performance/race focused carbon in the 900 gram range at a price point for a full build that’s less than several frame-only options. And it’s from a company that’s been around a while now (along with sister company State Bicyles).

These prices for full builds rival what some people are risking for the “China direct” rejects, and seconds and open mold resprays littering Ebay and spamming forums at the moment. Yet with VeloVie you’re getting a first run product, design built for VeloVie.

Right now I don’t know of a better price point from a domestic brand.

You can read a bit more about these and order directly at VeloVie.com