A First Hand Tour of the SYSTM App

What we first knew as the Sufferfest training videos over 10 years ago, has evolved into a full suite of fitness and cycling based training plans, workouts and entertainment videos now called Wahoo SYSTM. Sufferfest founder David McQuillen took us through the new suite for a personal first look at all that SYSTM offers.

In our coverage of training aids and apps, we have seen huge leaps in terms of what is offered to those willing to embrace indoor training. From simple instruction sheets to videos of people training in a gym to the use of power meters, smart trainers, e-racing, and immersive technologies today at the kind of affordable prices Olympic coaches would have wept joyfully to have had ten years ago, progress moves on.  And with the latest iteration of The Sufferfest (now branded SYSTM by new owners Wahoo Fitness), which has held many in its cult-like grasp for more than a decade, we see all aspects of training, and a few of entertainment, addressed in expanded fashion. 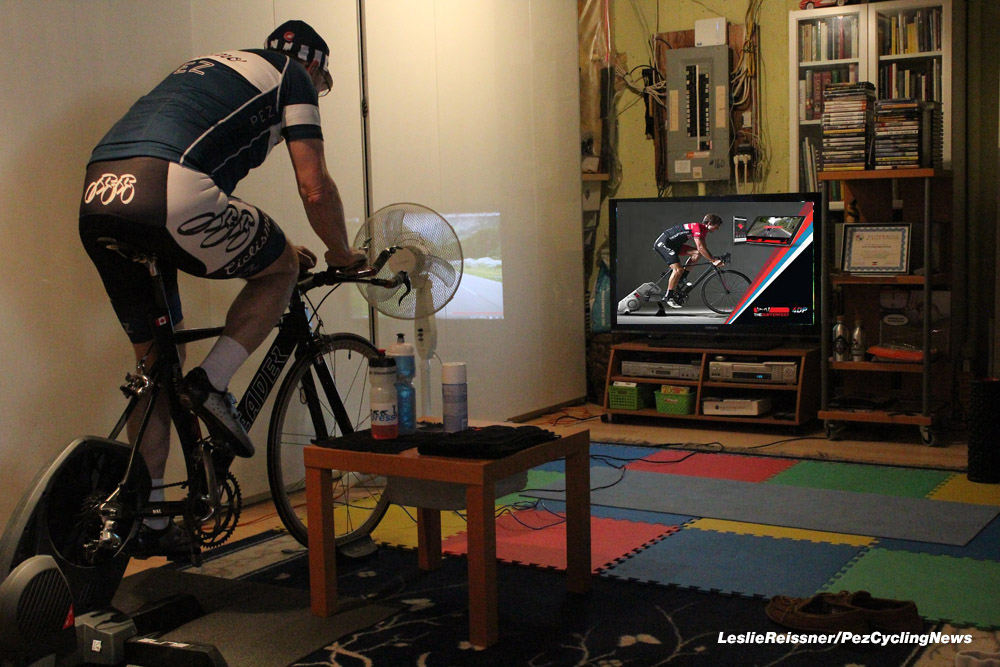 A disclaimer: I have used (and paid for) The Sufferfest pretty much since its beginning and thus have seen the changes in both the technologies used but also in the approach of the program.

In the beginning David McQuillan, an American banker living in Switzerland, was dissatisfied with what was on offer in terms of indoor training videos. He made up some of his own, using pro race footage, and was encouraged by the reaction of his cycling friends so proceeded to license UCI-level videos, added in music (mostly indy, sometimes weird), and offered downloads online.  PEZ was among the first to review and be hooked by these most unusual training videos.

The videos were not like anything seen before, described by someone as if you were riding and your drunken fratboy friends were ridiculing your efforts. And The Sufferfest was appropriately named, as some of the workouts were really brutal. For those of us starting out with heart rate monitors, the next step saw a linkage with Trainer Road, which then provided more data through the calculation of virtual power, a useful thing for those of us without power meters and in the days before smart trainers.

Events were introduced, such as Sufferlandrian National Day (“Everybody Hurts”) to the annual Tour of Sufferlandria—a very successful charity event that is the toughest stage race of an imaginary country–, to the clearly demented Knighthood of Sufferlandria goal, which required sitting on a trainer for about ten hours straight and, yes, which I have done. An active Facebook group, impressively supportive, exploded with enthusiasm. 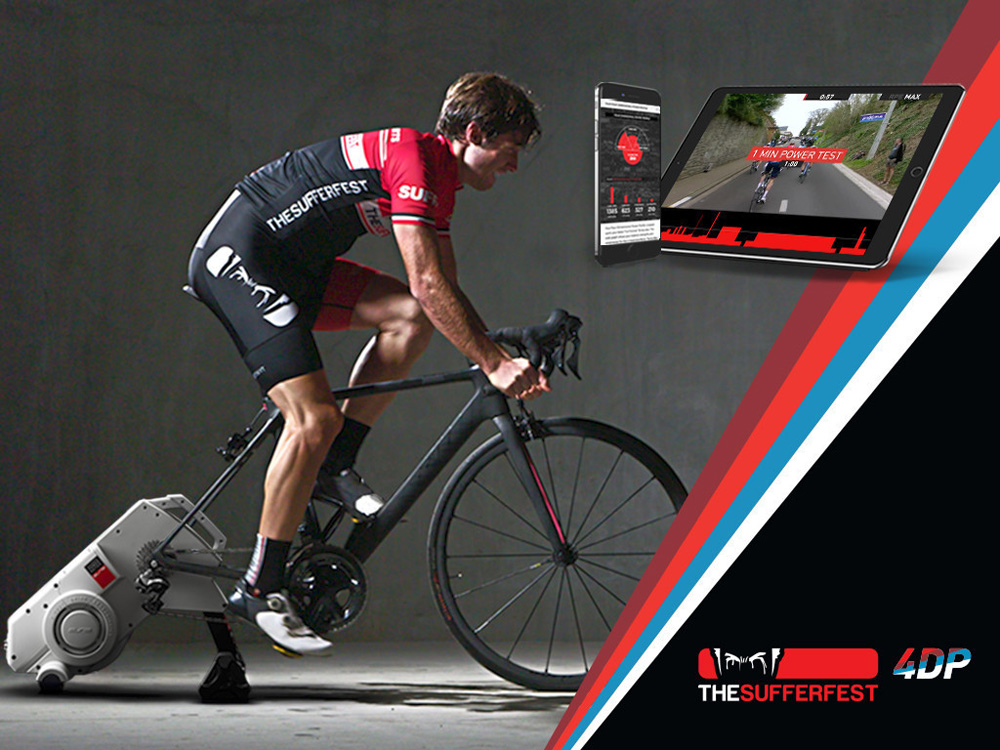 Clearly a hit, The Sufferfest then became more focused as fitness professionals were brought into the equation. There was testing, serious science-based testing. The videos had clear goals beyond hurting your legs and training plans appeared as the library of videos expanded. From downloadable (and easily pirated) videos, the next step was to online software. The cycling workouts were joined by yoga instruction, strength training, sports psychology, and even inspirational videos. In July 2019, Wahoo Fitness acquired The Sufferfest, with further plans for expansion which, with the release of the newest version, a platform named SYSTM, on September 28, 2021, has begun to roll out.

With every change, Sufferlandrians have been concerned that the program’s vibe—raucous and funny but always encouraging except for the insulting parts—would be lost or diminished. But, in my opinion, the videos improved, not only through better video resolution, sound and graphics design, but also the effectiveness of the training. The newer stories are perhaps less ridiculous but still interesting. For example, during the last Tour of Sufferlandria a new video, “Norway,” put you into a real race as if you were a pro, with the app adjusting the outputs to suit your personal numbers. Now, with the release of SYSTM, The Sufferfest has been annexed into, well, a system that is meant to be the most complete training app, covering multiple sports, available.

When entering SYSTM, you are personally addressed on the attractive home screen, which provides useful direction to the entire training environment. The story behind the program, a tour of the app, information on testing, and directions to the online community are shown. 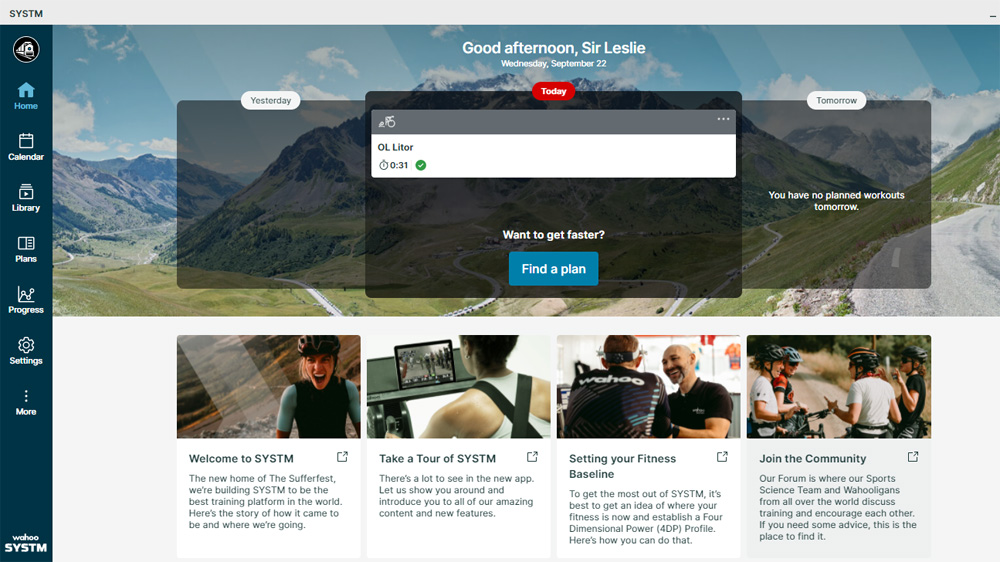 Go to the left side of the screen and there are icons for the different elements of SYSTM and the one marked “Library” is where you want go. Previously, The Sufferfest video page also housed the other sections: yoga, strength training, mental training, but now they can be found here in the library. The section marked “Cycling” gives you everything, but lower on the page (“Explore by Channel) are shortcuts to the different types of cycling videos. As well, there will be training suggestions for running and swimming. 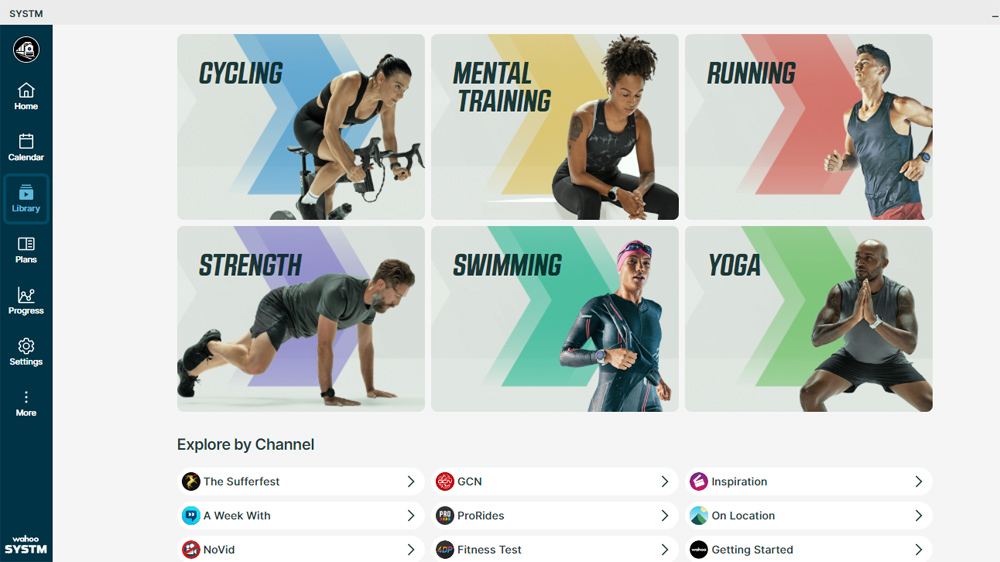 So all the previous Sufferfest videos will still be there, unchanged, with all their encouragement (as well as “We know your legs hurt. Nobody cares.”) but what are the other videos? The “Inspiration” section provides interesting documentaries about cycling, and this will be expanded from the current 30 or so to 50, with more to follow. The “Pro Ride” channel is an expansion of the idea first developed in “Norway,” pairing on board race camera footage scaled to the subscriber’s own power profile, and offers rides in Italy, Norway and the UAE. 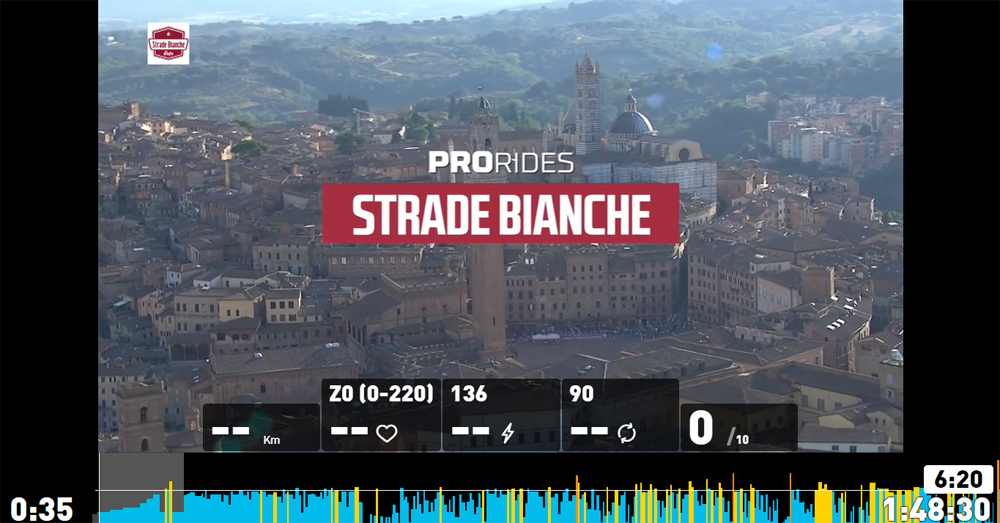 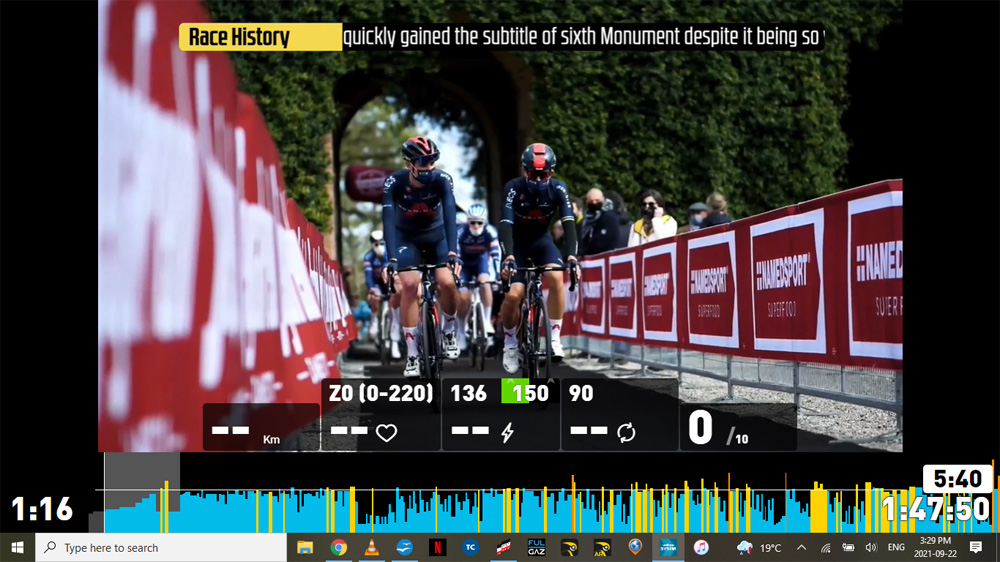 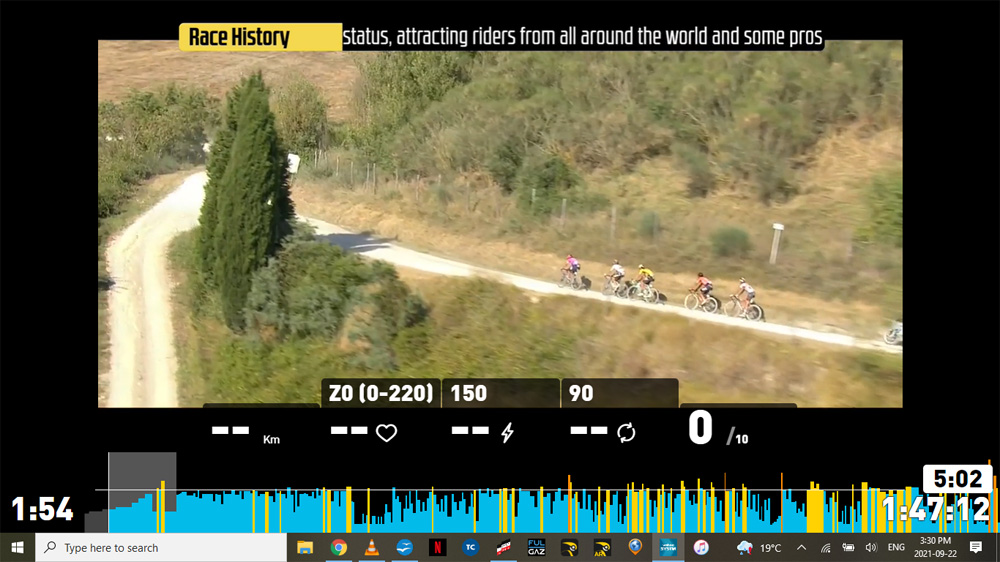 “On Location” is a series of videos hosted by the irrepressible Michael Cotty of The Col Collective in which you will be taken through beautiful scenery in Provence, the Pyrenees and the Mediterranean coast, with interesting cultural tips and historical detours. Mr. Cotty is very game—in “Cirque du Litor” he takes us to a bakery that won the prize for France’s best pain au chocolat in 2019 and later demonstrates his skill at milking a sheep. 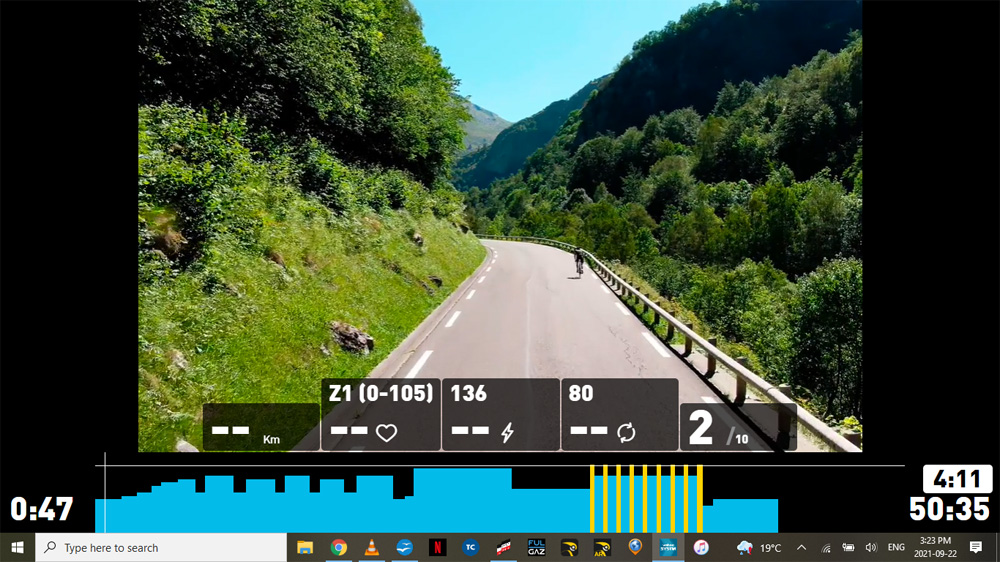 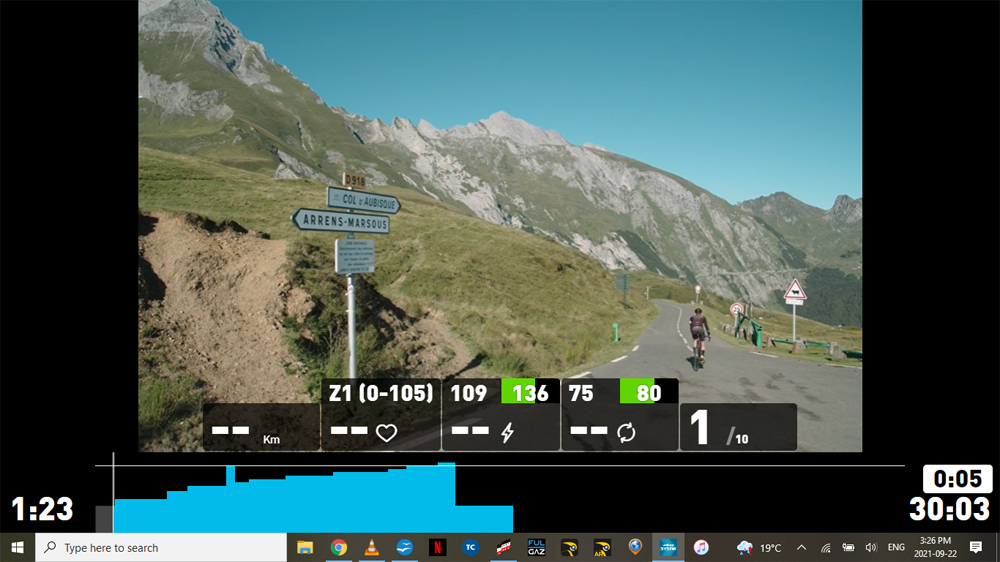 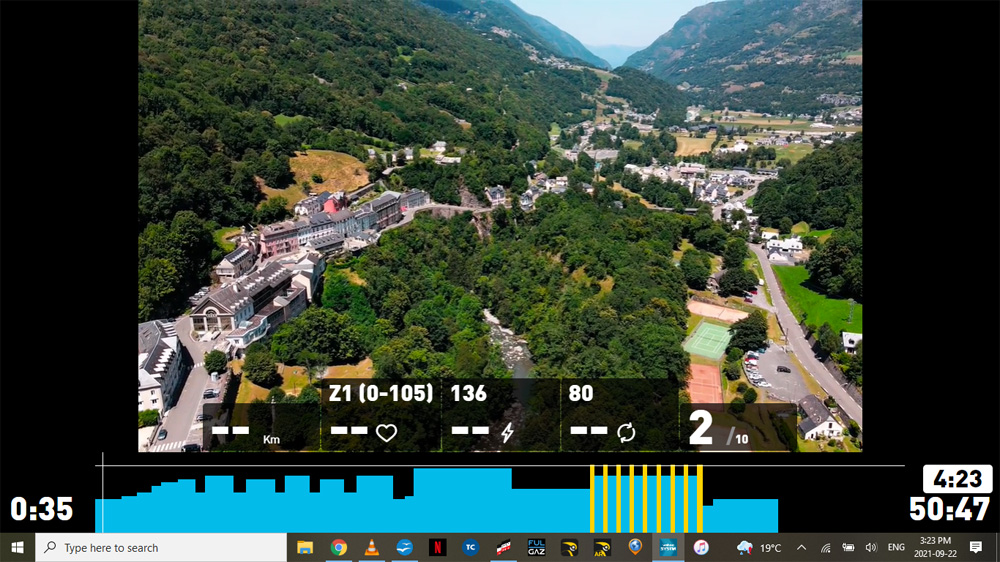 There is also a set of videos featuring “Cycling Celebreties,” so you can spend a virtual week with people such as gravel racer Ian Boswell and cycling coach Neal Henderson, plus a set of indoor training videos from GCN and also workouts that have no videos but are provide specific training. In fact all videos in the cycling library of SYSTM feature structured training, so while you watch Mike Cotty eating pain au chocolat you are putting out the watts and not just sitting on a couch.

Additional sections of SYSTM featured Abi Carver’s excellent yoga workouts, which have been augmented with new videos, along with revised strength training, which previously was generally focused but now has more specific areas covered. 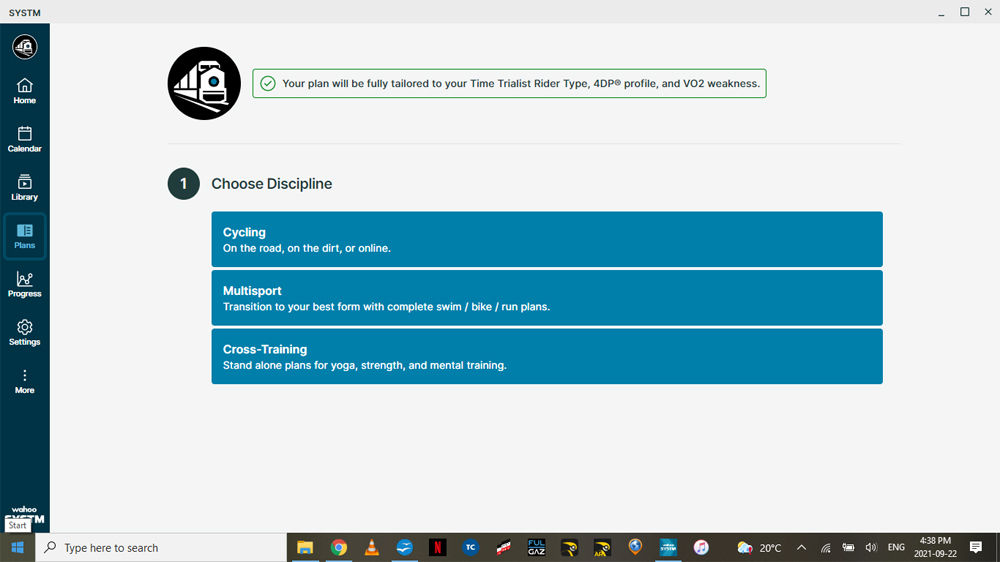 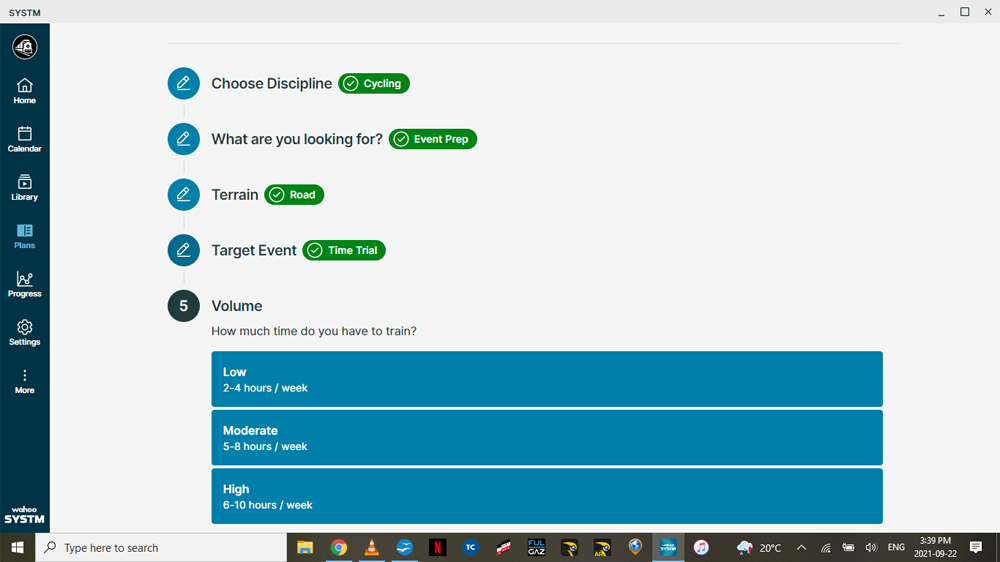 The training plan section of SYSTM allows you to drill down to get the plan most suited to whatever you want to do. Train for a specific event? Mountain biking? Time trialling? General fitness? How much time to do you have? Want to combine it with yoga or strength training? This is pretty comprehensive, with over 500 (!) variations possible, with more to come. And if that is not enough for you, Wahoo can provide personal training plans. And you even have a page showing your impressive accomplishments! 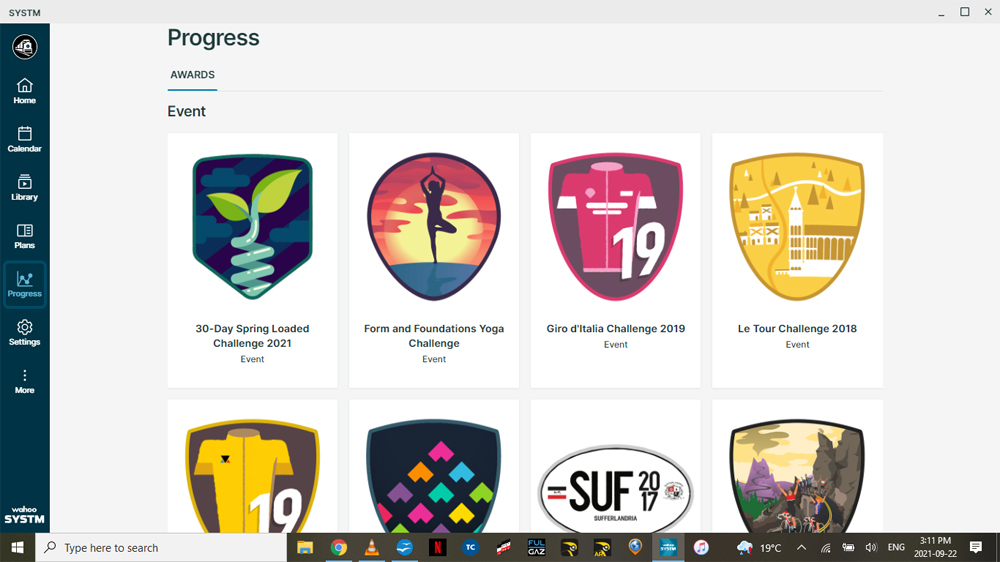 The existing Calendar from The Sufferfest has also been revised, with it now possible to load specific future workouts directly rather than only via a training plan, and there will be other changes.

In addition to all of this, there will be a podcast, The Knowledge, which will focus on very specific topics in sport science. Unlike many of the rambling and lengthy cycling advice podcasts out there now, The Knowledge will only go for around 15 minutes each time, with a single topic.

SYSTM is available for the Windows, macOS, iOS, and Android platforms, and is designed to work with connected fitness devices from most major manufacturers, allowing athletes to use the smart trainer, power meter, heart rate monitor, or cadence sensor of their choice. My own experience with technical issues with The Sufferfest was very positive and any problems were addressed quickly and professionally.

What SYSTM delivers is different from e-racing and the visuals are not computer graphics, so for those wanting to ride with (or against!) their friends, there are other apps that are more in the nature of gaming or simulation than training-focused. SYSTM represents the maturing of The Sufferfest and it is clear that it is a product of a dedicated sports science team, led by Neal Henderson, the only person to coach both male and female World Hour Record holders, Compared to riding outdoors, indoor training requires motivation and application and between the existing and much-loved/hated Sufferfest videos, the Pro Rides, the semi-tourism On Location, and the complementary workouts (yoga, strength, etc) there is enormous variety here. Coupled with focused and personalized training plans, SYSTM is very much a complete training app, attractively designed and easy to use.

The subscription cost for SYSTM remains unchanged from The Sufferfest, in spite of all the new material and upgrades. This is US$14.99/month, or US$129 annually, which is, in my opinion, a terrific bargain in an era when good bike tires are US$80 each. The traditional Sufferlandrian greeting (“Have you suffered today?–More than you.”) may not be heard as often but SYSTM is a big move forward.

For more information, go to: Wahoofitness.com/SYSTM.

PARIS-ROUBAIX’21 PEZ Preview: Who Will be King of the Cobbles?