WHEELS: A To Z With American Classic

On the second rest day of the 2016 Tour de France Ed Hood caught up with Bill and Ellen of American Classic. Ed got the full alphabet of wheels from A to Z, plus the low-down on the wheels of top ten Tour stage finisher; Dan McLay and his Fortuneo Vital Concept team.

What’s a ‘through axle?’ – Are disc rear wheels all they’re cracked up to be? – Why is tubeless the way to go?

American Classic founders Bill Shook & Ellen Kast have the answers to these and many more hoop questions.

How has PEZ come to possess such knowledge? We spent an afternoon with Bill and Ellen from American Classic on the rest day of the Tour de France, that’s how! 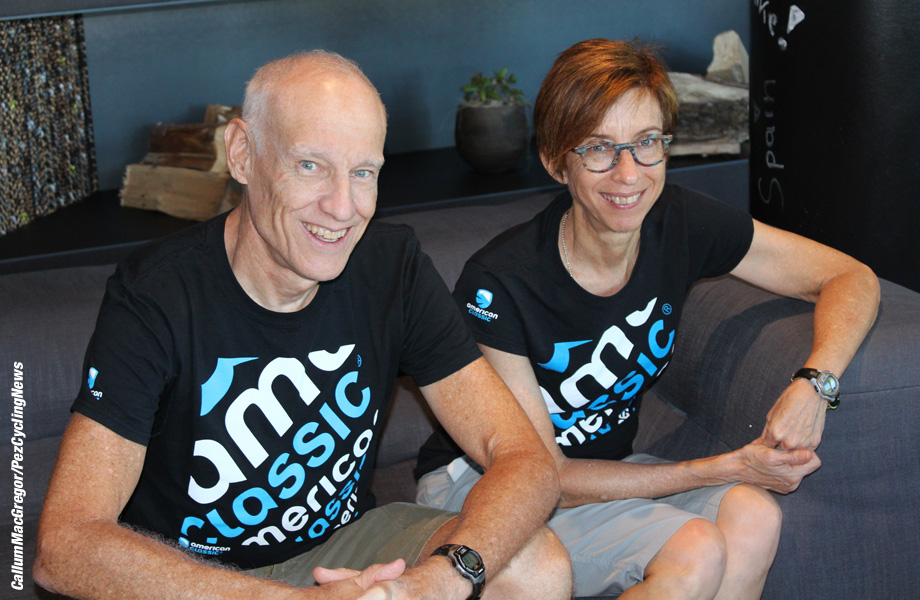 The A TO Z OF WHEELS:
Axles, as in ‘through axle’ why do we need them?
They’re the recommended method of attaching wheels to the fork ends when disc brakes are employed. They are NOT quick release though they may look like it; there’s no adjuster or skewer, what you have is a large diameter bolt (12 or 15 mil.) which runs through the hub and connects to a threaded receiver which is attached to the fork end. The fork is not slotted, so the through axle has to be totally removed to let the wheel drop out – not fun with rear wheel changes in particular.

The reason for them is that discs – unlike rim brakes – generate large torsional forces at the fork end. If a conventional quick release and fork end is employed but not clamped tightly enough then it’s possible that the braking forces may twist the wheel out of the fork end – with potentially disastrous consequences.

Bigger is better for MTB wheels – why?
The original standard for MTB was 26” – the use of that size betrays the MTB’s roots in beach cruisers and the likes. The industry ‘standard’ is 29” but many now say 27.5” is the way to go – the bigger diameter wheels smooth out bumps which a 26” wheel would ‘drop into.’ 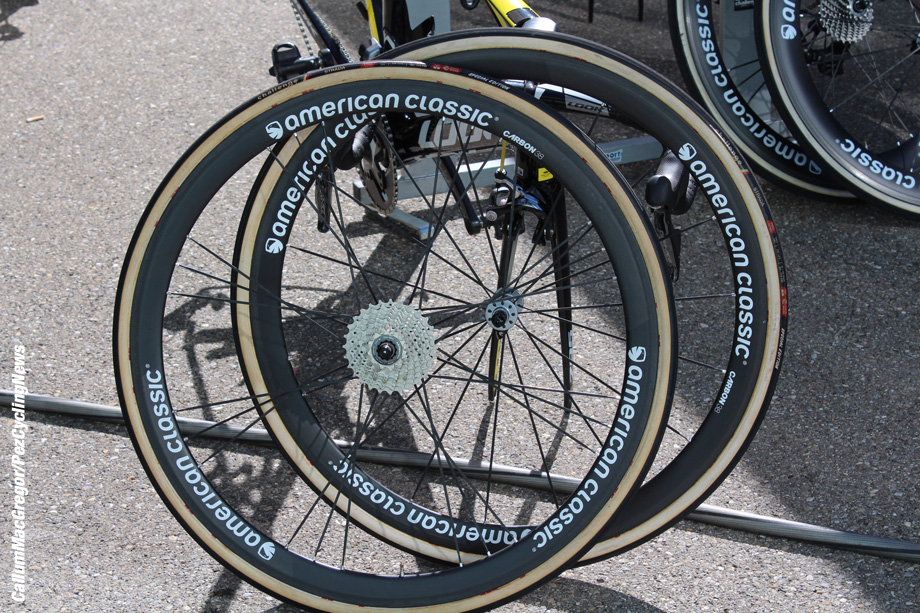 Clinchers are the way to go – why?
They’re lighter and more responsive than they’ve ever been; and you can change a tube easier – and even repair said tube – than you can change a tubular. And it’s a lot safer that trying to get a ‘tub’ – or should that be ‘sew up’ for those of us in North America? – to stick to wet a rim if you have the misfortune to puncture in heavy rain.

The BUT is if you have a sudden deflation with a clincher – ‘wired ons’ we call them in the UK – then the rim contacts the tar and you’re DOWN – unless you go tubeless. But more on that later.

Disc brakes – why?
They’re more controllable, there’s much less delay in stopping and you get much better feedback through the levers – they’re not just ‘on’ or ‘off’ especially in wet/dusty conditions. 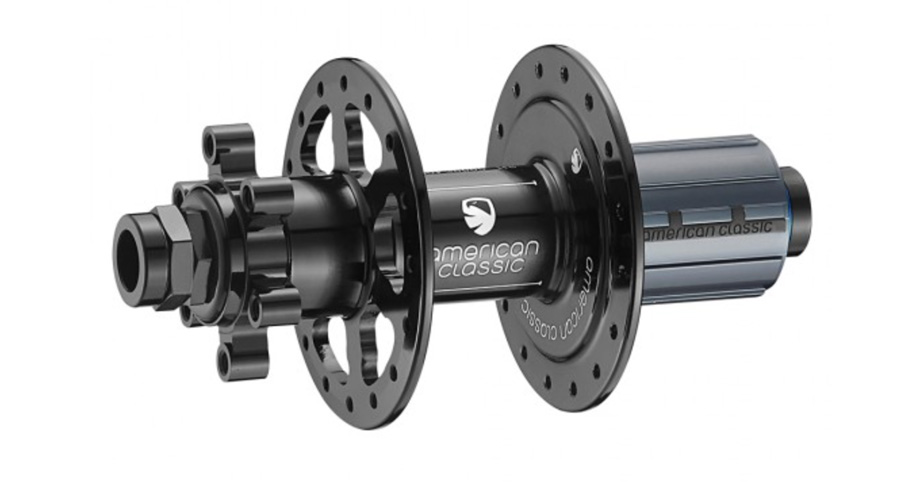 Disc rear wheels in time trials are always the answer in time trials aren’t they?
They are according to the wind tunnel, yes – but in real life, not necessarily. What a wind tunnel does not take into consideration is the constant balance corrections the rider has to make when faced with difficult wind conditions – not just to the steering but with thigh, hip and back muscles.

There’s also the aspect of lost energy through tyre scuff. Particularly if you’re a small rider perhaps you should think about an aero rimmed rear rather than a disc if it’s a windy day?

Energy: Every time you have to correct the steering, shift in the saddle, lean to catch your balance, it uses energy.
Wind tunnels are fine if you’re Chris Boardman researching for the track; but they don’t tell the whole story on exposed, windy, hilly, gnarly Macadam or concrete.

Fixie Culture: is American Classic looking to find a way in to that market?
The Fixie World has discovered American Classic – their rims and wheels show up regularly in ‘Alley Cat’ races and Red Hook fixed wheel criteriums. In cycling landscape where the average age of participants continues to creep up, this is one area where youth rules the roost and keeps things fresh.

Grab: Is what you get with carbon rims if you’re braking in the wet; the first few revolutions of the wheel clear the water from the rim then brakes are ON all of a sudden – you do not get this effect with disc brakes.

Heat: Isn’t all that heat which disc brakes generate dangerous – what about Fran Ventoso’s injury?
Some might say that the UCI ban on discs for competition was ‘knee jerk’ particularly given that some argue the former Spanish Champion and Philly winner’s injuries to his knee were caused by a chainring.

Meanwhile ‘testing’ goes on; that’s professionals training on them to establish the pros and cons before we see them again in the peloton. And then we just have to agree on rotor size and through axle diameter.

‘Just how it’s always been:’ Is a malaise common in the peloton, whether it comes to diet, training or the use of clinchers/tubeless tires/disc brakes – tradition is strong in the long established French, Italian and Spanish teams and change can be slow in coming. 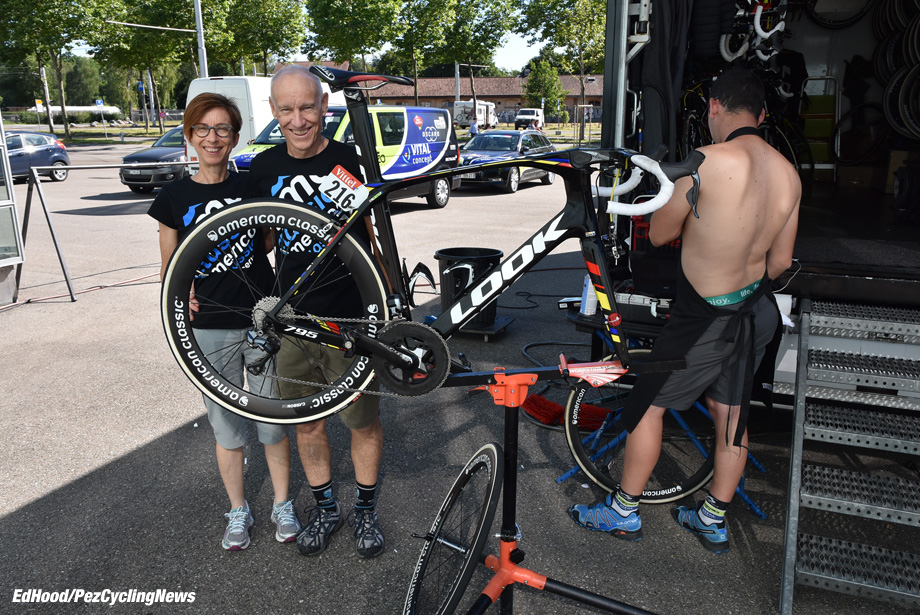 King of Vegas: An ‘Alley Cat’ in the home of ‘Bling,’ Las Vegas with American Classic rims and wheels much in evidence – those dudes are down with the kids.

Light weight: Want light, fast, value for money road wheels?
Think aluminum for rims and hubs; you’ll still see many ‘old school’ wheels at Het Nieuwsblad, de Ronde and all the other cobbled races in the spring – that’s because they do the job.

Magnesium: American Classic are at the forefront with this wonder metal for wheel but supply problems slowed things down.
They’re ‘getting there’ though; it is the future – so watch this space.

New Sponsor: American Classic sponsored the Professional Continental Bretagne Seche last season, this season the team races as Fortuneo Vital Concept – how are things with the new sponsors?
‘Those guys are cycling fanatics and there’s a great atmosphere in the team – there are no Divas, just a big family.’ 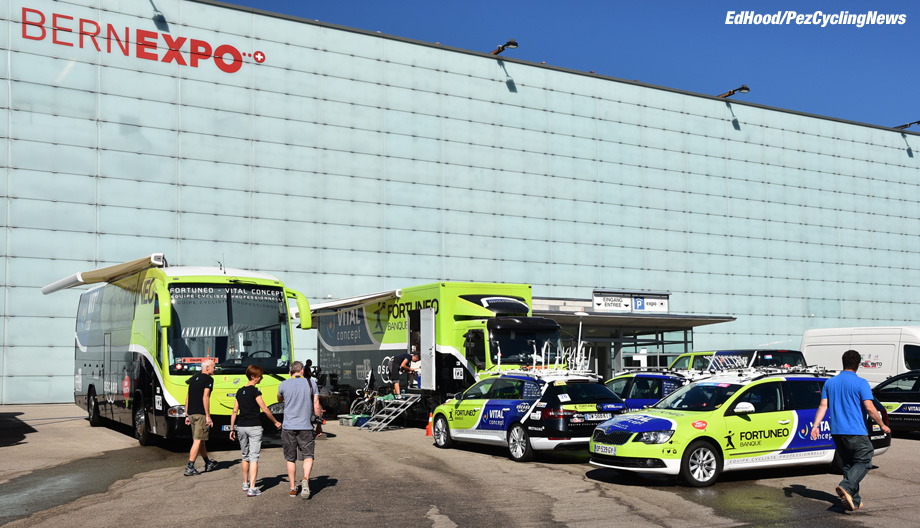 Outlawed: rear discs are banned on safety grounds from the Ironman Triathlon because riders were blown off their bikes in the cross winds.

Pinch flats: we used to call them ‘snake bites’ – forget them if you go tubeless, Dude.

Quick release: the eccentric cam quick release skewer has been around a long time – I’ve had them on my bikes for 40-odd years with ne’er a problem. ‘If it ain’t broke don’t fix it.’ But wave them goodbye if you go down the disc brake road, ‘through’ (or is it ‘thru’?) axles become the norm – once the standard is agreed that is, 12 or 15 mm?

Rim brakes: we mentioned ‘grab’ earlier but that’s on carbon rims; aluminum rims have served professional bicycle racers well for decades – but I mean, who wants aluminum? Even though it’s cheaper, lighter and safer as a braking surface in the wet? 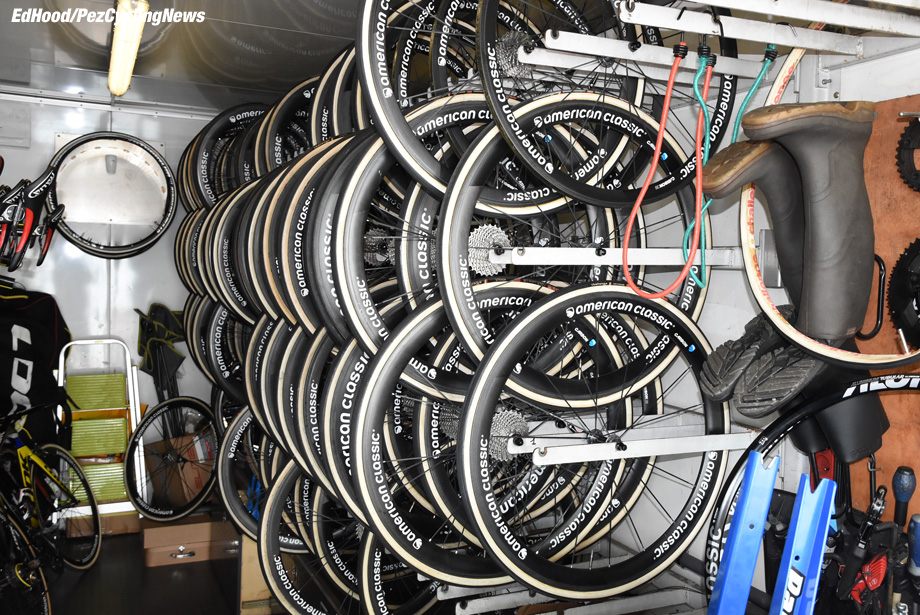 Spokes: some manufacturers claim that five spoke carbon is the way to go on the front – so how come in the recent Tour long time trial just about everybody rode a conventionally spoked front wheel?
Because wind tunnels are one thing, the open road is another.

Tubeless clinchers: you can say ‘goodbye’ to pinch flats; you can run them with self sealing compound so you won’t even know you’ve punctured; there’s no friction between the tyre and inner tube, saving you that energy stuff and if you do lose pressure – which would take a big rupture of the tyre – then the bead will keep the tyre in place on the rim until you can stop, not like a conventional clincher where the rim contacts the tar and you’re on the deck.

I’ll certainly be fitting a pair to the Giant.

Guess I’ll need to restore the Klein to original trim so as it classes as a ‘Classic’ then? 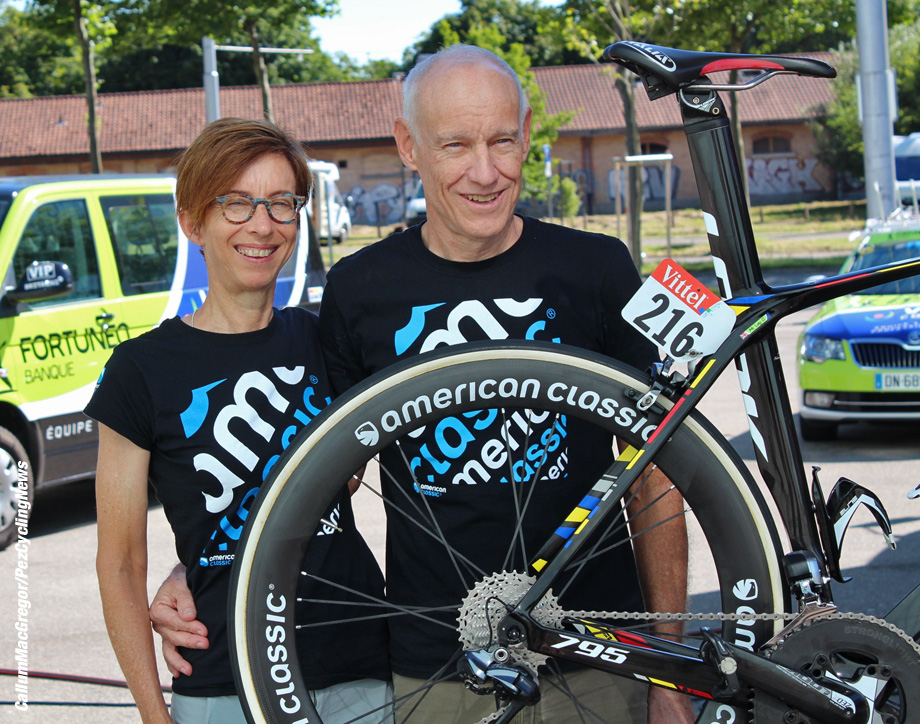 Width: tyre width is increasing – why?
Wider tires are more comfortable, there’s less flex in the carcass (even better if tubeless) traction improves and you can run a lower pressure for better grip. The downside, they’re less aero – but that makes little difference in a six corners per lap criterium.

X winds: Every time you ‘correct’ in a cross wind, the wheel turns but the tyre doesn’t – every one of those ‘scuffs’ is energy wasted. Don’t just accept all the ‘wind tunnel tests say’ stuff.

Youth: The novice and junior fields may still be huge in Belgium but in the UK and US it’s a worrying trend that they’re not – and look at any sportive or fondo, youth is not in evidence. So before you criticize fixies, messengers and single speed guys remember that they just could be our future crit and track stars.

Z: Well, we got there in the end – if there’s anything else you’d like to know about American Classic hubs, rims and wheelsets then check out their excellent website, where you can also buy their wheels directly: AMCLASSIC.com/ 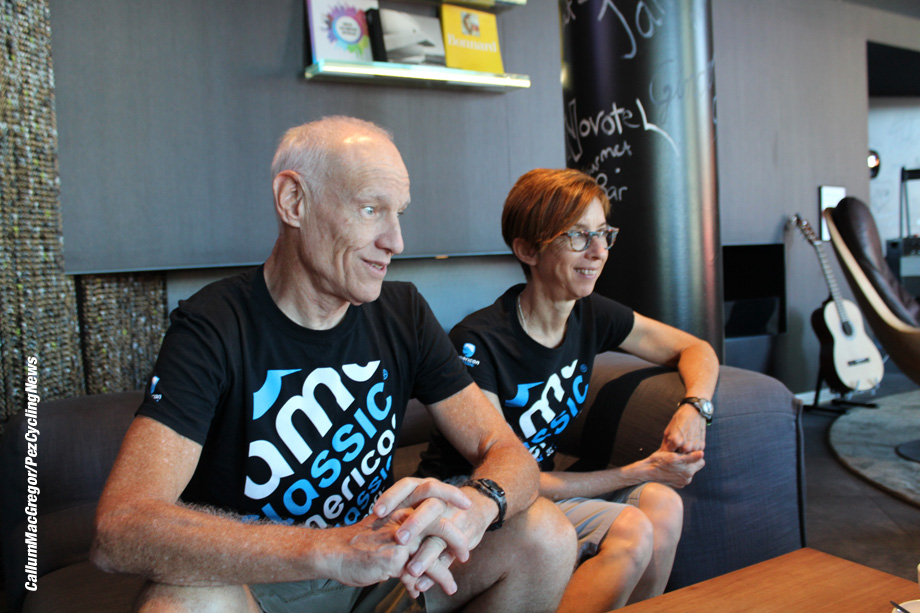 Note: PezCyclingNews and the author ask that you contact the manufacturers before using any products you see here. Only the manufacturer can provide accurate and complete information on proper / safe use, handling, maintenance and or installation of products as well as any conditional information or product limitations.