This bike was so hot at Interbike, you almost needed oven mitts just to touch it. Seriously, ORBEA is one of the hottest lines of racing bikes in the US this year, and we’re about to tell you why… Feeling as lucky as we are giddy – here’s the world’s first review on the new ORBEA ORCA!

Orbea Who?
Orbea is one of the largest bike manufacturers in the world, but for a lot of us, the name is relatively unknown. It’s time we got introduced! 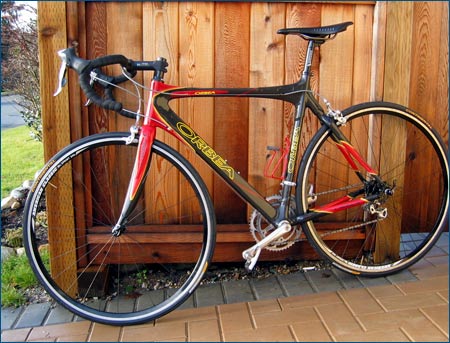 The company name has roots that extend back to 1840, when the Senor Orbeas owned a factory that made guns & ammo. They got into bicycles when the demand for weapons was replaced by the growing need for inexpensive transportation – and bicycles are made from round barrels of steel welded together – so it was a no-brainer for the family business.

Today, Orbea makes about 400,000 units each year, selling a huge chunk of these in Spain, Portugal and France. I first became aware of Orbea as the bike ridden by the Euskaltel-Euskadi team, but learned that their pro sponsorships are also a business decision to gain exposure in new markets like the USA (they’re also the official bike of Team Jelly Belly). In 2004 look for an Orca under Iban Mayo, and a few select members of the Jelly Belly squad. 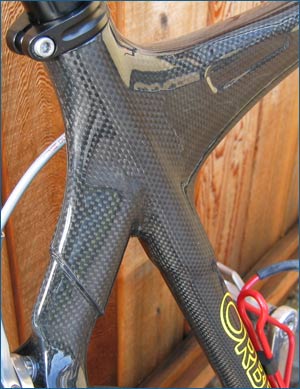 Which Brings Us to the ORCA.
New for 2004, it’s Orbea’s top-line full carbon frame-fork racing bike. At Interbike last October, The Orbea booth was packed from morning till night, such was the industry excitement over the new line. And if the Orca is an indicator, this line will rock. Actually, it’s already rocking, as Orbea’s US sales orders are way higher than expected for ’04. 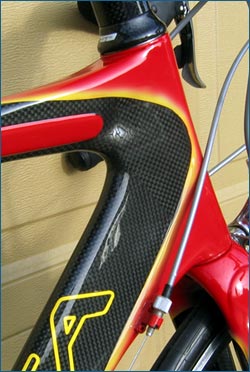 The first thing you notice is the super-striking graphics. Maybe it’s their hot-latin blood, but those Basques sure know how to pick colors – their catalogue is full of strong, bold and very colorful paint schemes. The Orca comes in 4 color schemes – black/silver, Euskaltel orange, carbon/blue/white, and the official Jelly Belly colors of carbon/orange/yellow. All the graphics are painted and finished by hand, and the detail is very nice indeedy. These are truly some eye-catching colors.

First impressions are important, but you really need to look deeper – get below the skin to find out what a bike is made of. In this case, the Orbea guys have designed a rolling work of art. The frame is 100% carbon fiber, including the main joints for top, down, and seat tubes. The front triangle is one piece, while the seat stays are bonded and replaceable. (The Orbea guys believe one nasty fall shouldn’t deprive you of your whole bike.) The only aluminum in the frame is the headset cups, bb threads, and dropouts (also replaceable). 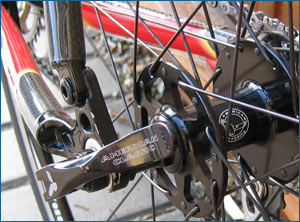 On first glance you might think the frame was designed with some aero-cheating in mind, but in fact the larger tubes and shape of the carbon was led by the desire to build a super stiff racing bike. Which is exactly what this bike is. The Basque country is all hills and mountains, (no wonder they breed climbers over there) and this bike is true to its regional heritage – so building a racing bike that was not about climbing was simply never an option. Regardless – it looks aero and that’s cool.

It comes in only 5 sizes, with geometry that is a degree or two slacker than some “steep” bikes, but this allows seatpost and stem lengths to fit it up fairly well. It’s more stiff than comfortable, but not uncomfortable at all (probably down to the laid back geometry forcing vibration through the material).

The test bike we got was so new it didn’t have the full OEM spec, but since the top line ORBEAs are essentially custom-builds as per buyers’ specs, let’s say we spec’d this one our way. Notable sweet stuff included American Classic 350 wheels, skewers, seatpost (you already know what we think of this gear!), Fizik Arione saddle, Continental Attack tires, and Shimano 9-speed Ultegra drive train and controls. Nice stuff all around. 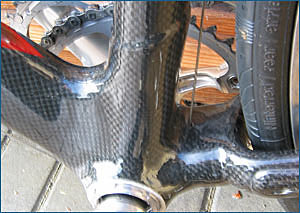 Andale! Andale!
Riding this bike is fun, especially when the terrain goes up. The whole package has a nice tight feel to it – whether you’re climbing, descending, sprinting or cruising. My first ride took in some local climbs gaining about 200 meters on some steep twisting roads. This is my kind of terrain, so I settle in, grab the bar tops, and let my legs – and the bike – do the rest. Every turn of the pedals is a step on the gas – the bike just wants to go faster! There’s simply none of that of “lost momentum-mushiness” you get of some bikes with longer wheel bases or slacker geometry.

Same when you stand up – ! The climb gets steeper, you climb out of the saddle, and bam – you’re Iban Mayo on Alpe d’Huez.

And what goes up must come down, and this bike just begs for those 25km Alpine descents… Again, the frame construction and geometry are right on for F1 handling at speed. Sure it’s a little more responsive than some designs, but you immediately know this bike will go where you point it. In fact you just have to think where to turn and the bike goes there.

These days, the Basque region is home to some of the fiercest cyclists on the planet – it’s in fact home to 70 licensed pros. It’s no surprise that the Basque people put their fiery blood into cycling in a big way, and came up with the ORBEA Orca – a bike with a proud heritage that’s not afraid to take on any challenger. I suspect that should one offend a Basque Orca rider, the challenge will not be dueling swords or pistols at dawn – no. It’ll be a Pyrenean climb at noon – in the heat of the day.

Get more info at the Orca USA website :
www.ORBEA-USA.com
– and tell ‘em PEZ sent ya!
Like PEZ? Why not subscribe to our weekly newsletter to receive updates and reminders on what's cool in road cycling?