Worlds06 EliteTT: The Men And Their Machines

PEZ’s Ed Hood got in the pits to have a closer look at yesterday’s Elite TT podium finishers’ bikes. You know the bikes, you’ve seen them in pictures, but now get a little closer to both the riders and their time trial rockets.

It was a day of surprises in the 2006 world elite time trial championship, Cancellara’s win was no shock; PEZ-pundit Magnus Backstedt (Sweden & Liquigas) had the big, handsome Swiss with the mop of black hair down for the win last week. His winning margin was a surprise though; 90 seconds over CSC team mate David Zabriskie on a very lumpy course, hardly ideal territory for a man of Cancellara’s burly build. 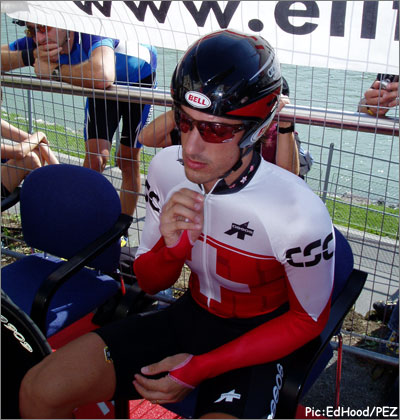 Fabian Cancellara enjoys a quiet moment before he gets to doing hard things like pedal.

Davie Zee’s ride was in itself surprising given that earlier in the month he had been run to just 32 seconds in the US time trial championships by Toyota United’s Chris Baldwin. 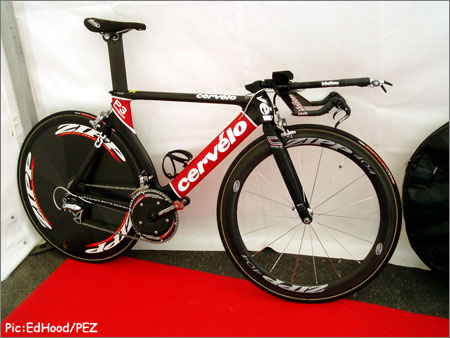 An interesting tidbit on Dave Z’s bike: he doesn’t use bar tape on his aero-bars, but rather, sandpaper. Yeah…

The Toyota man’s time included an excursion on to the tar so it was a lucky Zee who pulled-on the US champs jersey that day. Baldwin finished a lowly 26th in Salzburg, 4-42 down on Cancellara and three minutes plus down on Zabriskie. 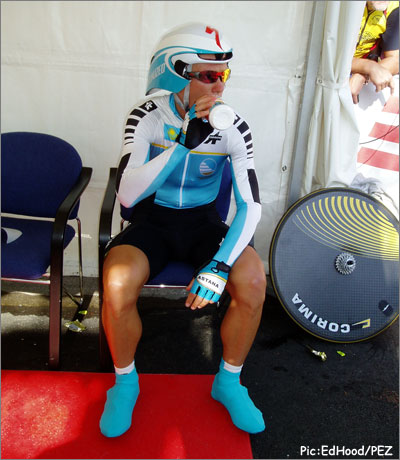 Third place went to Vuelta victor, Alexandre Vinokourov who snatched the bronze at the eleventh hour from another surprise – Denmark’s Brian Vandborg. The Dane, a protйgй of countryman Bjarne Riis at CSC was seeded a lowly 43rd and it was only the real the big-guns who could blast him off the podium. Three out of the top four speaks volumes for the CSC approach to time testing. 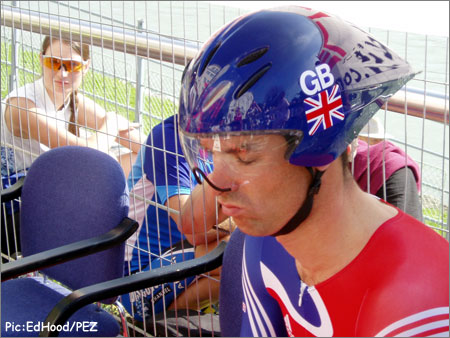 David Millar looks slightly concerned before his start – perhaps he knew that he’d left his best legs in Espana.

Vino’s ride was best of the Vuelta survivors; David Millar (Scotland & Saunier) was a lowly 15th displaying nothing like the form that he did to win a TT stage in the Spain. Pez diarist Dario Cioni (Italy & Liquigas) said immediately after Millar’s Iberian success that if the Scotsman was serious about the podium in Salzburg he should quit the Vuelta with a week to go in order to rest properly. No doubt Millar had his own reasons for going all the way to Madrid, but Fabian Cancellara must have read Pez news that day and packed his bag with a week to go. 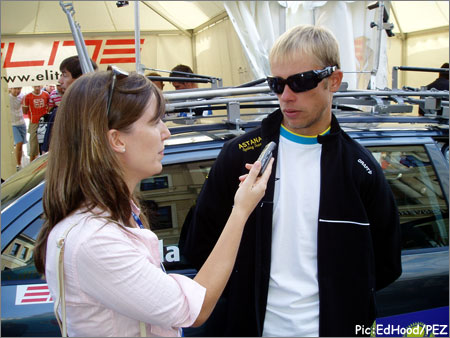 Andrey Kashechkin was yet another of the Vuelta victims – only Vino managed a quality performance in the TT out of the Vuelta finishers.

Big Hungarian ‘chrono-man’ Laszlo Bodrogi was another man who went the distance in Spain and produced a fine ride in the last TT in the Vuelta but was an out of touch 19th here. 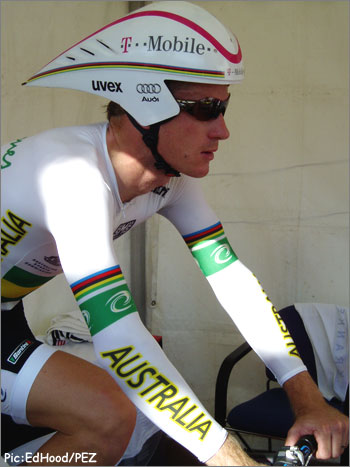 Michael Rogers’ string of three straight came to an end on Thursday, last year’s 2nd place, Cancellara, got the better of him this time, along with a few other people.

The eighth place of defending champion Michael Rogers (Australia & T-Mobile) was surprising to many, but it has to be said that the fields he has defeated in recent years have not been as strong as this one. Furthermore his chrono palmares are very thin apart from his world titles. Andreas Kloden was another ‘capo’ who didn’t live up to star-billing, flopping to 27th at 4-42. World ‘athlete’s hour’ record-holder Ondrej Sosenka (Czech & Acqua Sapone) was a distant 32nd but the course was totally unsuited to his giant build. 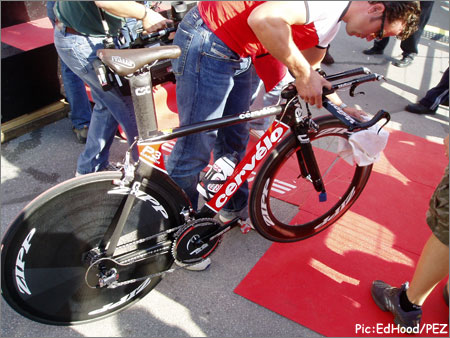 Fabian Cancellara’s time trial rocket gets one last rub-down before hitting the road. Notice the brake on the right aero-bar.

If there were surprises amongst the riders there were none in the hardware store. Cancellara and Zabriskie rode their usual Cervelo P3 carbon time trial mounts. It’s easy to get blasй about these machines when you have seen them at all the big races, but when you stand back and take a look with fresh eyes, they really are radical. The rear wheel tucks right in to the curved seat tube and the seat pillar is more or less vertical, sitting the rider over the drive train whilst the front end is elongated to allow a stretched, aero position. Both riders used Zipp rear discs and 16 spoke, deep section carbon fronts.

Talking of discs, all the medallists used FSA 54 tooth solid chain rings, another trick to keep the air-flow ‘clean.’ FSA rule the roost too in the tri-bar stakes; Vino’s BH displayed a sleeker version of their ‘Vision’ set-up than the CSC guys bikes but all were complete with those beautifully tiny and aero brake levers. Shimano supplied the derailleur mechanisms and brakes for CSC with the gears activated by bar-end shifters. 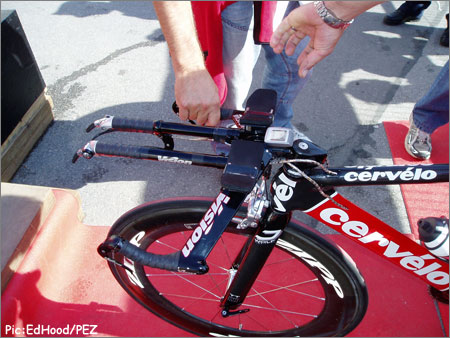 Cancellara’s velo displayed a third brake lever on the tri-bar extensions to allow light braking without coming out of the tuck; Davie Zee’s bike didn’t have this feature though. To handle the tortuous cable routes demanded by low-pro designs, CSC employ Nokon ‘bead’ outer cabling. The CSC back sides sit on ‘chopped’ Selle Italia saddles, the hatchet-work necessary to keep within those pesky UCI rules on position. 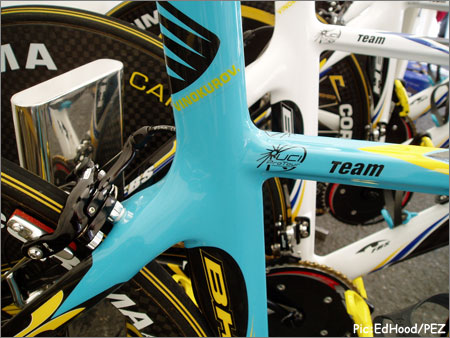 Vino’s baby-blue carbon BH looks awful like a Giant to me, complete with fly-thru seat tube. The Astana bikes are beautifully prepared – a legacy from the Manolo Saiz days, a perfectionist when it came to equipment, whatever-else you can say about him. Oval ‘bi-plane’ forks are employed and whilst most teams who fit these do so in their original black carbon finish, on the BH machines they are sprayed to match the frame and look great. 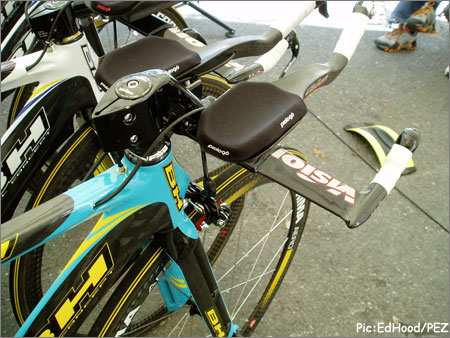 Vinokourov was sporting some sweet aerobars that both Cancellara and Zabriskie apparently either didn’t want or don’t have – most likely didn’t want.

Vino ran Corima wheels; a disc at the rear and a tri-spoke up-front. Campag supplied the gear mechs but brakes carried the FSA logo; strangely there were no Nokon cables for Vino although team mate Kashechkin’s bike displayed them. The Vino rump squatted on a savage-looking San Marco saddle – maybe that’s the secret; make it so uncomfortable you can’t wait to get off the damn bike? 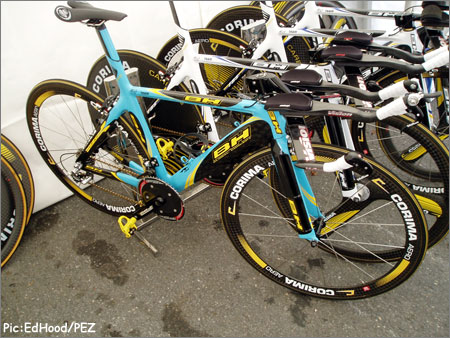 That’s a nice, hard saddle to keep you comfortable in moments of desperate hardship.