A favorite gift in the CheapOh household is the homemade coupon. It usually ends up being a more cherished gift than the store bought variety. This year for Christmas, give your cycling buddies a free Wrapped Handlebar Coupon. The trick is to make it the best wrapped handlebar they’ve ever had. Here’s how you’ll do it. 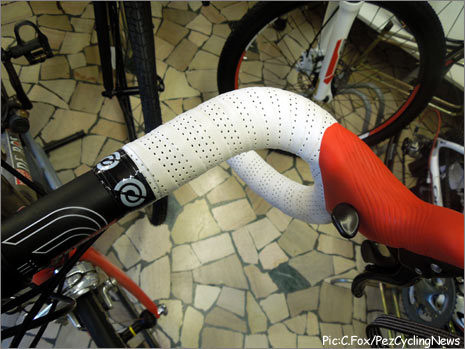 These are perfectly wrapped bars and they make for the perfect CheapOh gift.

The flawlessly wrapped handlebar is the cherry on a sweet ride. It can even turn an average rig into something respectable. Likewise, poorly applied bartape is a crime against all bikes! Immaculately wrapped bars are THAT important. The reason why many handlebars are done crappily is that a great, not merely good, but great tape job, done by an expert, is a 30 minute commitment. For the beginner, figure almost an hour. So this little CheapOh gift of yours should not be given lightly. Although there’s plenty of information around about wrapping handlebars, this way is a damn fine way.

Which Tape?
Let’s make this easy: the best bartape out there is Fi’zi:k’s Microtex in either white or black. That’s it. There are certain special circumstances where a colored tape could be used effectively, but you will never go wrong with white or black – the same cannot be said for colors. The Fi’zi:k tape is strong, durable, easily clean-able, looks classic-yet-modern, is handsomely thin, has great stretch-strength, does not disintegrate like corks and it looks mighty fine, too. That’s quite a list. It’s not necessarily cheap, but it’s worth it because (applied properly) you should get a full season of riding, if not more, out of it. 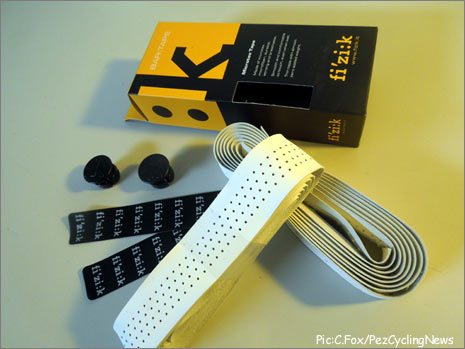 This is the tape, my friends!

Prepping The Bar
One of the most important steps in wrapping a handlebar is finding the time and the peace-‘n-quiet to do the job right. You cannot rush this. It requires your full concentration. A Zen-like focus, please… now we can begin. 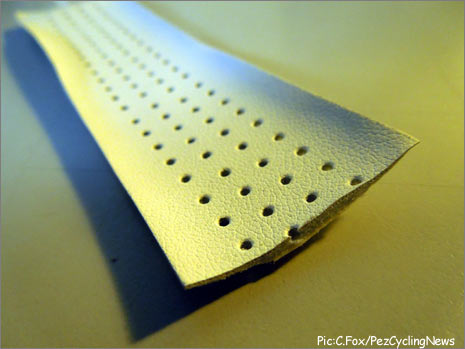 It’s the thin-ness that makes the Microtex tape perfect for our job because it allows you to model the handlebar up, putting cushion and extra support where you need it. Although Fi’zi:k makes gel pad things, they are big and clumsy. Using old bartape, I like to add an extra strip on the top of the bars and on the top of the drops. Another handy addition is a thumb rest just under the lever bodies to help with braking on those long descents. A friend of mine has carpal issues and finds that making his drops more vertically oval-shaped helps. In any case, this is where a lot of time and effort should be invested because it pays off in comfort.

If you’re running both cables around the front, use a bit of old tape to help to ease the transition into the lever bodies, smoothing out the bar shape. For today’s wrap, this is the only custom shaping we’re adding. Now, if your bars have an indentation in the back (and you’re running both cables in the front), the best way to round out the bar is to cut the bead off of an old clincher tire and tape that in – taping in a piece of cable is too thick and hard. Lock all of your customizing in place with electrical tape. It stretches around nicely and is easily removable afterwards. 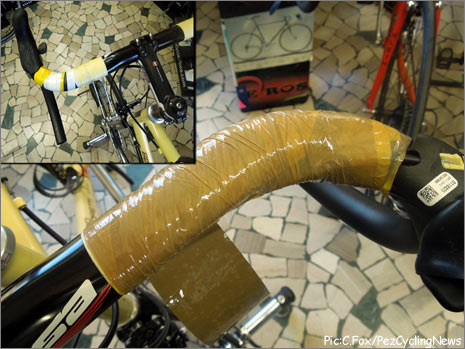 After you’ve got the bar cush-ily shaped, use packing tape to wrap the bar, pulling tight so little ridges or striations form in the tape. These will give the adhesive on the bartape a better hold and prevent it from slipping down. Also, this packing tape protects the handlebar from disintegrating tape and its sticky adhesives. When it’s time for new cables, a quick cut across this tape (over the cables, not the aluminum or carbon bars, please) and it all comes off in one big piece, the cushions, electrical tape and all. This is especially handy for people that use cork tapes that have a nasty habit of crumbling apart – you probably want to run the packing tape or at least electrical tape all the way down the drops too. 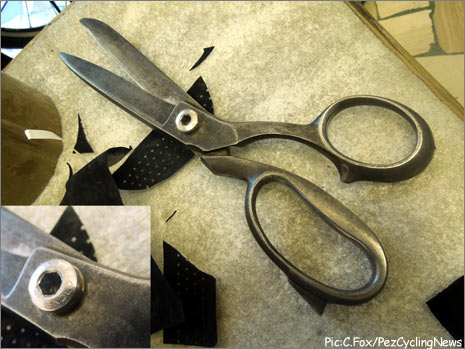 With extra pieces of the Fi’zi:k bartape, cut out two “D” or half-moon shapes about 7cm in height. If you don’t have any extra pieces, your friendly bike shop should give you some left-overs. Tape the flat sides along the shifter bodies, wrapping the round part to the center. The Achilles heel of many bar wraps is gaps in the tape behind the shift levers. The reason is because that one little strip of tape included in the box is often not big enough to cover any or all potential gaps. This way is foolproof. 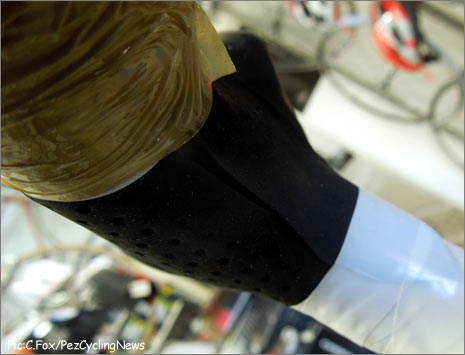 These two pieces of bartape cover any potential gaps behind the levers.

A line of silicon around the bar caps keeps them in place forever. Yet, if or when you need to get rid of them, the caps come out with a firm pull and clean up perfectly. Now your bar is properly prepped and ready for wrapping. 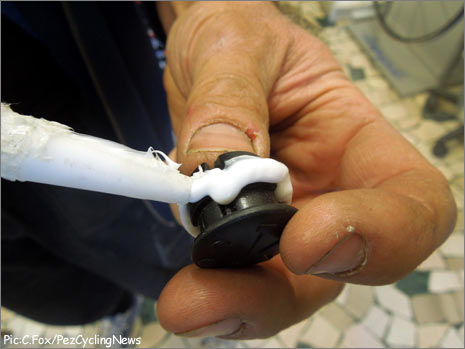 Keep caps in place with silicon

Let’s Wrap
Get the scissors and cut off a diagonal sliver of bartape, as shown in the photo below. This gets you started at the right angle. It also gets you into the thicker middle section of the tape, which is the way to have an even thickness around the end of your bars. All too often handlebar tape starts out (and ends) too thin or too fat relative to the rest of the wrap, sure signs of amateurism. The Fi’zi:k tape wants to be handled firmly. In fact, keeping it pretty tight helps the tape to form around the bends and surfaces nicely. I’ve heard of people warming it up a bit in the oven to get it even more pliable, but cold wrapping works just fine. Even though I prefer the Microtex faux leather finish, today we’re using their suede finish tape. It’s cool and plush but does not last as long. 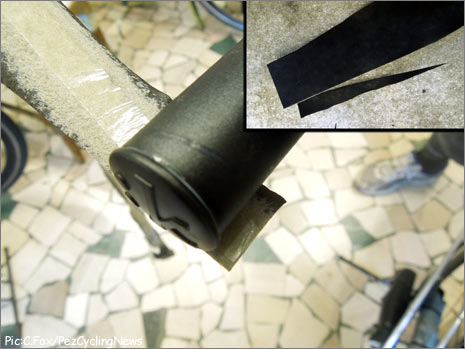 These photos show the amount and angle to cut and the correct starting position.

Even Spacing Is Key
The first five times around the bar, the tape should be evenly spaced. Tip: use the perforations in the bartape as a guide to keep things consistent. With this tape, I find that three perforation rows is the perfect width or distance between wraps on the drops, keeping you in the meaty part of the tape for a perfectly level surface. Another major advantage of Fi’zi:k’s thin-ness is that no matter how wide or narrow your spacing the tape lays pretty much level. Try this with thicker tapes and you’ll get a wavey, irregular surface. 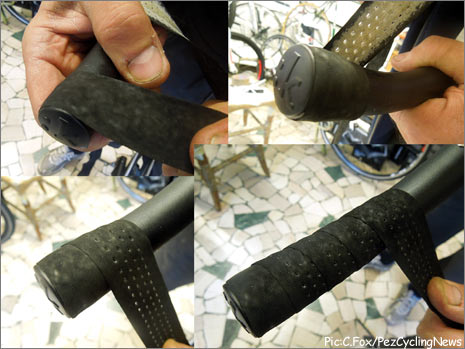 This sequence shows the motion and perfect spacing.

Now Into The Bends
As you near the bend in the drops, the distances start to foreshorten or angle out, meaning that they are closer together on the insides of the bends and larger outside, see photo below. Even here as you round the curve, all of the wrapping should maintain perfectly proportional spacing. This part is critical, it might take you a few times wrapping and re-wrapping to get it right, but you MUST approach the shift lever body in the right place. The following photos show exactly how to approach this tricky part. 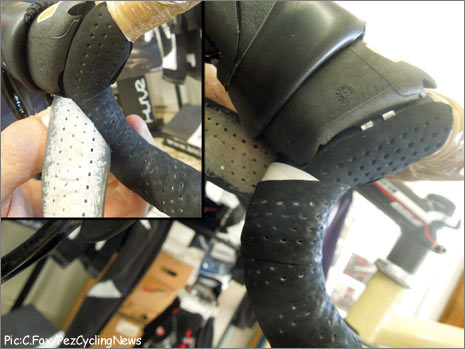 This is where you need to be to wrap over the lever body, notice how the tape will overlap the body a little bit. 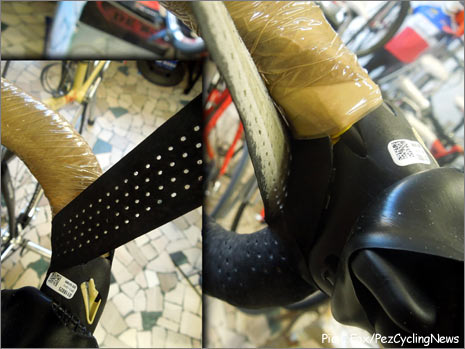 This shows how the wrap over the top of the lever body is done.

Just like the drops, here rounding the curve in the bars requires a foreshortening or angulations of the tape. Slowly expanding the width of your rows as you round the corner. ALWAYS pay attention to the perfect row spacing. Once into the straight part of the handlebars, transition into regularly spaced rows. Fi’zi:k tape is pretty long, so you’ve got a choice: your wrapping angle can be almost straight up, putting more meat on the tops or you can keep it thin here, using the three or even four row perforation spacing. In this case, you will have a greater angle as you move towards the center of the bars, this type of customization can be seen in the photo below with the white bartape. 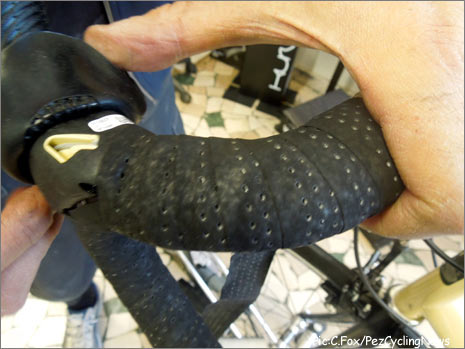 Here’s the proper way to work the tape evenly around the curve. And today, we’ll use a two perforation hole spacing on the tops.

The white tape clearly shows how to layer the tape around the bends. Notice how it transitions from one to a two to a three and ends at a four perforation hole spacing.

Finishing It Up
OK, you’re almost home, don’t screw it up now. This is another place where many stumble. First wrap the bars all the way to where they should arrive and snip the length so it finishes under the handlebar. Make sure you’ve properly spaced the rows along so you arrive in the exact location shown in the photos. If not, then re-wrap the tops trying different spacing so you end up in the perfect position. Now, back the tape up one row and cut the tape at an angle parallel to the stem. Some people use a marker to draw a line, then back the tape up and cut, so it ends up straight. 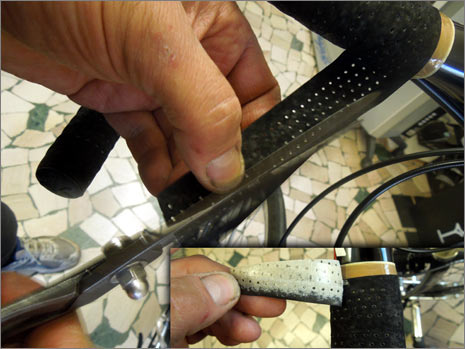 Cut the tape parallel to the stem, notice where it falls in the photo insert. 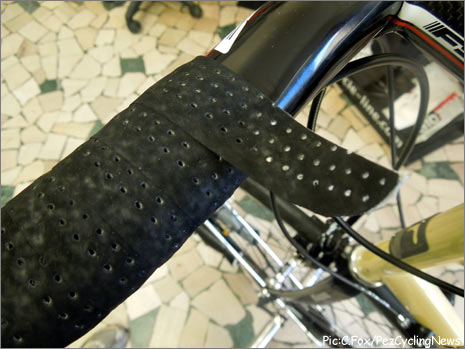 Extra-cleanliness means rounding off the corner. Then tape it down with clear Scotch tape.

Now lock the bartape down with a couple layers of Scotch tape, which is better than electrical tape because it doesn’t stretch as much and has a stronger adhesive. If you are wrapping the bar ’til just after the levers (leaving most of the tops tape free), then you should glue down this last row of tape with Super Glue, then proceed with Scotch and finishing tape to avoid slippage. With finishing tapes you can get a little creative; red , yellow or blue or something else that calls out a primary or secondary color on the bike would be fine. Some people use a needle heated up with a lighter to melt the tape ends together, but this only works with black. I find another couple layers of clear Scotch tape keeps everything clean and in position. 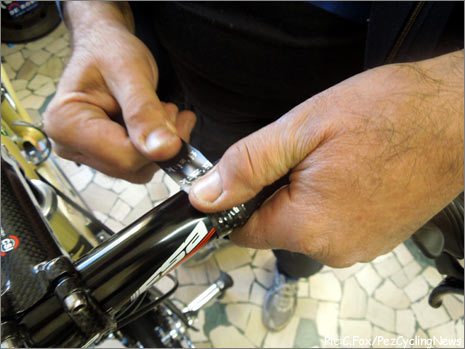 Now The Other Half
The other side of your handlebars works the same; meaning that you wrap from the outside to the inside. Got it? The photo below shows the proper tape direction. If you’re wrapping old school bars like those in the photo and the gum hoods are a bit dried out, here’s my tip. Tape down the clamp and wrap the bars with the brake levers removed. You’ll also have to install the brake cables again, but this is the only way. 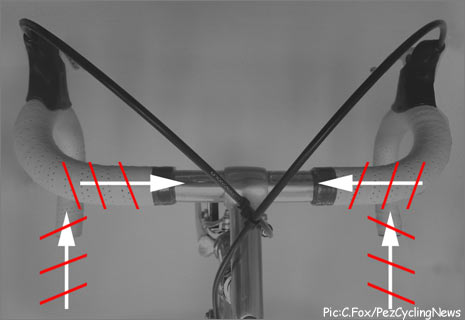 My last tip: practice makes perfect. You might want to try this out on your own bike before offering it up as a gift to others. 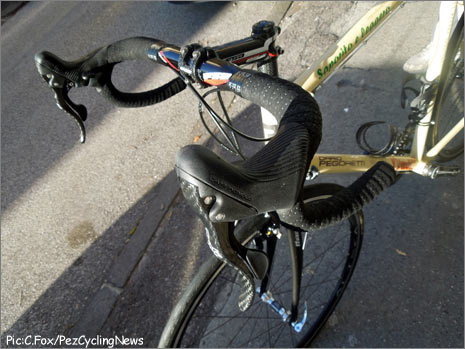 Here’s wishing everyone a Seasons Greetings and Happy Holidays from Mr. CheapOh!