We first saw these wheels when Tyler rode them in that much over hyped uphill pre-Tour TT. We had to have the bike, and then we had to have the wheels! Take a first look at Zipp’s little red rockets, the Carbon 202’s.

Begging and pleading our way into a BMC team bike wasn’t the work of lesser peasants, like us for instance. But it was good a exercise, as we learned that camping out in the owner’s front yard might not get you what you want, but bathing naked with the garden hose anywhere in the neighborhood will. I did lose my soap, but we got the wheels!

It’s not like you can miss seeing Phonak’s team edition SLT01 bike and, despite their extremely diminutive stature, It’s not all that difficult to note the red tint Carbon on Zipp’s latest lightest 202 wheels. 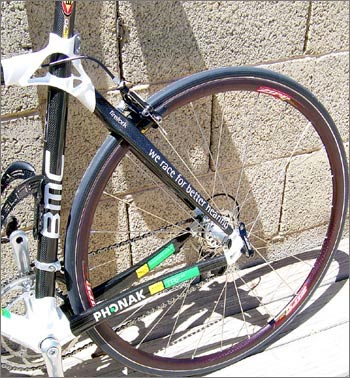 We tested Zipp’s 303 set and were happy with their mid depth wheel. We also have the 404’s (as they were mounted on the BMC SLT01 Team bike we tested).

But I really wanted a set of the 202’s, just to see what it would be like to have a more classic looking, low profile set of carbon tubulars. Clean looks came first, but even though we’re not weight weenies here at PEZ, the fact that these things have an insane rim weight of 250 grams didn’t escape my eyes. In fact, these babies weigh in at “1060 grams average total weight for the set” according to Zipp. Average shmaverage, that’s pretty light.

Nice Tight Fit
Normally I would look for something more substantial, even at my weight of 145-150 but, given Zipp’s strong emphasis on building things based on performance, I really wanted a crack at these. While they (Zipp) produce some very light gear, practical durability has never been an issue with any of their products that I have tested. They simply go the extra mile with large R&D budget that includes help from both Aerospace and Auto Racing professionals. The line in the 303 review about the hubs having better tolerance than the watch I had back then turns out to be closer to the truth than I thought, as Zipp actually use a machine made for watch machining to create the hubs! 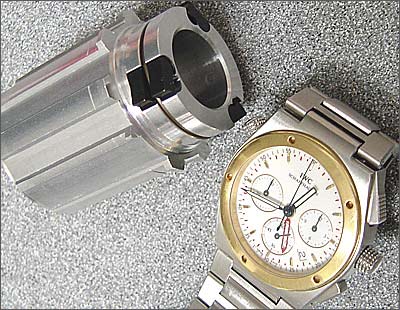 The tolerances are extremely high during several cutting phases and the machine can actually turn the parts in multiple directions without requiring removing and re-mounting the part that is being machined for multi directional machining. That’s important because the tolerances they cut at are so close, that human error involved in remounting the part between machining steps, no matter how carefully someone tries to do the job, are simply greater than what Zipp’s machine will cut to when it never has to release the part. In fact, the widest tolerance used in any dimension relating to the bearings is less than 1/5th the diameter of a human hair… 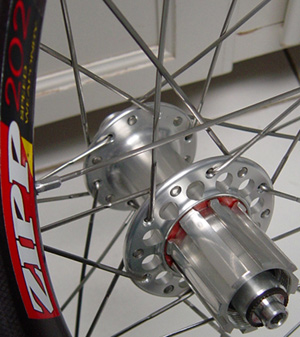 Tolerances are also very high in the bearings that Zipp have chosen. They are made at 10 millionths of an inch tolerance when few do better than 25 millionths (that’s 150 % less tight…) and some do worse. That is important, because only a few of the bearings will make contact and do their job when they are different size… Zipp also spend the extra money on things like Teflon retainers (inside parts that keep the bearings in place) so that the balls don’t rub on metal as they turn (the standard for wheels is Brass…). It costs Zipp about 7 times more for their bearing choice than the best sets available if they bought them in the far east, meaning they pay more for a single bearing than they would if they bought enough for an entire wheel set from the far east. The cost and refinement found in Zipp’s Z series are even more insane…

The Right Stuff
Their choice of materials for the hub shell / Flange is also extremely high, as they only use grade-certified US materials from Alcoa. No “certified” equivalent materials are made in Asia (so Zipp is spending far more than most). And the safety and durability factors are VERY important to a US based company that actually manufactures things in the USA, as they have far more to lose than companies that simply re-badge foreign product, but don’t have the tremendous domestic investment that Zipp has.

Well Spoke-in
Zipp even go whole hog on spokes, choosing Sapim CXrays that cost roughly 3 times more than the Revolution and Laser spokes found on most high end wheels. The CXrays are as light or lighter than most and with the slightly bladed profile and better material choice (they have more than DOUBLE the fatigue life) it makes for a better all round choice. Zipp tilt the spoke holes to let them sit in the rim with as much strength and as little stress as possible. Zipp also mount the nipples in a way that doesn’t require you to remove and re-glue a tire if you want to true them up (although these never needed truing, even after a few hundred miles). They also use standard nipples that you don’t need a special tool for. 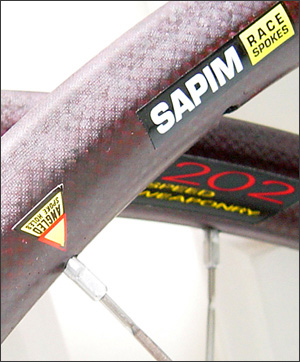 Pressing Issues
At the hub end, the spokes pass through an extremely costly spoke hole prep called S.H.I.F.T. Spoke Hole Impact Forming Technology where a set of tools impacts spoke holes, compressing the material and making it more dense around the spoke hole and 50% more resistant to cracking. 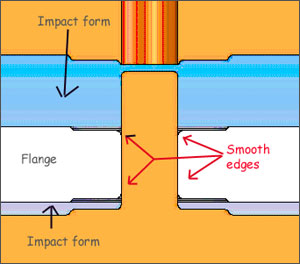 When you use a simple chamfer tool, you do nothing to make the material around the hole stronger (you simply remove some), and leave sharp edges that provide less contact area between the spoke and hub, applying more stress to less material (hello spoke breakage…). That’s why several hub manufacturers will Void their warranty for radial lacing spokes while Zipp recommend it. And Zipp don’t mind publishing the process, because it’s expensive enough that most folks won’t spend the money. The same process is used on aircraft skin to make rivet holes stronger, but it’s only used on the wing undersides and fuselage for most aircraft because it’s too damn expensive. 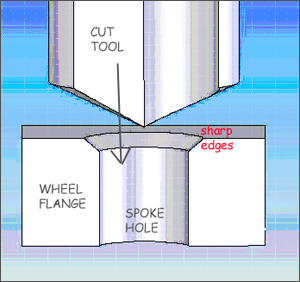 Seeing Red?
The cool red tint is a new resin that makes these rims both cool looking and, well cool-er. It allows for better heat handling than anything else used in Carbon rim technology to date. 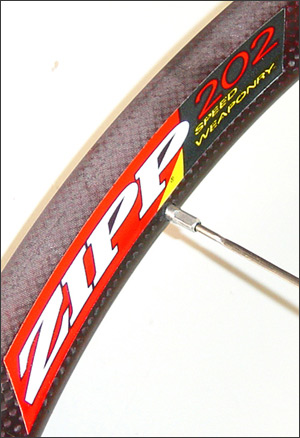 Couple the new resin with a refined side wall and Zipps brake pads (below) and you eliminate the majority of one of the more common complaints about carbon rims, choppy braking feel. One of the things that always nags at me is that testers (even very qualified testers for major publications) complain about brake performance on some carbon wheels, but don’t run the right pads (a technical term we call “half assed”…). If you’re gonna play with special things, you need to sweat the details guys… 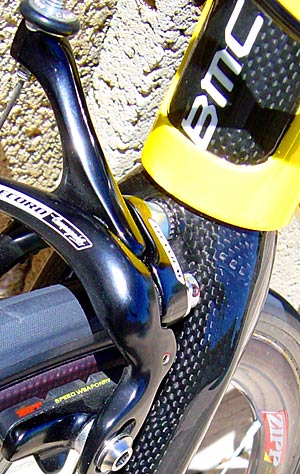 If you’re wondering who wants these wheels other than weight weenies, mean-spirited instigators will love em.

Changes in pace are this wheel’s thing. They spin up faster than anything else on the road. Although there are a couple rims that are very very few grams lighter (and the further the weight is away from the Hub, the more you feel it), the Zipp 202’s do a better job at accelerating because they are simply a more complete package than other ultra-ultra lights. Low rim weight doesn’t translate to speed if either the rim or the spokes are sloppy and flexy, or if the bearings are crap.

The combination of a little stiffer rim than other low profile Carbons (and several low profile alloys) and the ability to run very strong Sapim spoke at a higher tension make for a very potent combination. You pedal, they go, plain as that.

The fact that the rest of the materials are so well made is the icing on the cake. There are lots of dogsh!t low weight “tuner” parts available for those of us stupid enough to use them, but I have no worries about these.

Another nice feature is the wind tunnel performance. No, these are not to be considered Aero wheels! They are however, more aerodynamic than any other 38mm or less semi deep rim on the market (other than the Zipp 303’s…). The combination of rim shape and the Sapim spokes lets the 202’s cut the wind pretty well for shallow wheels. Another nice feature is that the 202’s are effected far less by cross winds than big bladed spoke, semi aero wheels. A popular set of wheels from a French company that use very big bladed alloy spokes for instance is less aerodynamic despite it’s giant bladed spokes, but those spokes leave it more subject to the negative effects of cross winds. A great example of Zipps push to get better is that the 202’s are basically equal in drag performance to Zipps own mid dish 303 of just 3 years ago (and even more so in a cross wind!).

The 202’s have a good niche. You will have a tough time finding a lighter set of wheels that can be run day in and day out, and these can…

I would still rather run a genuine aero set of 404’s for everyday wheels, as shaving grams gets pretty unimportant after you hit any kind of speed. After you get into the Low 20’s, Aerodynamics plays a far more important roll than a few grams does and most competitive riding, even in the hills, is done at speed. But in situations where you are climbing rapid fire hills, have massive pace changes or very steep climbing, these wheels are so responsive it’s almost laughable.

They feature the same easy switch between Campy and Shimano (you need to buy the extra cassette body @ $100), and Zipp have corrected the rattling Carbon Hub caps since the 303 review! You can find them in a few shops, but it’s probably gonna be a special order item. And there is a bit of a demand for them, so you night need to be patient. Retail is $1500 and change, which is a fair chunk of dough, but still less than others in the weight class that spec off the peg components costing far less than the Zipps. And be sure to ask the retailer to toss in a set of Zipps brake pads, as you’ll enjoy the ride more and not risk melting your standard pads on to your flash new wheels…

Check out the full line of Zipp gear at Zipp.com.

Beat the Heat: Pre-Cooling in Athens