Concussions are an unfortunate risk in cycling despite advances in helmet technology. Can hyperbaric oxygen therapy help to accelerate recovery? 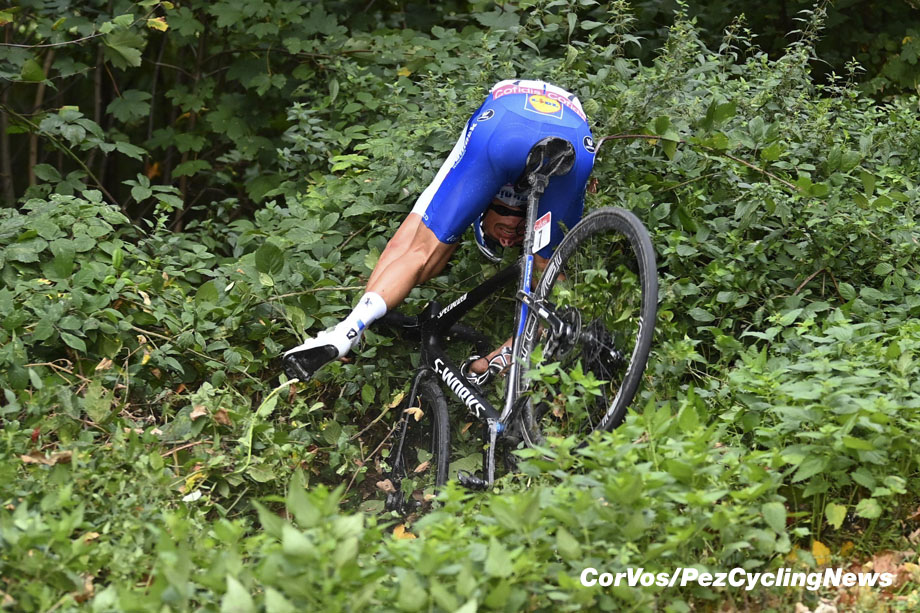 There are many different variations in traumatic brain injuries, and very few tried and true ways to consistently resolve symptoms. In today’s video, we take a look at whether hyperbaric oxygen therapy – breathing higher than normal pressures of oxygen – can help with recovery.

In today’s video, we’ll dive into the question of whether higher than normal oxygen levels might be an effective therapy for concussions, which are a category of traumatic brain injuries or TBI.

One of the most challenging injuries to treat and recover from are TBIs. Partly it’s because the injury is largely invisible, unlike a broken bone. Another challenge is the societal stigma around mental health.

TBIs can occur from many sources and in many situations. We are probably all becoming much more aware of their prevalence in contact sports like American football, hockey, or boxing. They can also occur in military personnel and in vehicular accidents. Another unfortunate cause of TBIs that may actually be a massive under-reported epidemic is in situations of domestic violence. TBIs are not restricted just to direct impact to the head, but can occur without direct head trauma. For example, whiplash from car accidents or with violent shaking can also cause TBI. The wide variety in causes and symptoms make it very difficult to generalize about TBI, or to plan or predict recovery.

One common theory to what happens with concussion-related TBI is that the trauma causes bruising of the brain tissue, which in turn can cause inflammation along with damage to the blood vessels and nerves within the brain. Over the past decades, one proposed medical treatment is the use of hyperbaric oxygen therapy, which involves being inside a small chamber where the pressure is increased, resulting in higher than normal oxygen levels being breathed. The theory is that this increases the delivery of oxygen deep into the brain tissue, speeding up healing and theoretically increasing repair and regrowth within the blood vessels and nerves within the brain.

There are mixed results within the scientific literature about the effectiveness of hyperbaric oxygen therapy, but that might be partly due to the challenges in research. As noted earlier, the wide individual variability in TBI means that there might not be one single therapy that works for all TBI. There’s the well-known placebo effect, where just being offered any form of treatment might be of benefit compared to not being offered treatment. Because therapy requires being under pressure in a chamber, it is very hard to mask or hide the patient from knowing if they’re under pressure or not. Finally, it could be that the patients just got better regardless of therapy, in much the same way that a muscle bruise would get better over time regardless of whether we treated it or not.

In a 2021 review of 12 studies from 2000-2020 that directly tested hyperbaric oxygen therapy for TBI, Biggs sought to determine the overall benefit of hyperbaric oxygen therapy, and also how much of that benefit was due to the therapy itself and how much was due to the control condition without actual hyperbaric therapy. He analyzed the effects on both cognitive or mental performance tasks, and also on the changes in symptoms. The first conclusion was that therapy DID improve responses in mental functioning and symptoms, with medium and large improvement, respectively. The yellow parts of the two pie graphs show the percentage of benefit that occurred with the control condition in these studies, which was about 1/3 of the overall benefit from treatment. This might seem bad but, even when you take away the normal improvements with the control condition, hyperbaric oxygen therapy still seems to provide clear benefit in healing from TBI.

There’s still a lot of work that needs to be done before hyperbaric oxygen therapy can be recommended across the board for TBI treatment, but I hope that this video gives you a deeper insight into its potential. 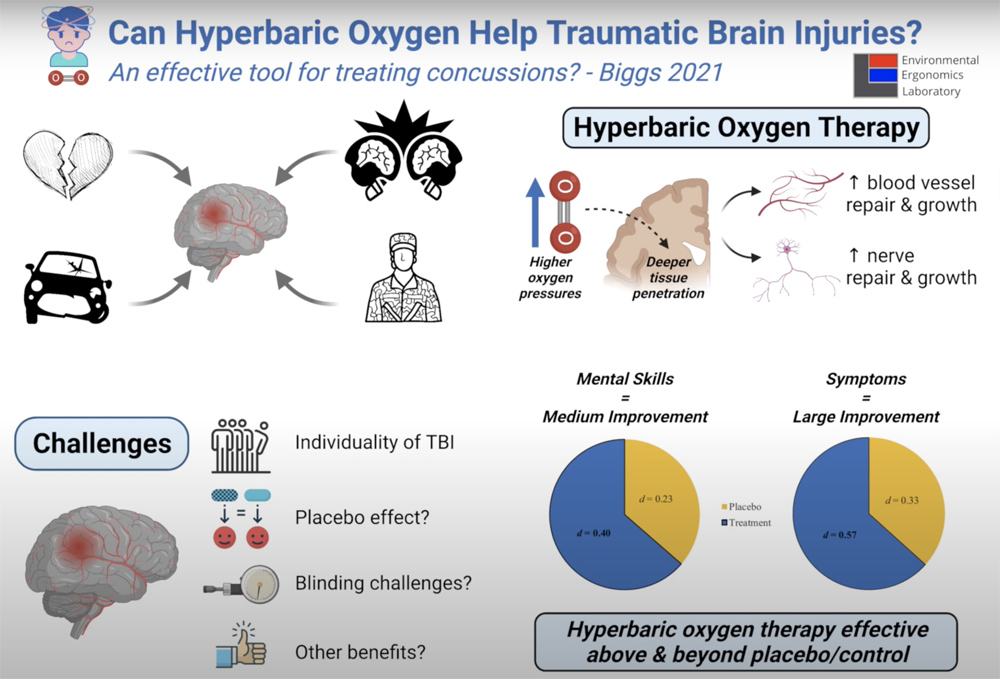