TOOLBOX: The benefits of ingesting exogenous carbohydrate (CHO) during prolonged exercise performance are well established. A recent food technology innovation has seen sodium alginate and pectin included in solutions of multiple transportable CHO, to encapsulate them at pH levels found in the stomach. But are the marketing claims of improved gastric emptying and CHO oxidation worth your money? Let’s find out!

This topic has been recently tackled on Fuel the Pedal podcast with Lewis James and Stephen Mears:

Endurance athletes have always struggled to fuel their bodies…

This is a universal truth for all those engaged in road cycling or other endurance-like events. If things were so simple as eating or drinking unlimited amounts of CHO containing foods while riding or running, we wouldn’t be having this conversation.

It is known that exogenous carbohydrate ingestion during prolonged endurance exercise can enhance performance in events of sufficient intensity and duration to be limited by CHO availability. And even though we know a lot more regarding the combination of multiple transportable CHO sources ( e.g. glucose:fructose) to maximize CHO gut uptake, large doses of CHO (>90 g/h) may exceed GI absorption capacity and lead to GI symptoms, which may lead to professional athletes and recreational sportspeople to withdrawal from an athletic event.

In the last couple of years, specialized sports foods claiming to address such factors via the use of “hydrogel technology” have become commercially available. But what are these products really and what are their claims?

How does the “hydrogel technology” allegedly works? 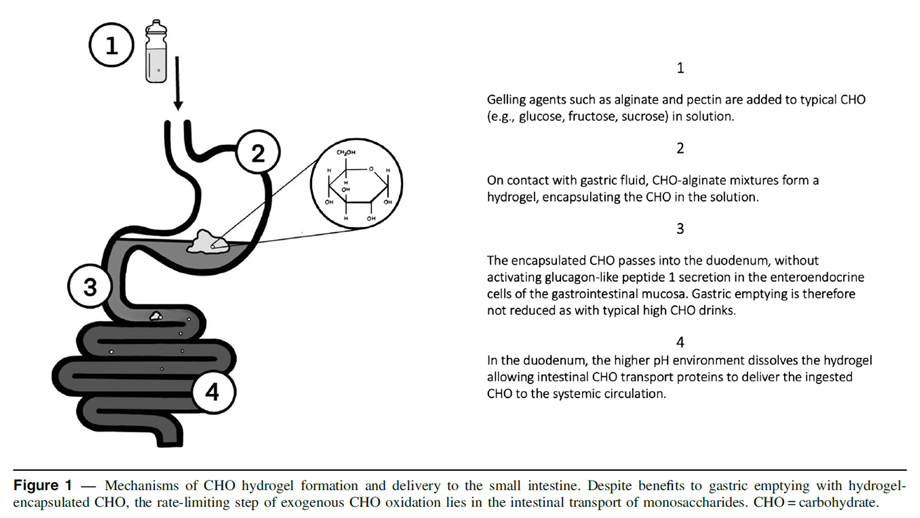 These products usually available in a powdered drink form and usually combine typical CHO sources (maltodextrin + fructose) with pectin (a soluble fiber) and alginate (a polymer derived from seaweed) which undergoes a gelation process when in contact with low pH solutions such as stomach acid. This gelation is able to encapsulate the CHO, supposedly enhancing rates of gastric emptying and deliver this “hydrogel” solution to the small intestine where it would dissolve in the higher pH environment for absorption, leading to reduced gut discomfort and increased CHO delivery. and performance benefits. At least in theory. But what does the science say about this? 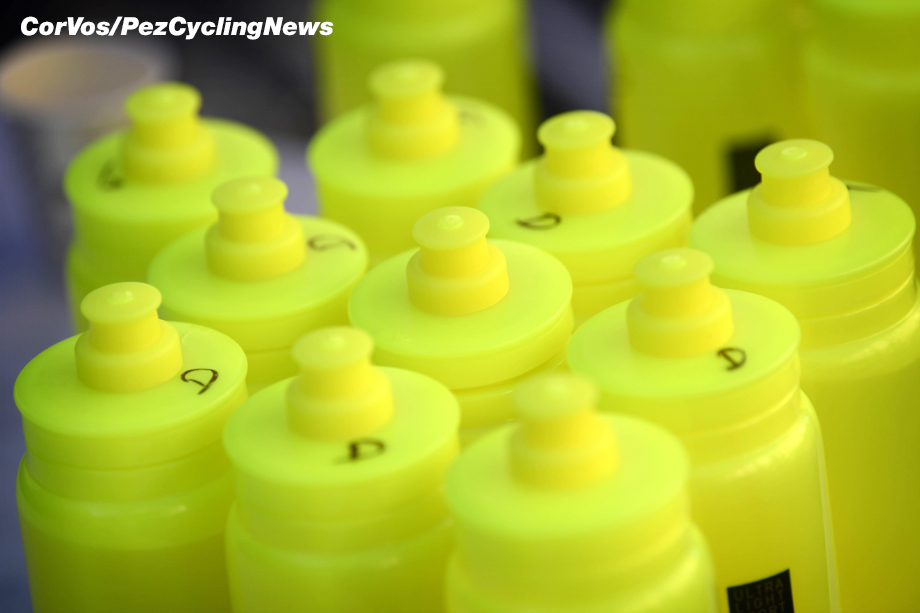 Effects on CHO oxidation
This topic has generated interest in the scientific community and some research groups around the world have decided to study it. And since this “increased carbohydrate delivery” is one of the main claims, many of the research groups focused on measuring it.

However, studies looking at direct comparisons between CHO-matched fluids and hydrogel products showed no differences in exogenous CHO use during exercise.

Since the rate-limiting step of exogenous CHO oxidation is believed to lie in the GI tract and not cellular glucose uptake this could indirectly indicate that CHO hydrogels fail to show improvements in gut CHO transport as claimed. Which means that “hydrogels” work just as well as traditional sports drinks, at least in the studied conditions.

One important thing to note though, is that most measurements of substrate oxidation in runners and cyclists has been performed at relatively low intensities and short periods of time.

Interestingly, one particular study with runners providing 90g/h, for 2h at a relative intensity of 60% VO2 max showed (barber) of a decrease in rates of endogenous CHO utilization (muscle and liver glycogen) and an increase in fat oxidation when high rates of CHO intake were consumed in hydrogel form versus fluid. This could possibly indicate a muscle glycogen sparing effect but for now this cannot be claimed over just one isolated study. Especially if we take into account that participants of this study were in a fasted state, which is known to alter substrate oxidation per se.

In summary, “hydrogels” work just as well but we still don’t know what might happen in other more realistic scenarios with higher exercise intensity and duration.

Effects in reducing GI symptoms
A similar scenario happens with the occurrence of gut distress with hydrogel use. Manufacturers claim that “hydrogels” use reduces gastrointestinal problems when compared to similar traditional drinks. But so far, hydrogel solutions don’t seem to improve GI tolerance over comparable CHO sources in traditional fluid form.

Similarly, to what happens with CHO oxidation, it remains to be seen if “hydrogels” reduce GI symptoms at higher doses approaching and above intestinal saturation. But yet again, this still requires further and more race-like scenarios perhaps using different CHO sources along with “hydrogels” vs. with more traditional drinks, over longer periods of time as we pointed out on episode #37 of Fuel the Pedal podcast.

In summary, “hydrogels” perform just as well as traditional drinks when it comes to gut comfort, so it may just come down to personal preference and taste, since “hydrogel” drinks usually have a more neutral flavour in comparison to other sports drinks.

Given the similar contribution of substrate utilization observed, performance was similar with “hydrogel” drinks when compared to isocaloric and CHO-matched traditional drinks. So again, “hydrogels” appear to perform as well as any other regular sports drink, in the conditions tested.

As previously stated, research so far has been performed in laboratory settings where the hydrogel drinks were provided in isolation and compared with a CHO matched solution. It still remains to be seen what would happen if both “hydrogels” and traditional sports drinks were provided alongside other solid CHO-rich foods, over a longer duration period and with higher intensities. In addition, the current literature involved sub-elite athletes who might display different substrate contribution to fuel high intensity when compared to elite athletes.

So it may be just as both Lewis James and Stephen Mears state: “perhaps we haven’t done the right studies yet”. 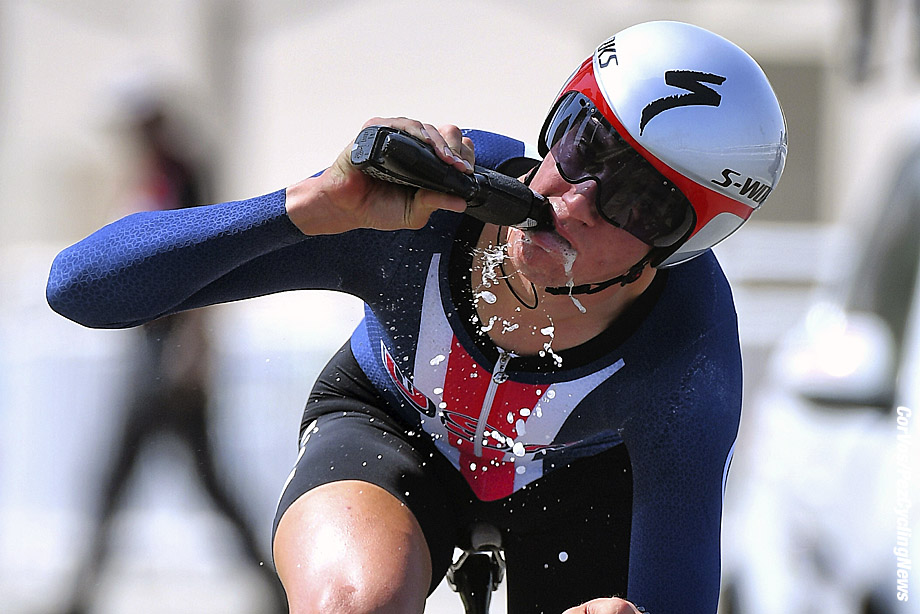 Promising effects on oral health
The consumption of CHO drinks in the context of cycling is frequent during training but in particular during competition where large amounts sports drinks are consumed if we think about a grand tour where cyclists are repeatedly consuming CHO-rich drinks and foods over 21 days.

This chronic exposure to sugary rich foods may increase the risk for elite athletes to display a poor oral health, including dental caries and erosion, which might affect their quality of life and professional performance. Typical sports drinks are known to have low pH (<4) and this exposure to low-pH appears to have a strong, negative influence on caries’ incidence and dental erosion.

A recent study looked exactly at this by comparing a amylopectin starch (AP) drink with vs. maltodextrin + sucrose drink vs. maltodextrin + fructose hydrogel drink providing 95g CHO/h and found a less pronounced pH fall for “hydrogel” group compared to the more acidulant-containing drinks.

This shows that a carbohydrate solution without added acidulants, which are commonly included in commercial sport drinks, may have less deleterious effects on oral health, particularly during frequent consumption and dry mouth conditions which are both relevant to individuals during intense exercise. 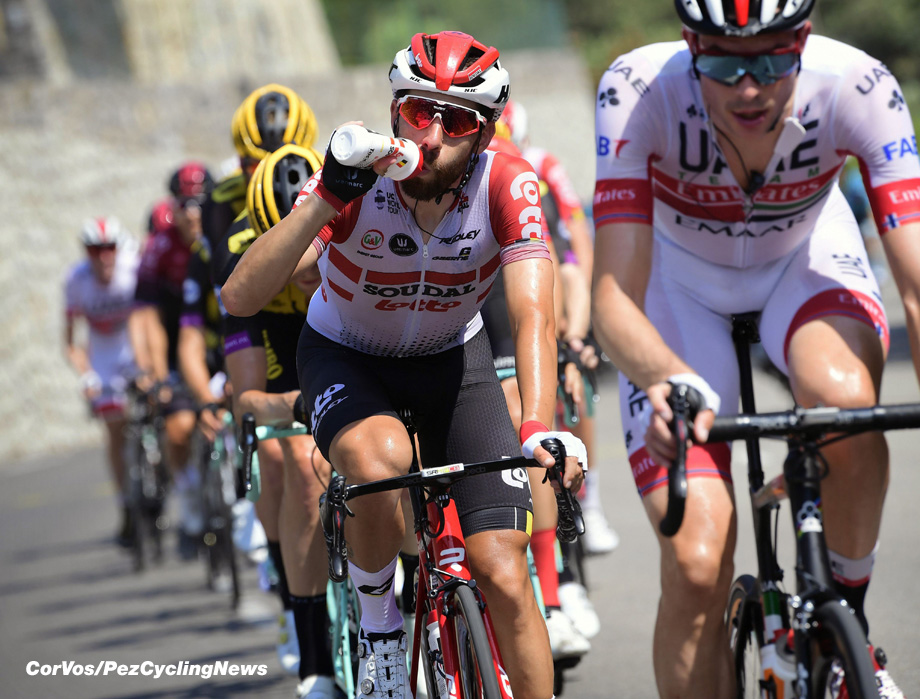