Beep, beep…beep, beep: We interupt the regularly scheduled Tour de France coverage for an in depth close to home analysis of US criterium racing. What?! We can’t all enter races like the Tour. Some racers love criteriums, others hate it but many spectators and sponsors find it exciting. Plus it’s what we got so I’ll get into a few ways you can embrace criterium racing and train specifically for crits. Woohoo!

A good criterium racer needs experience. Being fast and fit is only a part of the equation. Strategy, patience, pack positioning, bike handling and luck are just a few strengths a crafty crit racer possess. But while you are working on becoming that crafty crit racer, you can tailor your training to mimic a criterium.

First, it is important to define what actually happens in a criterium in terms of power in order to replicate that power in your training. Without getting into a detailed description, power in watts is to a cyclist, as horsepower is to a Ferrari. At first glance, the graphical power output of a cyclist racing a criterium looks like a bunch of goobly-gook. A typical SRM or PowerTap file from a criterium spikes up and down several times per lap creating a complicated maze of peaks to the untrained eye. However these short sharp peaks, anywhere from 300-1000 watts or even greater, represent the cyclist sprinting out of corners, accelerating, attacking, counterattacking, and finally the big spike: the field sprint. Drops in power to zero (a.k.a. Zero Time) represent time spent coasting, setting up for a corner, cornering, or just getting sucked along in the peloton’s draft. Further analysis shows how much time was spent in certain power zones and also how much time was spent at zero power. 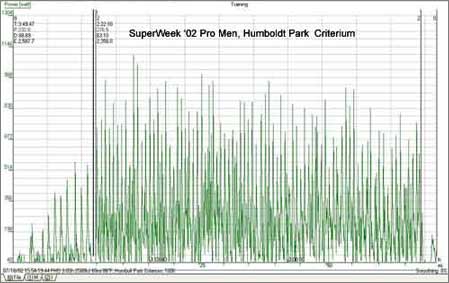 There are two power zones critical to successful criterium racing that are often overlooked in a traditional training plan: power above your threshold and zero time (if that is even a zone). Often times comparison of files between the winner and a pack finisher in the same crit reveals that the winner spent more time at zero! However, when it really counted such as making “the break” or the sprint finish, the winner’s power output dwarfed the pack finisher. Why? Because the winner spent more time at zero, was more rested, and metered his efforts better than the pack finisher. This also goes back to that crafty crit racer thing.

Now this may not always be the case (or possible) so in addition to increasing your zero time in a crit, you might also want to consider training at the type of power outputs you’ll need to chase and drop your competitors. For starters, entering more crits is an ideal way to train which, again, goes back to the crafty crit racing experience thing. In addition, short intervals 5-20 seconds in length at power levels WAY above your threshold mimic criteriums the best.

Looking at an SRM file from a typical crit reveals anywhere from 10 – 80 spikes depending on the course, category, length, level, intensity, and terrain. Break that down into an interval workout and start with a workout of ten to thirty 5 second sprints (depending on your fitness level). Now further break up those sprints into sets of 4-6 sprints each. Once again start slowly and work your way up in intensity and number of sets. But you can do it; its just all out for five seconds followed by 15-30 seconds of rest and repeat. Break up the sets with 2-3 minutes of rest and you have yourself a great criterium specific mid-week workout. In total a typical workout may be only 2.5 minutes of intensity but its at an intensity much much greater than your power at threshold. We’re talking 300 -1000+ watts! The idea is to stimulate your body to be able to handle power outputs of this magnitude on a regular repeated basis. Just what occurs in a criterium.

As your training progresses, increase the duration of each interval eventually working your way up to twenty and thirty seconds. Similarly, increase the total intensity of the workout up to 10 or more total minutes depending on your fitness level. Decrease your work to rest ratio eventually down to a one to one 20 second on 20 second off effort, for example. Before long you’ll be that crafty crit racer coasting along, breathing easy and racking up zero time just waiting to make your move.

Now don’t forget to recover! And we return you to your regular scheduled reading and watching of the Tour de France…

Questions or comments? Email Frank at [email protected] or visit him at FasCat Coaching.com. Frank is a USA cycling certified coach and category 1 racer that sometimes (sometimes!) spends enough time at zero to actually pull off a result in a criterium.

Cadence Training – Should You Take It For a Spin?