Systematic training is focused on increasing your fitness, and most of us think that just means getting as the highest power numbers possible. However, high numbers are not the only goal – equally important is the repeatability of your efforts. 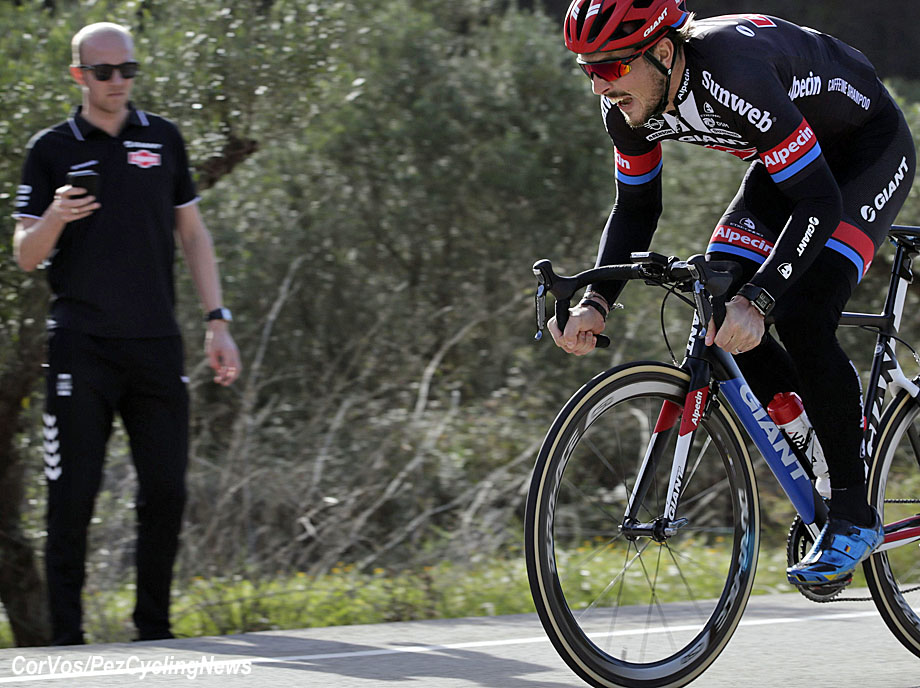 Many of us cyclists train and race with power meters, and they’re an excellent tool for quantifying our fitness. We now also have a slew of training software and metrics to track our training.

Many of us track our power numbers mostly with interest in the max power output. Everything from peak power during a sprint, 1 min power, 5 min power, or the 20 min time trial often used to extrapolate functional threshold power.

Tracking these max efforts is indeed important, and it is true that ultimately we are aiming to get these numbers as high as possible. However, when and how often you can hit these efforts is equally important.

• Can you hit those values at the end of a 3 h hilly ride?

• Can you hit those values over and over again over the course of a ride?

Key to being able to achieve the above is to be repeatable in your efforts. It’s great if you can hang with the main group after the first selection. However, if you’re so gassed that the next selection spits you out the back, you’re not going to be there fighting at the finish.

My Personal Hell
I like to test my repeatability using a workout first designed by Norwegian scientist Bent Rønnestad as a test effort. This consists of 3 sets, each one comprising 13 repetitions of 30 s max effort with 15 s recovery at about 50% of threshold power.

I do this workout regularly throughout the year indoor and outdoor, but I especially like to ensure that I do them indoors at least several times throughout a season. I do them with the ergometer on free mode (i.e., I determine intensity rather than the trainer requiring a specific wattage). Or else I do them riding in Zwift on the flattest course possible so that I don’t suddenly get slammed by a 10% wall or spinning out downhill.

Let’s take a look at the three specific indoor Rønnestad workouts that I did this year on Zwift and see what patterns and insights we can gain. We are using Xert software for analysis. 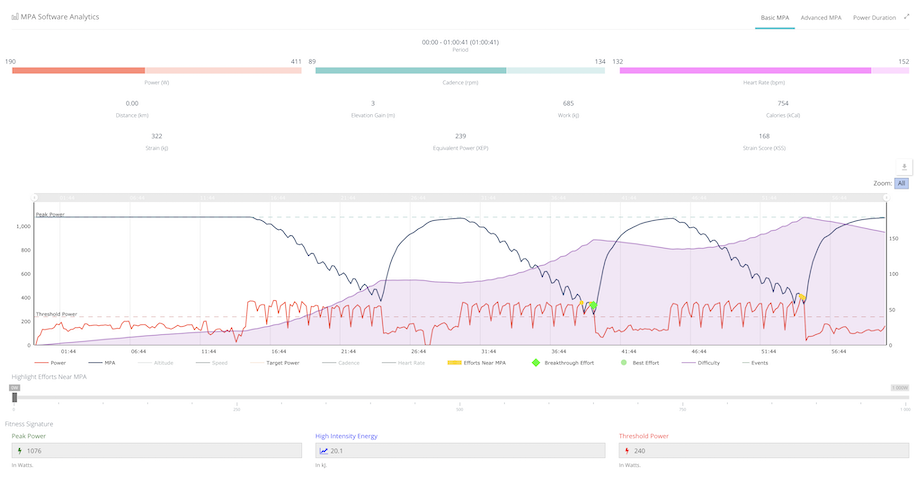 My main goal of the season were the spring gravel races in upstate NY and Ontario, culminating with Paris-Ancaster at the end of April. Therefore, this effort February 17 was right about middle of my long build from early December. All of my training was indoors thanks to the Canadian winter. From an initial December starting Training Load (TL) of 47, I had systematically built TL up to 85.

Beyond the raw numbers, look at each of the three sets themselves. They were extremely repeatable and similar in how much I could drain my fatigue (Maximum Power Available – blue line). Each set drained my MPA fully to the point where it matched my actual current power (red line), forcing the Xert model to repeatedly update my signature. The wattage for each set, whether a pure average or normalized, were very similar at 256 – 259 W.

The similarity of the three sets tell me that I am already developing a very deep base of aerobic fitness, such that I can recover and drain myself multiple times. This bodes very well for being able to perform hard efforts towards the latter end of rides or races, which is usually where the winning moves are made. 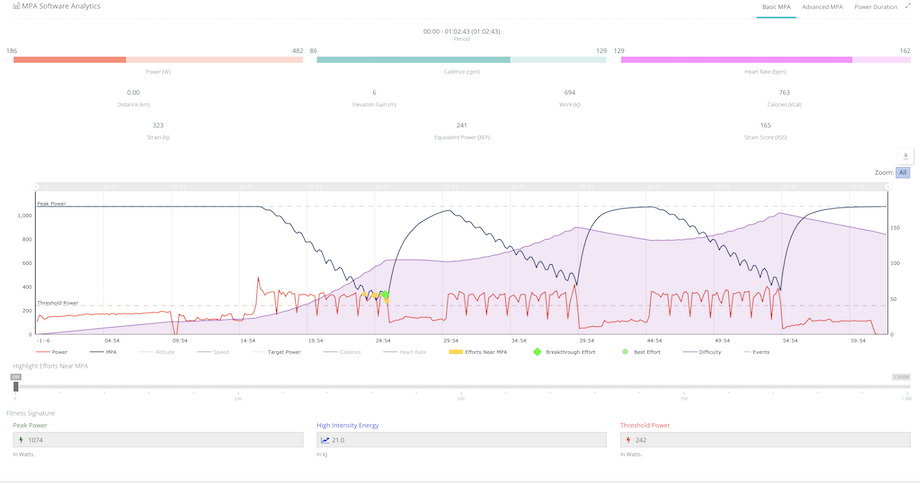 My test mid-April was in the final phase before my peak event on April 29. Training remained very consistent and I had built up my Training Load to 96. I had done three gravel races to this point and performed well in all of them.

As in February, my three sets were fairly similar in terms of wattage (260-270 W) and the level at which they drained my MPA. So I’ve managed to increase my intensity of effort while maintaining my repeatability. Perfect! And it resulted in my performance in Paris-Ancaster (70 km of road, double/singletrack, and MUD) well exceeding my ideal target of top 200 overall (ended up 177th) when my previous best had been 263rd. 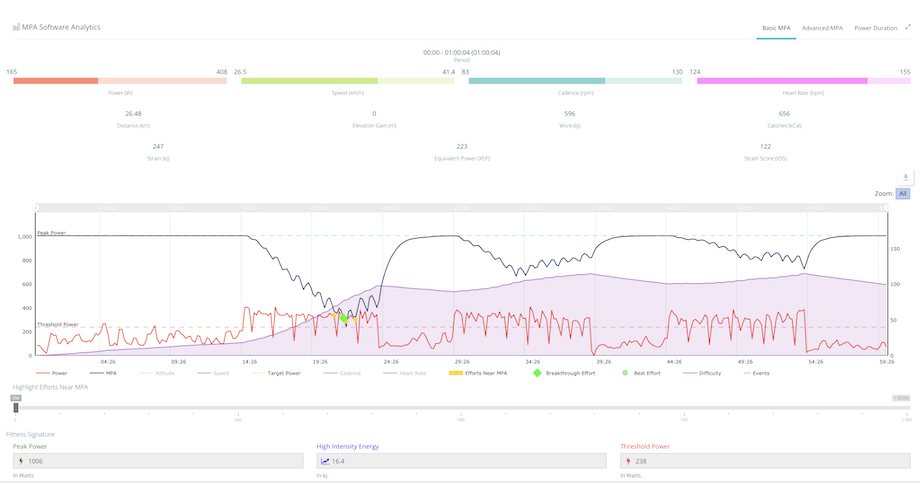 Now to this past weekend’s test effort. My training has been quite sporadic over the late summer and into fall, with lots of weeks off due to moving across Canada for my sabbatical, getting sick for a couple of weeks, etc. My TL had dropped to 70-75 from September through to present.

The file from today starkly contrasts with the two earlier tests. The first set maxed out at 254 W average, then the wheels fell off in the latter two sets, with wattages of only 228 and 225 W. As plainly seen, despite my high perceived effort, MPA was minimally drained in those latter sets. Overall, intensity dropped dramatically compared to Feb/April, and repeatability was non-existent.

Lessons Learned
What this October tests tells us is the importance of sustaining training. Even though Threshold Power in February and October were similar (240 and 238 W), the drop in Training Load just did not permit hard efforts to be repeated. So overall, I was much more fit in February than currently.

You often hear the phrase “matches to burn” when it comes to racing. The more repeatable your fitness, the more matches you can burn. Back in February and April, I could race knowing that I could dig deep multiple times and late into a race. Now in October, I would have to race completely differently, knowing my box of matches is running much emptier.

Note that this pattern of decreased fitness often occurs during CX season. You often hear of the pros skipping a week of racing in favour of going south for a dedicated training block. That’s because, with double races each weekend from October – February, the high intensity racing forces multiple days of recovery, such that minimal actual training is possible in-season and deep aerobic fitness disappears.

Summary
The big takeaway here is that fitness is more than just raw test numbers. Arguably even more important is repeatability.

Ride fast, repeatably, and have fun! 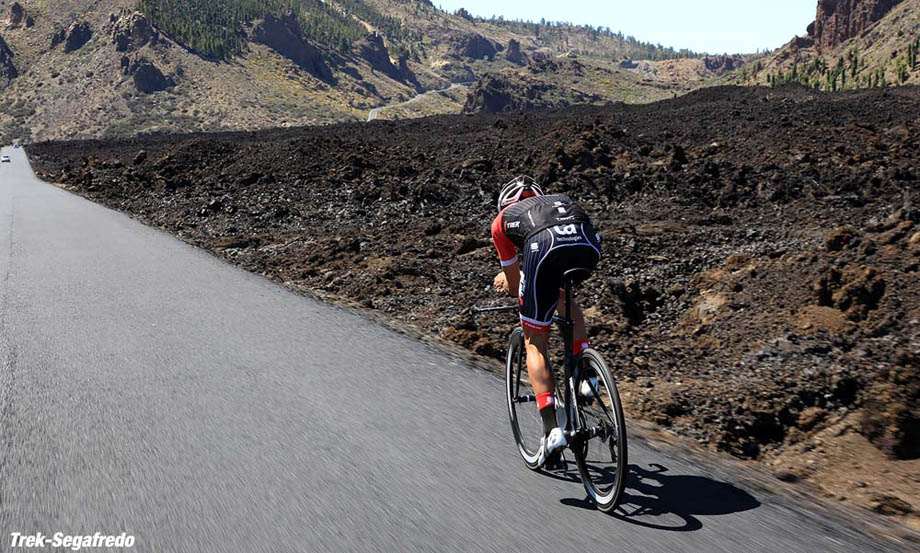 Ed’s Rant: Life According To Norman!