In our last article on filming the “Spring Training In Mallorca” video, we spent some good times traveling the roads of Mallorca – thankfully, there’s still much to be explored, so come along with Ergvideo to get a second helping of some of the best riding you’ll find anywhere in Europe.

Contributed by Paul Smeulders of ErgVideo

Awesome Roads Provide Memories
We cycle for so long, so hard, and so far, that we have the time to form emotional associations with the places and roads encountered. One such road is on this journey, and I am especially excited to leave Porreres and head toward Felanitx. Why is this a special road for me? Really it’s just a rolling, very challenging strip of smooth pavement from A to B, mostly lined with piled-stone walls and orchards. It’s no mountain pass, but it’s tough, mixing fast sections with little inclines that you can gut-out in the big ring before the grade falls back in your favor. It’s got good meat on it.

My attachment comes from the first lone ride I took on Mallorca in 1999, one which I fully expected to hate. I had learned of the passing of my step-father the night before, in my absence. I felt pretty guilty about being away. Flight schedules were just such that I’d have to stay one more day before returning home. I accompanied the CyclingAdventure.com group to a favorite hill-top monastery & restaurant. Not feeling too social, I skipped lunch and asked JL to let me make my way back, solo. He said something like “enjoy your bike, Paul”.

As I headed down the mountain to navigate home, he remembered and yelled: “Order the beer at happy hour, we’ll be there with ya”. Mallorca is well-signed and I found my way to Porreres with ease. I knew already that the road out of town was this tough one, having been kicked around on it by John, Peter and other CA guests in the past. I think I Zenned-out because 53×12 wasn’t big enough. There was no pain at any speed, and I allowed myself to review my memories of my step-father.

I sincerely remember little about the ride itself, but rather I recall emerging from the doldrums back to some peace & comfort, aided by recalling Tom’s sincere and forgiving nature. Oh, and I was still tearing the teeth off my 12. On many trips since, riding south on this road is when I’m best reminded of his essence and spirit. You can’t drop me here. 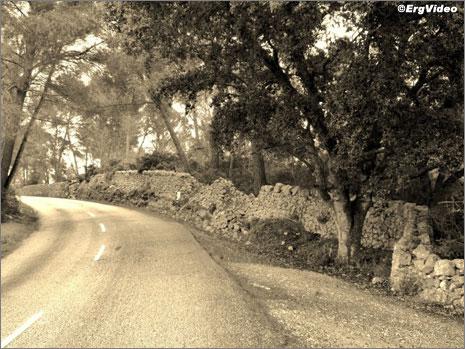 Ancient trees and stone walls built and rebuilt by hand, line the many roads of Mallorca.

Riding it alone once again in 2009 fulfilled every expectation. Despite the weather of the previous week, I was totally in love with this island again. The “Solo Island Crossing” ErgVideo ends with a jam from Felanitx to Cala D’Or. I’ve even included meeting up with Peter in the fading moments of happy hour, raising a pint to my new TFTBR™.

Finding Your Legs With The CyclingAdventure.com Team
Once we’d met up for our week together, the sunshine followed…mostly. Peter and John like to take the opportunity to introduce people to high-quality group riding, and newbies receive expert instruction from them. Because the roads are so lacking in traffic, the terrain near home-base is easy, and because pelotons are so common and accepted by drivers, it is an ideal place to learn group skills with no real surprises, danger, or road raging intolerance.

The next teaching moments occur with a ride up the San Salvador climb, mainstreamed by Marcel Wust’s write-ups in Procycling magazine as an excellent fitness test-climb. Not only is it unrelenting, it is an excellent 20 minute (or so) threshold power test with splendid scenery and plenty of other riders to inspire you.

At the top you can enjoy a cafй, a walk through an historic church, or just look out upon the countryside out to the seashore. Inside the old monastery, you can see the world champion’s jerseys dedicated by Guillermo Timoner, a 6-time motorpacing champ between 1955 and 1965. We were lucky enough to meet him once at his shop in nearby Felanitx, where he was more than happy to show us his trophy room and x rays from his best crashes. 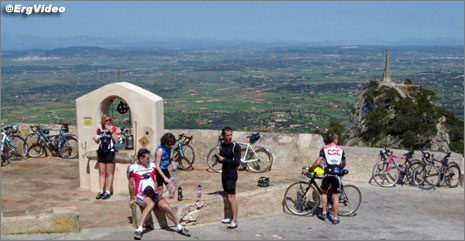 The view from San Salvador is worth the pain. The descent however, is the real reward!

San Salvador serves as the venue for the next CyclingAdventure lesson: descending. It is remarkably twisty and narrow, but not screaming steep nor out of control. It is a whole new level of technical for a North American cyclist. We ride roads surveyed, sighted, graded, and built originally for cars, not donkey-drawn farm carts. For some, technical descending is simply second nature and it’s a thrill. Others find it terrifying: this descent has had a few people crying. It’s a matter of degree for everyone, so it’s worthwhile to practice this descent and learn from these experienced teachers. Many descents on Mallorca are similar; only a few are more difficult. 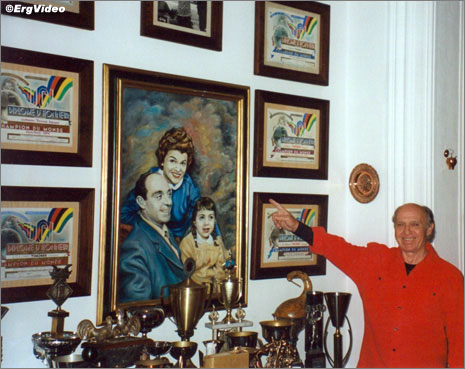 A day of instruction ends with a romp home. The fast guys will hammer on a roller coaster ride back to the coast. It’s fast and seems to have many places to attack, but skilled riders can suck in at least until the final flat section and uphill town sign sprint. We’ve captured most of this fun in an ErgVideo called “Mallorca Tempo and Hills”, where you spend the first hour on a tempo ride with “gruppo rapido”. Then you have your ass handed to you by other riders doing two separate climbs of San Salvador, along with descents for recovery. You’ll see a Rabobank Pro come flying by as well, in case you get a little full of yourself. It ends with an on-the-rivet ride home with Vince and JL. Hold on tight, this is a very difficult ErgVideo edition. 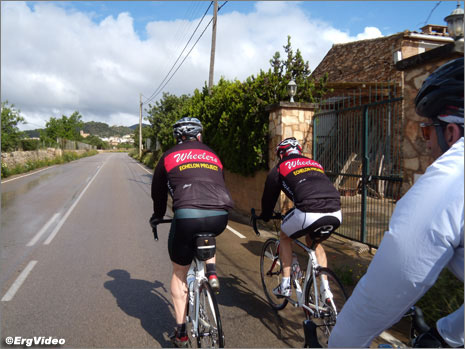 Gruppo Rapido clips along steadily, until the final hour or so. Then you’ll have to hold tight to a wheel.

You Can’t Have A Bad Ride On Mallorca
Subsequent rides are group affairs which eventually divide between gruppo rapido and gruppo relaxo. There are plenty of excellent coffee stops (read that both ways: excellent places to stop for coffee, and places to stop for excellent coffee!), and your guides know them all. Depending on weather and the whims of your group, you could find yourself on the beautiful northern coastline, featuring sheer mountain cliffs soaring up from the sea. A trip to the most westerly Cap Formentor is always a hilly, watery highlight and plenty of other riders will accompany you to the lighthouse. 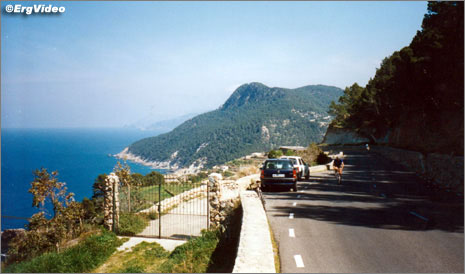 A ride along the northern coastline is breathtaking…physically and visually.

This time around we decided a ride starting from Valdemossa on the north coast, up the highest mountain pass, the Puig Major, and a long ride home would be an excellent hardman session. The north coast has a tourist highway, idyllic towns like Dйia, and magnificent terraced orchards along the way. This route also provides the opportunity to try the famed Sa Calobra, sincerely the coolest descent you’ll ever see. It winds and twists down a deep fjord. This time around we skipped it, having arrived a little bit after the tour busses started heading down. You can get past them easily enough, but having them pass you on your way back up is not particularly pleasant. Observing the bus traffic schedule on “the cobra” is one of the few compromises you make with traffic here. There’s plenty of time in the morning to ride without the buses.

After the Puig we rode along the high ridge, through some dark tunnels, bypassed the Cobra and descended into Selva. The ErgVideo “Climbing Puig Major” includes a long warm-up to he climb. The climb itself is done “over-under threshold” style. It’s variable tempo along the ridge, and a cool-down comes on the descent. “Wheelers Tempo in Spain” picks up from there and is a steady tempo ride with my West Quebec Wheelers club mates, across the island from the mountains to the south coast. The weather changes considerably, and the final kilometers are once again, on-the-rivet fast. Of course, the town-sign sprint means everyone blows by the guy who did the final 10km of eye-balls-out pulling. That’s just his punishment for going way, way too fast for way, way too long. 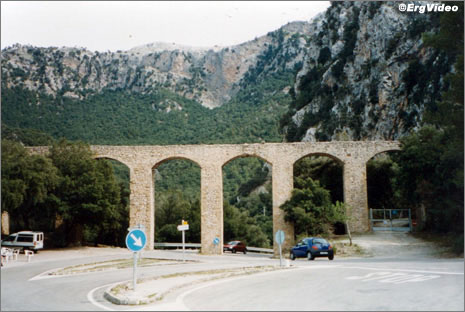 An aqueduct emerges from the high cliffs along the road to Lluc, marking the famous turn to the Cobra.

Forge Your Own Tales
Tales from the Big Ring™ endure because our memories are etched deeply by intense experiences, whether it’s from the pain and suffering of climbing or the euphoria of descending a serpentine road in a rocky chasm, chasing after gruppo muy rapido. They are the raison d’кtre of the sport-cyclotourista experience. A trip to Mallorca with the boys from CyclingAdventure.com is a great way to add more vivid tales to your repertoire, and you can use the ErgVideos in the “Spring Training in Spain” series as a preview!

The adventures continue next time in an as yet undisclosed corner of Europe – but for now we’ll let you get back to work. And if you haven’t already, check out our reviews of ErgVideo’s awesome collection of training dvds, and see their website at: ErgVideo.com

Ale Looks Back: 10 Pictures For 10 Years