For several years now, Scott Daubert has been the US Postal team’s go-to guy for anything Trek bike related and more. If you’ve seen OLN’s Lance Chronicles you’ve seen Scott in the thick of things in the University of Washington’s Kirsten Wind Tunnel or roadside with Steve Hed dialing in Lance’s time trial bike.

Scotty’s bike racing roots go way back. In fact, he and I have duked it out on several occasions with him getting the better of me over the final barrier in a cyclocross race the last time we raced. I was fortunate to catch up with Scott with a few time trial related questions before he left Colorado for the Tour de France.

MAKING LANCE FASTER
Pez: You’ve been part of arguably one of the most cutting edge projects ever undertaken in cycling science: to make Lance “go faster”. What have you learned from the F1 project that the average cyclist can use to turn in faster time trials?

Another lesson learned is that the aerodynamic difference between good and better is very hard to perceive. Often the difference is so subtle you wouldn’t know one is better than the other without seeing comparative data. This being said, often the best set up is what feels best, not what the numbers say is best. 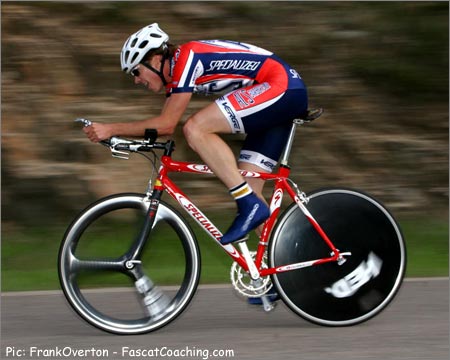 Frank “Fascat” Overton on his way to a bronze medal at the 2004 Colorado State TT Champs. Either that, or else he’s motoring to the store to satisfy his wife’s late-pregnancy cravings!

Pez: You yourself are an incredibly accomplished racer and have been spotted this year at the Cherry Creek time trial series in Denver and also at the Tour of the Gila. Tell us about your time trial setup and special aerodynamic considerations you yourself applied in those time trials.

SD – Every TT I did this year was in windy conditions. At the start of most of those races I heard comments about how much the wind was affecting either the control of the bike or how slow the riders felt. I tried to put what we learned in the tunnel to work for me. I used all the high profile gear I had to try and maximize the sail affect. Sometimes the 3 spoke front and disc were a handful in crosswind gusts but I felt like those higher profile components gave me an extra push from time to time. Those pushes gave me good morale and I think having a good head is the best way to have satisfying results.

Pez: You obviously have an armada of equipment to choose from for time trialing. Are there certain “givens” that one should try to adhere to for their TT bike set up?

SD – I think hand, forearm and shoulder positions are critical so a good TT bar is important. I also believe a 3 spoke front and disc rear is fastest in nearly every situation, regardless of crosswinds. Equipment aside, comfort is pretty important but time trial events hurt no matter how much you prepare. I found I had to give up some comfort to maintain an aero position and I had to give up some aerodynamics to be comfy. It takes time to find a happy medium.

Pez: Along those same lines there are many, many choices out there for aerodynamic equipment each with their own marketing claims: aero helmet (or not), forks, frames, wheels, bars, clothing, etc… Now that you’ve spent time in the University of Washington’s Aeronautical Laboratory can you help us make sense of it all?

SD – Roughly 70% of the drag numbers we saw in the tunnel are rider and position related. The remaining 30% is the bike. How you sit on the bike, where your hands are and how much time you spend optimizing your aero position is where you make speed. If you fidget or stand up a bunch, you lose time and speed, so being as comfy and fast when seated is important. As for helmet, shoe covers and clothing, I hope Giro and Nike release some of that technology to consumers. We measured less drag with aerodynamically designed pieces so I know it makes a difference.

Pez: Tell us about some of the “aerodynamic trends” that the average Joe should take to the start line.

Pez: One often overlooked aerodynamic consideration is a rider’s clothing and the type of fabric it’s made from. Most time trialists know to use a skinsuit but beyond that can you tell us about the technology the F1 project is using for Lance and the Postal team?

SD – Exactly how Nike’s Swift technology works is best found on their website but I can explain what we did with it in the tunnel. For the most part you want air to remain as close to the subject as possible. By varying types of textures or the orientation of textures you can start to control some of how the air flows over the subject. We wanted air to remain attached to as much of Lance’s body as possible, especially on the trailing side of his hips. To do this Nike used certain fabrics in that area and even went as far as developing a new way to “hide” seams joining two pieces of fabric. Most skinsuit fabric is faster than shaved skin, believe it or not, so if you can stand to be hot, cover as much of your body as possible. Unfortunately, the UCI won’t allow some of the stuff Nike developed but we still have a fast package.

Pez: What about a rider’s aerodynamic position? Knowing what you know from wind tunnel testing how can he or she optimize their position without going into a wind tunnel?

SD – Simple rules still apply. Low shoulders, parallel forearms, flat back and remaining still top the list. We found putting Lance’s elbows in front of his knees provided adequate aerodynamics without discomfort so we opted for that position. Lance’s seat position is no more than a few millimeters farther forward on his TT bike than his road race bike so I don’t have an opinion on the traditional triathlete seat-forward approach.

One way to find trends is to do roll down tests. Steve Hed is a big fan of this. You’ll need a calm day, a friend on his bike to be the control and a gradual hill 1-2 minutes long. Coast top to bottom next to your friend and make a note or time the difference between the two of you at the bottom. Make one change to your position or equipment and do it again. Make sure your friend doesn’t change anything – he’s the control.

Frank is a USA cycling certified Expert coach, category 1 road racer, and bronze medal winner in the 2004 Colorado State Time Trial. To find out how you can time trial at your best visit his website
FasCatCoaching.com.