** NOTE: Read how First Endurance has upped the Science in their new EFS Hydration drink mix in our interview with their Chief Science Officer Dr. Luke Bucci here.**

You know the sports drink market is becoming a marketing fad when even Kool-Aid is plugging a sports drink in the supermarket aisles. But one company that continues to base their products on science rather than marketing is First Endurance, and their long-awaited Electrolyte Fuel System (EFS) adds to their arsenal of innovative racing nutrients.

Not ANOTHER Sports Drink
As a physiologist who did his Ph.D. studying hydration during heat stress, it can really get ridiculous wandering down the aisles at the supermarket. When it’s not fancy water that costs more than the petrol I pump into my car, it’s an aisle loaded down with sugary drinks masquerading as sports drinks. It seems that our original scientific message of ensuring adequate hydration during exercise has become so popular and “diluted” (sorry, couldn’t resist) that everybody has a bottle of sports drink surgically attached to their hip now. As a result, my personal suspicion is that many everyday people are actually adding unnecessarily to their caloric intake and doing themselves more harm than good.

So with this glut on the market, why would First Endurance bother locking horns with big multinationals like Pepsi (owners of Gatorade) and introduce their own sports drink?

Focused on the Market
As Mike Fogarty, founder and VP of Sales and Marketing First Endurance, explains, they already had highly regarded products like the supplement Optygen and the recovery drink Ultragen in their stable, and the last thing they were thinking was to introduce a sports drink. “For a few years, we really resisted the push to introduce a sports drink because there were so many other drink mix options already available. However, our customers and sponsored athletes kept telling us the existing drink mix options didn’t address their unique needs and requirements. Our customers are serious and elite endurance athletes. They need a drink that helps them push the limits of endurance in long races, intense heat and other extreme conditions without cramping or dehydration. So that’s what we set out to develop.”

Feedback from First Endurance athletes and customers was that they found the existing products way too sweet, and that they were having serious issues with cramping and dehydration. In addition, they were really interested in amino acids, especially branched chain amino acids. “That’s the terrific thing about working with a focused group of athletes like our sponsored pros and also our other customers. They’re very educated about sports nutrition, and they provide us with excellent ideas,” notes Fogarty.

Check the Label
Energy: the primary role of a sports drink is to provide energy during exercise, plain and simple. You’re not trying to have delayed release of energy here, so the aim is to have a high-glycemic index source of carbohydrate in such a concentration that it empties from the stomach and is absorbed into the bloodstream as rapidly as possible. EFS follows this principle by using a 7% solution that is within the established 6-8% ideal for absorption. They also use three carbohydrate sources of complex and simple sugars, speeding up absorption into the bloodstream compared to a single source of simple sugar.

Endurance: Beyond carbohydrates and electrolytes, the next frontier to sports drinks appears to be amino acids (the building blocks of proteins). Its inclusion, as demonstrated in a recent study comparing two popular sports drinks (one with, one without proteins), appears to benefit endurance. The mechanisms by which this occurs remains unclear, but one possibility is that particular amino acids, especially the family of branched-chain amino acids (BCAA), may alter or dampen the effects of tryptophan, a neurotransmitter that has been linked to mental fatigue during exercise. EFS opts for focusing on the amino acids glutamine, leucine, iso-leucine, and valine in fairly substantial doses for ease of absorption rather than bigger protein molecules.

Electrolytes: EFS has focused on two issues with electrolytes: 1) incorporating five (calcium, magnesium, chloride, sodium, potassium) rather than primarily sodium, and 2) increasing the amount of electrolytes compared to most drinks on the market. The thinking at First Endurance is that they’re aiming at the endurance athletes who are performing prolonged and/or exhaustive exercise, and need the higher levels of all electrolytes to replace that lost through sweat. EFS contains the highest electrolyte content available (1160mg of all 5 electrolytes/serving). Because of this, First Endurance states there’s no need to carry those extra electrolyte pills or add anything else to the EFS drink mix. 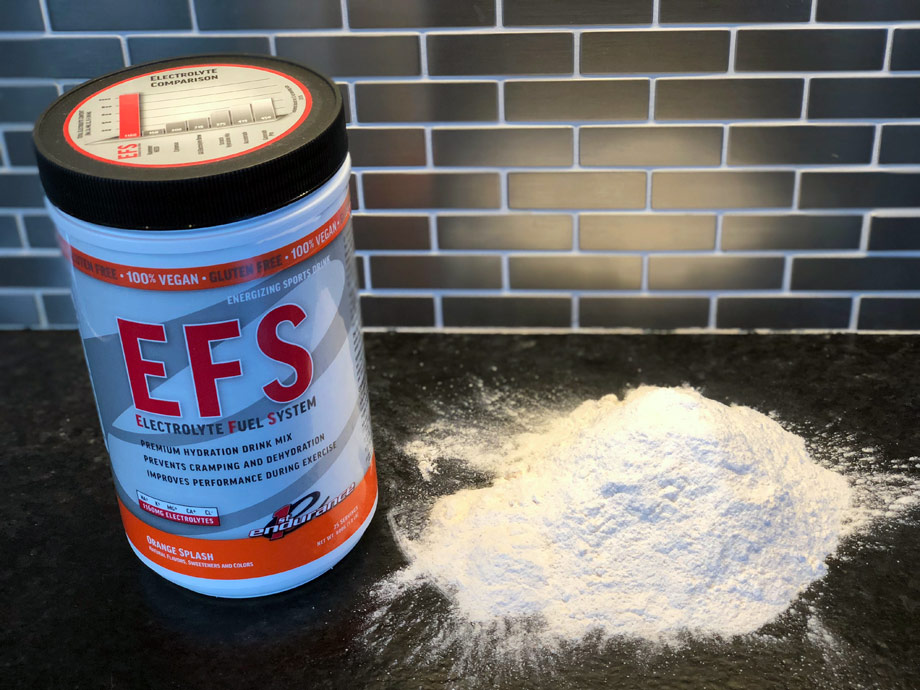 A Conversation with Rob Kunz
After trying out EFS, I had the opportunity to talk with Rob Kunz, VP Research and co-founder of First Endurance about their ideas behind EFS.

Rob Kunz: EFS is designed to be the foundation of your nutritional strategy regardless of the distance. In races of 3-4 hours or less, athletes can certainly use EFS exclusively with great success. As this time increases so does the caloric requirement. We still recommend EFS be used for long races though it’s also necessary to supplement with additional foods, gels or other higher calorically dense foods. Through our work with Ultra Distance Runners who frequently race for 24 hours or more, we’ve been able to ‘test’ EFS under the most demanding circumstances and found it to work perfectly.

Pez: How should EFS be combined with other nutritional strategies during exercise (e.g., energy bars, water, gels) if at all?

RK: Ideally EFS should be the foundation of your energy supply. Races of 3-4 hours or less you can use EFS exclusively. As the time increases adding EFS Liquid Shots, a bar or food serving once every 90-120 minutes seems to work well. In fact many athletes like to use Ultragen (320kcal) as their high calorie supplement during long races. A number of our professional cyclists use a serving of Ultragen with 60 minutes to the finish of a stage. This helps set up their finish and begins their recovery process.

Pez: EFS does NOT contain Vitamin C anymore. Why did First Endurance decide to remove this antioxidant from EFS?

RK: We removed Vitamin C from EFS because the latest research shows that Vitamin C can have a negative effect on endurance and performance when consumed during exercise. There is a growing body of literature which supports the NEED for free radicals during exercise in order to enjoy the benefits of training adaptations. Reactive oxygen species have been shown to serve as a signal to promote the expression of skeletal muscle proteins, mitochondrial proteins, and heat shock proteins. Oral supplementation of Vitamin C has been shown to blunt the body’s natural ability to fight inflammation thus further limiting overall training adaptations. Furthermore, evidence suggests that endurance training promotes increased endogenous antioxidants in muscle fibers increasing the natural level of protection against exercise-mediated oxidative damage. Finally, it has been reported that vitamin C prevented expression of transcription factors which are involved in biogenesis which is consistent with the previous suggestions that vitamin C supplementation reduced training-induced adaptations. According to Braakhuis et al. (2013) training status appeared to have a greater impact on antioxidant mobilization after exercise than diet in elite athletes.

Pez: How has feedback from your sponsored athletes and EFS users changed the product if at all?

RK: The input and feedback from our athletes and customers was instrumental in the development of EFS. They changed our thinking by showing us that the other drinks on the market were missing important components. And because of this, they were having issues with cramping and dehydration. The great thing about EFS is that when athletes try EFS for the first time, they notice the benefits almost immediately.

We’ve gone much further than simply supplying carbohydrates and sodium. The inclusion of all five (5) electrolytes, malic acid and high levels of Amino Acids really puts this drink in its own category. At First Endurance we strive to be innovative with our product development and we have certainly done this with EFS.

But Does it Work?
There are two completely different but equally important considerations when deciding whether a sports drink works:

1. Does the science make sense? In the case of EFS, the balance of evidence seems to support the product. The inclusion of branched chain amino acid has scientific potential to improve endurance. The great thing about the First Endurance philosophy is that they base their products first on scientific merit. As they write, they don’t believe in putting “pixie dust” levels of an ingredient simply for marketing.

2. Will you drink it? Just like bike fit, the best drink is useless if you can’t stand the taste. Taste is a personal thing, but I found it very easy to drink in that the flavouring (tangerine or lemon-lime) was not so strong that it gets overpowering or tiresome with repeated use. It certainly was not as sticky sweet as some other sports drinks I have tried, and actually felt like I was drinking something substantial. I found that the suggested amount was easy to drink on both cool and hot days, whereas I typically dilute other drinks to avoid the sweetness.

Summary
Overall, I have to really give high marks to First Endurance. The research into their products is really extensive and based first on science rather than marketing. They do not pretend to cater to the mass market, so you’re not going to see them crowding the supermarket aisles or being used in aerobics classes anytime soon. The company aims squarely at the endurance athlete market, designing products according to their needs and selling directly on-line or via dealerships also committed to the endurance athlete. The introduction of EFS is a terrific addition to their stable of products. It is scientifically sound and tastes much better than the majority of sports drinks I have tried.

• GET 20% OFF your first order at www.FirstEndurance.com
Sign-up for their VIP/Rewards program and get 20% off your first order.  You’ll also receive their free newsletters on sports nutrition topics and exclusive offers.

Disclosure Statement
First Endurance provided a free sample of EFS for this review.

Stephen Cheung is an Associate Professor of Kinesiology at Dalhousie University in Halifax, Nova Scotia, Canada, with a research specialty in the effects of thermal stress on physiology and performance. He can be reached for comments or coaching inquiries at [email protected].