In the world of cycling, as is the case elsewhere, smart or glamourous marketing can often overwhelm a technically superior product. The other way to compete is with a tightly focused concentration on developing the best possible products for endurance athletes. First Endurance EFS Energy Bar is a clear proponent of this strategy, adding to their burgeoning arsenal of top-notch sports nutrition products.

Like the sports drink market, the energy bar market has become saturated in the past decade, with stacks of different “energy” bars crowding the supermarket aisles. Most of them are mass produced to catch the “healthy eating” marketing wave, even though they’re often designed for the couch potato and loaded with fat. To compete, serious energy bar companies often face the dilemma of riding this marketing wave or basing their product and marketing strictly on their technical merits. 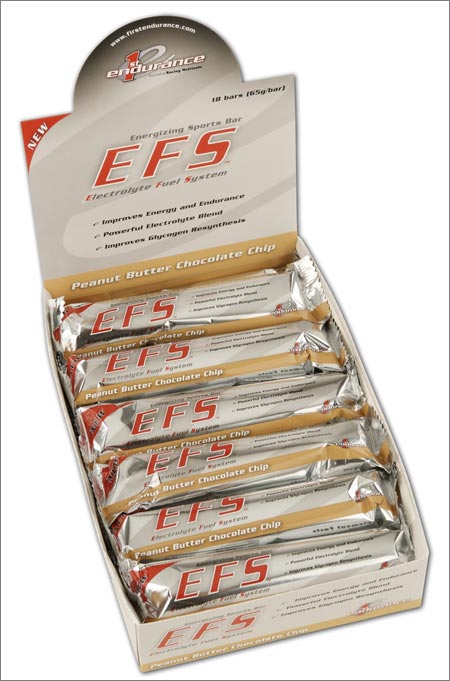 Putting Their Money Where Your Mouth Is
One player making progressively bigger steps into the world of sports nutrition has been the Salt Lake City-based First Endurance. From its initial startup by two hard-core endurance athletes, the company has expanded year by year in both product line and market reach. What is impressive is that, at the same time as experiencing rapid growth, the company has remained uncompromisingly true to its original philosophy – to develop products that are catered specifically to maximize the performance of endurance athletes.

The product line has expanded year by year, each dedicated to be the best technically rather than beginning with a price point in mind. Beginning with their supplement Optygen, First Endurance has followed up with a recovery drink (Ultragen), exercise drink (EFS), and multi-vitamin (Multi-V). The other thrust of the company is the development of a sports nutrition system rather than products in isolation. In this way, while still valuable solo, the real strength of the products become maximized when used in concert with each other.

The success of this core philosophy and target is evident in their rapid acceptance in the pro ranks over the years, including individual riders (Dave Z, Levi Leipheimer, Freddy Rodriguez) and teams (Gerolsteiner, Discovery Channel, Kodak Gallery, Navigators, T-Mobile women’s team). You will notice that the sponsorship list is heavy on endurance athletes and low on celebrities with no discernable talent. At the same time, their relationship with sponsored athletes is highly synergistic, with a heavy reliance on sponsored athlete input and feedback during the development and testing phases.

Next Course on the Menu
I have tried and tested a number of First Endurance products before, and the latest on the menu for me is their newly-released EFS Energy Bar. It’s not a coincidence that the bar shares the EFS (Electrolyte Fuel System) moniker with First Endurance’s during-exercise drink system, as the two are designed to be used in complement with each other. Currently available only in a chocolate-peanut butter flavour (infinitely preferable to Albatross flavour!), the EFS bar is designed to give athletes a choice in energy intake during prolonged workouts rather than just taking in fluids. Therefore, many of the nutritional considerations and primary ingredients are similar between the EFS bar and drink. 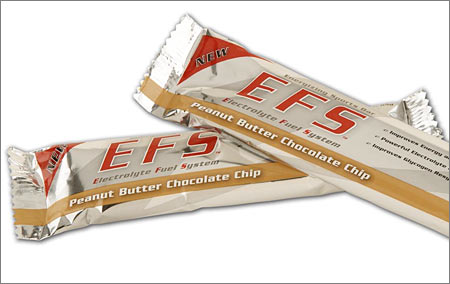 Peanut Butter chocolate chip is the first flavor launched, but we expect more to soon follow.

In the Kitchen with FE
We had a talk with Robert Kunz, senior VP Research of First Endurance, on the genesis of the EFS bar, how it fits into their sports nutrition system, and their relationship with sponsored athletes.

Pez: You have the EFS drink designed for fueling during exercise and the Ultragen recovery drink. What prompted the development of the EFS bar and how does it fit scientifically in your product line?

Robert Kunz: The EFS bar is actually a long-time coming. We’ve been researching endurance bars for a few years now. The dilemma for us, though, was that our sponsored athletes wanted us to develop a special recovery drink first (Ultragen), a during-exercise drink second (EFS) and then a during-exercise bar after that. We still looked into the endurance bar concept, knowing we’d eventually be getting into the bar market.

This year, we had an overwhelming number of requests from our athletes to develop a special endurance bar. Not just a “me too”, but something that was unlike anything else that’s currently on the market. Because we had been looking at bars for a while, our research and development team had accumulated a lot valuable knowledge and had some really good ideas on how to formulate a bar that would maximize performance while exercising.

Pez: What were your main nutritional considerations in designing the EFS bar?

RK: This was, no doubt, the most challenging product to design. Developing a bar that has a desired nutritional profile AND meets the scrutiny of consumers in taste, texture and performance can be very difficult. Again, with the help of our athletes we accomplished just that. The primary nutritional objectives were:

1) Carbohydrate blend with complex carbohydrates as the primary source.
2) All natural.
3) Fortified with over 1000 mg of all 5 Electrolytes (sodium, potassium, calcium, chloride and magnesium)
4) Fortified with 2000 mgs of Amino Acids (Glutamine, Leucine, Iso-Leucine and Valine)
5) Organic where possible (30% of the formula is certified organic)
6) Limit fat to 6g or less
7) Limit fiber to 3 g or less
8) Must perform well in cold and heat (IE: no chocolate coating)

Pez: So then how does the EFS bar fit with EFS drink and Ultragen? How do you recommend the usage of the EFS bar with your other products in training and competition?

RK: Ultragen is our recovery drink designed to be used right after exercise. EFS drink mix is our during-exercise drink mix. The new EFS bar is designed to be used while exercising and should be used to complement the EFS drink. The EFS bar provides 250 calories, 10 grams protein, 40 grams carbohydrates and 6 grams of fat. Many of our sponsored runners, cyclists and triathletes have a minimum of one training session or race every week that lasts more than 4 hours, some do this daily. These longer exercise bouts can be difficult to do with only liquids and lots of people simply prefer a bar.

The EFS bar provides easy to digest energy and delivers 250 high-quality calories. The carbohydrate source is an ideal mix of complex carbohydrates and simple sugars. Like the EFS drink, the EFS bar delivers all five electrolytes and 2000 mg of amino acids per serving. In addition, EFS bars and drinks are extra convenient because both provide the advanced levels of electrolytes required by endurance athletes. So there’s no longer the need to supplement with additional electrolyte pills or add anything else to your bottles.

The entire First Endurance product line is developed as a complete system.
The EFS bar was developed to compliment the EFS drink during exercise. The ingredients in the bar are similar to the drink but provide essential during-exercise benefits utilizing a different delivery system. People want alternatives, and we are currently developing a unique EFS liquid shot to expand the First Endurance during-exercise product mix.

Pez: Discuss how the EFS bar has progressed through its development. What has been the feedback from your sponsored athletes and how has it been incorporated?

RK: The First Endurance sponsored athletes play a big role in the direction and development of each product. We’re not the type of sponsors that work with athletes just for the glory or prestige. We solicit constant feedback from our athletes and use this feedback to determine what products should and should not be in the First Endurance line up. Simply put, we could not have developed any of our products or grown to our present status without our athletes.

Well over a year ago, we started with what’s called a paper formula. Our Endurance Research Board and athletes analyzed nutritional profiles and helped pinpoint the most important objectives, which were then used as the template in the lab until an acceptable formula was developed.

Next came a run of prototype bars which were tested by the Gerolsteiner Professional Cycling Team, the Sierra Nevada PCT and Dave Zabriskie during the 2006 Tour of California. Our pro triathletes and runners also tested this prototype in their respective workouts and races during the same time period. The February 2006 prototype bar received excellent reviews in terms of flavor and texture but fell just short on some nutritional attributes. We took this feedback and went back to work. Various bars were produced and tested through the 2006 racing season until the final version was developed in October of 2006.

Pez: It can be argued that the energy bar market is a bit saturated. Why did you develop an energy bar and what makes the EFS bar unique from the competition?

RK: The First Endurance athletes help guide the products we develop. Even though the energy food market is saturated our athletes clearly felt there was a need for a better performing bar. The bars they were using fell short on one or more of the primary nutritional objectives. What makes the EFS bar truly unique is it delivers all 5 electrolytes and 2000 mgs of amino acids per serving, making this bar superior to all others as a during exercise bar.

On the Test Plate
Taste is a highly personal matter. My preference for 80s music makes my lab members cringe (but it also makes them work extra hard so that they can finish ASAP!), while rap and hip-hop drives me bananas. Therefore, what works for one person simply may not come close for another.

With both the EFS drink and Ultragen, I’ve simply loved the flavour, finding them easy to drink without being too heavy or strong in taste. However, I’ve also had some opposing comments from friends trying them. With the EFS bar, I found it to be closer in texture and firmness to the older-style PowerBars, thicker and stickier than Clif bars. Out on the road, it’s meant for rapid consumption rather than a gourmet meal, so the sticky texture is needed to prevent it from turning to mush stuffed into a jersey pocket. However, make sure you have water or EFS nearby to help wash it down.

Summary
I really have to give full marks to the folks at First Endurance, in that I think they’re really going at developing a sports nutrition company the right way. They’re huge proponents of full disclosure of information and educating their customers. This includes an Endurance Research Board that helps them with product development, free monthly e-newsletters on different sports nutrition topics, and detailed reference lists supporting their claims and products. They also are strict adherents to quality control and the prevention of product contamination, with independent sample testing and auditing of suppliers.

The addition of the EFS bar to the First Endurance stable of products is the next natural evolution in the company. If you’re a serious endurance athlete who wants the best possible sports nutrition products, definitely give First Endurance serious consideration.

About Stephen:
Stephen Cheung is an Associate Professor of Kinesiology at Dalhousie University, with a research specialization in the effects of thermal stress on human physiology and performance. He can be reached for comments at [email protected].