Proper and appropriate hydration on the bike is a critical component of sports nutrition. First Endurance EFS-PRO is the newest version of the brand’s category leading EFS hydration product.

The world of hydration research continues to evolve. In the 1970s when the first sports drinks came out, the priority was on replacing the limited carbohydrate stores in the body along with the loss of electrolytes through sweat. Over the first decades, science came to a fairly consistent consensus that a sports drink of about 6 to 8% carbohydrate concentration provided the best balance between carbohydrate delivery on the one hand and gastric emptying along with intestinal absorption on the other hand.

Even though sports drinks have gained a firm place in the nutritional toolbox of cyclists, the overall degree of satisfaction has been quite low. Chief among the complaints include the highly sweet taste of many drinks. When consumed in very large quantities as we tend to do during long rides and especially in the heat, that sweetness can very rapidly become tiresome. At the same time, cyclists often complained of a sense of bloating and gastric distress. This is likely brought about by the slowing of gastric emptying due to blood to the G.I. tract being diverted to the active muscles and to the skin for thermoregulation, combined with the relatively high osmolality of existing drinks.

Therefore, over the past decade, companies have started developing sports drinks that are relatively low in osmolality to permit better gastric emptying and intestinal absorption. To still enable adequate carbohydrate delivery, high-end sports drinks are now utilizing different forms of carbohydrates compared to the relatively simple glucose and fructose mixtures of the past. 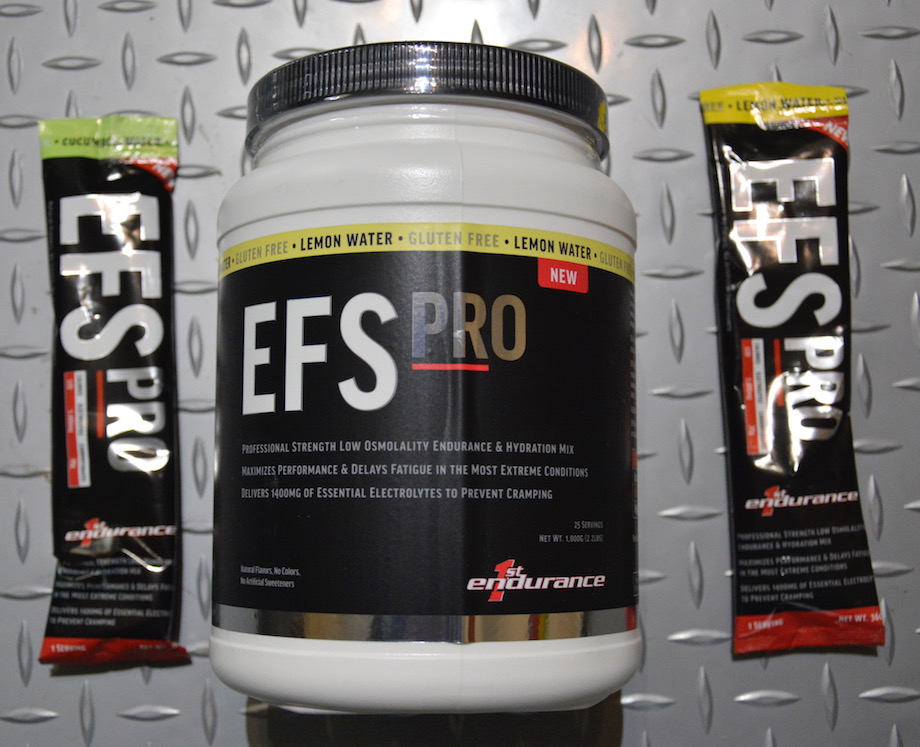 EFS-Pro
First Endurance has developed a “Pro” version of their EFS hydration mix. EFS-Pro is produced in limited quantities, and are primarily geared towards elite endurance athletes. That means that their formulation is different, catering towards the higher training volumes and intensities of this demographic.

Analysing the ingredient list of EFS and EFS-Pro, one important distinguishing feature is that it does NOT contain vitamin C (ascorbic acid). Their removal is largely based on a seminal 2014 study in the very prestigious Journal of Physiology that, to my knowledge, is the first to have a double-blind (neither the participants nor the experimenters knew who was getting the experimental 1000 mg of vitamin C or 235 mg of vitamin E), randomized, controlled study focusing on well-trained endurance athletes (Paulsen et al. 2014). I’ll save the detailed examination of the study for a future Toolbox article, but the key findings were that the vitamin group had similar performance gains but overall decreased cellular biomarkers of endurance adaptation in the mitochondria.

This was supported by another research group (Morrison et al. 2015), who also performed a double-blinded, placebo study. They found that both the supplementation and placebo groups had similar improvements in aerobic capacity. There were no effects of vitamin C&E on markers of oxidative stress following exercise, but the supplementation group had lower cellular markers of skeletal muscle training adaptation.

Other interesting features of EFS-Pro include:
EFS-Pro utilizes a cyclic cluster dextrin and has an ultra-low osmolality. This helps to achieve the goal of minimizing osmolality for rapid emptying absorption while optimizing carbohydrate delivery.

EFS-Pro contains L-Alanyl L-Glutamine because clinical research shows it helps shuttle water and minerals through the gut more effectively. This is important in that EFS-PRO will still work effectively even at concentrations above a 10% solution. Indeed, EFS-PRO can be mixed in varying strengths (e.g. 2-4 scoops per bottle) to obtain 80-160 calories and total electrolytes of 933-1866 mg while maintaining an osmolality of 240-340 mmol.

Overall, EFS-Pro seeks to optimize intestinal absorption and maximize nutrient delivery, all while maintaining low sweetness in order to maintain palatability throughout long and/or hot rides. In comparison, other low-osmolality drinks achieve this by lowering calories to a concentration (~4%) that is not enough for athletes to train and race on. 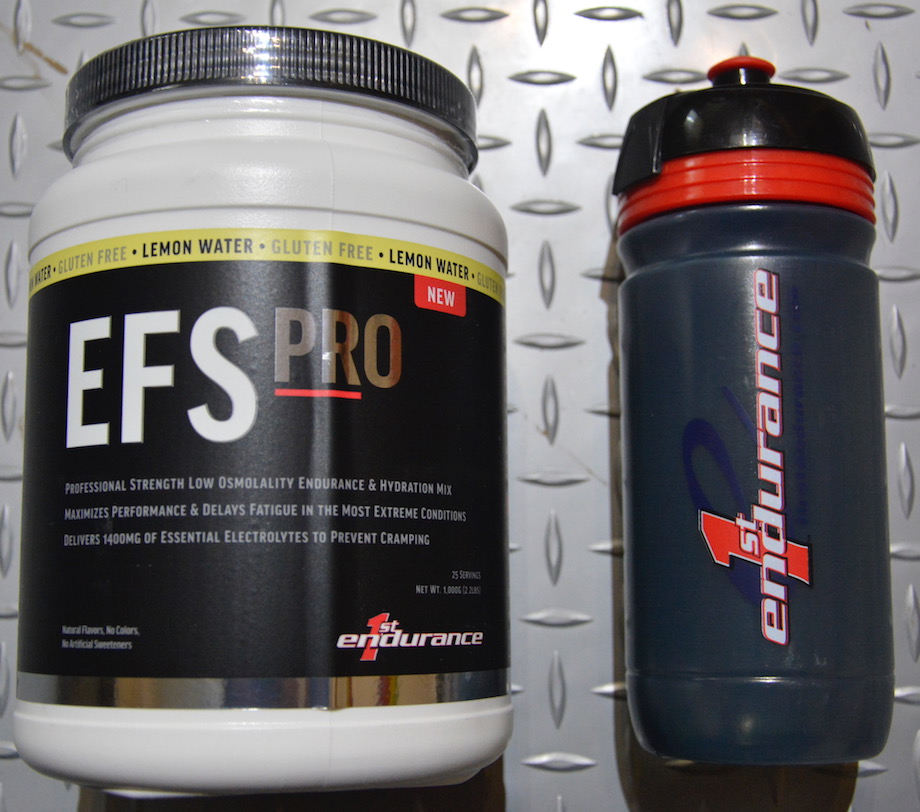 Using EFS-Pro
In mid-February, two friends and I staged a 12-day private training camp in Temecula, California. Our plan was to simply log lots of steady hours, with lots of climbing thrown in. Again, while none of us will ever be anywhere near professional in ability, this was still as “pro” as we were going to get in terms of volume and dedicated cycling time.

For the 12 days, we had 8 days of very hard training that averaged about 180-250 TSS each, with about six of those days hitting over 1500 m elevation gain.

For all three of us, these were literally our very first outdoor rides of 2017, with my two previous months of winter training all done indoors and at most about 90 minutes each. So this was definitely a huge jump up in volume and chronic workload. It was not extremely hot, with temperatures averaging between 10 to 15°C and cooler up in the mountains, but it was still certainly warmer than the 2°C in my garage!

Overall, with each of us using EFS-Pro along with water for our hydration, and combined with traditional ride food such as bananas, gels, and bars, none of us ended up bonking or cramping at any point during the camp. None of the rides got aborted or prematurely shortened because of fatigue.

I did appreciate that EFS-Pro had a very light and low-sweetness taste with both the ‘lemon water’ and ‘cucumber water’ flavours, such that I did not get tired of the taste over the course of any ride.

Summary
There are now a number of low osmolality sports drinks out on the market catering to endurance athletes. I have long appreciated First Endurance’s approach to developing scientifically-derived sports nutrition products, and had a very positive experience with EFS-Pro during a very high-volume and hilly training camp.

Check out the First Endurance website for product information and detailed scientific background into their formulation, and my previous review of their MultiV-Pro nutritional supplement.

• GET 20% OFF your first order at www.FirstEndurance.com
Sign-up for their VIP/Rewards program and get 20% off your first order.  You’ll also receive their free newsletters on sports nutrition topics and exclusive offers.

Note also that all First Endurance products come with a 100% product satisfaction guarantee across their entire line, with full refund otherwise.

Stephen Cheung is a Canada Research Chair at Brock University, and has published over 90 scientific articles and book chapters dealing with the effects of thermal and hypoxic stress on human physiology and performance. Stephen’s Cutting-Edge Cycling, a book on the science of cycling, came out April 2012, and the new “Cycling Science,” with Dr. Mikel Zabala from the Movistar Pro Cycling Team, will be published in late June 2017. Stephen can be reached for comments at [email protected] .