** NOTE: Read how First Endurance has upped the Science in their new EFS Hydration drink mix in our interview with their Chief Science Officer Dr. Luke Bucci here.**

I have previously tested a variety of First Endurance products in isolation, but in preparation for gravel races earlier this year, I used a suite of their products. This started with their new Optygen-HP supplements, and included their EFS drink mix, EFS Liquid Shot, Ultragen recovery mix, and Pre-Race capsules.

One of my very first Toolbox articles, all the way back to 2002, was on the pitfalls and dangers for individuals considering dietary supplements. More recently, these themes were repeated in an IOC consensus statement about supplement use in sports (Maughan et al. 2018). So the message is clear and consistent – do your research on both the supplement and the company selling it.

Credibility First
First Endurance has been a leader in sports nutrition designed specifically for endurance athletes since 2002. Their target was never to be stocked in every grocery store or vending machine, nor was the company ever focused on gym rats or ball sports. Through the years, I’ve appreciated this singular focus, as I think it permits them to keep the focus purely on the specific needs of endurance sports. 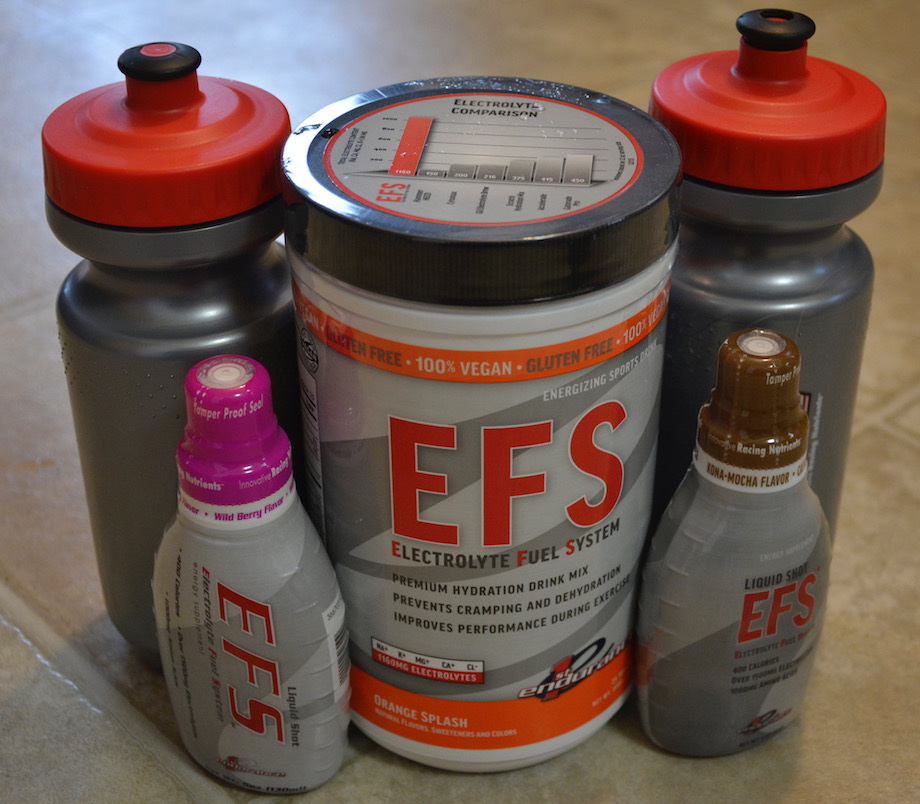 In my previous review of First Endurance products, I’ve gone into details about why I have confidence in their products, but these highlights include:

• I have also appreciated their commitment to validated scientific research as the primary driver behind their products, along with their transparency about the scientific rationale for their product design.

• Their products also are updated to match the latest research.

• Their fanatical devotion to negate the risk of banned substance contamination, which I’ve always pegged as one of the biggest risks with most supplement companies and products.

• They have a 100% product satisfaction guarantee across their entire line, with full refund otherwise.

Optygen HP
While we first saw the Optygen HP supplement back in mid-2018, it has recently been updated with the adaptogenic herb ashwagandha.  As a complement to their existing Optygen (“OPTimize + OxYGEN”) supplement, this is not meant to be a daily multi-vitamin (they have the Multi-V and Multi-V Pro for this). 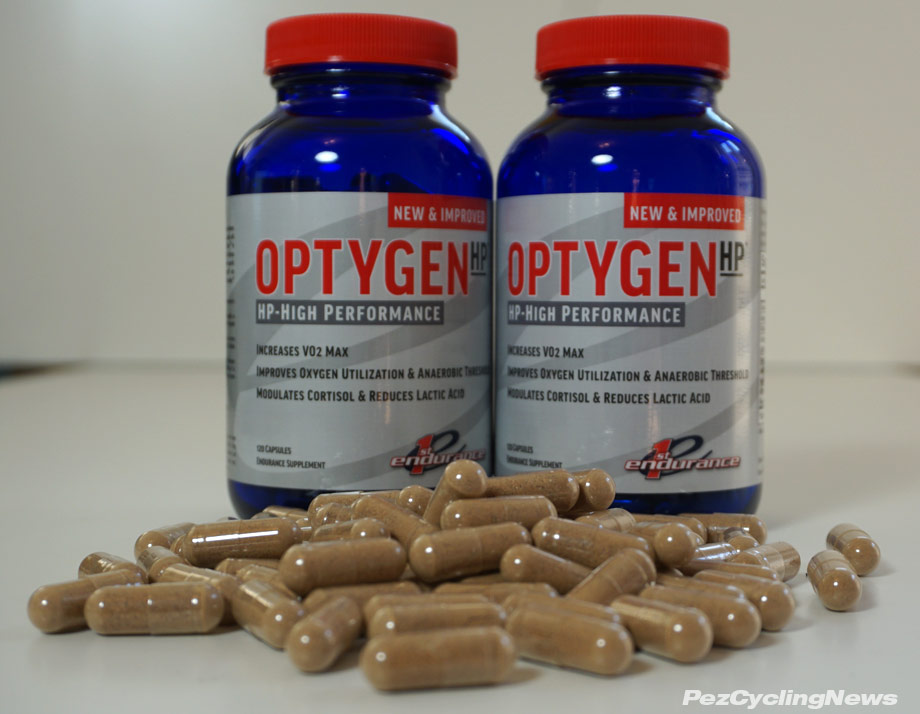 Rather, Optygen HP is mean to be taken in conjunction with periods of intense training, specifically to help you adapt to these periods of heavy strain on your physiology and capacity to recover. 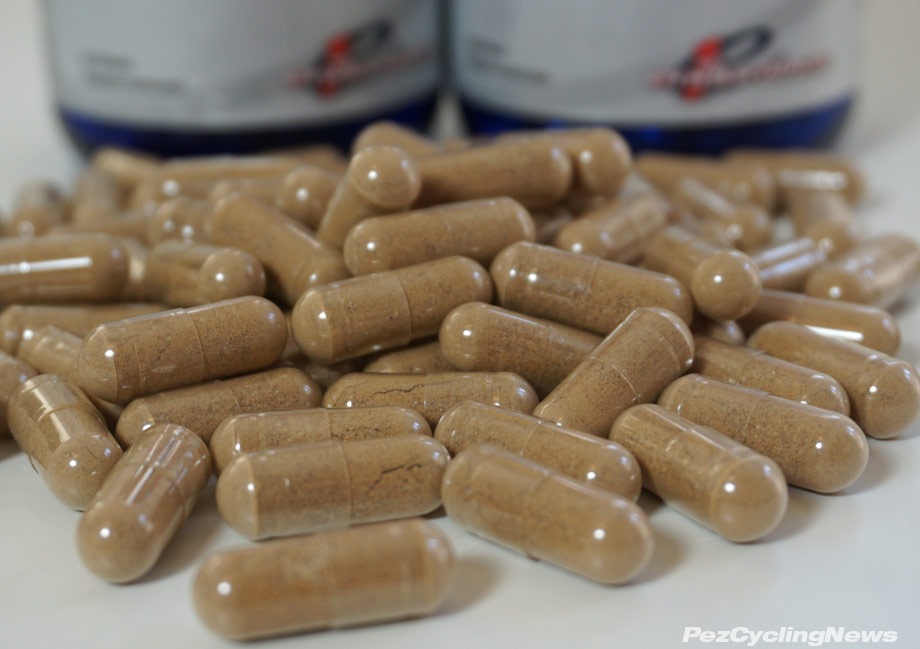 Three key components of Optygen HP are the adaptagens Cordyceps along with Rhodiola Rosea and Ashwagandha. These are herbs cultivated in Tibet, and these herbs were originally studied in athletes with the hypothesis that they may aid high-altitude natives adapt to the decreased oxygen availability.

Admittedly, most of the existing research on these individual herbs have been published in Chinese or Russian journals, such that I have some hesitations about the scientific rigour behind these studies. However, the consensus to date from these studies are promising. 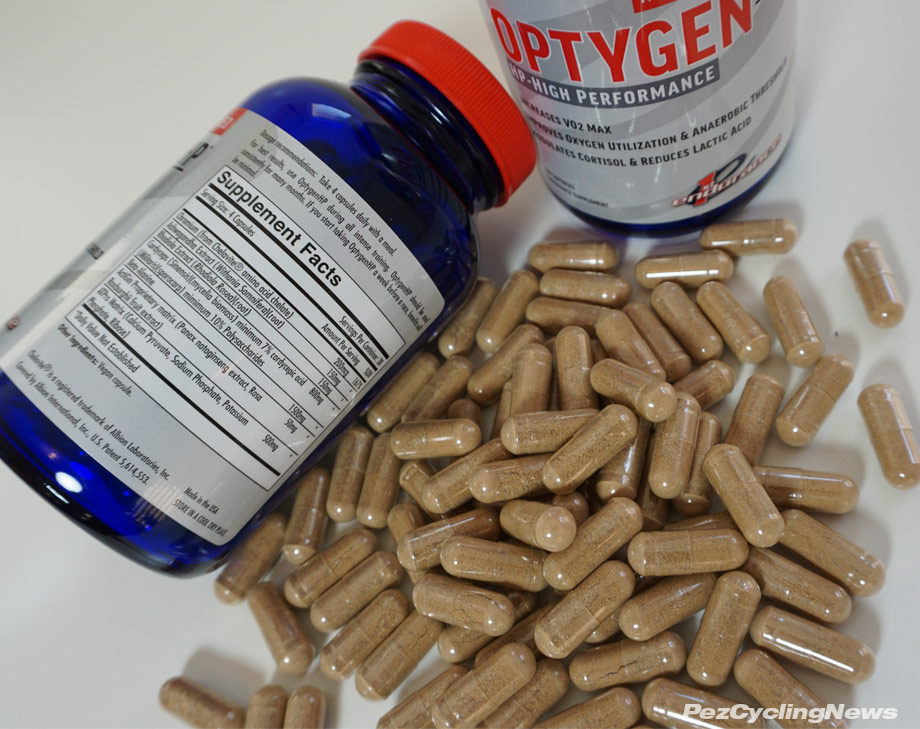 Another major ingredient of Optygen HP is Chromium, a trace mineral aiding in glucose and insulin metabolism, along with potentially glycogen synthesis and amino acid transport. It is specifically present in Optygen HP as Chelavite a patented form designed for higher uptake (bioavailability) by the body.

The other major ingredient of Optygen HP is beta-alanine, an amino acid that is converted to carnosine. A number of studies have linked supplementation with increasing lactate threshold and subsequently enhancing endurance capacity, culminating in a large 2017 meta-analysis (Saunders et al. 2017) generally showing significant benefits.

Also as part of their new formulation, Optygen HP has replaced the bovine-based capsule, and it is now 100% vegan.

My First Endurance Experience
With my block of gravel racing involving 4 races through April & May, each about 60-70 km and 2.5-3 h. I started with daily Optygen HP supplementation around mid-March. As with such supplements, it requires a steady base period of usage, and isn’t a one-off quick-acting supplement. The weather was still pretty harsh in Ontario, so a majority of my rides were still on my trainer. 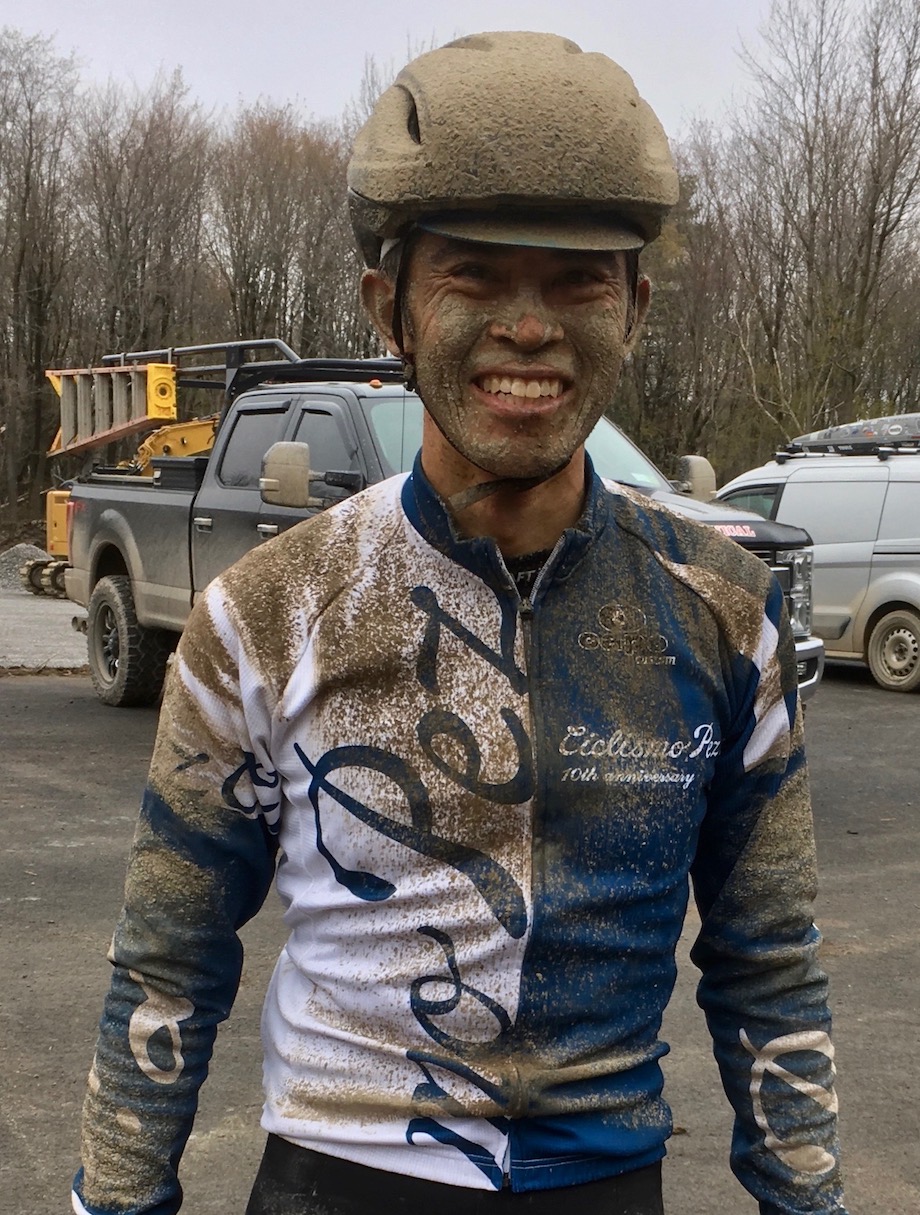 I recently wrote about my use of Xert’s Adaptive Training Advisor to guide my training, so you can check my fitness signature and workload progression there. Overall, my workload through March and April, and my overall fitness signature, were at the level that I was attaining in the height of June-July outdoor riding/racing season in 2017, and much higher than what I accomplished in early 2017 despite several winter/spring cycling camps.

First Endurance Nutrition Suite
At the same time, on my longer rides when I was able to get outdoors, I relied on EFS as my sole drink along with water. I had no issues of cramping or bonking throughout this time, which is notable especially given the sudden and sporadic transition from indoor to outdoor riding and racing. Their flavour is stronger than the ‘lemon water’ flavour I had previously used with their EFS-Pro formulation, but I did not get bored of their flavour nor did I suffer any gastric problems.

EFS is available in a variety of flavours, including the new “mud” flavour!

My fuel for all hard rides and the three races were EFS Liquid Shots. At 400 kCal each, I generally used one squeeze bottle per race, but kept a second in my pocket as backup. The gels were pretty easy to digest and tolerate even when I had no water (both bottles froze within 15 minutes at one race!). 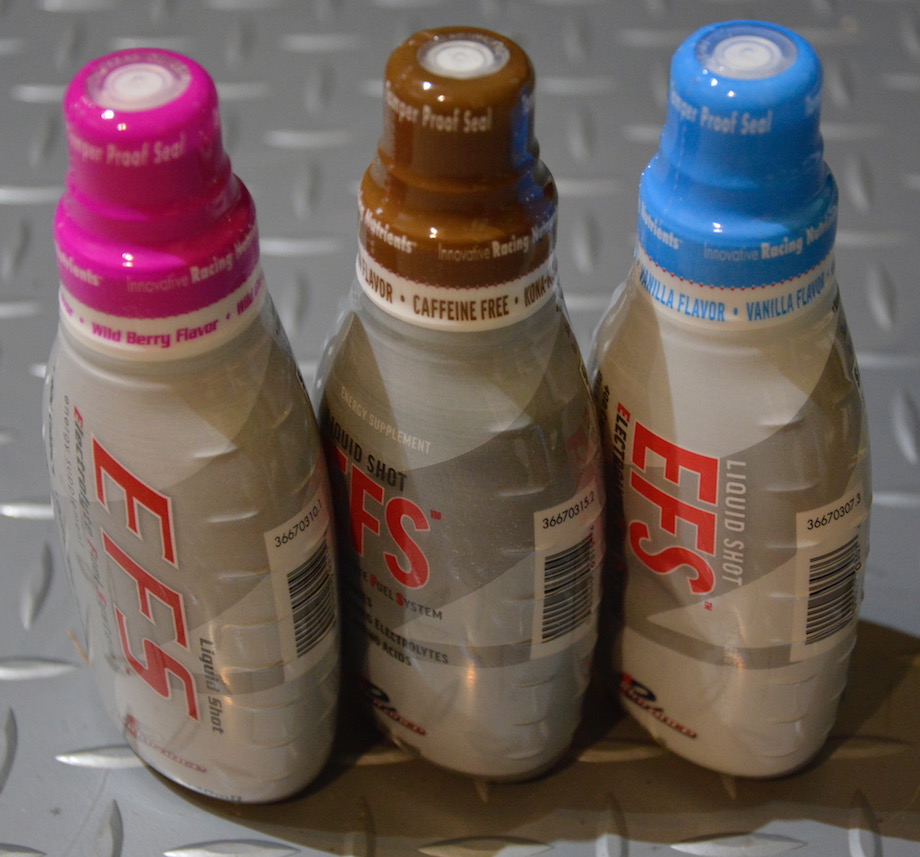 Two quibbles though with EFS Shot. In the cold, they were pretty viscous and it was hard to squeeze out of the bottle, especially when wearing thick gloves. With the weather warming up recently, the gel was much easier to squeeze out. The second quibble is with the huge amount of plastic packaging (plastic wrap around each squeeze bottle, protective cap). It’d be great if there was some way to reduce this while maintaining product integrity. In the meantime, there’s the option to get the large multi-serving bottle of EFS Liquid Shot. 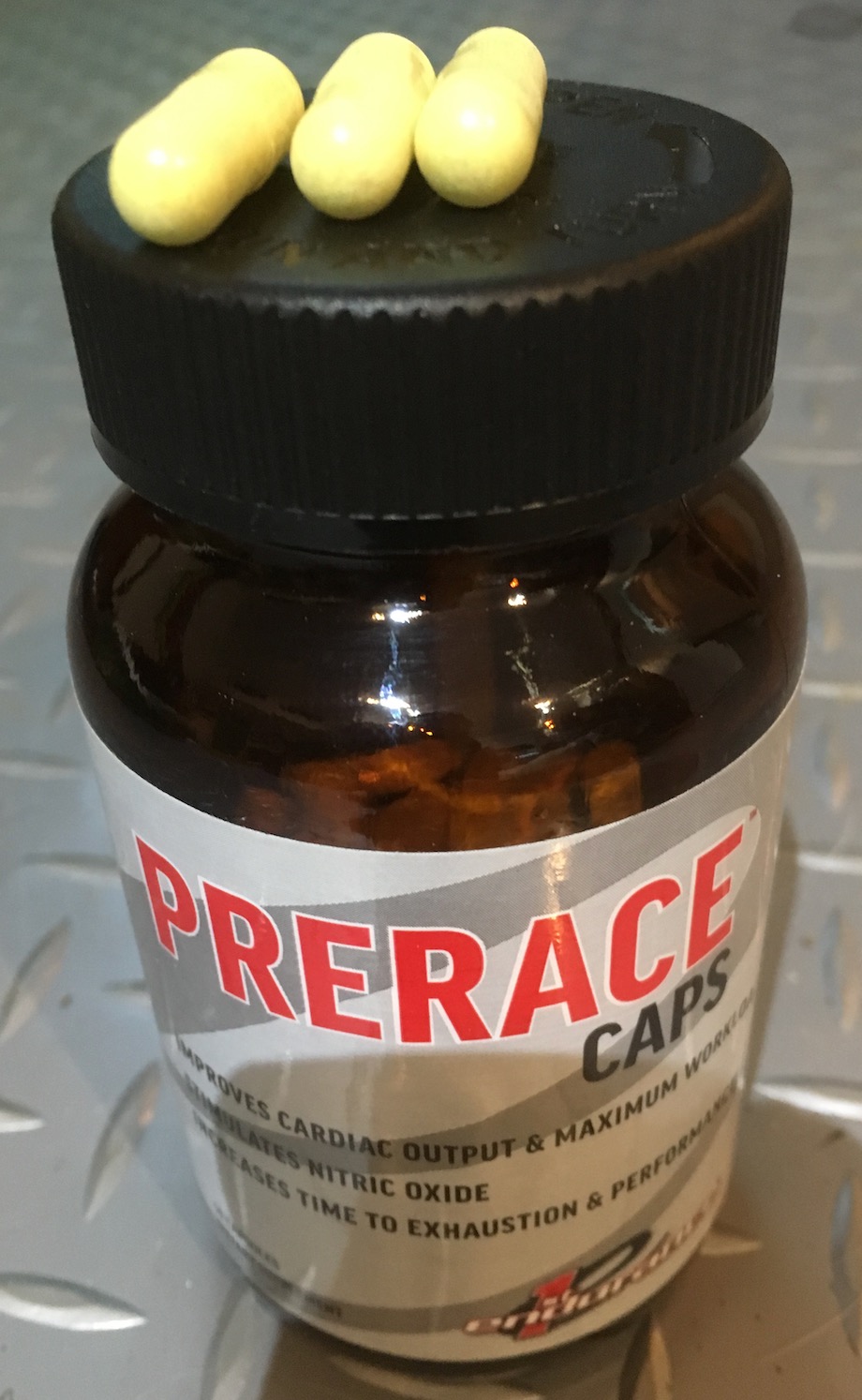 A new product for me was the Pre-Race capsules. Featuring 100 mg of caffeine along with other neural stimulants, it also contains ingredients designed to stimulate nitric oxide to improve blood flow. As recommended, I took 3 capsules about 30 minutes before races and very hard breakthrough workout. Despite the fairly high dose of caffeine, I did not have any noticeable symptoms such as the jitters (NB. During my Ph.D., I was a participant in some mega-dose caffeine & ephedrine studies, so I definitely know when there’s too much!). 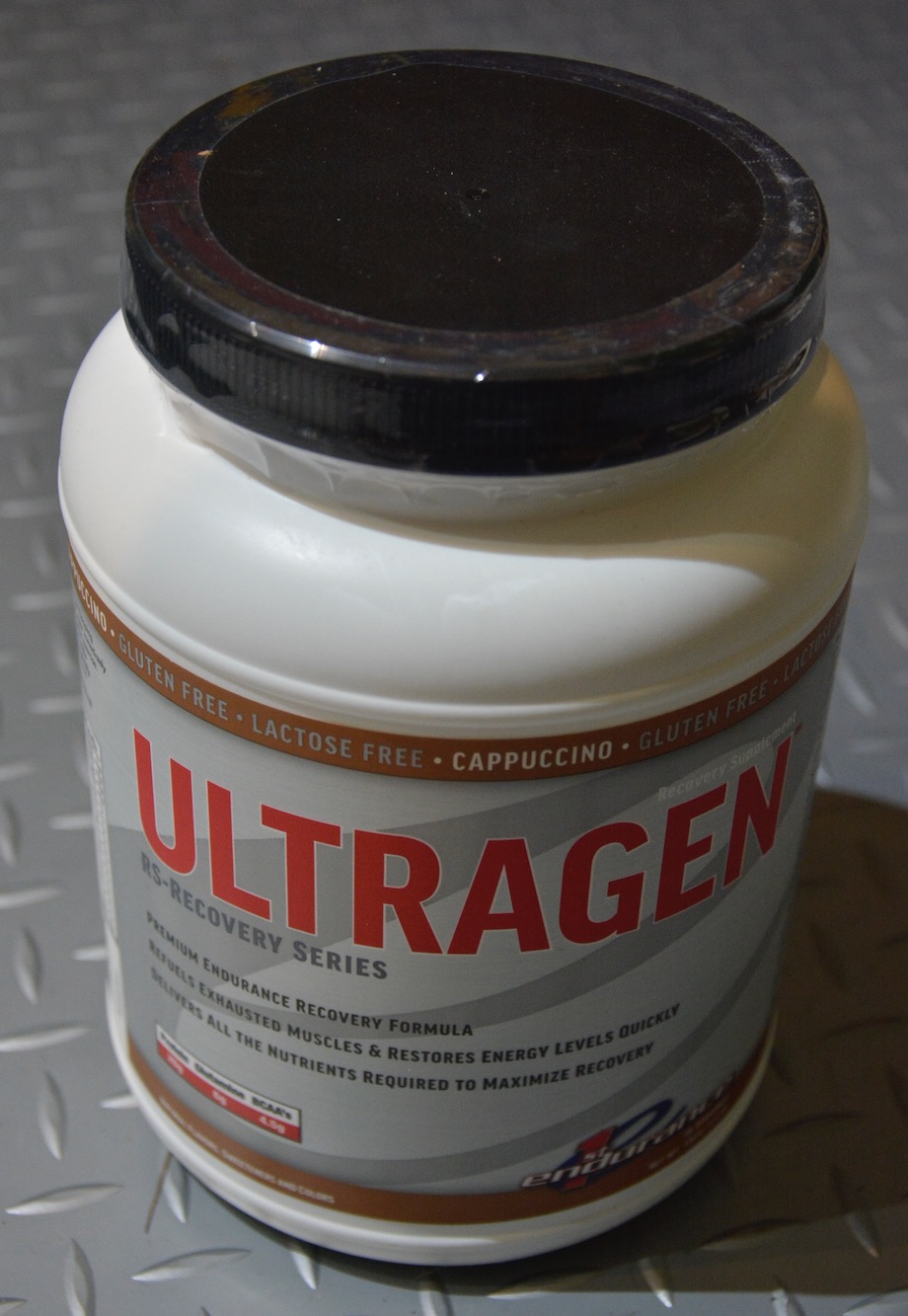 Finally, I relied on Ultragen for recovery following hard interval sessions, long rides, and races. I’ve written about them before, so I won’t get into the science behind them, but I’m a huge fan of their Cappuccino flavour. Their powder dissolved easily with no chalky taste or residue. This made it very easy to pack a serving’s worth of powder into my race bag for rapid replenishment.

Summary
Overall, I’ve been extremely pleased with using the suite of First Endurance products over this initial heavy training and racing period. Despite a very challenging winter and spring weather-wise, it’s been part of my arsenal as I’ve achieved my highest fitness signature in years, along with some peak race performances and results.

The company is true to its name and solely focused on endurance sports, with the science behind each formulation well-researched. The commitment to ‘clean’ products is also reassuring in the wild west world of supplements.

Check out the company, get more info on their science, and order through First Endurance.

First Endurance provided the product for this review but had no input on the article except for fact-checking. Dr. Cheung has no input into advertising or sponsorship at PezCycling News.

Nutrition for Those Amazing Women in Cycling!