PEZ Reviews: The hard training we do on the bike is only half of the training equation. To maximize our ability to tolerate and recover from that hard training, recovery and nutrition are important tools. One path to improving nutrition can be via supplements, and First Endurance Optygen HP targets top-end performance.

First Endurance and Quality Control
One of my very first ever Toolbox articles (my second one, if I recall) was about the risk of contamination with supplements. I maintain that there are lots of shoddy marketing and quality control in the market, and that athletes need to be especially careful about researching and understanding what they are using and why. At the same time, care must be taken in researching an individual supplement company and their pedigree.

Caveat emptor prevails, but there are companies who are doing it right in terms of ensuring a top-end supplement while at the same time making product safety central to their philosophy. First Endurance is one of them, and they go to impressive lengths to ensure quality control.

All ingredients used in First Endurance formulations come from audited suppliers who do not carry, broker or supply any banned substances. In addition, their manufacturing facility does not allow banned substances in any products manufactured. As further quality control, each case lot is analyzed by an independent testing agency, and a certificate of analysis is included with each container.

Even dearer to my heart, First Endurance has published detailed scientific information and listed all of their scientific references for each of their products on their website. Despite their relatively small size, they also gain validity in my books by sponsoring a number of independent scientific studies of Optygen and OptygenHP in university labs.

Lastly, First Endurance offers a 100% Performance Guarantee on all of their products, offering a full refund if customers are not satisfied. Another highly admirable feature!

OptygenHP
One of the newer supplements from First Endurance is their OptygenHP capsules, extending from their success with the original Optygen formulation. Supplying ProTour/WorldTour teams such as HTC-Highroad, Leopard-Trek, and in 2012 both the RadioShack-Nissan-Trek team and the Specialized-Lululemon women’s pro team, the company has proven itself in the highest realms of the sport.

OptygenHP is meant as a supplement designed specifically for endurance athletes, and is also meant to go beyond their Multi-V daily vitamin. OptygenHP contains a number of substances, including chromium, the herbal extract cordyceps sinensis, and a proprietary ATP Pro matrix. For the purpose of this review, I will focus on two of the key ingredients highlighted by First Endurance, namely the herbal extract rhodiola rosea and the amino acid beta-alanine. For each, I will go through my own scientific review of the literature to date. 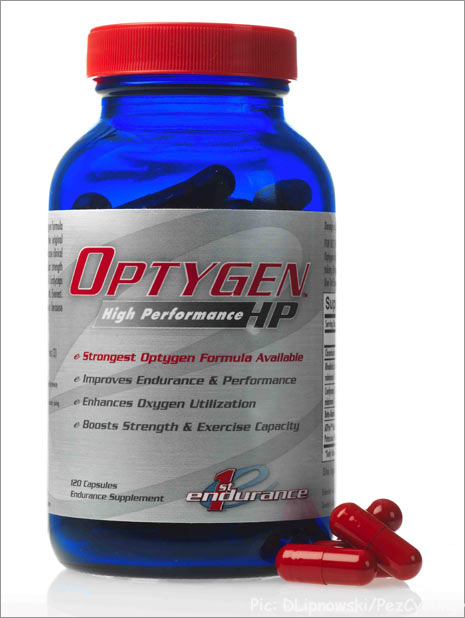 First Endurance provided me with an information package detailing their scientific information. However, in the interest of scientific objectivity, I wrote this review without reference to that package. You can get much of the same detailed information and references from their website.

Rhodiola
Rhodiola is roughly categorized as an adaptogen, or a “substance that allows an organism to counteract adverse physical, chemical, or biological stressors by generating non-specific resistance.” (3) In simpler terms, it’s not exactly clear how rhodiola works. However, it has been linked with improved cognition and mental performance, improved antioxidant effect, and improved exercise capacity.

Rhodiola rosea (also known as arctic root, rose root, and golden root) is an herbal extract that has been popular in Far Eastern herbal medicine, and has recently undergone more controlled “western” scientific examination. Research on the ergogenic efficacy of rhodiola is in its infancy, with only 16 studies found under a search for “rhodiola” and “exercise” on the PubMed literature database. Compare this to the listings for other supplements like creatine (3155) and caffeine (710), or the thousands for typical pharmaceutical drugs.

Rhodiola has been of interest for a long time, with much of the early pharmacological work done in Russia and Bulgaria. One of the most recent systematic reviews for rhodiola’s ergogenic efficacy was in 2006 by Walker and Robergs (3).

To date, the overall conclusion of Walker and Robergs’s review is that the ergogenic efficacy of rhodiola is equivocal, with about an equal number of studies suggesting improved performance versus no change. Certainly, their primary conclusion is that much more controlled scientific work is required to clearly discern the true nature of efficacy, along with best practices (e.g. dosages, target populations, exercise type).

Beta-alanine
The other primary ingredient in OptygenHP is the amino acid beta-alanine, and this has been an ergogenic aid of significant interest in the scientific literature for athletic performance. My typing in “beta-alanine,” “exercise,” and “human” came up with 60 articles. Not an overwhelming amount, but a decent amount to get a good overall handle on efficacy.

Artoli et al. (1) has provided the most recent review on the effects of beta-alanine on muscle carnosine and exercise performance. To summarize the general science and theoretical rationale for beta-alanine supplementation:

• Muscle pH is heavily impacted by exercise, especially at higher intensities of exercise.

• Carnosine within the muscle has been shown to be a significant regulator of muscle pH, essentially acting as a buffer for large doses of H+ and increasing acidity.

• Carnosine is synthesized within skeletal muscle from beta-alanine and l-histidine, with beta-alanine a rate-limiting factor in carnosine synthesis.

• Therefore, the logical chain is that, the more beta-alanine available, ultimately the greater the capacity for dealing with high-intensity exercise and increasing muscle acidity.

With the above in mind, one of the main aims of research for beta-alanine has been with high intensity, sprinting, and power types of exercise. The results have been generally favourable. The improvement does not appear to come from improving maximal aerobic capacity (e.g. VO2max) or maximal power. Rather, better performance (e.g. ability to do more/longer intervals) with repeated high-intensity bouts and less neuromuscular fatigue seem to be the key benefits of beta-alanine.

One recent study in the high-impact journal Medicine and Science in Sports & Exercise (2) looked at a specific application for beta-alanine, namely sprinting performance at the end of a long cycling race. Subjects were in either a placebo or BA group for 8 weeks of supplementation. Before and after the 8 weeks, a lab test consisted of 110 min of a simulated race on an ergometer, followed by a 10 min self-paced time trial and finally a 30 s sprint. In both groups, no differences were found in distance or average power over the 10 min TT pre/post supplementation (~300 W, so definitely no slacking). However, the BA group had significant increases in peak power (11.4%) and mean power (5.0%).

The other important consideration with any substance is potential side effects. The most common side effect appears to be a potential mild and transient feeling of tingling in the body and numbness, especially if heavy (>800 mg) doses are taken. Note that OptygenHP has a dosage of 1000 mg. In the testing done to date, no long-term side effects have been reported.

The overall message is that beta-alanine seems to be safe (at least in testing done to date) as a supplement for endurance athletes, especially for the goal of improving high-intensity training.

Personal Experiences
For my own uses, First Endurance sent me a care package of OptygenHP while I was in Finland on the first leg of my sabbatical visit. I will admit that it was not the ideal testing scenario compared to when I’m normally back home at Brock University. That’s because I was not training nearly as regularly, and certainly without a focused plan, during this year’s sabbatical. My riding consisted mainly of steady endurance rides of 1.5 – 3h once or twice a week, along with 1 – 2 runs of 30 min. I did perform a VO2max test while I was at the lab at U Helsinki, and the results definitely did show my lack of overall fitness.

So it was difficult for me to perform a valid testing of systematic training responses. What I can compare are my subjective responses to the same frequency and doses of training while using OptygenHP in Finland, and not using it the past two months in Belgium. Overall, I still felt fairly fit and ready to handle the irregular but hard (given current state of fitness) relative rides in Finland. However, most rides in Belgium without using OptygenHP, despite the historic scenery, “felt” hard. My muscles felt tight and tired after each ride, to the point where I wasn’t overly keen to train on consecutive days. The same sensations held true while running, even with a beautiful park full of quiet trails right next door.

Summary
At the end of the day, athletic nutrition and supplementation is a highly individual question, and no general template or plan can be provided to fit all endurance or even a group of athletes. As always, the best advice is to research and read up on the specific substances, supplements, and the company itself. You should be seeing whether the purported claims match your goals, potentially consult with a sports nutrition specialist, and then test things out on yourself to see whether there’s a benefit for you.

As a company, though, I have been impressed with First Endurance, their goal of using the latest research, level of transparency, and commitment to quality assurance.

Disclosure Statement
First Endurance provided free samples of OptygenHP for this review. The author has no other conflicts of interest with First Endurance. First Endurance was given the right to fact-check but not for editorial changes to the content.

Stephen Cheung is a Canada Research Chair at Brock University, and has published over 60 scientific articles and book chapters dealing with the effects of thermal and hypoxic stress on human physiology and performance. Stephen’s currently writing “Cutting Edge Cycling,” a book on the science of cycling due out April 2012, and can be reached for comments at [email protected] .