The Grand Tours are already upon us, starting with the Giro prologue in Seraing, Belgium this coming Saturday. Prologues and time trials are a different breed of effort, requiring high pain threshold and perfect pacing. What are some pacing strategies that we should be looking out for?

We initially ran most of this article after watching the flat 1 km prologue to the Giro in 2005 and watching many pros blow up about 200 m from the line. With the addition of a short but steep hill (sections at 10% grade) to the 6.2 km prologue, it’s a good time to re-run the article and update it by examining how the addition of the hill might change the equation

Despite tactical nuances and racing dynamics, the essence of many endurance sports, from kayaking to swimming and long-track speedskating, come down to an individual effort to complete a set distance in the fastest time possible. And in time trials of any distance and any sport, one of the critical determinants of success is how well you gauge your efforts. There is nothing worse than misjudging your pace and blowing up well before the line. Well, nothing except for the bitter feeling of crossing the line knowing you still have plenty of juice to spare.

Going for Broke
A number of research studies have either modeled ideal pacing strategy, or else analysed the effort of elite athletes during their time trial events. Most non-elite athletes fall into either a “go for broke” strategy or else a “J-shaped” pacing profile. As evidenced by the Giro prologue, this happens not just to beginners, but to anyone who isn’t used to the effort required for a specific distance.

In the go-for-broke pattern, you will see an athlete start out at a pace that is well beyond their sustained power output level. They fly like a bat out of hell right out of the starting gate, but then accumulate so much fatigue in their system that their power output drops dramatically throughout the event. Their hearts pound out of their throats and their legs turn to lead, such that they can barely sustain any kind of decent pace, often having to struggle at a greatly reduced pace simply to get to the finish line.

The J-shaped strategy is a bit more sophisticated than flaming out, and is likely the default pattern that most of us fall into. Namely, we start out a bit harder than our sustainable workload, then drop below that workload for the majority of the event due to accumulated fatigue from the early effort (and also likely from lack of focus and other psychological obstacles). Then we realize that the finish line is close and we still have a lot to give, then try to make up for lost time by pushing hard the final quarter or so of the event.

Even Steven
The problem with both of these typical strategies is that they are, in the vast majority of cases, performed at a much lower average power output than a strategy of even, or flat, pacing. With flat pacing, your goal is to maintain an even power output throughout all segments of your race regardless of course conditions. How do you go about achieving flat pacing? As discussed below, it requires a lot of practice and discipline, along with the right tools. A power monitor is ideal, but not always necessary.

With short hills, you have to make the decision based on your self-knowledge. Do you have the fitness and condition to “attack” the hill at a higher pace and then to recover and settle back down to your target pace? If not (e.g., hill is too long or too steep), you may be better off staying seated and maintaining your target power output throughout the hill. It’s a gamble but that’s what racing’s all about!

Obviously, out on the road, changing terrain and wind is going to affect your speed, making both time and speed of little use in proper pacing. This is completely different in a velodrome (especially indoor ones), where you can calculate the exact lap times required to ride a particular race. So one of the benefits of track riding is that a simple $5 stopwatch is just as effective as the most expensive power monitor!

Next on most people’s list of tools is a heart rate monitor. Remember that heart rate takes about 2-4 min to fully respond to a set workload, so it’s essentially useless for short events of less than 6-10 min as a pacing tool. In longer time trials, remember too not to gauge your initial effort on heart rate, because you’ll be going far too hard if you try to peg your initial pace to your lactate threshold heart rate, and will end up paying for it later.

As with all monitoring tools, ultimately the important thing is that they help you fine-tune your self-knowledge about your capabilities. Therefore, perceived effort should also be used to monitor pacing. However, such self-awareness typically only comes after using monitoring tools diligently for a long period of time, but it is still a valuable goal to keep in mind as you use other tools.

The Plus Side of Negativity
The advanced pacing technique that is most difficult to pull off is known as doing “negative splits.” This is what coaches mean when they say to start slow and then get faster as you go. Essentially, you break the distance down into segments and try to have your pace a little bit faster each segment. This is very difficult to do because it takes an incredible amount of discipline to avoid going out at max effort (you feel almost guilty because you’re not killing yourself), and then to be able to kick it up a gear as the event progresses despite accumulating fatigue.

Probably the greatest example ever of this strategy was the Norwegian speedskater Johan Olav Koss in the 10 K event at the 1994 Winter Olympics. In his home track in Lillehammer, Koss started off at an insane pace that was already faster than any other skater, then managed to systematically do faster and faster split times for the 25 laps throughout the entire 10 K.

If you’re going to aim for doing negative splits in your event, it is essential that you scout out the course (if a road event) and plan out your effort. This is where a CompuTrainer and its mapping and course creation software can be a huge benefit, allowing you to really get familiar with the course and the effort required. You have to know your pace for each segment, based not just on your present condition but your ideal condition on race day. In practice and in the race itself, this is one situation where a power monitor is of overwhelming benefit, because perceived effort and heart rates are likely not sufficiently sensitive to these minor tweakings of your workload.

Now About That Hill 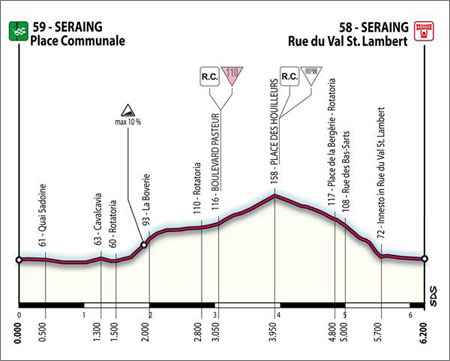 The addition of the hill in the prologue will sting the legs even more than typical, but the bonus might be the mountains jersey for one cunning rider. Courtesy www.gazzetta.it

The concept of an even pacing, either power or HR, becomes impossible with a hilly course. The best gauge, in such events, is perceived effort, which you should gear towards maintaining as high and even as possible regardless of terrain. And the only way to achieve that is through lots of experience. Therefore, while it is useful to have a HRM or power monitor to examine the effort AFTER the event, do not focus on them DURING the event and learn to listen to your body instead.

In some ways, the Giro prologue is a microcosm of the 40 km time trial at the Tour de Georgia. I had the fortune to sit in the Prodir – Saunier Duval car following Aaron Olson for the TT, and the course was brutal. Long lumpy sections to start, then a vicious 2 km at > 10% grade, with a fast twisting descent and a flat run to the finish.

In both cases, the hill will definitely separate the pack by a bigger margin than a flat 6.2 km prologue. At Georgia, stage winner Floyd Landis didn’t pre-ride the uphill section, but repeatedly practiced the downhill sections on his TT bike in the morning in order to determine exactly how far he could push himself. This preparation definitely paid off, as lightweight climber Tom Danielson was faster going up the hill, but couldn’t match Floyd’s speed on the downhill, ending up losing the TT (and the overall Tour) by 4 s. Moral: Understand, practice, and exploit your strengths!

The addition of mountain (KOM) points at the top of the Giro prologue hill (in this case for fastest time up the hill) means that some riders will take the majority of the prologue “easy” and then absolutely blast up the hill. The aim for them will be to get a few days in the green mountains jersey. This was done to perfect effect by German sprinter Marcel Wust in 2000 at Le Tour, where he blasted the prologue hill and earned the polka dot climbing jersey. Besides making the organizers scramble to find a jersey larger than the typical XS size, it led to the comical sight of Wust wearing the polka dots and throwing his arms up in victory as he won Stage 5 that year in a field sprint!

Stephen Cheung is an Associate Professor in the Kinesiology program at Dalhousie University in Halifax, Nova Scotia, with a research specialization in the effects of thermal stress on physiology and performance. He can be reached for comments at [email protected].