“FIENDISHLY SIMPLE, YET BRUTALLY HARD. EVERESTING IS THE MOST DIFFICULT CLIMBING CHALLENGE IN THE WORLD.”

This is how the folks at Hells 500 (proud creators of the Everesting™) define how simple this challenge may appear, in an attempt to prepare you for what you’re facing. But I wanted to find out in my own way so, I gave it a shot and fortunately succeeded. Today, I describe you my experience and how you should prepare in order to effectively fuel and plan ahead for a successful Everesting™ on a bike. 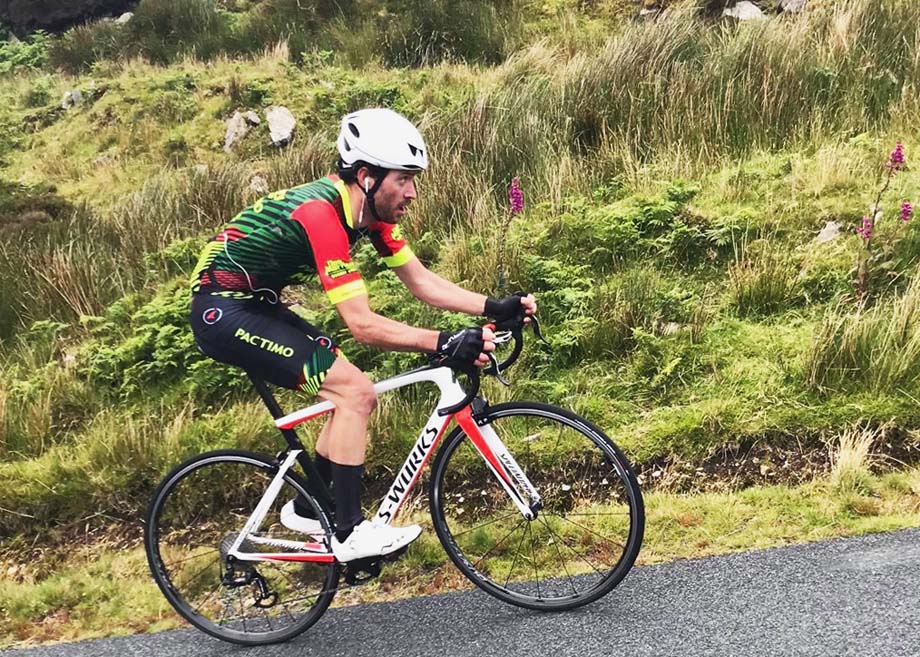 The concept behind the Everesting™
The concept really is simple: Pick any hill, anywhere on the planet and repeat it up and down in a single activity until you reach the astonishing altitude of 8,848m. You can do it on a bike, on foot, or attempt it virtually on Zwift. Do that, submit your Strava activity the official Everesting™ page and (after evaluation of your activity) you’ll find your name in the Everesting hall of fame.

How it all started for me
A few months before, something like this would be unimaginable for me. I had witnessed with enthusiasm both Lachlan Morton’s attempts, succeeding in his second attempt and afterwards when Alberto Contador set a new record time in a very close climb here in Madrid (later beat by the Ronan McLaughlin).

It all started when planning my vacation to the Costa Brava in the cycling paradise of Catalonia region. A friend told me that him and a couple of other lunatics would be attempting the Everesting challenge to raise money for a Cancer Foundation and asked me to join them. And it was all that took really. With 6 weeks to go, I was in a decent shape but needed to reduce some weight for the challenge and started working on it.

The hill I chose and why
A few days before when meeting with my friend and his lunatic buddies who were also attempting the challenge, I found that they were planning it wrongly. They were doing both sides of the same mountain which wouldn’t count as an official Everesting (only one climb is allowed, not two sides of the same mountain). Plus, they were going to start at 3am. That’s when I decided to do things my own way and start it at 7am. I ended up choosing one of the sides they were climbing, the hill of Sant Pere de Rodes from Port de la Selva. It was a tough but beautiful climb of nearly 6km at 7.5% with an astonishing view to the bay that would captivate me when I struggled the most (or so I though). Each climb would theoretically accumulate 500m but ended up being a little less than that. 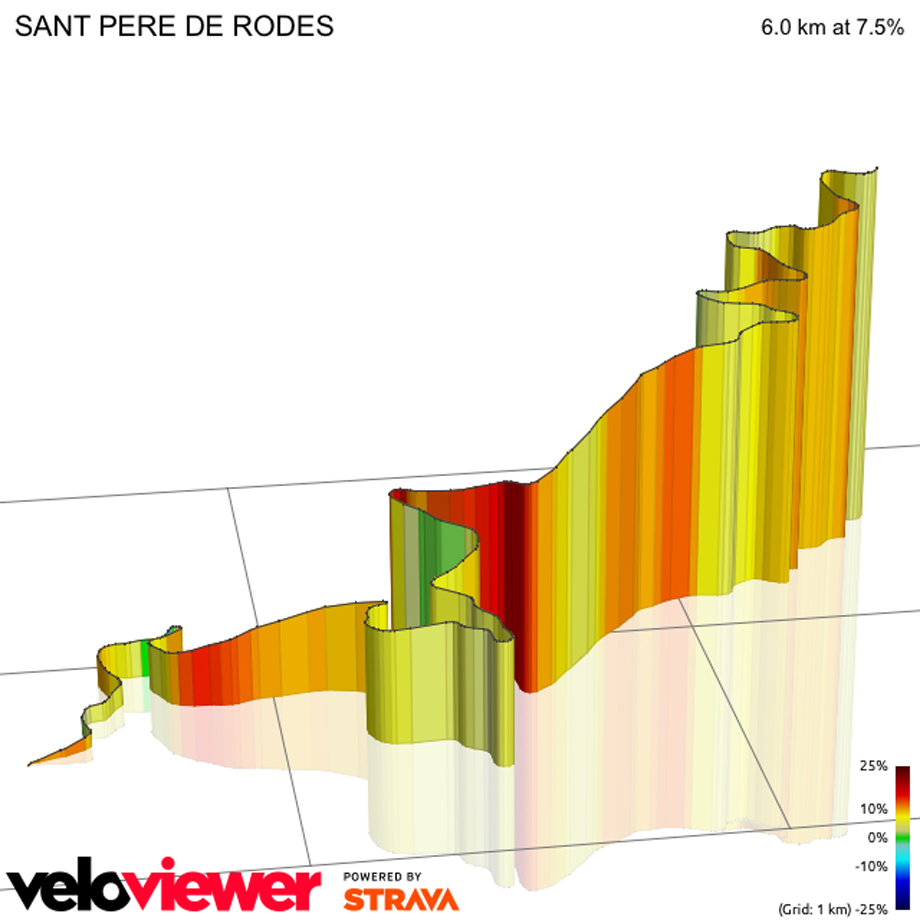 Initial considerations for a successful Everesting™
(at the end of the article I’ve included a list of other non-nutrition related tips for you to consider before attempting this. Some of them are things I wished I had thought of before going for it).

Being a Nutritionist with somewhat decent experience planning the logistics for cycling races with the riders I’ve been following over the years, I felt I had a slight advantage when planning ahead for this day. But it took me every ounce of knowledge integration, on how to organize the logistics, how to stay fuelled & hydrated, how to minimize gut discomfort, how to decrease heat perception and most importantly, who could be there with me all day to help me and support me. After all, I had never been on the saddle for so long and I had never climber more than 5,200m (17060 feet) in a single activity.

It’s not so much about being physically fit to go through with this challenge, but mostly have the right mind-set and knowing that it’s going to be a grind; preparing yourself mentally for it but mainly being extremely organized and thinking about your day very carefully, planning every stop, what are you going to do on that stop? How long can that stop last? Who’s going to do what for you? What bottles you’re going to have? What food/snacks you’re going to eat?

These are the details that when successfully programmed, will reduce the need to think when you’re tired which is something you want to avoid at all costs. Basically set up a processing chain that just makes everything automatic so you can easily memorize it and know exactly what to do when getting to base camp. 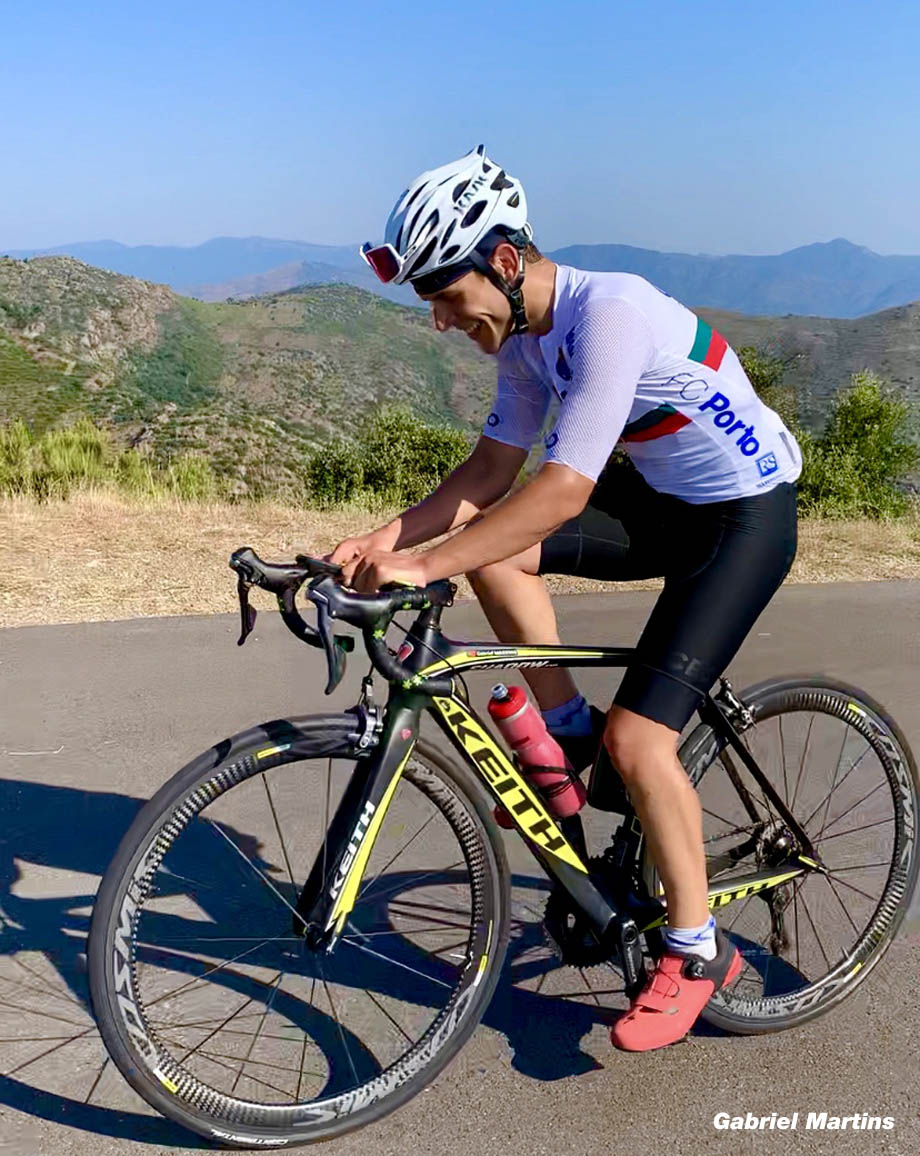 Simulate it, set an achievable goal and (only) then plan your strategy
This pretty much sums up what you need to do before going for it. After choosing the climb it’s absolutely essential to do at least one climb with the GPS you’re using. And why is that? In my case, the climb was supposed to be 500m each ascension. But I was wrong and ended up accumulating only 470m, which costed me ~2 more climbs and precious daylight towards the end.

After simulating the climb and having your true elevation value, set the number of ascensions and a feasible time for each ascension. On the Everesting page you can find a very useful calculator so you can easily have an estimation of the time you’ll need to complete the challenge.

Whatever you do… Do not underestimate the effort – it may take you longer in second part!

Setting base camp
Base Camp is key! And although it’s called “base” camp, I chose to set it on top. The reason why? I preferred to use the duration of the descent to help with digestion since I would be hardly making any effort, allowing the gut to work in piece.

This is where your team of trustable people will be waiting for you and whom you must assign to their respective functions. In my case, I was lucky enough to have my girlfriend with me all day and she had everything ready after each climb. But whomever you choose, make sure it’s someone who’s not only completely available for you (family members are always preferable) but someone who can easily understand your instructions and planning.

I planned for ~40min ascensions, with around 5’ of stops at base camp only from the 3rd ascension in order not to waste time plus 10-12min descent. 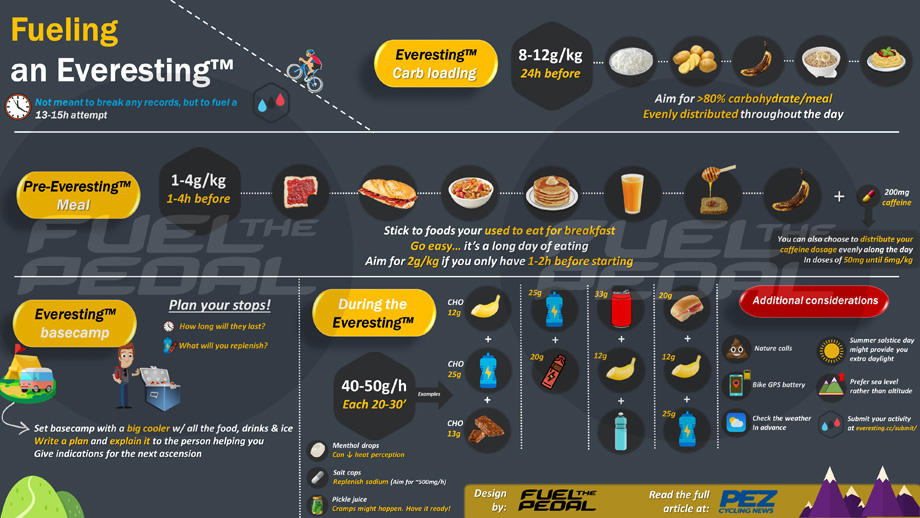 The nutrition challenge
Having planned for a range of time of 13-14h (in case something went wrong), it was time to set the nutrition plan, from the carbohydrate loading the day before, breakfast and during (Fig 1.).

Everyone in the cycling community knows about the importance of a good “carb loading” before any long ride. In a previous post we’ve tacked this issue. The nature of an Everesting falls in the ultra-endurance realm rather than in the endurance side of physiology. Still, the recommendations of 8-12g/kg of carbohydrate in the last 24h could still apply. But, if you’ve been resting in the last 2-3 days not doing much vigorous activity or rides, then I would aim for the lower range of 8g/kg on the day before.

Breakfast
Again, the recommendations aim for 1-4g/kg consumed 1-4h before the event. This is where your personal preference and routines start playing. The ideal would be to eat breakfast as early as possible, around 3h before and perhaps aiming for 3g/kg. But given that this is very early and if like me, you prefer to prioritize sleep then aim for a “lighter” breakfast of 2g/kg around 1-2h before. For this, it’s essential to prepare it the night before. In my case, I had a big sandwich of white bread with Spanish ham (Jamón), generously spread with Jam. It’s something I know I tolerate well and digest quite fast. This should be your main criteria when choosing the type of foods in your breakfast.

Remember, prioritize gut comfort! You’ll be ingesting a humungous amount of food throughout the day and challenge your gut like never before!

During the Everesting
Remember, it was 13-14h on a saddle. I know you may be thinking of the usual range of 60 to 90g/h. But we are not aiming to break any records here… We are looking to finish it. So, context matters! Given the extreme duration, lower intensity and need to minimize gut discomfort, it would be wise to aim for a much lower range. In my personal experience in this challenge, I would say that 40-50g/h would be much safer and attainable to be maintained for this period of time.

The type of foods again is entirely dependent on your preference and what you’re used to. Do not use new foods/snacks that you don’t know how you tolerate. From bars, gels, bananas, sports drinks, gummy blocks, jelly sandwiches, rice cakes, Energy drinks or even solid carb-based meals, its up to your preferences. Whatever bars or other solid foods you choose, prefer those lower in protein, fat and fibre. I usually try to maintain these nutrients <4g per bar in order to avoid gut discomfort. And yes, such criteria remove of kinds of nuts from the picture. I know they’re trendy but I wouldn’t recommend them for such a challenge for your gut. In addition, it would be ideal if the bars and gels could also be a vehicle for sodium. If this is not possible, then make sure to have salt caps ready.

Hydration
Since I was in a much humid environment than what I was used to, I estimated my sweat rate by weighing myself before and after a 2h workout on the same day I simulated the climb. I estimated that I’d need around 800ml and ended up being a good bet. If you use a sports drink (which I strongly recommend) make sure to aim for a not to high carbohydrate concentration and aim for a safe range in the hypotonic range of 4-6%. Other colleagues might disagree but again, I prefer to prioritize gut comfort.

As for dietary supplements, I’ve only used 3 things: Caffeine, menthol (halls), salt capsules (a lot of them). 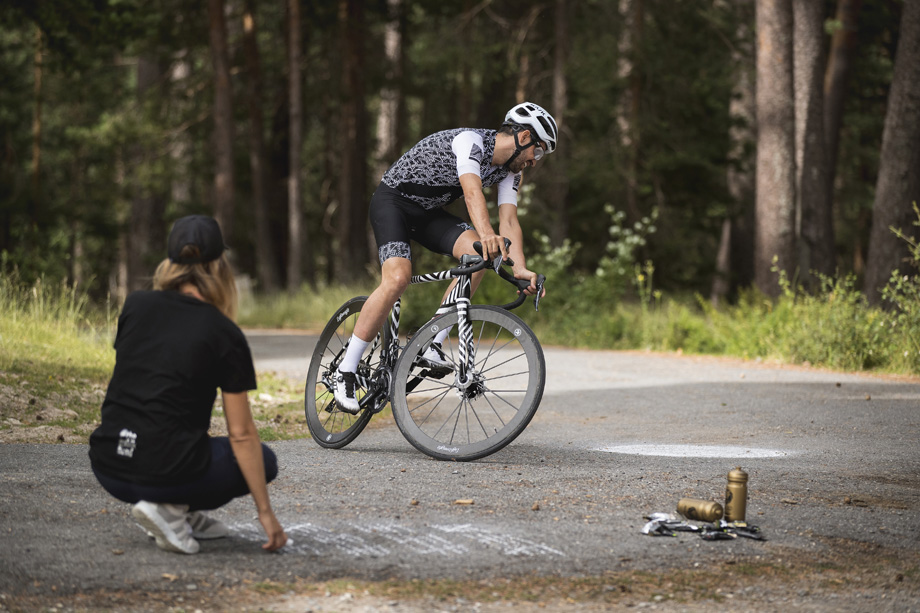 Additional considerations
These are mainly non-nutrition related tips that you might want to consider:

● I said it once and I’ll say it again: simulate the climb with your GPS. This happened to me and forced me to do 2 extra laps at night. Bring lights;

● Have a bike computer with a long battery life. In my case I used the Wahoo Elemnt Roam which has a battery life of 17h;

● If you want to maximize daylight, aim for the summer solstice day. If you’re lucky enough for the weather to be in your favour, it might be a good bet;

● Nature calls will happen, so account for a couple of them in your stops;

● Avoid altitude. It’s always better to do this challenge closer to sea level rather than at moderate to high altitudes;

● It’s a lot more mental than physical. I went through several phases during my attempt. From questioning it… To denial… To acceptance! Having people to support you and who are waiting for you after each climb was for me the single most important factor of them all. If you’re as lucky as I was to have some amazing human beings (one in particular) by your side, then it’s halfway done.