Supplement companies come and go, but one that has stood the test of time and scientific analysis has been First Endurance. Multi-V, their multi-vitamin entry, has now been tweaked with a Multi-V Pro version, which I used in conjunction with my recent hard block of front-loading periodization. 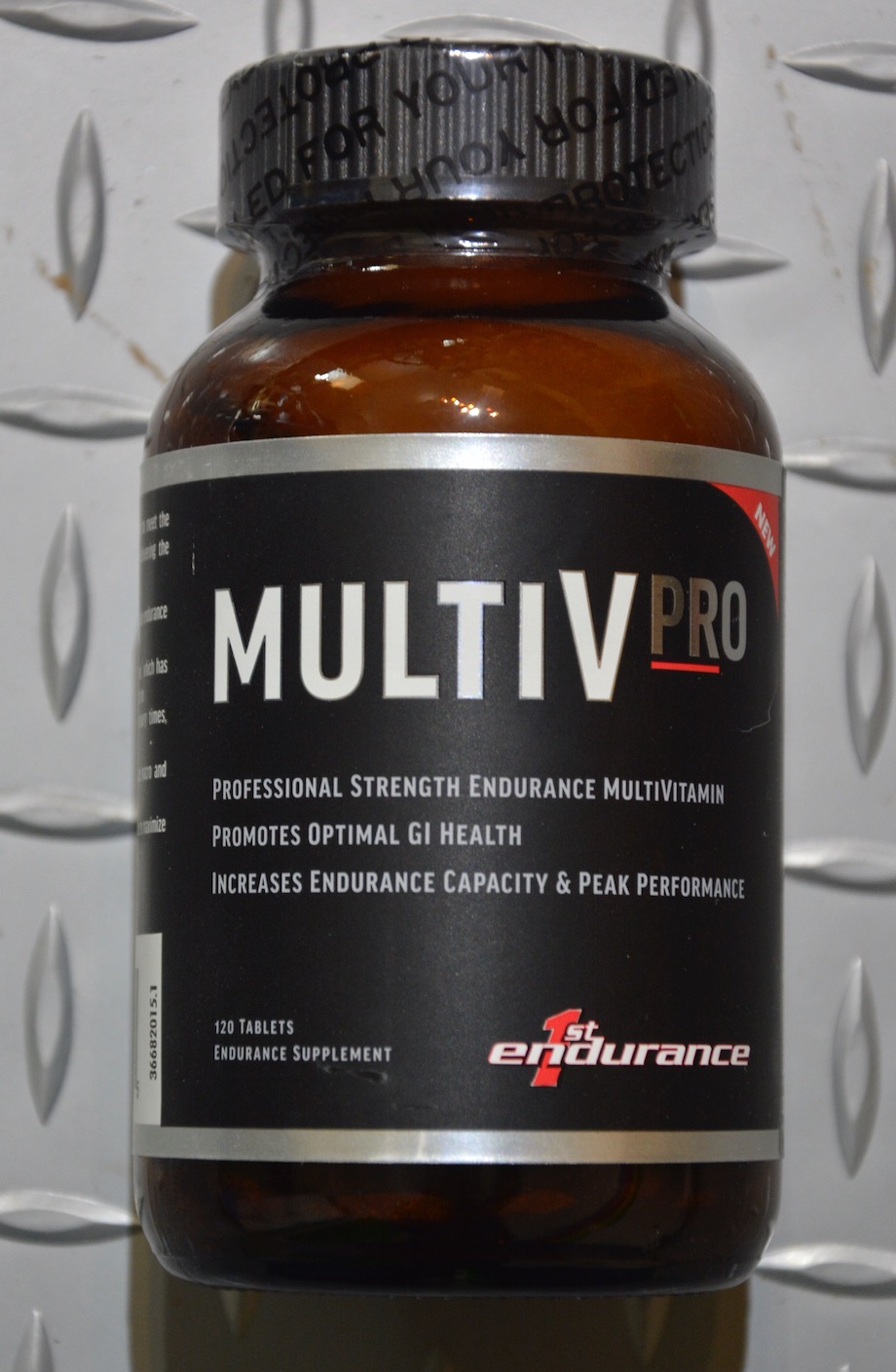 I have written repeatedly, both here in PEZ and in my Cutting-Edge Cycling book, on the morass of semi- to non-ethical claims and practices of the supplement industry. I remain convinced that, for the vast majority of recreational and even competitive athletes, the primary nutritional focus should first be on healthy eating practices and a balanced approach to food.

That means that the emphasis should generally be on eating a balanced diet of natural foods first, and then only using supplements judiciously with a specific purpose. And that use should be backed by detailed research into the product, its ingredients, and the company itself. OK, lecture over…

Rational Supplement Use
Having done my rant, the first thing I would do when considering a supplement is to research the company for its science, reputation, and philosophy. In this case, I have developed a healthy level of respect for First Endurance. Some of my reasons for this:

• Since their beginnings in 2002, they have focused on only one target market – endurance athletes. They are not interested with how you look in the gym or anything else except endurance sports.

• Their products are based on science. Not just empty phrases like “clinically tested” or “lab-proven” but actual peer-reviewed scientific papers. Most of the employees and product designers, in addition to being serious endurance athletes themselves, have advanced degrees in exercise science and/or nutrition. I fully respect that they are basing their products on scientific evidence rather than what is easiest to market. Their website has plenty of detailed science to inform rather than bedazzle, along with links to many of the scientific papers.

• They have a fanatical devotion to negate the risk of banned substance contamination, which I’ve always pegged as one of the biggest risks with most supplement companies and products. This goes from their owning all intellectual property of their formulations, sourcing from suppliers and facilities that guarantee no affiliation with banned substances, through to independent third party testing.

• They have a 100% product satisfaction guarantee across their entire line, with full refund otherwise.

Multi-V Pro
First Endurance has recently developed a “Pro” line of its multi-vitamin along with their EFS hydration mix. This series is produced in limited quantities, and are primarily geared towards elite endurance athletes. That means that their formulation is different, catering towards the higher training volumes and intensities of this demographic.

Analysing the ingredient list of Multi-V Pro versus the standard Multi-V, one big difference that jumps out is that the Pro does NOT contain any vitamin C or E, whereas the Multi-V contains 400 mg and 200 IU, respectively. Why the complete removal of these two vitamins that most of us actively seek out in multi-vitamins?

Their removal is largely based on a seminal 2014 study in the very prestigious Journal of Physiology that, to my knowledge, is the first to have a double-blind (neither the participants nor the experimenters knew who was getting the experimental 1000 mg of vitamin C or 235 mg of vitamin E), randomized, controlled study focusing on well-trained endurance athletes (Paulsen et al. 2014). I’ll save the detailed examination of the study for a future Toolbox article, but the key findings were that the vitamin group had similar performance gains but overall decreased cellular biomarkers of endurance adaptation in the mitochondria.

While I am not privy to First Endurance’s thinking, my guess is that they chose to eliminate vitamin C and E in Multi-V Pro to maximize the potential cellular adaptation with very intense training in that target market. For immune system protection, they have incorporated beta glucans instead.

At the same time, they maintained a moderate amount of the two vitamins in the traditional Multi-V for their anti-oxidant potentials for athletes who are still training hard but not necessarily at professional levels.

Another major difference Multi-V Pro is the 50% higher dosage of chelated iron (27 versus 18 mg), to accommodate the higher turnover in red blood cell production in professional endurance athletes.

Multi-V Pro also incorporates various ingredients that are designed to improve digestion and nutrient absorption, so it serves as more than a “simple” multi-vitamin but instead as a broad spectrum supplement.

Turning Pro
While I am admittedly nowhere near training at the level of an elite or professional cyclist, I did put my sample bottle of Multi-V Pro to use during my recent four weeks of front-loaded periodization. I figured that this period of unusually hard training, starting with a week of 5 very hard interval sessions, was a decent stimulation for me. 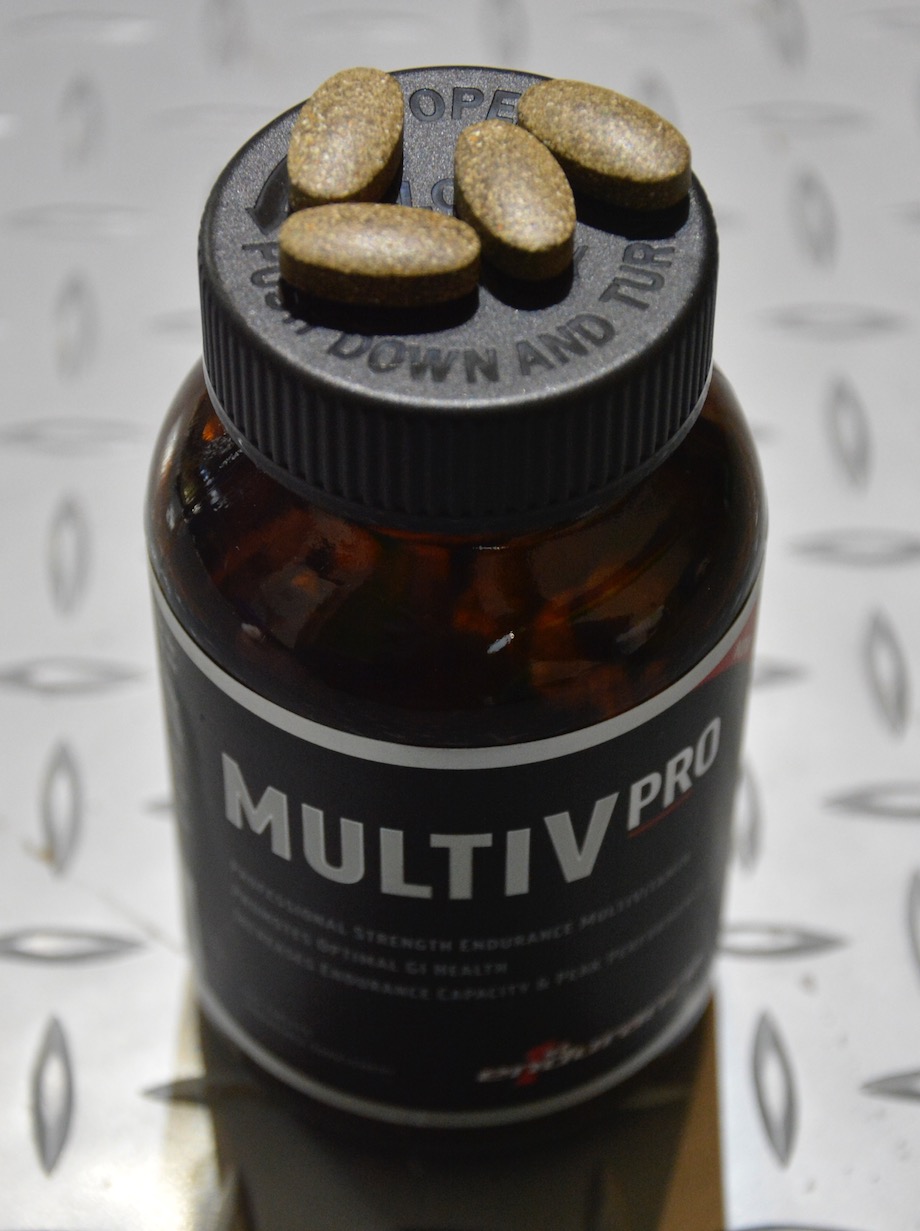 I therefore started taking the 4 daily tablets a week before the block began, with a bottle being 30 days’ supply. The four tablets should be taken all at once with a meal or two tablets each in the morning and evening.

I noted in my Toolbox article this week that the front loading periodization worked out extremely well for myself. My 8 min power outputs ranged from 265-268 W over the first week of front-loading, increasing to ~275 W during Weeks 2-3, and up to ~285 W on Week 4.

I did get caught up by a head cold that made its way through the halls of our lab area early on in Week 4, but largely recovered over 2 days. This resulted in 1 unplanned day completely off the bike and 2 slightly lighter sessions on the following days.

Summary
As always, supplements are exactly that, nutrients to supplement your normal healthy diet. Multi-V Pro is not going to transform your nutrition – that’s your job. Having said that, if you are interested in a multi-vitamin that is directly designed for endurance athletes, and where great care has been taken both in design and preventing cross-contamination, either Multi-V or Multi-V Pro are very solid options.