TOOLBOX: It comes as no surprise that sleep is a fundamental part of recovery for optimal performance and training adaptations for athletes of all sports. Foods rich in carbohydrate with a high glycaemic index, protein in high levels of tryptophan, dietary supplements such as tart cherry juice appear to positively affect sleep quality. On the other hand, caffeine and ethanol appear to have the opposite effect. In this article we go through the latest evidence on how nutrition can influence sleep. 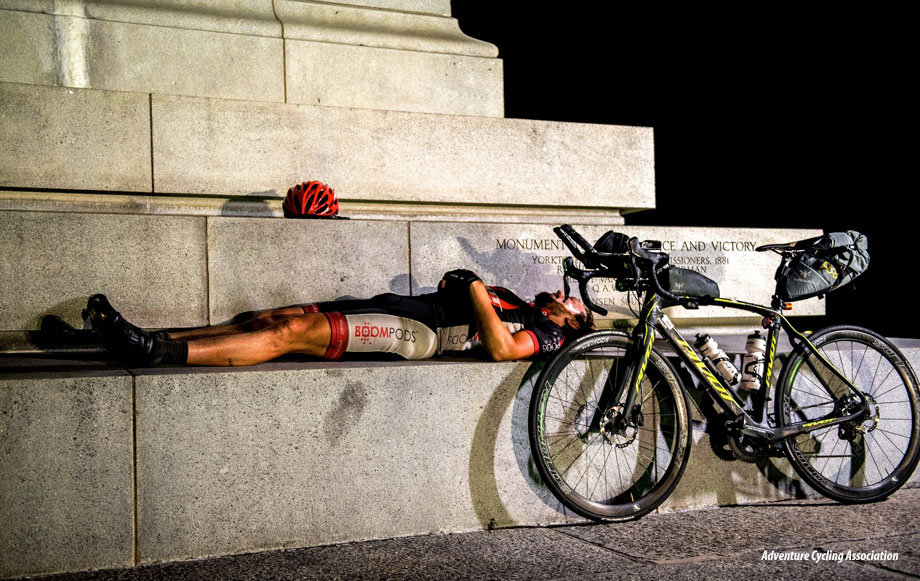 The human body is tremendously resilient machine capable of adaption to the most extreme conditions and deprivation situations. We could easily thrive through periods of less food and water availability, but being chronically deprived of sleep may have consequences that can affect mood, memory, general cognition and eventually immunity.

Why is sleeping important for athletes?
If the balance between training stress and physical recovery is inadequate, performance in subsequent training session or competition may be adversely affected.

Sleep deprivation is not uncommon among athletes and may occur for a variety of reasons that can range from anxiety to even overtraining during periods of high intensity training. In fact, adolescent athletes sleeping less <8h per day are more likely to experience sports or musculoskeletal injuries. Additionally, It’s not uncommon for athletes to suffer from pre-competition insomnia which may include difficulty falling asleep, waking during the night and early final waking times.

Introducing Chrononutrition
This fancy word refers to the possible interaction of different foods and nutrients with the circadian system and it’s a somewhat new area, which means we should exercise caution not to get carried away in believing that any of the following strategies will magically transform you sleeping quality. Still, there is some potential in changing some dietary patterns. 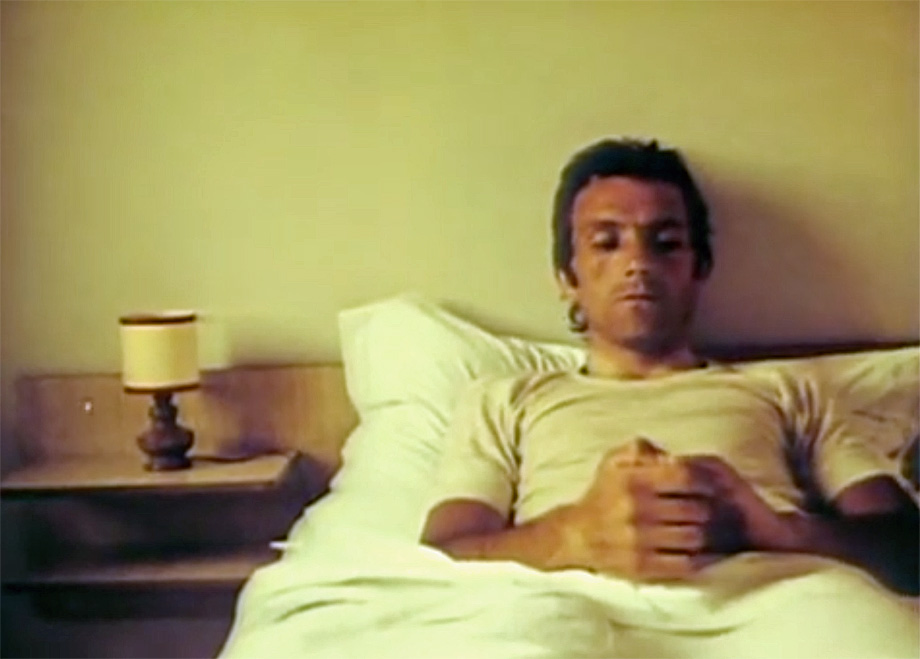 Sleep disruptors in athletes
Sleep can be promoted either by inhibiting wake-promoting mechanisms or by increasing sleep promoting factors through nutritional interventions:

● Timing and meal size are important disruptors. Large portions and/or meals later in the evening can negatively impact sleep potentially due to the thermogenic effect of digestion and its potential negative effects on circadian rhythm. Minimizing late dinner time and reducing portions appear to be an important factors conditioning sleep quality.

● Caffeine ingestion and timing is probably the greatest nutrition-related sleep disruptor. While its role in improving exercise performance is clear by now, ingesting coffee or caffeine supplements needs to be carefully planned according to your own sensitivity.

● Alcohol would be another obvious culprit since its consumption has been associated with poorer sleep quality and quantity, reduced REM sleep and increased sleep disturbance in the second half of the sleep bout. But everything in life needs to be quantified and dosed; Behavioural studies suggest that up to 2 to 3 standard drinks before bedtime initially promotes sleep, but these effects diminish in as few as 3 days of continued use. (Standard drinks: ~350 ml of beer, ~150ml of wine and ~45ml of spirit drinks). 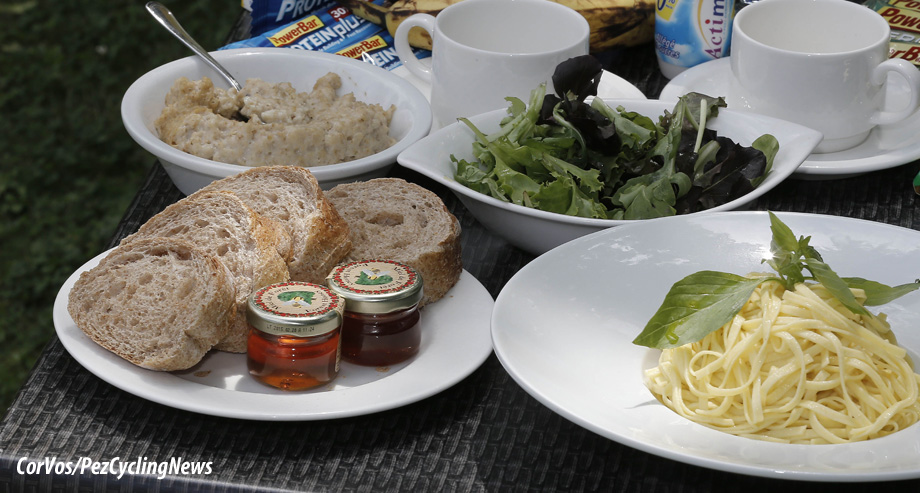 Nutritional strategies that may promote sleep

High glycemic index foods
It is well known by now that including high-carbohydrate rich foods at dinner can help promote sleep when comparing to a meal with low-carbohydrate content. Additionally, there is growing evidence showing that consuming a meal with a high-glycaemic load 4h before sleeping can positively influence sleep onset latency, especially when compared to consuming the same meal 1h before. This may be of particular relevance since many people engaged into cycling willing to lose weight often start by cutting carbohydrate rich foods before sleeping, ignoring their role in sleep promotion. Including foods like potatoes, rice, bread, pasta, quinoa, honey and fruits in your dinner meals should do the trick.

Tryptophan rich foods
Tryptophan is an essential amino acid that is a precursor to serotonin and melatonin, which could therefore influence sleep quality. While tryptophan is present in a lot of protein rich foods, it’s much more abundant animal sources such as milk, turkey, chicken, fish, eggs but also some plant-based sources that would require much higher quantities to obtain significant amounts of it. In fact, the milk protein, α-lactalbumin has been reported as having the highest natural levels of tryptophan among all protein food sources and this would probably be your best bet when seeking to improve sleeping quality.

Melatonin
Melatonin is a hormone that regulates the sleep–wake cycle. Since endogenous melatonin concentration may influence core temperature facilitating sleep, increased exogenous melatonin could affect changes in core temperature improving sleep quality. Research using doses ranging from 0.3 up to 5mg taken before sleep, shows a decrease of sleep latency around 7 minutes and a modest increase in total sleep time around 8 minutes.

There are also interesting effects of Jet lag reduction, especially in eastward travel, but the timing should be properly adjusted; if it is taken at the wrong time, early in the day, it is liable to cause sleepiness and delay adaptation to local time.

The effects of melatonin on sleep are modest but do not appear to dissipate with continued melatonin use. Although the absolute benefit of melatonin compared to placebo is smaller than other pharmacological treatments for insomnia, melatonin may have a role in the treatment of insomnia given its relatively benign side-effect profile compared to these agents. 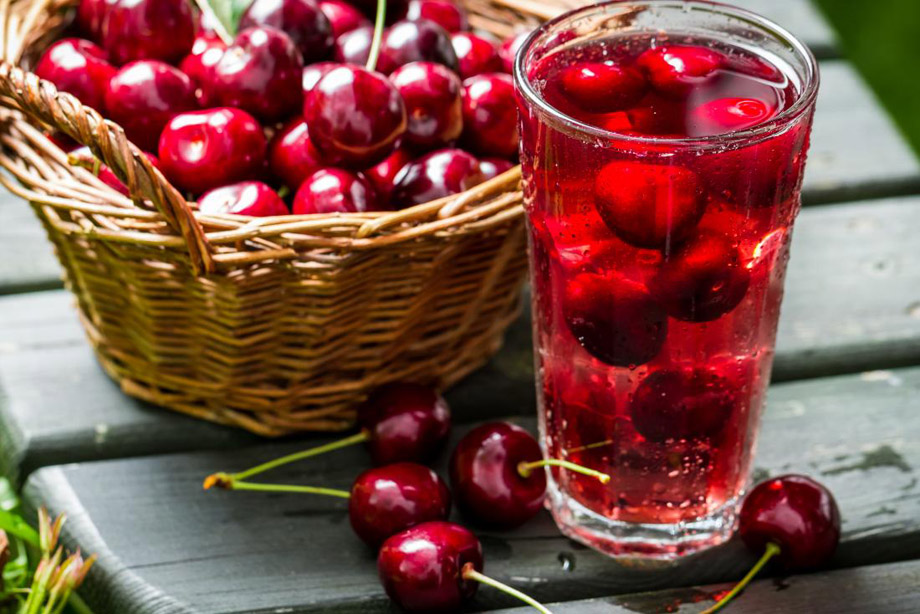 Cherry tart juice
Likely one of the most promising dietary supplements regarding reduction of muscle soreness, recovery and eventually increasing sleep quality. Tart cherries appear to contain considerable concentrations of melatonin and wide variety of phenolic compounds that show antioxidant and anti-inflammatory properties in response to exercise that could improve recovery. 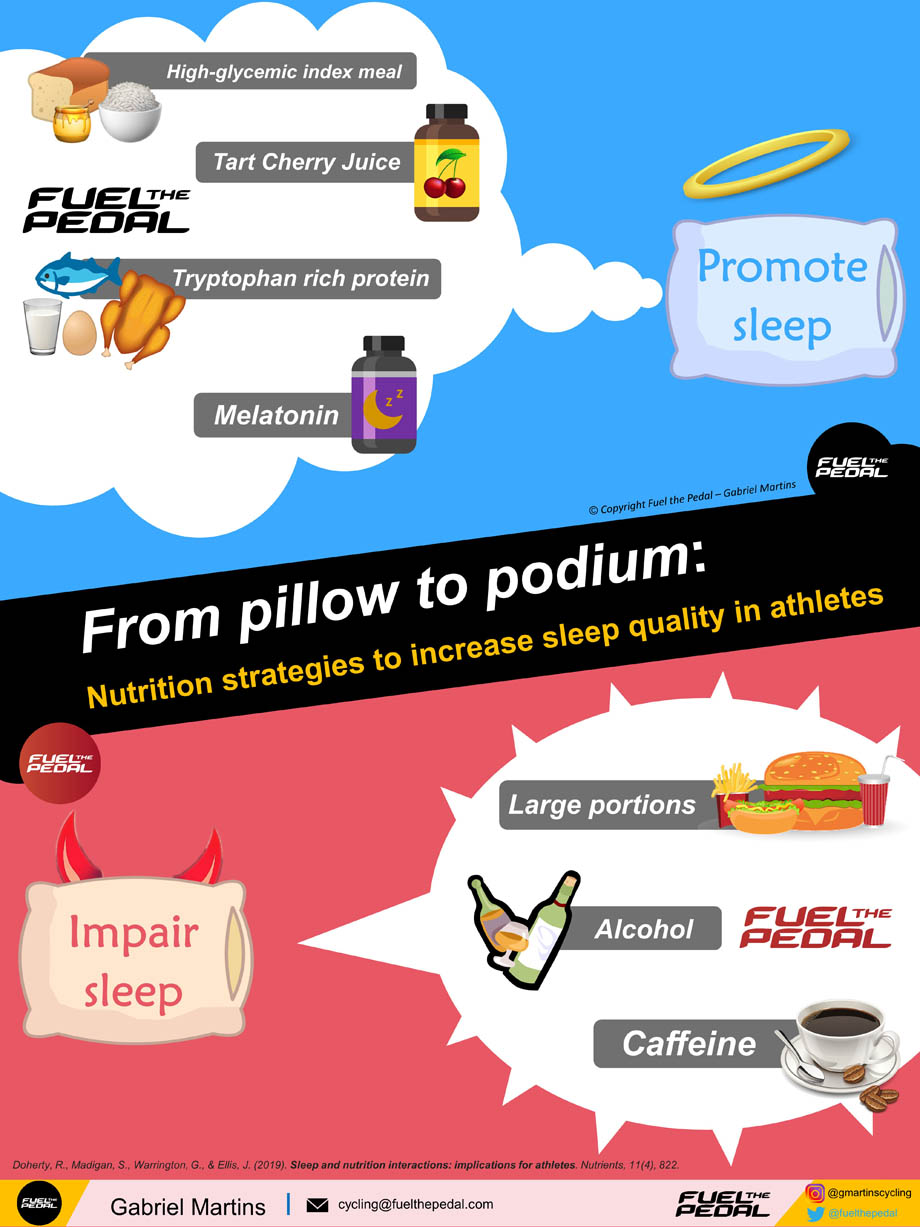