Most of us a focus on physical training and bike technology to make ourselves better riders and racers. One thing we don’t often think of though, is the power of thought, and how training our minds can be as important as training our bodies and bikes. The Ultimate Cyclist CD might just be the next ‘big idea’ in training…

What Is It?
Josh Horowitz, founder and Head Coach of Liquid Fitness (and periodic PezCycling ToolBox contributor) has recently collaborated with Australia’s foremost mind clinician, Rick Collingwood, Ph.D., on a new audio CD, The Ultimate Cyclist, to train your mind to make you a better cyclist.

The CD combines progressive relaxation techniques, positive affirmations, guided imagery, and Rick’s patented theta rhythm audio technology which helps induce a deep state of relaxation. The CD is designed to help cyclists improve their relaxation on the bike (a key element to improving efficiency and avoiding mishaps), their motivation, and their overall enjoyment of the sport. 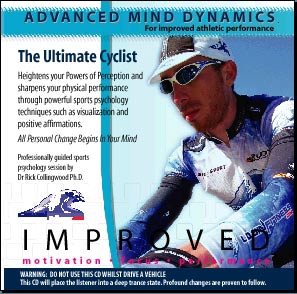 Why Train The Mind
Horowitz suffered a horrible wreck at the Redlands Stage Race in 2004 which left the competitive Cat. 1 with a severe concussion. The physical injuries were soon overcome, but Horowitz found that he was petrified to return to the bike. Luckily, he didn’t give up the fight and sought the expert help of Sports Psychologist Michael Madison. Josh learned that the root of his crash was an inability to relax and focus on the bike. As well as using several different sports psychology techniques, Horowitz started listening to Rick Collingwood’s relaxation CDs. Josh found them very helpful, but wanted to find something specifically designed for cyclists.

But Is It Science?
Using mental imagery to enhance physical performance is nothing new, and a study done in 1932 by Edmund Jacobson showed that visualizing an activity produced small but measurable reactions in the muscles involved in the imagined activity. When you go through a guided mediation or hypnosis session, you are implanting learned memory of a successful action. The amount of nerve activity is so slight you might not be aware of it, but sensitive electronic equipment can pick it up. Thinking is real practice!

There are many examples of top athletes using guided visualization to improve their sports performance. Boxer Ken Norton used hypnosis training before his famous victory where he broke Mohammad Ali’s jaw. Others who have openly discussed their work with self hypnosis are 1980 National League batting champion Bill Buckner and Baltimore Oriole Jim Palmer. Jack Nicklaus has stated that golf is 90 percent mental and only 10 percent physical. He prepares for matches by visualizing and mental rehearsing the toughest holes on the course. He’s claimed that he’s never hit a ball in practice or in competition without seeing the swing and the outcome in his head before actually taking the shot.

Even Lance Armstrong talks about visualization during his fight against cancer in his book, It’s Not About the Bike. These are all examples of using imagery and visualization to overcome obstacles when a simple physical approach is not always adequate.

The Ultimate Cyclist CD utilizes the “latest scientific audio technology” through Dr. Collingwood’s clinical techniques in advanced trance hypnotherapy – namely, positive subliminal messages, exact trance inducing frequencies, and mantra. The CD is taken directly from Collingwood’s sessions, and you get the privilege of being hypnotized by one of Australia’s (and possibly the world’s) leading and most experienced therapeutic hypnotists all at less than half the price of a professional sports psychology session.

Modern clinical hypnosis goes under a variety of labels such as visualization, guided imagery and goal-directed relaxation and has been used for pain control, improvement of quality of life for terminal patients and to treat general stress and mood disorders. Clinical Hypnosis is not to be confused with stage hypnosis which is a show or performance, more similar to a magic trick or stand up comedy than real science.

The 60 minute CD contains a number of levels which flow seamlessly into the next:
Level 1 incorporates Spoken Voice to induce hypnosis and re-educate the subconscious mind.
Level 2 is a constant F Sharp – scientifically proven deep trance inducing frequencies.
Level 3 uses Subliminal Impulses as a subliminal positive message program.
Level 4 comes at the end of the CD and uses Dr. Collingwood’s Theta Rhythm, which is an effective frequency to sustain the trance.

Go To Sleep?
Personally. I have never put much thought into the mental side of bike racing, and I’m willing to bet I’m the same as most of us. In fact, I probably put more thought into picking my breakfast in the morning – which is always cereal. I get on my bike and ride. Evidently, this is the perfect background to test for this product.

It’s commonly known that physical adaptation from training takes place mostly as we sleep and our muscles repair themselves. The mind is no different. I’ve found the easiest and most effective way to use this CD is to put it on as you are getting into bed at night. Rick’s voice and the theta rhythm should quickly put the most die hard insomniac to sleep (it worked for me), but the positive messages on the CD will work on the subconscious mind even if you are not aware of them in your conscious mind. You can even put it on repeat so that you will be listening to the messages several times throughout the course of the night.

Hmmm, sounds pretty good to me – I just slip the CD into my laptop, put it on repeat and go to bed? Nice. You’re directed in the first part of the CD to listen to the entire CD everyday for a week, and then afterwards as needed. Since it’s so easy to do, I’ve just put it on every night since I got it – about a month ago.

What About Me?
Has it helped me? No questions – Yes. How do I know? Well, right as I got the CD, I came down with the worst sickness of my life – I was sick for about two weeks, and when I got back on the bike, I was at about the fitness level I was at about 2 years ago. I was a wreck physically and mentally, and was getting destroyed in races. The CD arrived at just the right time.

It took me awhile to figure out how it was helping me, as I fell asleep within the first ten minutes for at least the first week straight. This was incredible in and of itself, as I had been suffering hardcore trying to get to sleep and staying asleep. Once I started using the CD, I not only fell asleep almost instantly, but had no problems staying asleep for ridiculous amounts of time. 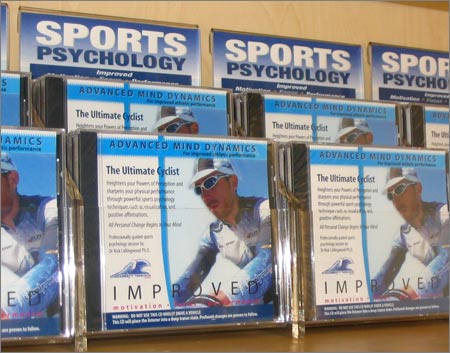 Subtle Changes
Good sleep, though, is obviously not the point of the CD. It’s a nice byproduct, sure, but what about on the bike and in life? I didn’t notice it day to day, but after a solid week or so, I noticed a completely different feeling on my bike – I was relaxed. My elbows just naturally stayed bent and loose, my shoulders relaxed and allowed me to stay lithe on the bike. Grinding big gears suddenly didn’t feel right – I started to spin a bit more, not a jolty lurch, but a smooth rotation, like my legs and cranks were one.

It might sound crazy, but it’s what happened to me.

The biggest change was in high stress riding situations. I admit my on-bike persona has been characterized by personal thoughts of doubt – whenever I get near the front, I get a feeling like I’m not supposed to be there, I’m not good enough. If things get really tough, I tend to focus on the pain and how much I’d rather be sitting on the side of the road than suffering through this ridiculous chore.

Since using the CD for the past month, I’ve noticed that my thoughts of self doubt have disappeared almost completely. I can’t say that I’ve gone out and kicked some crazy ass, but I can definitely say that I’m not afraid where I once was. I don’t back down because I think I’m not good enough. I definitely don’t see myself failing. I followed the seemingly ludicrous directions on self-affirmations and I can’t stop muttering, “I ride the best, because I am a winner.” I started saying it in my head in the middle of a race last weekend, it was insane, but for some reason, it brought about some kind of ethereal peace in the middle of an incredibly tough criterium.

The basic thing to know in all of this: no matter how airy-fairy this type of “training” sounds, it’s the kind of stuff that can benefit almost everyone. It works in ways that you really can’t define or touch, and yet, you’ll likely know something is happening, a definite positive change.

Josh professes to big goals for his product, and rightly so – it’s a perfect addition to a previous black hole: “I have a vision, that if every cyclist in the country listened to this CD, you’d see a big improvement in the overall level of the sport. Less crashes, better riders and more Tour de France winners! That may be a fantasy, but I know the CD has helped me overcome many of the mental barriers that were holding me back, both with cycling and in life.”

Check It Out
For a retail $34.95, it costs a lot less than the latest nano-tech gadget you’ll buy for your bike, and can quite possibly make a bigger long term difference to your cycling than anything money can buy.