Toolbox: When a Netflix documentary gets more attention than actual research, I fear for whatever may come next. I’m obviously referring to the recent documentary #Gamechangers that is getting everyone turned on and apparently making the general population and athletes wanting to go vegan (sorry, the current label is now “plant-based”). But the advice is based on faulty science and anecdotal evidence at best.

It may be inevitable for cyclists to also start questioning the benefits of eating a plant-based diet for their health and performance. So let’s check the evidence beneath the bold and oversimplifying claims of this documentary.

People who were already vegan, loved the documentary. People who are against vegans, hated it. And others reacted like this: 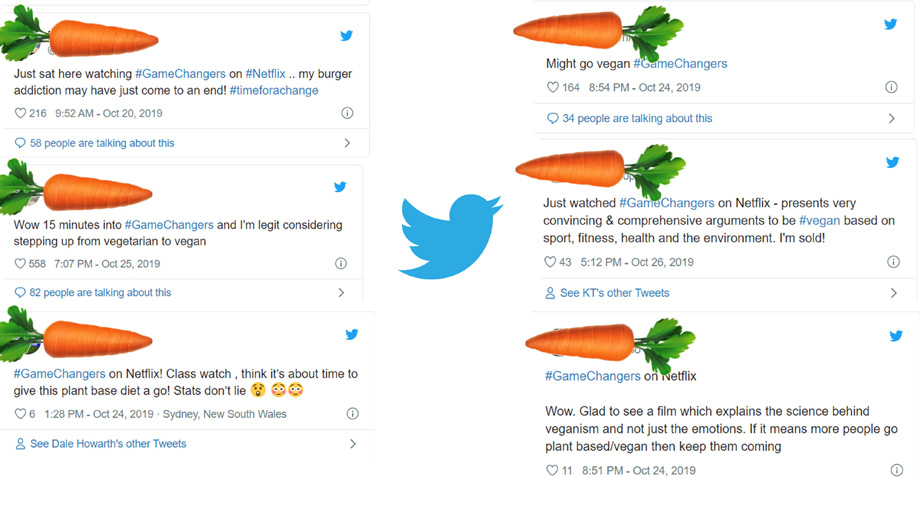 It is beyond the scope of this article to tackle all the health related issues and pseudo experiments performed during this fine piece of fiction and entertainment “a la Cameron”. Instead, we will be focusing our attention on the aspects related to the exercise performance and direct implication for athletes.

So, Who’s Behind the Documentary?
The documentary producers include Jackie Chan, Louis Psihoyos, and James Cameron, an Academy Award winning filmmaker known for movies like The Terminator, Titanic and Avatar. But James Cameron is not only in the Filmmaking industry. He’s also on the organic/plant-based business, owning the pea protein company, Verdiant Foods, whose goal is to “…become the largest organic pea protein fractionation facility in North America”. Besides, the majority of health and fitness gurus on the movie all sell books on “plant-based diets” 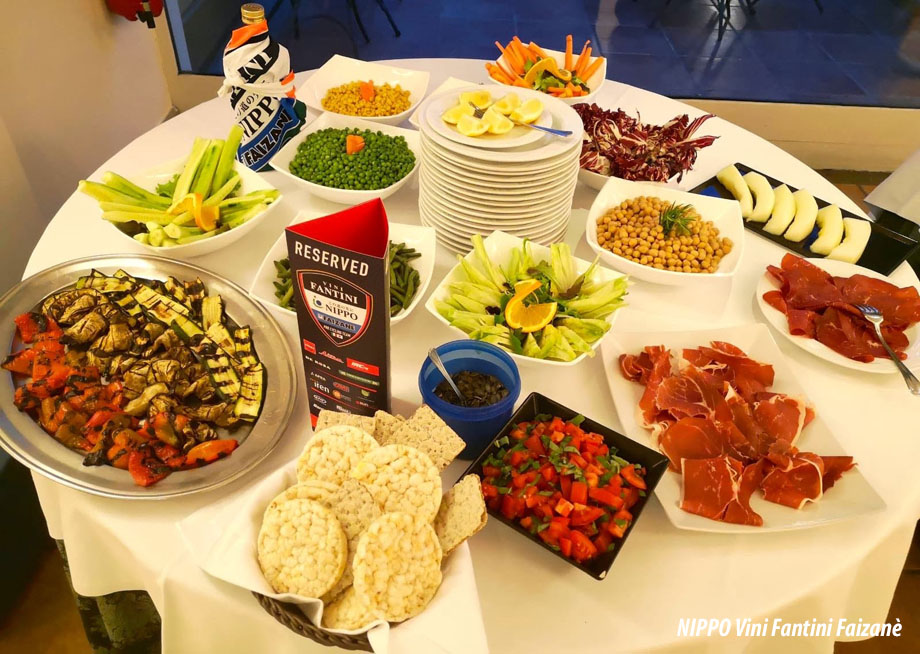 Conveniently, they also don’t mention other interesting facts on this anecdotal article:

Regardless of this, the actual study latter mentioned from Dr. Fabian Kanz from the Medical University of Vienna uses trace chemical elements such as Strontium to find the plant-to-meat ratio but the same paper mentions that this method has experienced a major correction and also that the elements in the bones can change with time.

The study also indicates that using Nitrogen measurements, some of the gladiators probably had a regular consumption of animal proteins and a lower intake of legumes. The authors then conclude that “the individuals from the gladiator cemetery were a very heterogeneous group who consumed different kind of foods.”

This is one of the main reasons I believe that people who don’t have a proper training in research, shouldn’t even try to interpret it because they’ll inevitably oversimplify it and cherry pick only the studies or small parts of one study to fit in their ideologies.

Relevance for today’s athletes/cyclists: None! But we actually believed it!

Claim #2 – Going plant-based VS eating junk food
Curiously, there’s not much information about the athletes’ diet before they allegedly switched to a vegan diet (if they did).

One of the athletes, Bryant Jennings states that he grew up on popeyes, KFC and fried chicken and didn’t even know about vegetables until he gave up on meat in 2012. Using this logic, I’d say that switching from a fast-food diet to any balanced diet lower in fat, richer in carbohydrates and lean proteins, would likely result in improvements, whether if you’ve transitioned to a vegan, low fat standard diet or even a paleo diet.

In fact, as one of my nutritionist colleagues from Portugal (Pedro Carvalho) brilliantly stated in his reaction to the Game Changers documentary: “athletes who used to consume 300g of red meat with vegetables as a pre-game meal and switch to eating less protein and more carbohydrate, are obviously going to increase performance. High-intensity efforts are fuelled by carbohydrates but this has nothing to do with the protein source…”

Relevance for today’s athletes/cyclists: There are many positive changes you can do with your diet that are unrelated to going radically plant-based. Some of those changes can reflect on your performance as a cyclist.

Claim #3 – Plant-based diets provide superior protein quality
I could be overly thorough and present the values of digestible indispensable amino acid scores (DIAAS) from different animal VS plant protein sources to show that animal sources are to superior when in comes to total amount of amino acids, digestibility and bioavailability.

But I’ll be reasonable and agree that nowadays we have plenty of plant-based protein sources that allow us obtain all the amino acids we need, which may extend to athletes as well.

Although I have to tackle the lack of basic of nutrition 101 energy and portion estimations referring directly to what I’ll call the Peanut Butter dichotomy.

This is a common misjudgement when trying to unknowingly provide forced arguments to prove that plant-based foods also provide protein. But we fail to just say how much we could eat and in some case, how many calories some of this equivalent portions might have.

With this reasoning, you could also say that 19 cups of spinach have the same amount of protein as 85g of beef, or 6.5 cups of broccoli. Good luck with that.

Relevance for today’s athletes/cyclists: Both diets may allow for obtaining all essential amino acids but overly relying solely on plant-based sources might difficult this process.

Claim #4 – Plant-based diets are superior for exercise performance than omnivore diets
Don’t get me wrong… Nutrition plays a vital part in sports performance and health maintenance of the athlete. Eating more vegetables, fruits, nuts, seeds and other staple foods that are part of a plant-based diet provides indisputable benefits for the athlete. I’d agree that we could even benefit from decreasing (not radically cutting) consumption of some kind of meats that are richer in saturated fats in order to increase fish and legume consumption as other equality valid sources of protein.

But from there to state that not only plant-based diets are superior for performance, but also that the cyclist, the boxer, the strongman, the sprinter and the ultra-marathoner that appear on the film are great athletes ONLY because of their diets… It’s a big statement. But don’t take my word for it. Let’s look at the evidence: 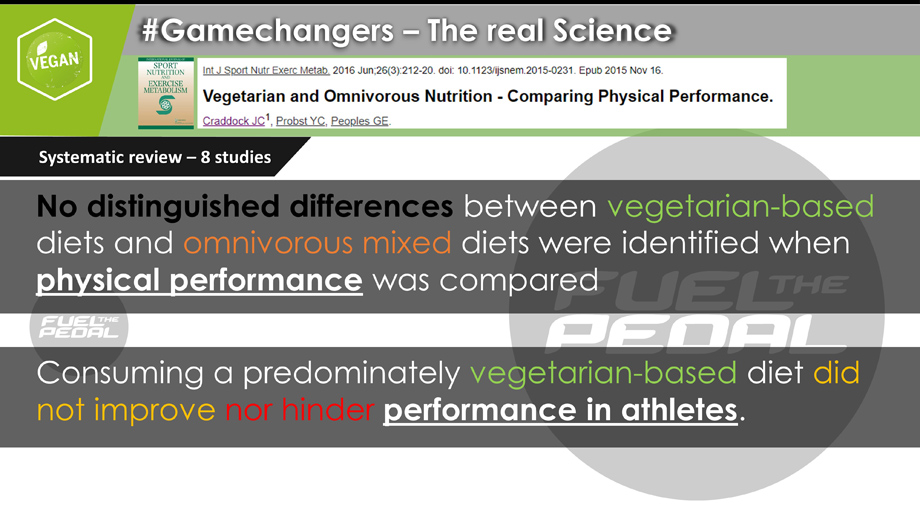 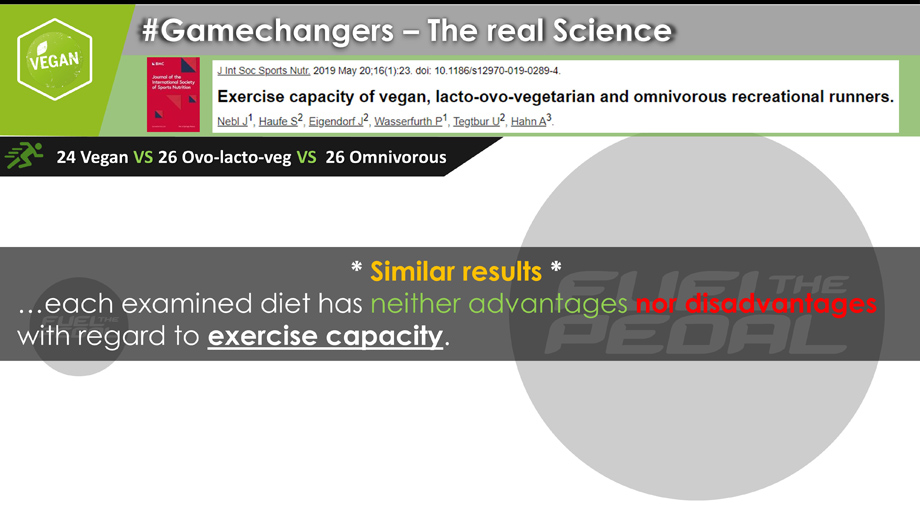 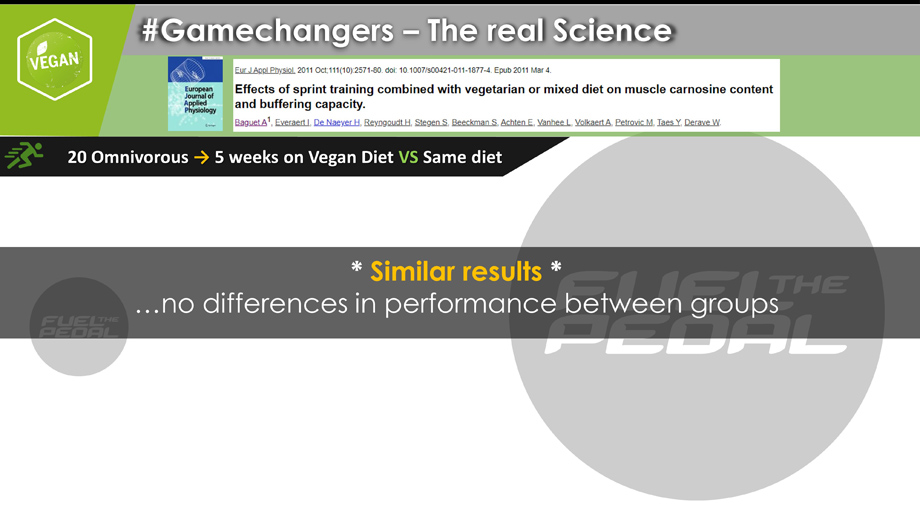 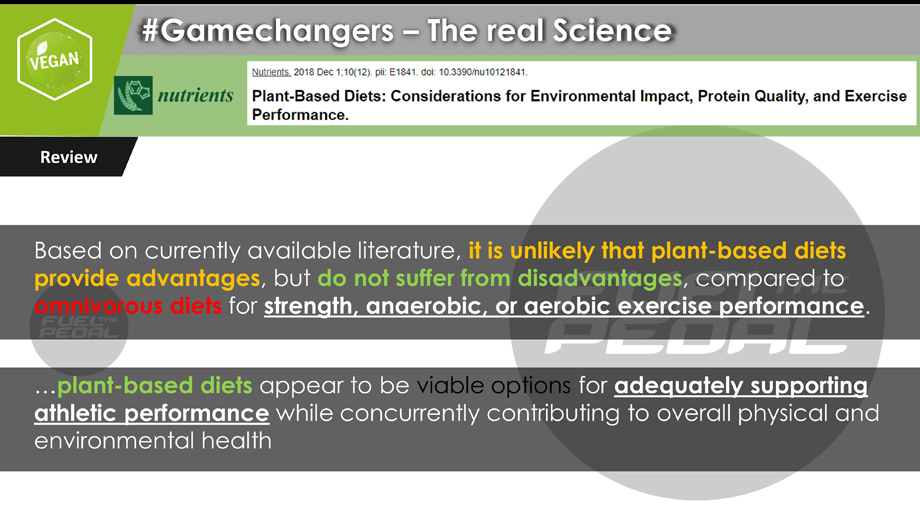 Summarizing… A well balanced plant-based/vegan/vegetarian diet appears to be similar to performance. However, I cant help to go beyond the cited research and allude to the higher risk of deficiency from the usual suspects: Iron, vitamin B12 – which occur predominantly meat and fish and although vegan advocates usually refer that there are plenty of plant-based foods rich in these micronutrients, bioavailability (the amount we actually absorb) is severely reduced both in iron and Vitamin B12 plant sources, in particular the famed Spirulina seaweed which appears to not even be bioavailable in mammals.

Apart from these, they also forgot to mention that vegetarian and vegan individuals appear to have reduced muscle creatine stores (here, here and here). Similar to muscle creatine levels, evidence also indicates that vegetarians have lower levels of muscle carnosine compared to omnivores (here and here) but we don’t know for sure the consequences that this may have for cyclists or any other athletes in the long run (although we could extrapolate just like they do on the documentary).

Relevance for today’s athletes/cyclists: A well planned plant-based diet by a trained sports nutritionist can support the athletes’ performance. But don’t expect that changing to a plant-based diet will make you a better athlete because there are plant-based diets who perform well. 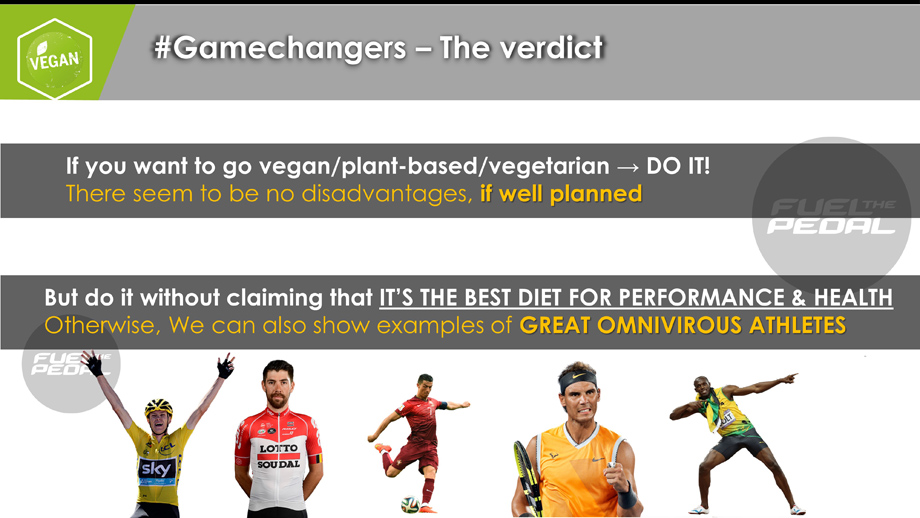 Is this a game changing resolution?
There are great vegan cyclists like Adam Hansen from Lotto-Soudal but there are also great cyclists like Chris Froome and Thomas De Gendt. In cycling, as in many endurance sports, nutrition is as a vital role in sustaining long-high intensity efforts and maximize recovery. While protein also plays a vital role in maintaining lean body mass, the decisive performance-related variables are mostly dependant on adequate carbohydrate provision which is independent of following an omnivore or a plant-based diet.